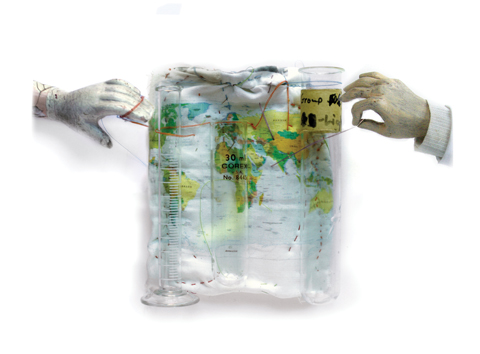 Unlike the physicists who developed the science of the atom bomb during the late 1930s, many scientists never witness the often devastating consequences and ethical implications of their research. Take the case of mining in the Democratic Republic of Congo: Shelby Layne ’13, a Spanish and Latin American cultures major, told the audience at a fall 2011 Barnard event that people of that nation have paid a severe price for the scientific and technological advances that turned its minerals into valuable commodities. Conflict minerals reside in many of our cell phones, laptops, and digital cameras—they’re what make a cell phone vibrate, she told an engrossed crowd at the Held Auditorium. But the militia who controls the mining industry, she explained, have inflicted brutal violence upon the Congolese people. Layne also said that advocacy groups are asking people to urge electronics companies to only use conflict-free minerals.

The event at which Layne spoke, Awareness Into Action 2, focused specifically on the environmental impact of some of the most important scientific and technological advances of recent times. The student-produced leadership panel also provided a glimpse of a new interdisciplinary academic minor at Barnard: science, policy, and ethics—part of the Science and Public Policy (SCPP) program—that is designed to prepare scientists, policymakers, and citizens for the moral challenges posed by scientific and technological advances.

Awareness Into Action 2 served as the culmination of Diane Dittrick’s “Environmental Leadership, Ethics & Action” course. Dittrick, who serves as senior associate in environmental science and co-director of the environmental science laboratory, designed the interdisciplinary seminar to focus on environmental issues and leadership development; theseminar includes an ethics component taught by religion professor Randall Balmer. The course focuses on environmental leadership development through real-time learning experiences using digital media as a teaching tool. Student research is blogged weekly on Columbia University’s edblog Web site as well as showcased on the Natural Resources Defense Council’s (NRDC) Web site OnEarth.org. Layne, who also introduced several other presentations, said that the mission of the class was to deepen students’ understanding of the human role in nature and its effects
on the earth’s ecosystem and biochemical cycles.

Physics professor Tim Halpin-Healy, who facilitates the new minor, opened the event by pointing to one of the most formidable challenges facing future generations: oil consumption. In a post-panel conversation he noted, “The bad news is that the global economy consumed about 1.2 trillion gallons of oil a year (equal to 1 cubic mile), and we only have 43 cubic miles of oil left. The good news is that we’ve got a bunch of bright young talents working on the solutions to our environmental problems.”

Among them is chemistry major Aliza Stein ’12, who explored biomimicry, the idea that nature has already addressed many of the problems contemporary society faces. For example, sharkskin, naturally resistant to bacteria, can be used on doorknobs and on hospital and school surfaces to prevent the spread of disease.

Anna Newman ’12, a biochemistry and education major, described how schools and community gardens are promoting environmental awareness. She talked about the potential for school gardens to address the problem of childhood obesity, and observed that when kids are planting their own food, it helps them think about how the food gets to their plate, and can inspire healthier eating habits.

Meanwhile, anthropology major Weyü Shameka Hodge ’13 built off an internship in Ecuador for her project on the abuses of petroleum extraction in disadvantaged communities. Hodge said that she’d never seen so much devastation in her life, and pointed out that the oil companies knocked down peoples’ houses to drill. Natives were dying of cancer due to contamination exposure, and they had no other place to work than for the very oil companies that were poisoning them.

In his closing remarks, Professor Halpin-Healy emphasized the importance of the interdisciplinary nature of Dittrick’s course. “It’s as much about ethics as it is about science,” he said. “My fear is that scientists going out in the field will come up against ethical dilemmas they’ve never faced or even thought about before. I hope this course and new minor will help prepare our students for the types of ethical challenges some of them are bound to face over the course of their careers.”

The science, policy, and ethics minor grew out of a $200,000 Science Education for Tomorrow grant Barnard received 12 years ago from the National Science Foundation. Halpin-Healy implemented and facilitated the grant, which called for finding talented, engaging faculty from a variety of disciplines who were committed to matters of science, policy and ethics and would collaborate on upper-level, team-taught, and small-scale interdisciplinary seminars.

One course the minor incorporated was Professor Emeritus of Biological Sciences Philip Ammirato’s “Genetics, Biodiversity and Society,” which he has offered almost every year since 1999. The course seeks to match scientists with economists and social scientists to explore the implications raised by plant biotechnology (the loss of old crop varieties in this time of modern agriculture, genetics and breeding) and genetic advances involving humans (stem cells, cloning, etc.). “The discussions try to seek some understanding of the biology behind the headlines, while appreciating the ramifications of such technological advances,” he says.

Students completing the minor must take two interdisciplinary seminars, one philosophy course, and two ethics-related courses. Halpin-Healy developed the program with science majors in mind, but students from a diverse range of majors have signed up for courses. “We draw broadly from a great constellation of majors, which is really fabulous,” he notes.

“Science & the State,” a course he taught in Spring 2011 with Professor of Political Science Richard Pious, provides a good example: The course roster included three physics majors and a few chemistry majors, along with students from environmental science, biology/neuroscience, political science, economics, history, and even a theatre-arts major. “The seminar was dominated by Barnard students, with a few Columbia kids in there for good measure,” Halpin-Healy said.

The Science and Public Policy program’s interdisciplinary nature leads to courses with fresh approaches to thoroughly studied scientific subjects. For example, Pious asks students to examine the ethical dimensions of critical decisions made by nuclear scientists or governmental policymakers. “Students see that science is not just about discovery in the physical world, but also about decision-making in the moral universe,” Pious said.

One of the most valuable aspects of the program may be its potential to bring together distinguished faculty and passionate students from many different corners of the Barnard campus. “Team-teaching within the SCPP program has been one of the most satisfying experiences in my 22-plus years at Barnard,” says Halpin-Healy. “It’s an extraordinary opportunity to cross departmental boundaries, and it epitomizes the great interdisciplinary endeavors that are possible at a premier small liberal-arts college such as Barnard.”