Back to Barnard: Alumnae Reconnect at Reunion 2018

The energy on campus was palpable as more than 1,500 alumnae and friends gathered for Reunion Weekend 2018. Generations of graduates marveled at the campus’s new landscape, soaked up the presentations and discussions, and reconnected with classmates. 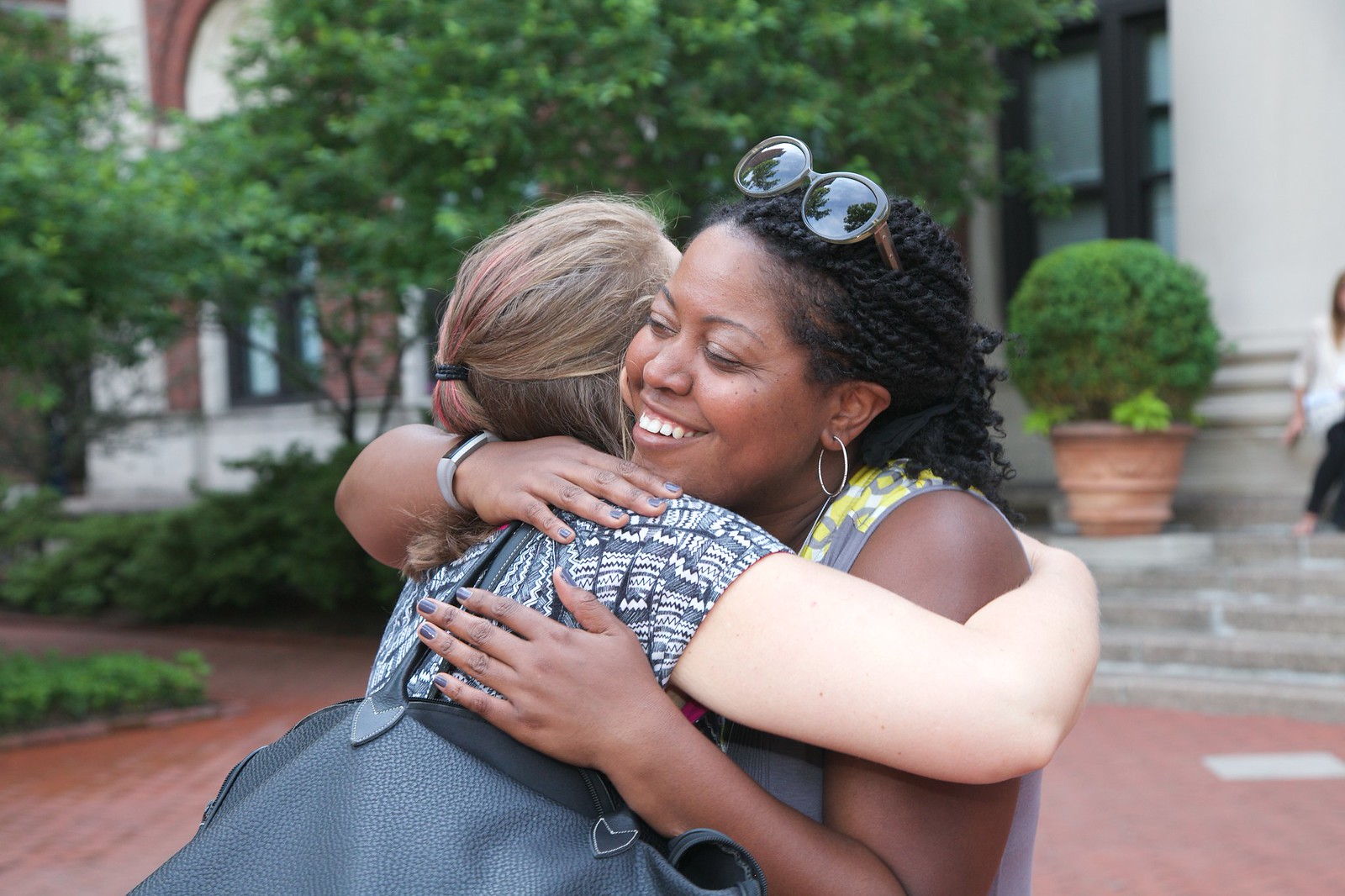 The energy on campus was palpable as more than 1,500 alumnae and friends gathered for Barnard Reunion 2018. Generations of graduates marveled at the campus’s new landscape, soaked up the presentations and discussions, and reconnected with classmates. Whether reflecting on the legacy of the 1968 era or sharing details of their lives over cookies and lemonade on the lawn, alumnae strengthened their bonds.

Intellectual curiosity remains constant in Barnard alumnae. On Friday afternoon, Assistant Professor of American Studies Manu Vimalassery was joined by Mabel Taylor ’18 and Emily Chu Ying He ’21 at a Faculty and Students in Conversation event sponsored by the Council on Diversity and Inclusion. Vimalassery discussed a chapter of his upcoming book, Empire’s Tracks: Indigenous Peoples, Racial Aliens, and the Transcontinental Railroad, focusing on how the Union Pacific Railroad was largely built by Chinese workers and traversed the lands of indigenous people. Vimalassery connected his research to his own background, sharing that he utilized his family’s personal historical perspective to see a counter-narrative to the Indian history that appears in many textbooks. Taylor added that when writing her senior thesis, she fully experienced how important it is to not accept one perspective at face value.

Vimalassery was inspired to see alumnae academically engaged. “As a Barnard faculty member, one of the things I say with real pride to my colleagues at other institutions is that I teach at a feminist institution of higher education,” he said. This brings to his work “a commitment to rigor and not just the superficial layer of inclusiveness.”

At the Alumnae Association of Barnard College (AABC) Annual Business Meeting and Awards Ceremony, Lori Hoepner ’94 presented the AABC Fellowships for Graduate Study, and AABC President Jyoti Menon ’01 and President Sian Leah Beilock presented the Awards for Service to Barnard to Lisa Lin ’98, Nancy Owen Rieger ’83, and Barnard Class of 1963. The Millicent Carey McIntosh Award for Feminism was given to Purva Panday Cullman ’98, and Joan Sherman Freilich ’63 and Susan N. Herman ’68 were recognized with Distinguished Alumna Awards. (Biographical information about the recipients of these awards is available online and will be featured in the Summer 2018 issue of Barnard Magazine.)

On Saturday, three alumnae participated in a storytelling event produced by the Peabody Award–winning organization The Moth, hosted by Amy Veltman ’89. Jami Bernard ’78, Elizabeth Freedman ’93, and Erica Jong ’63 spoke about how Barnard has had a lasting impact on their lives. Bernard shared that when she was editor-in-chief of the Barnard Bulletin, she went undercover for a story about the cult activities of Unification Church founder Sun Myung Moon. It proved to be a scary, humbling, and ultimately uplifting experience. Freedman spoke about how in her final semester she let go of preconceived notions and opened herself up to life’s possibilities by understanding she had the power to make great things happen.

Jong, for her part, came to Barnard planning to be a doctor, which was her form of rebellion against her bohemian parents, but after a damaging experience involving a fetal pig, she realized that science wasn’t her true calling. With the encouragement of a poetry professor and the love of her parents, she embraced her destiny. In recent years, she created the Erica Mann Jong Writing Center at Barnard and celebrates the writing “girlows”—refusing to call them fellows—as “brilliant young women.”

In addition to academic and cultural programming, each alumna had opportunities over the weekend to connect with the Beyond Barnard team to get support in their career goals, whether they are early in their career, an experienced professional, or somewhere in-between. On Friday, Christine Valenza Shin ’84, associate director for alumnae counseling and education, led a workshop about LinkedIn, provided personalized guidance during an open house, and with the Beyond Barnard team of career advisers met with alumnae for career advising appointments. On Saturday, alumnae Jami Bernard ’78, Elyssa Dole ’03, Elaine Schnall ’88, and Virginia Ryan ’83 participated in a panel discussion about their professional experiences. This standing-room-only event was moderated by Kris Ishibashi ’78.

Reunion came to a wonderful close with the Gala Dinner and Awards Ceremony. Tram Nguyen ’03, recipient of the Young Alumna Award, spoke of her deep and abiding love for Barnard. A political activist and founder of New Virginia Majority, she said her dream is to wake up every day and answer what democracy means to her.

The Woman of Achievement Award went to Lauren Graham ’88, the actress, writer, and producer. Being part of an a capella group at Barnard taught her the joy of being part of a team of diverse and dynamic women. Her memories of her time on campus, like those of so many other alumnae, are “gifts that continue to be part of my life.”