NEW YORK, June 20, 2016—Award-winning poet and playwright Claudia Rankine selected Brittany Perham’s, “Double Portrait,” for the 2016 Barnard Women Poets Prize. The book will be published in 2017 by W.W. Norton & Company. The prize is given for the best second collection of poems by an American woman poet and has been awarded nine times since 2003 when the collaboration between Women Poets at Barnard and W.W. Norton & Company first began.  In addition to having her collection of poems published, Perham will receive $1,500 and will give a reading at Barnard College upon publication of “Double Portrait” in the fall of 2017. 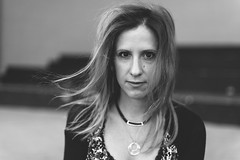 “‘Double Portrait,’ by turns playful, mournful, indulgent, musical, insightful, and all the way human, comes clean about our most driving desires. In the tradition of love poems to the beloved or the parent or the world, Brittany Perham takes exuberance to the forms that complement it. Imaginative and familiar, the result is full of humor that is both rueful and sensual,” Rankine, who judged the competition, said.

Perham is also the author of “The Curiosities” (Free Verse Editions, 2012), and a collaborative work with Kim Addonizio, “The Night Could Go in Either Direction” (Slapering Hol Press, 2016). In 2015, she was the recipient of the Stover Memorial Award given by “Southwest Review”. She is currently a Jones Lecturer in the Stanford Creative Writing Program and lives in San Francisco, California.

The Barnard Women Poets Prize seeks to support writers in the early stages of their careers, and is consistent with the College’s strong tradition in creative writing. Barnard College has long been known for producing leading authors including Zora Neale Hurston, Mary Gordon, Jhumpa Lahiri, Anna Quindlen, Ntozake Shange, Lydia Davis and Edwidge Danticat, to name a few.

About Barnard College
Founded in 1889, Barnard was the only college in New York City, and one of the few in the nation, where women could receive the same rigorous and challenging education available to men. Today, as the world-renowned liberal arts college for women at Columbia University, Barnard College remains devoted to empowering extraordinary women to become even more exceptional.

W.W. Norton & Company is the nation’s largest independent, employee-owned book publishing house.  Founded by William Warder Norton in 1923, the firm now publishes approximately 450 books annually in its combined divisions and continues to adhere to its original motto, “Books that Live,” striving to publish works of enduring distinction in the areas of nonfiction, fiction, poetry, and textbooks.