A host of projects confirms the College's commitment to new technology

Rebooting Computer Science CultureIn her senior year of high school in New Orleans, Jada Hawkins ’16 signed up for a computer science class. “I had no idea what it was,” she says. “I just thought the subject was interesting—the idea that you could make something just by typing.” However, Hawkins’s curiosity quickly turned to frustration. She was one of only three girls in the class, and the male teacher did not welcome them.“Why are you guys here? This is computer science, a man’s sport,” Hawkins recalls him saying. One girl dropped out, but Hawkins remained, enduring two semesters of inappropriate jokes and feeling excluded because of her gender. “It was just a rough, rough year,” she says. Though the sexism she faced nearly made her write off computer science altogether, her interest in the subject persisted.Now the junior is aiming to build an entirely new computer science culture— one in which women do belong—as one of the founders of a new web-design agency at Barnard. The Athena Digital Design Agency (ADDA) is a student-run start-up being developed by the Athena Center for Leadership Studies. Students learn how to create websites with HTML and CSS, as well as with JavaScript and Ruby programming languages, then have the opportunity to earn money designing websites for local small businesses. As a founder of ADDA, Hawkins wants to change the culture of computingand create a new generation of women who code. What’s more, she’s building a socially responsible business and becoming a leader and entrepreneur in the process.

TACKLING THE CULTURE OF “BROGRAMMING”

Hawkins’s high school experience is not uncommon, and more opportunity for women to learn programming is sorely needed, explains Kathryn Kolbert, the Constance Hess Williams ’66 Director of the Athena Center. “Coding has been very gendered,” she says.Even at the college level, women rarely find an easy path into computer science. “An alarming number of women at Barnard or Columbia who take an intro to computing class drop it within the first two weeks,” says Nathalie Molina Niño, who heads entrepreneurial programs at the Athena Center. That’s largely due to the male-dominated “brogrammer” coding culture, says Niño, who has a technology background. Computer science classes tend to be dominated by young men who have been hacking for years, learning jargon and inside jokes from other young men.Since Niño’s role at the center is supporting female entrepreneurs, she hit upon a way to address two major shortages—of women entrepreneurs and women computer scientists. The answer: launch a web-design business. “What if we do something like Barnard Bartending?” she asked. A long-standing, student-run campus business, Barnard Bartending teaches students how to mix drinks, then sets them up with bartending gigs. Niño wanted to follow that model: teach women to code and then put them to work. But the plan would only succeed if student founders took charge, Niño realized. “It had to be grassroots and it had to be supported by the students and ultimately run by the students.”That’s where Hawkins comes in. 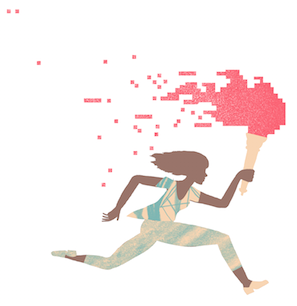 Shortly after arriving at Barnard as a freshman, Hawkins decided to give computer science a second try. In her sophomore year, when Niño presented

the opportunity for a leadership role at what would become the Athena Digital Design Agency, Hawkins jumped at it. The shape of the new business soon emerged: students could sign up to take three courses, each building on the previous one. They would learn HTML and CSS, JavaScript and jQuery, and Ruby on Rails. Students who met certain proficiency benchmarks would be able to join ADDA as staff coders and be hired to create websites for clients.Over 200 students signed up for ADDA’s first class last spring (40 got in), and the second course debuted in the fall. A second group (of 30) also got started in fall, with yet another (of 40) beginning in spring. This spring, the agency is offering all three courses for the first time, filling out its roster of qualified coders.The agency began accepting clients at the end of January. However, Hawkins and Niño have even more ambitious plans for its future. If ADDA can sustain itself at Barnard, the next step is to become a national franchise, with sister web-design agencies at campuses across the country.DESIGNING A BRIGHT FUTURE

By many measures, the Athena Digital Design Agency has already been a success. Dozens of women have learned to make basic websites. And not only is the program bringing more women to coding, it’s also “incredibly diverse,” Niño says; over 70 percent of participants are women of color.The group’s first paying client was the global girls’ education advocacy group the Malala Fund.

When the design agency is fully operational, it will serve the community around Barnard, building websites for small nonprofits and mom-and-pop shops that might not be able to afford a more established web-design agency. That sort of social responsibility is integral to the mission. Hawkins says she’s has no patience for tech entrepreneurs who make millions with dazzling products that do little to make the world a better place. She’s already working on a phone app to help prevent sexual abuse on college campuses.

Hawkins says she has come a long way from the frustration of her high school computing class. Not only has she chosen computer science as her major, she’s caught the social-entrepreneur bug as well. “I definitely want to code in the future, but I know that I really love the business side to things,” she says. “If it’s possible for me to combine the two, that would be amazing."

Library’s New Digital Collections Showcases Barnard’s HistoryBarnard’s Library recently launched the Barnard Digital Collections (digitalcollections.barnard.edu), a web- based resource of digitized archival materials reflecting the College’s legacy of excellence in women’s education. Featuring content from the Barnard Archives and Special Collections (archives.barnard.edu), the Digital Collections provide a glimpse into the history of women’s education and collegiate culture, 19th- and 20th- century struggles for women’s rights, and the history and development of Morningside Heights and NewYork City.“The Digital Collections make Barnard’s vibrant history more easily accessible to alumnae, the wider Barnard community, and researchers everywhere,” said Barnard’s digital archivist Martha Tenney, noting that the launch coincides with Barnard’s 125th anniversary, which is being celebrated with a variety of events and special projects throughout the 2014–2015 academic year.COLLECTION HIGHLIGHTS• A photography collection with images of the storied Greek Games, the Morningside Heights campus, and notable alumnae, all accessible using an advanced, open-source image viewer that allows for deep zooming and clear resolution, even on highly detailed images. Concurrent with the launch is the Digital Collections’ first exhibit, curated by Barnard librarian Heidi Winston. The exhibit comprises images of student participation in demonstrations and movements—from suffrage to Black Power to reproductive rights.• The Barnard Bulletin, Barnard’s weekly student newspaper (and later its student magazine), is digitized and searchable from 1901 through 2002 and reflects a century of student life, the Barnard curriculum and faculty, and events around the city and the country—such as the issue from February 25, 1965 that features an article on Malcolm X’s last speech, delivered at Barnard days before his assassination, alongside articles about a SNCC meeting at Columbia and the new student editor of the Bulletin.• The Mortarboard, Barnard’s yearbook, has also been digitized, documenting the changing population of students and providing a window into the activities and concerns of women’s college students over the course of the 20th century, often with hand- drawn illustrations. Barnard gratefully acknowledges Jessica Schwartz ’13 and the Schwartz family, whose donation made digitizing The Mortarboard possible. The site—a project of the Barnard Archives and Special Collections, which is part of the Barnard Library and Academic Information Services, in conjunction with Barnard College InformationTechnology—reflects the hard work of many people across Barnard’s community including digital archivist Martha Tenney, instructional applications developer Dillon Savage, and College archivist Shannon O’Neill, along with BCIT staff, archives fellows, and student staff. Special thanks are also due to former library dean Lisa Norberg for the vision and advocacy that pushed this initiative through.The Digital Collections employ the Islandora platform, an open-source software framework built on a base of Drupal, Fedora, and Solr. The contents will expand to include more of Barnard’s rich history and archival materials.

Digital Expression and the Caribbean

Members of the interdisciplinary Digital Black Atlantic Project took an unprecedented look at the dimensions of digital expression and its implications for the Caribbean and its diaspora during a first-of-its-kind Caribbean Digital Conference.The December conference explored approaches to developing projects and creating community in an increasingly digital academic environment.With a focus on the Caribbean and its diaspora, the gathering offered fertile ground for analyzing the intersection of information technologies with fields such as American studies, gender and sexuality studies, black studies, and communications, among others.The discussions were preceded by the Kamau Brathwaite “researchathon.” The event—launching an open-access, online bibliography of work by and on Caribbean intellectual Brathwaite— generated over 500 bibliographic contributions in just six hours.David Scott, Columbia anthropology professor and founder of the journal Small Axe, closed witha provocative reflection on the future of publishing.Organizers were Kaiama L. Glover, associate professor of French and Africana studies at Barnard; Kelly Baker Josephs, associate professor of English at York College, CUNY; and Alex Gil, digital scholarship coordinator and affiliate faculty in English and comparative studies at Columbia. The conference was generously supported by the Center for the Study of Social Difference at Columbia, Barnard’s Africana studies department, and the Committee on Online and On-Campus Learning (COOL).

Pres. Sian Leah Beilock on Why Education Institutions Have to Have Some Responsibility for an ROI