The Earthquake Observers: Disaster Science from Lisbon to Richter 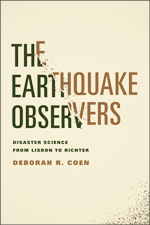 The University of Chicago Press, 2012

Earthquakes have taught us much about our planet’s hidden structure and the forces that have shaped it. This knowledge rests not only on the recordings of seismographs, but also on the observations of eyewitnesses to destruction. During the nineteenth century, a scientific description of an earthquake was built of stories—stories from as many people in as many situations as possible. Sometimes their stories told of fear and devastation, sometimes of wonder and excitement.

In The Earthquake Observers, Deborah R. Coen acquaints readers not only with the century’s most eloquent seismic commentators, including Alexander von Humboldt, Charles Darwin, Mark Twain, Charles Dickens, Karl Kraus, Ernst Mach, John Muir, and William James, but also with countless other citizen-observers, many of whom were women. Coen explains how observing networks transformed an instant of panic and confusion into a field for scientific research, turning earthquakes into natural experiments at the nexus of the physical and human sciences. Seismology abandoned this project of citizen science with the introduction of the Richter Scale in the 1930s, only to revive it in the twenty-first century in the face of new hazards and uncertainties. The Earthquake Observers tells the history of this interrupted dialogue between scientists and citizens about living with environmental risk.