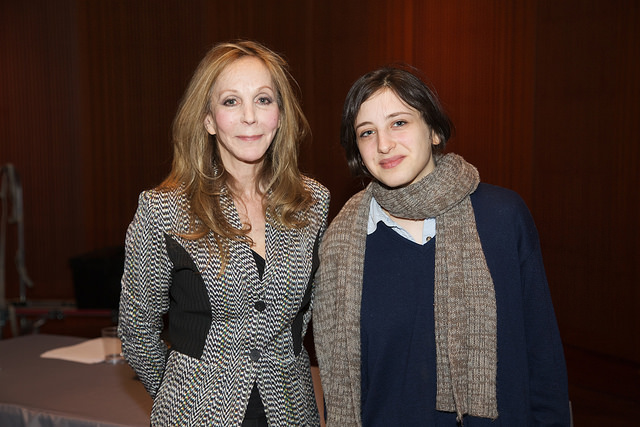 This semester, the acclaimed philosopher and novelist Rebecca Newberger Goldstein ’72, spoke at Barnard about the competing goals of the philosopher and the novelist. After graduating from Barnard, Goldstein earned a PhD in philosophy. She published her breakout novel, The Mind-Body Problem, in 1983, which achieved both critical and popular success. The author of several other award-winning books, Goldstein has received numerous honors including a “genius award” from the MacArthur Foundation. Her most recent book, Plato at the Googleplex, earned extensive praise from such outlets as The Wall Street Journal, which called it “felicitously written, impressively researched, insightful, important, entertaining, independent-minded, and glowing with intelligence.”

At the speech were several students in Barnard’s philosophy department, including Sera Schwarz ’15, a major in the subject, who writes below about Goldstein’s talk and her attempt to merge the two disciplines.

The Ancient Quarrel: Philosophy and Literature
by Sera Schwarz '15

Philosophers, as a class, have never held literature in particularly high regard. Already in the 4th century B.C., Plato insisted that an “ancient quarrel” would always rage between the philosopher and the poet: their respective aims, he argued, are not only essentially different, but essentially inconsistent. After all, while the philosopher pursues “true knowledge” of the way the world is, rather than the way it merely appears to be, the poet’s aim—or so, at least, Plato claims in the Republic—is to divert our attention from how things are to how they seem. What’s worse, the poet aims to achieve this by successfully affecting the affects of her readers; which is to say that her art is only successful to the degree that it simultaneously “nourishes the feelings...and impairs reason.”

But on the evening of March 23, Rebecca Newberger Goldstein ’72—who is herself both a professional philosopher and a prolific novelist—returned to her alma mater to pick a quarrel of her own with Plato's. Once on the stage of The Diana Center’s Event Oval, Goldstein wasted little time outlining the terms of the so-called “ancient quarrel." And she was as quick to concede that they were somewhat convincing. For one thing, the project of creative writers is, on Goldstein's reckoning, to project perspectives on profoundly “philosophical” subjects. In fact, in her view, all successful literary works will induce its readers to assume some such perspective on, among other things, the nature of reality, the self, suffering, or death.

And yet what Plato failed to recognize, Goldstein suggested, is that literary works are—if only in this respect—much more similar to philosophical works than they are different from them. After all, even the most persuasive philosophical arguments will "bottom out" at some juncture; and what invariably lies beneath them, Goldstein insisted, are “the individually variable intuitions that swell up out of our temperaments.” It is these “core intuitions” that supply us with our basic, and basically irreducible, cognitive orientations.  And that is to say that they are not only psychologically fundamental, but also epistemically fundamental; for we can only judge the reasonability of our other cognitive commitments (say, our beliefs, or our desires) by judging how well or how poorly they accord with our mode of regarding the world in general.

Goldstein then presented, by way of example, six methodological strategies that proceed from six very different philosophical temperaments: naturalizing, aestheticizing, theologizing, unsolving, reifying, and epistemologizing. Each of these strategies marks a distinct manner of responding to the empirically irresolvable questions with which philosophers are occupied; but they are manners of responding because they are, at bottom, grounded in no more (if also no less) than our individually variable intellectual mannerisms. Of course, it is precisely this individual variability that the creative writer—and also, if often unwittingly, the philosopher—is tasked with opening to her audience’s view. But the resultant work of literature, argues Goldstein, unlike most works of philosophy, will “call out the lie that there is a unanimity of points of view.”

The lecture was part of Barnard's 125th-anniversary lecture series. It was sponsored and organized by the philosophy department.