One for the History Books

In honor of Election Day next week, we’re taking a look back at our feature on Mae Yih ’51, who in 1976 became the first Chinese American elected to a state legislature anywhere in the United States.

Call 2018 the “Year of the Woman,” with 476 women candidates applying to run for a seat in the U.S. House of Representatives alone. National Public Radio has termed it a “wave.” The New York Times, a “surge.” But pushing for political power is nothing new to Mae Yih ’51, who made history 43 years ago when she became the first Chinese American elected to a state legislature anywhere in the United States by winning a seat in the Oregon House of Representatives, against a seven-term incumbent.

A Democrat who ran as a fiscal conservative, she was an underdog, to say the least. “The newspaper said, ‘Mae Yih’s chance of being elected is like a snowball in July,’ ” she remembers about that first race. Her district, about 75 miles south of Portland, in Albany, was only 0.9 percent Asian at the time. But a quote by Millicent Carey McIntosh (affectionately known as “Mrs. Mac”), Barnard’s dean from 1946 until 1952 (when she became the College’s president) spurred Yih on: “Use your education and be involved in the decision-making process for the benefit of your community.” For more than three decades, Mae Yih has done just that.

Life in the Republic

Born in Shanghai in 1928 to a family she describes as well-to-do, Yih, then known as Chih Feng Dunn, led a privileged life growing up. She was chauffeured daily to a private school and took horseback-riding lessons from a former Russian colonel.

But the China Yih grew up in was full of extremes. There was the Second Sino-Japanese War, World War II, and Chiang Kai-shek’s dictatorship. “The poor lived in huts and used manure for heating and cooking fuel,” she remembers. On the way to school, Yih passed frozen bodies wrapped in straw mats along the road “because people lacked burial money.” She recalls beggars and prostitutes on street corners and how one of her two older brothers was kidnapped once, and her father, three times.

Despite the abductions and the looming Communist Revolution, Yih’s trip to America, which ultimately springboarded her into history, wasn’t a planned escape. Her mother simply wanted to visit Yih’s brothers, who were studying in New York; Yih came along to translate. Unbeknownst to her, she would never live in China again.

Columbia’s then-president, Dwight D. Eisenhower, later to become president of the United States, gave scholarships to financially strapped Chinese students, enabling Yih to stay. “I finished the last year of Barnard with Eisenhower’s scholarship. So, I feel indebted to the American government,” she says. 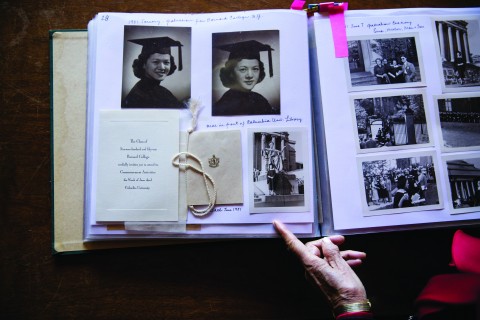 And to Dean McIntosh, who punctuated weekly student assemblies with her inspiring quote. “If it wasn’t for her message, I wouldn’t have become involved in schools and then in the legislature,” Yih muses.

Decades later, when Yih published her memoir, East Meets West, she donated its proceeds to the College. “I wanted to pay tribute to the place that inspired my journey into public service,” she says, drawing a direct connection between her Barnard years and her making of history. It was as simple as her understanding Dean McIntosh’s call and saying “yes.”

Three years after Yih married her husband, Stephen, at Riverside Church in 1953, the young couple moved to Albany, Oregon. They had two boys. And what eventually became her 26-year career in the Oregon legislature began, mundanely enough, with her fulfilling any request that her children’s teachers made. (Cookies? Yes! Field trip? Yes! Hot lunch program coordinator? Yes!) “I remembered Dean McIntosh’s words, and they would inspire me to be involved,” Yih recalls.

When she was asked to survey a school board meeting to gauge her interest in running for a vacant seat, she hesitated but went because of McIntosh’s inspiration. “They spent an hour on which lawnmower the school should buy but five minutes dismissing a teacher who I thought was the best in the school,” she remembers. “I went for the position because I was mad. And I won.” Yih served on Albany’s school boards for a total of 13 years.