Physics course decodes the world we see and don't see

(We are collecting the experiences of our alumnae and students who studied science at Barnard. What was your most memorable course or experience? Did a particular professor inspire you? Did you go on to pursue a career in the sciences? If so we want to hear from you. Please take a moment to leave us a comment at the end of this story. Please Note: The comments will not be published immediately.)

Reshmi Mukherjee, Barnard’s Helen Goodhart Altschul Professor of Physics and Astronomy, begins her introductory physics class with a discussion of so-called noctilucent clouds. These wisps of ice crystals, thought to be symptoms of climate change, appear in polar skies, and only at twilight. Though the sun has dipped below the horizon, its rays still reach the upper atmosphere, making the clouds shimmer and glow. Mukherjee’s question to her class: Exactly how high into the sky do these ghostly forms extend? By setting physics problems within the context of an atmospheric phenomenon linked to climate change, Mukherjee shows each new class of students how basic physics can help them approach complex scientific issues. She demonstrates how to use simple geometry to come up with an estimate of how high up the clouds are. 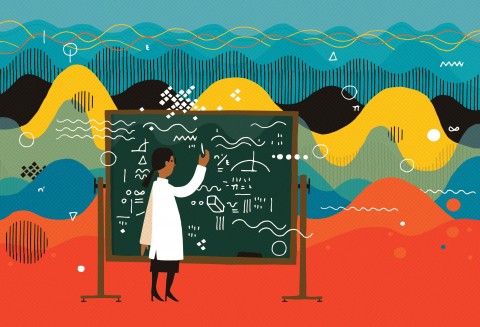 “In the last five years, many [students] have come into the course having already studied advanced math and advanced physics,” says the professor, who has taught introductory physics for the past 15 years. “In the past it was really an intro course. But that has changed.” New students who have taken advanced placement and honors physics in high school may have selected Barnard specifically for its strong programs in science. The physics and astronomy department at the College is intimate—with four professors and small class sizes, ensuring that students will receive close attention.

The Introduction to Physics course typically enrolls 45 students. The challenge, adds Mukherjee, lies in covering the basics while still engaging students who may already have encountered similar material. To meet it, she relies on a combination of old-school teaching tools combined with an exposure to cutting-edge research that is rarely available to undergraduates.

That’s quite the departure from her own undergraduate training at India’s University of Calcutta. “The material of introductory physics hasn’t changed,” says Mukherjee. “But the way it’s taught has.” Her undergraduate coursework involved a lot of memorization and the answering of questions based on theory. “The way I teach it, there’s a lot less memorization. It’s more about understanding and applying the material.”

Mukherjee makes frequent use of her blackboard, solving problems in chalk rather than using Web-based tools. She feels the common practice of using PowerPoint to teach problem solving can make the teaching process move too quickly. Writing out each problem slows the material down and helps the students find their footing in the science.

Throughout the course, she handpicks real-world problems from daily life, current scientific news, and her own research in high-energy astrophysics. Then, she uses those problems to frame fundamental lessons in kinematics and collisions, and the conservation of energy and gravitation. She introduces particle physics, for example, by telling students about the Large Hadron Collider, near Geneva, and scientists’ recent discovery of a Higgs Boson-like particle, which could lead to a discovery of how matter attains its mass. Research in particle physics and astrophysics, she notes, has spinoffs in technology and electronics development down the road.

Other problems lean towards the whimsical, like one that Mukherjee takes from Antoine De Saint-Exupéry’s The Little Prince. The lamplighter that the prince encounters on a small planet complains that in the past he only had to light the lamp and extinguish it every 12 hours, but now has to do so every minute. Using concepts of conservation laws in physics, the students are asked to compute the ratios of the past and present surface areas of this strange spinning planet to determine the cause of the lamplighter’s plight.

Mukherjee delves into astrophysics— her specialty—by explaining how researchers are using recently launched NASA satellites to study high-energy astrophysics, which probe the history and origins of the universe. Students interested in research might even get the chance to analyze data from these satellites as they continue their studies, thanks to a recent grant Mukherjee obtained from NASA. She knows that physics students often wait years before they can apply their knowledge to research. But regular reminders of how they can use what they’re studying give them a vivid picture of what’s possible in the field. Her pitch to students: Her generation won’t answer all the questions—it’s up to them to make the next moves forward.

In addition to her work in the classroom, Mukherjee heads Barnard’s VERITAS (Very Energetic Radiation Imaging Telescope Array System) group, which conducts research at an observatory about 50 miles south of Tucson, Ariz. At VERITAS, a collaboration of nearly 100 scientists and research students, an array of four telescopes captures the flash of light that high-energy gamma rays produce upon entering the earth’s upper atmosphere. The gamma rays themselves originate from a variety of sources: active galaxies thought to have black holes at their centers; spinning neutron stars called “pulsars” in our own galaxy; and even gamma-ray bursts that the group hopes to locate. “There are a lot of steps in the process,” Mukherjee says. “But we’re essentially looking at light. Not light from the sun, but light that is a billion times more energetic than sunlight.”

Every year, Mukherjee takes students from Barnard, Columbia, and other institutions to work at VERITAS. For the first time last summer, she took two dedicated first-year students to Arizona to work on an ongoing project funded by the National Science Foundation. There, current sophomores Gladys Velez- Caicedo and Florence Doval helped upgrade the telescopes’ sophisticated cameras. They also analyzed data from VERITAS and NASA satellites at Columbia’s Nevis Laboratories in Irvington, New York.

Whether students take Mukherjee’s course as a pre-med requirement, potential physics majors, or to fulfill their science requirement, they’ll emerge  understanding Newton’s laws, collisions, and momentum. They’ll also understand why they matter to the groundbreaking research changing the field today.

Did you go on to pursue a career in the sciences? If so we want to hear from you. Please take a moment to leave us a comment. (Note: The comments will not be published immediately.)