“A Place at the Heart of Campus”: Barnard College Formally Designates the Ellen V. Futter ’71 Field

Students, alumnae, and college administrators gathered on September 24, 2019, in the Altschul Atrium to celebrate the formal dedication of the Ellen V. Futter ’71 Field — known colloquially as Futter Field. The campus green space, which opened in tandem with the College’s new Milstein Center for Teaching and Learning in September 2018, is named in honor of the College’s ninth leader and fifth president.

In attendance was Ellen V. Futter, who is currently the president of the American Museum of Natural History. Futter was inaugurated as Barnard’s president in 1981, after serving as acting president for almost a year. At that time, she was the youngest person ever, at 31, to assume the presidency of a major American college.

“I owe a debt of gratitude to Ellen and the other wonderful leaders who came before me and paved the way,” said President Sian Leah Beilock, who is beginning her third year as president of Barnard. “Thank you for your stellar contributions to our college and our city — we can assure you that Futter Field, like you, will continue to be a vital part of our community for a very long time to come.”

“Barnard made me who I am today, and I will be forever grateful for what it gave me,” Futter said in her remarks. “Grateful for the great privilege of serving as president, grateful now and forever as a loyal alum, and, of course, for this recognition and place at the heart of the campus, which mirrors the College’s place in my heart.” 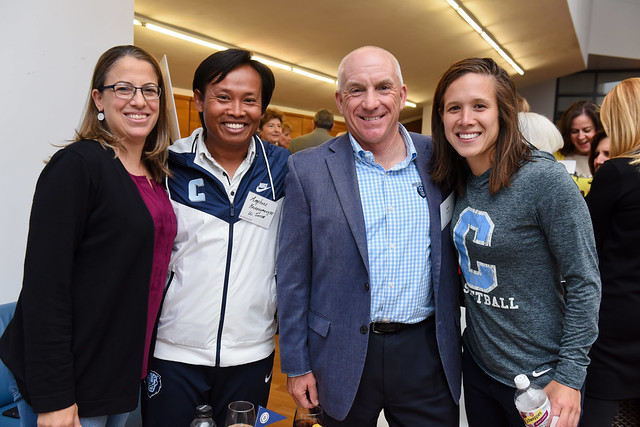 Several initiatives that Futter enacted as president remain integral to the College and its vision. Chiefly, she took great care to preserve Barnard’s institutional independence when Columbia College announced that it would begin to admit women in 1983. Barnard community members feared that, even if a merger was avoided, coeducation at Columbia College would make Barnard redundant. It was through Futter’s determined leadership in the following decade that Barnard was able to regain its status as a competitive educational institution after an initial decline in enrollment following Columbia’s landmark decision.

The College also owes the existence of the Columbia-Barnard Athletics Consortium to Futter. She was instrumental in creating the consortium, which allows Barnard students to compete on Columbia University athletic teams, making Barnard the only women’s college in the country to offer NCAA Division I athletics to its students. The consortium celebrated its 35th anniversary this year.