Colleagues, students and friends of Prof. Nepomnyashchy are invited to share their thoughts and memories 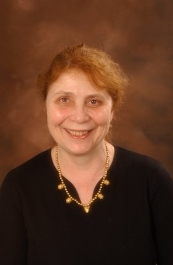 The Barnard community is deeply saddened by the recent death of Catharine Nepomnyashchy, a cherished member of our faculty in the Slavic Department and a truly extraordinary teacher and scholar.
Colleagues, students and friends of Prof. Nepomnyashchy are invited to share their thoughts and memories here.
What follows is a message from Provost Linda Bell, recalling Prof. Nepomnyashchy's distinguished career and inspiring presence on this campus and beyond.

Dear Members of the Barnard Community,

It is with tremendous sadness and a very heavy heart that I write to inform you of the death of Catharine Nepomnyashchy, a much beloved member of our faculty for twenty-eight years. Cathy died Saturday morning in her home after a courageous battle with lung cancer. She is survived by her beautiful and loving daughter, Olga Nepomnyashchy, her brother, James Theimer, and her mother, Jo-Anne Theimer. Her husband, Slava Nepomnyashchy, who she met as a teenager in the summer of 1970 on her first trip to the Soviet Union, passed away in 2011.

Cathy, the Ann Whitney Olin Professor of Russian Literature and Culture and Chair of the Slavic Department, joined Barnard's faculty in 1987. In addition to her teaching duties for the Slavic Department, for which she was renowned for an inclusive and engaging classroom, she was affiliated with Barnard's Comparative Literature Program and Human Rights Program. She also served on the Executive Committee of the Harriman Institute at Columbia University.

Cathy’s research and teaching interests were as fascinating as she was—twentieth- and twenty-first-century Russian literature and popular culture, Russian women's studies, and the works of Alexander Pushkin, Andrei Sinyavsky, and Vladimir Nabokov. She approached these subjects with true passion and devotion, and her love of Russia and its history were boundless.

She was the author of many books including Abram Tertz and the Poetics of Crime; Strolls with Pushkin, which she translated with Slava Yastremski and for which she wrote the introduction; Under the Sky of My Africa: Alexander Pushkin and Blackness, which she edited with Nicole Svobodny and Ludmilla Trigos; and Mapping the Feminine: Russian Women and Cultural Difference, which she edited with Irina Reyfman and Hilde Hoogenboom. Cathy also published extensively on Soviet and post-Soviet literature and popular culture, Pushkin, Russian ballet, Russian émigré literature and culture, and the future of regional studies. At the time of her death, Cathy was working on a book entitled Nabokov and His Enemies: Terms of Engagement.

Cathy served as Director of the Harriman Institute, Columbia University, from 2001 to 2009 (the first woman to hold that position) and was honored as the Institute’s 2012 Alumna of the Year. As Director, Cathy was credited with broadening faculty engagement in the Harriman Institute by expanding its scope of activities to arts, literature, and culture, and in deepening its connections to Central Asia and the Caucases. In addition, she served as President of the American Association of Teachers of Slavic and East European Language (AATSEEL), as well as on the Advisory Council of the Kennan Institute and on the Board of Directors of the American Association for the Advancement of Slavic Studies. She chaired the Executive Committee of the Slavic Division of the Modern Language Association and served on the editorial boards of Slavic Review, Novyi zhurnal, and La Revue Russe. In 2011, she received the AATSEEL’s Award for Outstanding Service to the Profession.

Above all, Professor Catharine Nepomnyashchy was a true Barnard treasure. She was an inspiration to countless students and an example to her colleagues. She knew how to find joy and excitement in any situation, and loved being part of, and central to, the action. People were drawn to her for good reason—for her energy, enthusiasm, and commitment to leading the fullest possible life, unencumbered by convention. Her smile could fill any room, and she continued to smile even as her name was, repeatedly and with all good intent, being constantly misspelled.

We are deeply saddened by this loss and know that Cathy will be dearly missed. It was Pushkin who said, “The illusion which exalts us is dearer to us than ten thousand truths,” and for now we will let ourselves imagine that Cathy is still very much here at Barnard—her smile and enthusiasm pushing us, as always, forward.

Please note that funeral details, as well as information on a Memorial Service at Barnard, will be forthcoming.

My very best,
Linda Bell, Provost and Dean of the Faculty