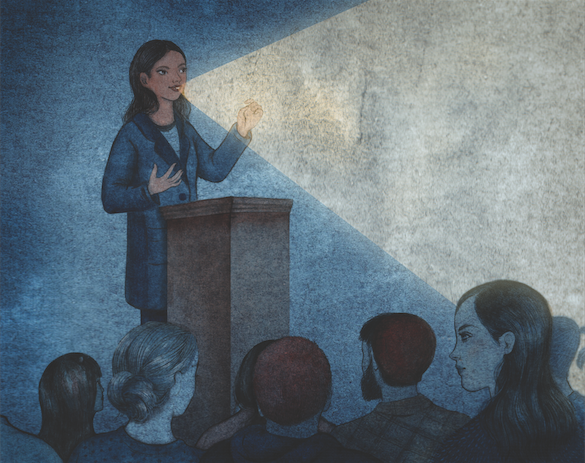 The tendency to speak out and speak up in any venue—from classrooms to corporate boardrooms—is often attributed to the “Barnard DNA,” and helping students sharpen their communication skills has long been the purview of the Speaking Fellows Program. For the second year in a row, the program staged the Cicero Speech Contest, a fun but competitive event that offers students an opportunity to develop the confidence and skills for successful public speaking.

“We realized that the speaking program really lends itself to having events and contests,” says Daniela Kempf, its manager. “The competition is a way to provide students with a venue to engage each other with ideas in the public sphere.” Adds Kempf, “It also offers another opportunity to promote a culture in which speaking becomes a form of intellectual expression and a powerful tool for advocacy; where speaking well is valued, evaluated, and rewarded; where students use such opportunities as platforms to voice issues that matter to them and affect real change.”

In the most recent Cicero Speech Contest, held in November in the James Room, 13 contestants each participated in one of the two categories, persuasive advocacy and impromptu speaking. Those who competed in persuasive advocacy had prepared to discourse on a variety of topics, ranging from eating disorders and mental health to the Tibetan conflict and the African diaspora. Those who braved the impromptu competition were given the topic “well-behaved women seldom make history,” with only 30 minutes to reflect on their talk before facing the audience.

Providing challenges such as the Cicero Speech Contest to fledgling speakers is especially important, says Kempf, because all too often, “whenever a public venue is open to all, women self-sabotage and elect not to do it.” By contrast, participation in events such as the Cicero Speech Contest is “empowering, when they get a little bit of opportunity and a lot of practice. They can do a great job, and be very powerful and persuasive. It’s a way to step up to the podium.”

Students who participated say they didn’t let their nerves or anxieties get in the way. “This is really useful, but most people are scared,” says Paymaneh Parhami ’16, a political science major and chemistry minor, who won first place in persuasive advocacy for her presentation on men’s roles in the feminist movement. “If you stop using these skills, they might go away. I wasn’t expecting to win.” Parhami had done a substantial amount of public speaking as a high school student in West Chester, a Philadelphia suburb, even winning a speaking competition as a freshman.

Becky Santora ’15, an anthropology major who’s also earning a degree from the Jewish Theological Seminary, took second place in the persuasive advocacy category for her remarks about human rights in Tibet. The Highland Park, N.J., native, who had taken a public speaking class with Kempf, entered the contest because, she says, “I wanted to practice on a larger scale. I gained so much confidence in being able to speak confidently and to speak my opinion.”

And Rathna Ramanathan ’18, from Clarkstown, N.Y., captured first prize in the impromptu category for her comparison of her own social subversion with that of Jane Austen’s fictional creation, Elizabeth Bennet of Pride and Prejudice, who prioritized happiness over security. “I just wanted to go for it,” says Ramanathan. “It was more about the experience than the competition.” She credited her preparation with some of the speaking fellows for helping her to unexpected victory. “I wasn’t sure how I would do,” she says. “What I definitely gained was confidence and clarity.”

And that’s precisely the point, says Kempf. “I want students to understand how important it is to be skilled in public speaking.The Cicero Speech Contest is another venue for public speaking in the academic environment. It’s ultimately about thinking and ideas. Eloquence and delivery are just the icing on the cake.”

Pres. Sian Leah Beilock on How to Open the STEM Pipeline