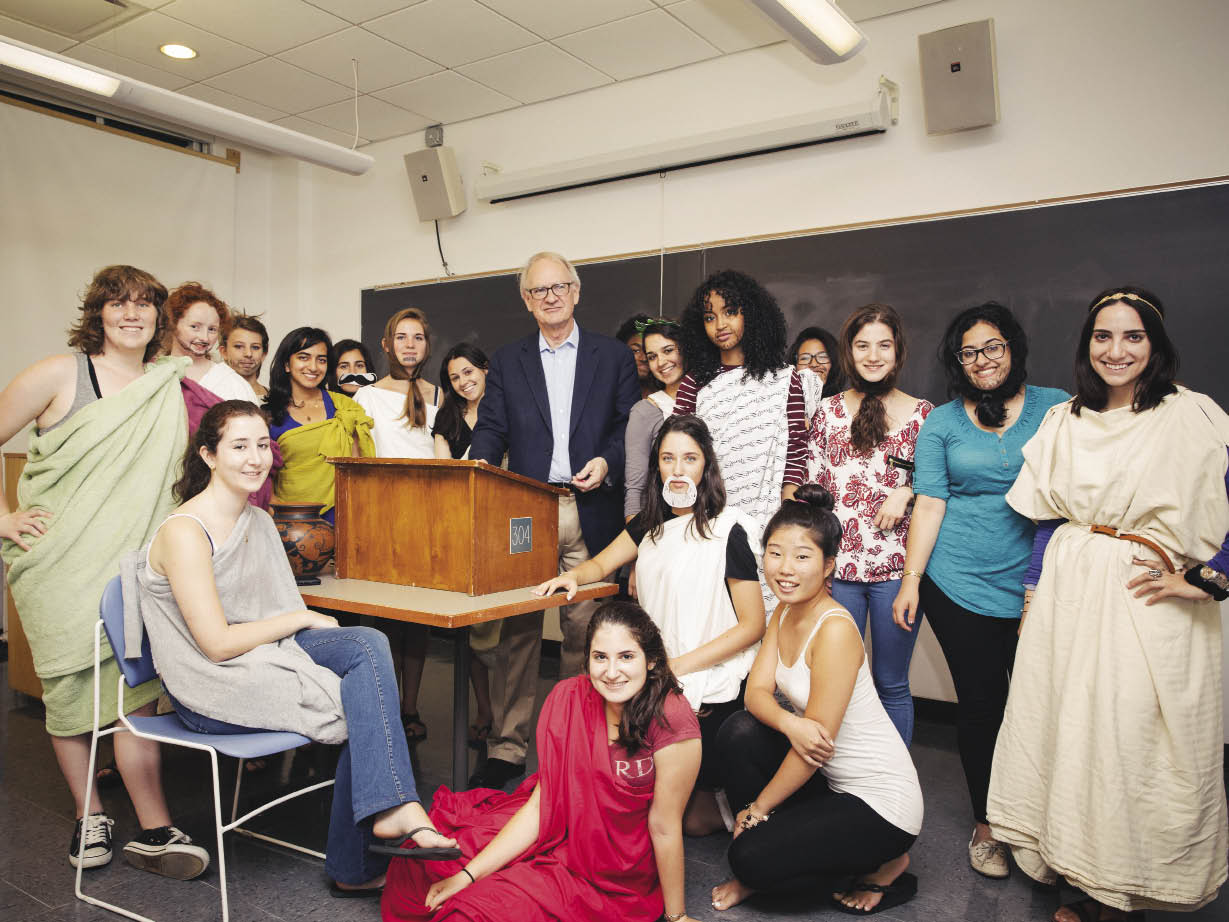 It’s just before 1 p.m. on the second floor of Milbank Hall and students are rushing to put the final touches on their costumes as they prepare to portray Athenians during the starvation winter of 405–404 B.C. But these students are not traditional actors. They’re participating in a different type of classroom experience known as Reacting to the Past (RTTP). The brainchild of history professor Mark Carnes, RTTP foregoes the traditional lecture format, instead asking students to take on the personas of historical characters in elaborate games that allow them to gain a more thorough understanding of the issues and conflicts of a given time period.

Carnes says RTTP produces students who become passionate about the material. “Reacting to the Past not only engages students, but it taps into their world of social competition, motivating them to work harder to engage with important texts and to prepare solid arguments,” he says.

The curriculum is demanding. In addition to reading classical texts like Plato’s Republic for the Athens game, students must read hundreds of pages of historical documents and essays and write several papers for each game. Grading is based on the papers, as well as the student’s ability to bring her character’s point of view to light in the classroom. RTTP also encourages teamwork, as students are often divided into factions, with members dependent upon each other to win their case. “The game becomes a part of their life, not just a class they take for credit,” Carnes explains.

In “The Threshold of Democracy: Athens in 403 B.C.,” student Athenians debate whether Athens should surrender to Sparta. Carnes sits in the back, more an observer than a teacher, only speaking to help move the game along. Carnes asks this writer from Barnard Magazine to join the game as an Athenian. After dying of starvation, I am sent from the room with an envelope containing a new role as a Spartan king, charged with deciding the fate of the Athenians who surrendered.

The exercise is what’s known as a micro-game, designed to set the scene for what will follow: the roughly month-long Reacting game. The Athenian scenario is one of 12 published games played in about 350 colleges and universities around the world, ranging from Ivy League schools to community colleges. The games are even used in graduate programs, senior centers, and a few prisons, and reenact such historical events as the trial of Socrates, the French Revolution, and the women’s suffrage movement in turn-of-the-century New York City. “There are over 150 games in various stages of development,” says Jennifer Worth, membership and outreach manager at the nonprofit Reacting Consortium, an organization of about 50 colleges that pay dues to sustain Reacting programming. “We hope to publish three more scenarios in the coming year.”

It all began after what Carnes calls “one failed class in December 1995.” Soon after, he experimented with making the classroom more compelling; he told the students in his first-year seminar they would not just discuss the readings, but would instead play three games that semester. The concept took on new life after two students, assigned roles as rulers of a game set during the Ming dynasty, threatened to “exile” those students who failed to abide by Ming rules of etiquette and behavior. “When students took charge of the class, the debates became deeper and richer,” he recalls. The students unknowingly laid the foundation for a new type of student-run learning experience that hundreds of scholars eventually transformed into the Reacting movement. “Back in 1996, I just wanted a more stimulating classroom experience for myself as much as for my students. I never could have imagined that this simple idea would catch fire and spread.”

RTTP is now used by other professors at Barnard, like senior lecturer in French Laurie J. Postlewate, who started teaching RTTP in the first-year seminar in the fall of 2005. “Reacting to the Past is a very interdisciplinary approach that can incorporate visual art, music, and other elements into discussions of social history, politics and philosophy,” she says. “The games not only deal with the history, they teach public speaking and listening skills, and reinforce the importance of teamwork.” This year, Postlewate served as a gamemaster during the Annual Faculty Institute, the consortium’s largest annual event.

While the Reacting Consortium is supported by member dues, the event is based at Barnard, with the College providing space and administrative support. The College also hosts the Annual Faculty Institute, which takes place each summer on campus and gathers faculty and administrators from across the country to practice playing the games and exchange tips and techniques for enhancing the classroom experience.

Attending last summer’s program was Jeffrey Hyson, assistant professor of history at Saint Joseph’s University in Philadelphia. “The institute is a great opportunity for those new to Reacting to learn how to teach it, and it’s a chance for old hands like myself to try out other games that I might want to use in my classroom,” he says. He took part in the “Mexico in Revolution, 1911–1920” game, playing the part of President Francisco Madero, assassinated in 1913. “As a character, it is a little unsettling to find yourself thrown into an unfamiliar situation where you are fighting for your life,” observes Hyson.

Jennifer Jung-Kim ’89, lecturer in Korean history and East Asian studies at UCLA, has been using RTTP games since she attended the summer institute in 2007. “I started off using the China and India games when I was teaching East Asian history at Occidental College in 2007 and 2008,” recalls Jung-Kim. “The students were much more engaged. Even students who were often reluctant to speak up did so in the game because they were not speaking as themselves but as different people.” She currently teaches the “Greenwich Village, 1913: Suffrage, Labor, and the New Woman” game as well as “Korea at the Crossroads of Civilizations: Confucianism, Westernization, and the 1894 Kabo Reforms,” which she developed with UCLA professor John Duncan, codirector of the Center for Korean Studies.

Carnes’s original theory—that turning the classroom into a living theatre would keep students engaged—is borne out across campus by countless students. Among them is Jamie Lerner-Brecher ’17, who took two RTTP classes with Carnes during her freshman year, and now works for the consortium. She says RTTP games make students invest in the material. “If you read a text, you are reading it from the perspective of your character and are trying to pull out as much information as you can to make your arguments as that character,” explains Lerner-Brecher, who is majoring in American studies and music. “It also provides you with an automatic group of friends, since Professor Carnes asks you to interact with your teammates and opponents outside of the classroom as part of the exercise.”

Meital Sapir ’17 says RTTP introduced her to a new way of learning. “[It] allows us to simultaneously learn history while developing confidence speaking and working independently…. Professor Carnes challenged us to advertise our political party, which in my case was the radical Democrats,” she recalls of her first-year course. “My teammates and I created posters and put them up all over campus. When I was in the dining hall and saw people from the opposite faction, I even considered whether I should talk to them as Meital or put on my Thrasybulus game face. It was fully encompassing.” Adds Sapir, “We found our voices during our first year in college because of this class and we had a lot of fun in the process.”

Carnes recently published a book based on interviews with students and faculty about Reacting, as well as his own personal experiences teaching the role-immersion methodology. In his book, Minds on Fire: How Role Immersion Games Transform College (Harvard University Press, 2014), he discusses the events leading up to that first seminar and how the class eventually led to the widespread use of Reacting to the Past games.

Carnes explains that as he pondered a student statement that “all classes are sorta boring,” he realized that this was a common frustration expressed by scholars for almost two centuries. He cites Harvard philosopher George Santayana who once said that students and teachers were “animals of different species…periodic contributions could pass between them, but not conversation.”

In direct contradiction to this idea, Carnes opens with a story about a group of students who ask their professor if their 8 a.m. class could begin 30 minutes earlier to allow a Reacting to the Past game to play out in its entirety before the end of the semester.

The book has garnered praise from such education experts as James M. Lang at The Chronicle of Higher Education , who wrote, “If we are willing to open our minds and explore student-centered approaches like Reacting, we might just find that the spark of student engagement we have been searching for in higher education’s mythical past can catch fire in the classrooms of the present.”

University of Richmond Chancellor Richard L. Morrill said, “Every professor who wrestles with finding ways to bring more vitality to the classroom will find Minds on Fire to be disarmingly honest, with insights that invite a serious consideration of role-immersion games.” •