Barnard is building a “circular campus”: a holistic, systems-based framework designed to reduce emissions, waste, and costs, transform consumption patterns on campus, increase access and affordability for students, and support the transition to a just, sustainable economy.

In collaboration with multiple partners Barnard has created a Circular Campus framework with five main areas of focus: 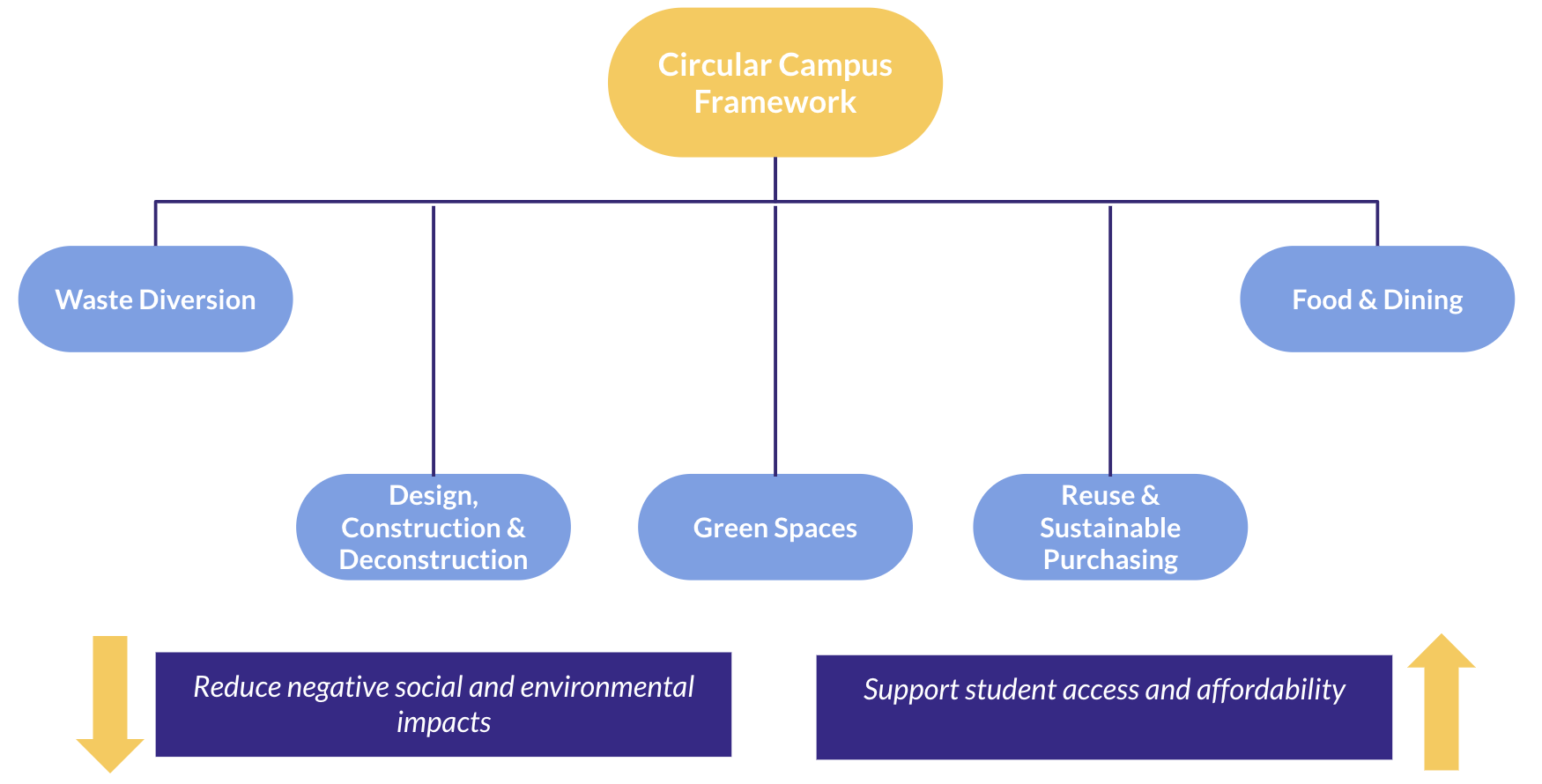 According to the Intergovernmental Panel on Climate Change (IPCC), switching to renewable energy can only reduce our collective greenhouse gas emissions by 55%. The remaining percentage of emissions comes from the way in which we make, use, and dispose of products and food. Such emissions can be addressed by replacing our linear model of production and consumption with a regenerative model in which materials and products are reclaimed, repaired, and re-introduced into the production of “new” goods. These closed-loop systems are referred to as ‘circular economy’ solutions. This pattern holds true at the campus scale: in 2016, we found that Scope 3 emissions - from food, purchases, travel, and waste, for example - were responsible for at least 59% of Barnard’s total emissions.

Higher education has an opportunity to accelerate the transition to a just and circular economy, a vital part of any global response to climate change. Universities and Colleges have a significant capacity to influence behaviors through teaching, research, management, and purchasing power. These characteristics create a unique opportunity to develop and test circular economy strategies, especially in the context of environmental justice.

In light of COVID-19 and the recent events across the country, our community will need to come together to find a way to rebuild sustainably and equitably. We believe that circular economy strategies are one way to begin to address and dismantle environmental racism by creating more equitable systems of consumption, on our own campus and in collaboration with our local community. 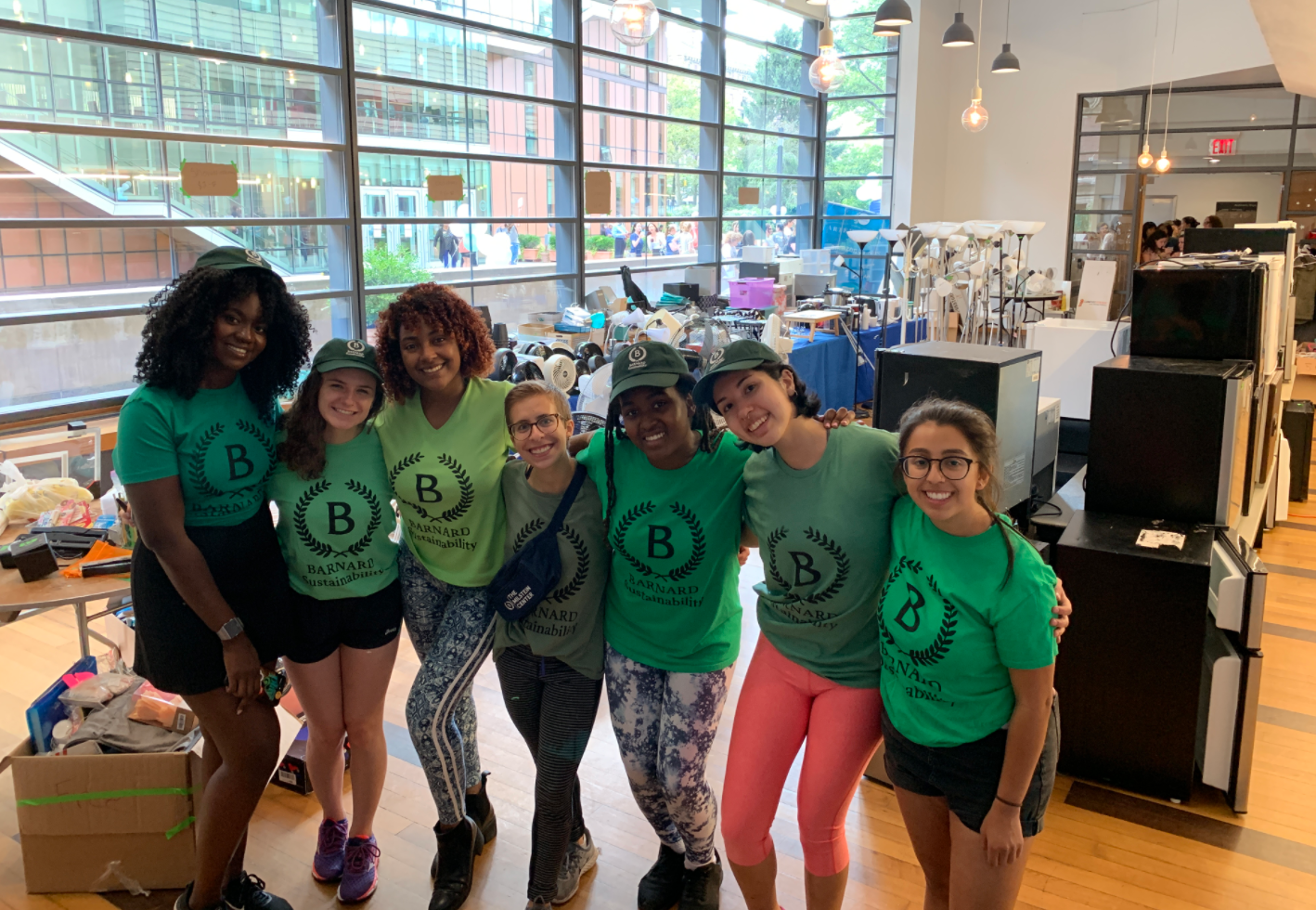 More about Circularity at Barnard

These three examples represent circularity in different arenas and at different scales. Together, they illustrate how a circular framework can be a powerful tool for reducing waste and emissions, and for addressing issues of community, equity, and justice.

Reuse Ecosystems: In 2020 Barnard began piloting with Rheaply, a digital peer-to-peer internal reuse platform, and officially launched on campus in the fall of 2021. Rheaply provides a digital platform for faculty, students, and staff to exchange supplies and materials, and allows the College to track metrics on these exchanges, making the invisible circular ecosystem more measurable.

In the first month of Rheaply’s campus platform in the fall semester of 2021, the number of users has increased sixfold, from 100 initial users onboarded during the pilot period to over 600. In the first 8 weeks of the 2021 fall semester, Barnard’s Rheaply site hosted over 300 exchanges between community members; the total value of these exchanges was $15,631, and 1.1 tons of waste were diverted from landfills.

Barnard and Rheaply are actively working to extend the Barnard exchange ecosystem to include our neighbors, including Columbia University, local community organizations, and local arts organizations.

Design, Construction, and Deconstruction: In 2020-2021, Barnard launched a major renovation of Altschul Hall, Barnard's 126,000 square-foot science building. Redesigning the built-in 1969 building will be a significant step towards decarbonizing campus energy systems and is a necessary step towards net-zero emissions. A circular approach will also significantly reduce the impact of the renovation itself.  According to the Institute for Market Transformation, retrofitting can save up to 75% of a construction project's embodied carbon. A project on the scale of Altschul, built with all-new materials, could represent as much as 52,000 tons of carbon consumption. Given the scale of the project and the potential savings across all three Scopes, Barnard developed a set of “Design, Construction, and Deconstruction Guiding Principles” to serve as a sustainability guideline for the project.

Circularity & Wage Equity: Circular strategies can have significant co-benefits; in addition to reducing emissions, waste,  and costs, circular strategies can support access and equity goals. To cite one example, the Department of Theater at Barnard began prioritizing and tracking reuse. A show built with roughly 50% used materials, with a $7,000 materials budget, was found to be responsible for the equivalent of emissions from one American home for 6 months. Building the show entirely out of used materials would cut emissions by as much as 75%, and building ‘all new’ would have doubled emissions. By increasing the percentage of reused materials over time (from about 50% in 2016 to 68% in 2019), the department was able to reallocate that money to better compensate those undertaking the labor needed to source used items. Since 2016 the department has raised design fees by 58% and prop artisan compensation by about 70%. The reallocation of funds formerly spent on new materials constituted 60% of the increase. Once the production team began ‘spending money on people, not stuff,’ advocating for increased fees and prioritizing the artists involved in circular practices, it became easier to reallocate departmental funding for artist compensation, a major equity issue in the American theatre.

In partnership with Rheaply and the Morningside Area Alliance, we are expanding our circularity ecosystem to include our neighbors. In building a sharing economy, a rich local network of involved organizations allows for more resources to be shared and loaned, building connection and resilience.