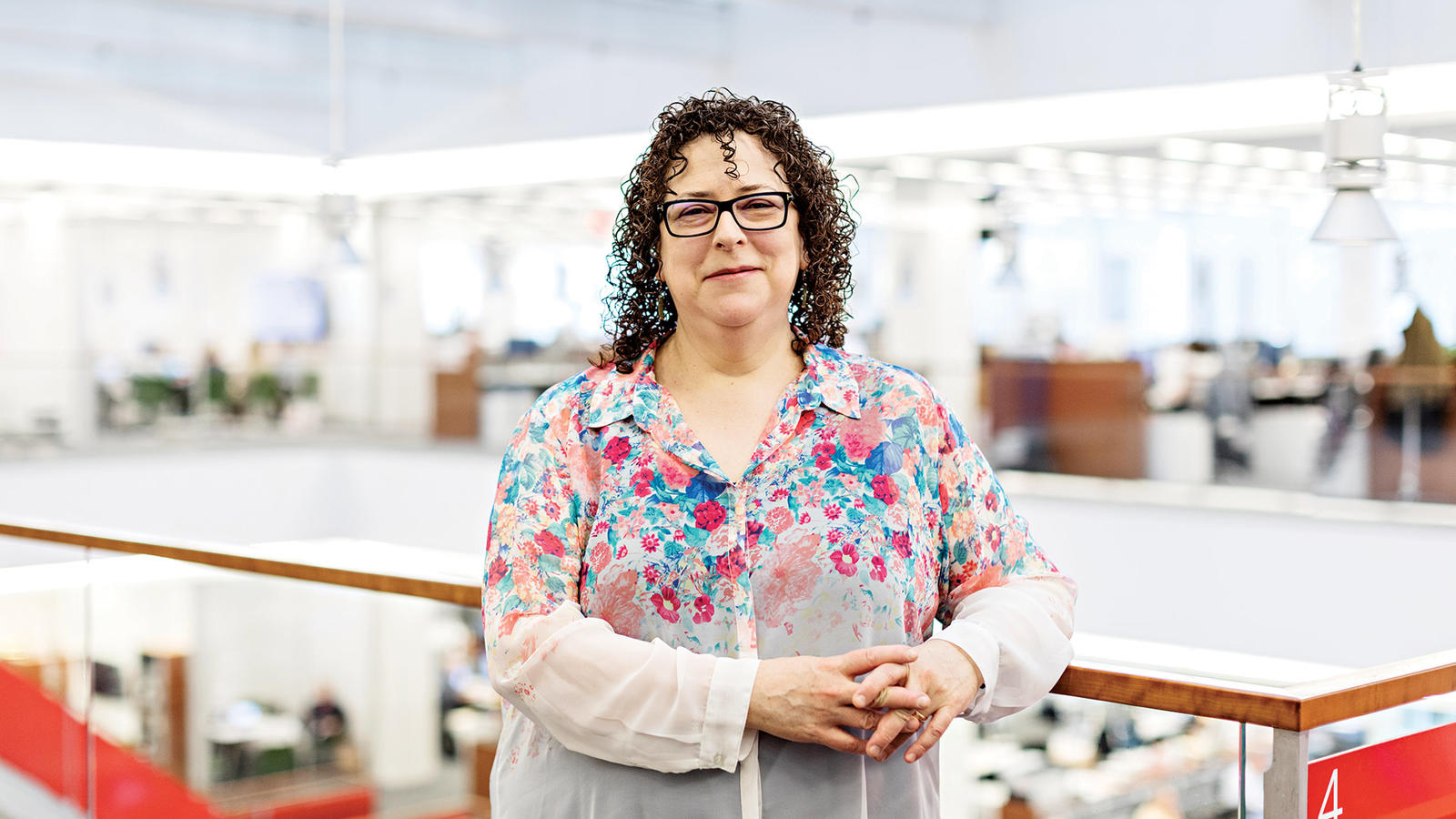 “For this obituary writer, the end has come.” So wrote Margalit Fox ’83 in a June 2018 essay in The New York Times. “I don’t mean, thankfully...the ‘end’ I’ve written about in more than 1,400 obituaries,” she explained to her bevy of relieved readers. “I mean the end of my career at this newspaper.” Maybe they weren’t so relieved after all.

For fans of her work, and there are many—Commentary has called her “The Artist of the Obituary” and The Paris Review “an instrumental figure in pushing the obituary past Victorian-era formal constraints”—the news landed, much like a Sunday paper in our turbulent age, with a deep and disheartening thud. But for Fox, the decision to leave The Times after fourteen years at the obit desk is a relief of sorts. In “what may be the most foolhardy decision of a foolhardy life,” she wrote, “I’ve decided to pursue a long-held dream of writing books exclusively.” (Her newest one was released this June: Conan Doyle for the Defense: The True Story of a Sensational British Murder, a Quest for Justice, and the World’s Most Famous Detective Writer.)

“With three books now written in parallel to working full-time for The Times,” she says with delight, “I should be able to turn a book around in two years instead of the five or six” it used to take her. That’s good news for book readers. And, thankfully, her obituary fans needn’t say goodbye just yet. Her Times byline will live on in the approximately eighty obits of notable people she has already written in advance.

Margalit Fox never set out to be an obituary writer. “No one does,” she notes. Instead, as a kid, she trained as a cellist and as college approached, found a home at Barnard. “I had been one of those nerdy, bookish kids, and I had a feeling it would be a society of like-minded people, which it certainly was,” she says of the College. Attending for her first two years of undergraduate study helped Fox, 57, see the power and potential of female intellectuals. Then, she moved to SUNY Stony Brook. “I wanted to study linguistics and the Columbia/Barnard linguistics department, which was already very small, was sounding the death rattle,” she explains. “I knew if I wanted to major in linguistics I would have to transfer.”

After graduating from Stony Brook with her bachelor’s and master’s degrees in the subject, Fox worked in book and magazine publishing. She earned a master’s degree from Columbia’s School of Journalism in 1991 and pieced together a living as a freelancer until the summer of 1994, when she was called into The Times as a summer replacement for someone out on maternity leave. It was a copy desk job, which involves fixing grammatical, punctuation, and spelling errors, and checking facts as well. Though the job itself wasn’t particularly interesting to her, a bell went off in her head alerting her to take the position. By summer’s end, it became permanent.

She spent ten years as a copy editor at the Book Review. She loved books and her coworkers, but copy editing wasn’t quite enough intellectual stimulation. (“I feared my own epitaph would say little more than ‘She changed 50,000 commas into semicolons,’” her June essay says.)

With good reason. Her skills as a stylist and her ability to capture the meaning of an individual’s life and its impact on our culture are without peer. (The Times’s obits, by the way, are not tributes or eulogies; they’re news stories. And while they’ve tended to focus on white men, in the last year the newspaper has produced a selection of “Overlooked” obituaries for women of historical note whose deaths were not covered contemporaneously. Fox wrote one of those pieces, about Margaret Abbott, the first American woman to win an Olympic championship.)

Consider the lead sentence from her recent article about the late Nancy Barbato Sinatra, Ol’ Blue Eyes’s first wife: “The church in Jersey City where they married held a portent in its very name: Our Lady of Sorrows.” Or this one, from her obit of children’s book author and illustrator Maurice Sendak: “Roundly praised, intermittently censored and occasionally eaten, Mr. Sendak’s books were essential ingredients of childhood….” In a 2006 obituary of feminist pioneer Betty Friedan, Fox explained the conundrum faced by the 1950s suburban housewife:

The life she led, if educators, psychologists and the mass media were to be believed, was the fulfillment of every woman’s most ardent dream. Yet she was unaccountably tired, impatient with the children, craving something that neither marital sex nor extramarital affairs could satisfy.

In recent years, obituaries as a genre have gained new respect. The pressure, prestige, and profile of her department at The New York Times was engagingly showcased in Vanessa Gould’s 2016 documentary Obit. “Everybody knows that the presidents, kings, and queens are going to get obits,” Fox explains. But “what my colleagues and I love best are these unsung backstage players. These men and women are not household names, but…nevertheless put a wrinkle in the social fabric.” People like Dovey Johnson Roundtree, who died this spring at age 104. An African American army officer, lawyer, and one of the first women ordained as a minister in the African Methodist Episcopal Church, she was “instrumental in winning a spate of advances for blacks and women in midcentury America,” Fox wrote. On social media, she said, “Of all the news obituaries I’ve had the privilege of writing, few if any have moved me more than this one.”

The profession of obituary writer can be a taxing one, Fox says. “You have such intense communication with the people you’re writing about, you’re so wiped out cognitively by the end of it, that many’s the time I’ve come home from the newsroom and said to my husband, ‘I wrote about someone really fascinating today.’ He’ll say, ‘Who was it?’ I’ll say, ‘I can’t remember.’ ”

She explains: “To inhale the life of a stranger [and] exhale it onto the page in a matter of hours—sometimes one hour because people don’t always oblige us by dying way before deadline—takes everything you have mentally.”

To mitigate the stress, for the last two years at work, Fox mostly focused on advance obits, even as she pieced together Conan Doyle on nights, weekends, and vacations. It’s a true crime procedural detailing how the creator of Sherlock Holmes used his own detective skills to exonerate Oscar Slater, a German Jew falsely convicted and sentenced more than a century ago for a brutal murder in Glasgow, Scotland. Now she’s at work on two new books of nonfiction, more or less simultaneously. The first is a prisoner-of-war escape story. The second is a memoir of growing up as the daughter of blacklisted parents in midcentury, white-bread Long Island. “A John Reed family in a Donna Reed world,” she likes to say.

Fox misses her Times colleagues, especially those with whom she plays in a chamber music group. But she looks forward to sitting in her study at home, putting words on paper.

“I used to think there was no connection between obits and book writing,” says Fox. “But the idea of an obit is someone whose life is not only interesting per se but whose life can be a window on the culture and how it has changed. That angle and focus,” she says, will carry “over into my books as well.”

Lois Elfman ’80 is a journalist whose work often focuses on higher education.