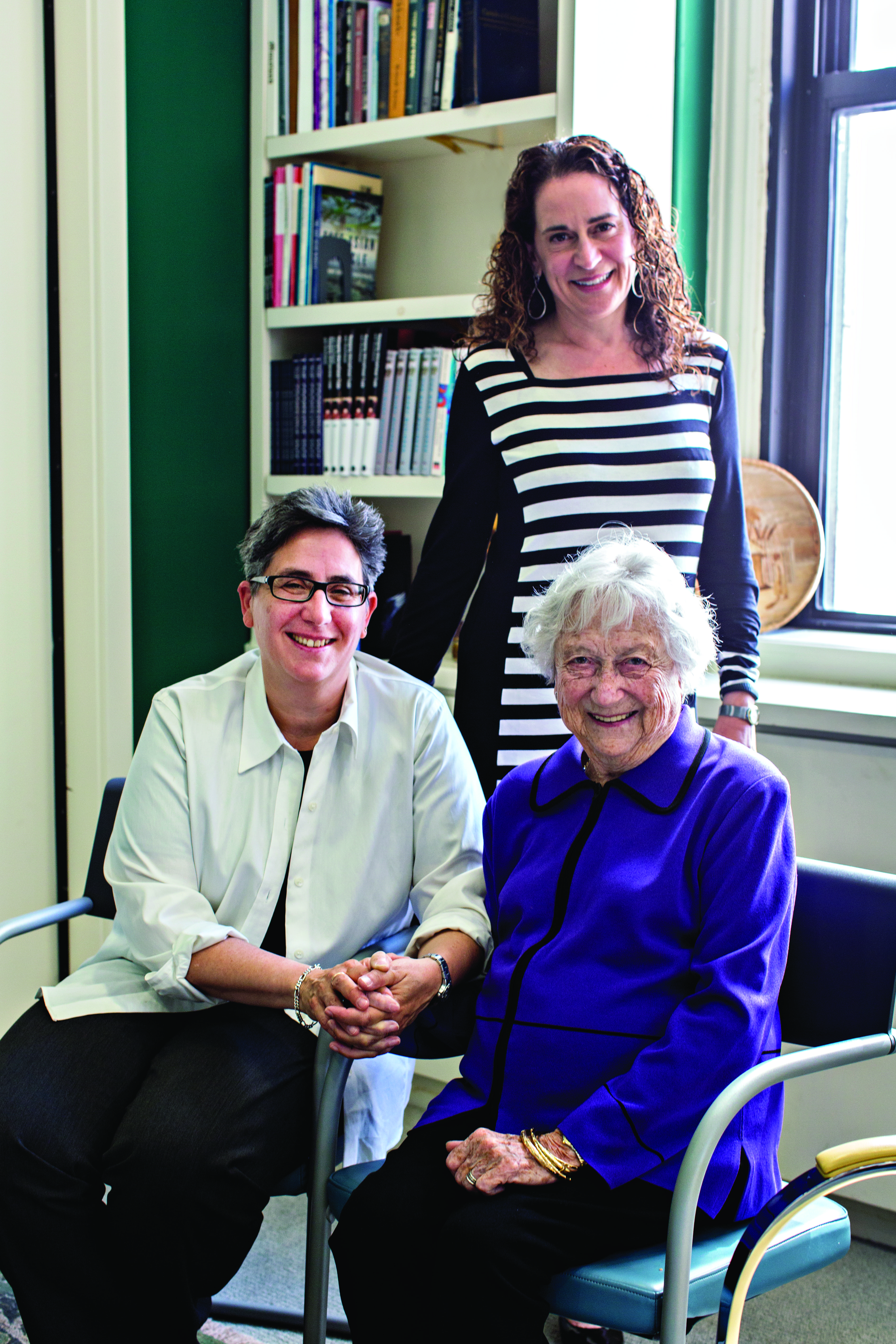 Each year, the large family of Miriam Scharfman Zadek ’50 gathers together for Thanksgiving. Zadek and her husband, Bob, both 85, have four daughters, plus 11 grandchildren who range in age from 13 to 35, making the holiday a significant annual event. This past year, Thanksgiving Day also happened to mark the first night of Hanukkah, making it an even more special occasion for the Zadek clan. But Miriam Zadek had no idea how truly wonderful this particular celebration would prove to be.

First there was dinner, then the opening of gifts, followed by the annual tradition of charitable giving. Zadek always asks each grandchild to give her the name of a charity (“preferably with websites,” she requests) so she can make donations in their names. Once the charities were specified, the eldest and youngest grandchildren, 35-year-old Sam and 13-year-old Lily, went to the front of the room and faced their grandparents. “We have something for you,” said Lily.

The surprise was a significant contribution to the College in honor of Zadek’s 85th birthday. The Zadeks’ daughters came up with the idea to endow a faculty chair in their mother’s name; each member of the family, including all 11 grandchildren, made a contribution to the creation of the Miriam Scharfman Zadek Family Professorship in the sociology department. Professor Debra Minkoff will be the first person to hold the chair.

“I cried,” recalls Miriam Zadek. “I had never dreamed anything like this would ever happen. The generosity of these children and grandchildren in thinking of this and acting upon it overwhelmed me. It was, in a way, so typical of their sensitivity, their awareness, and even their concern about others that has been evidenced by all of the charitable things they do.” 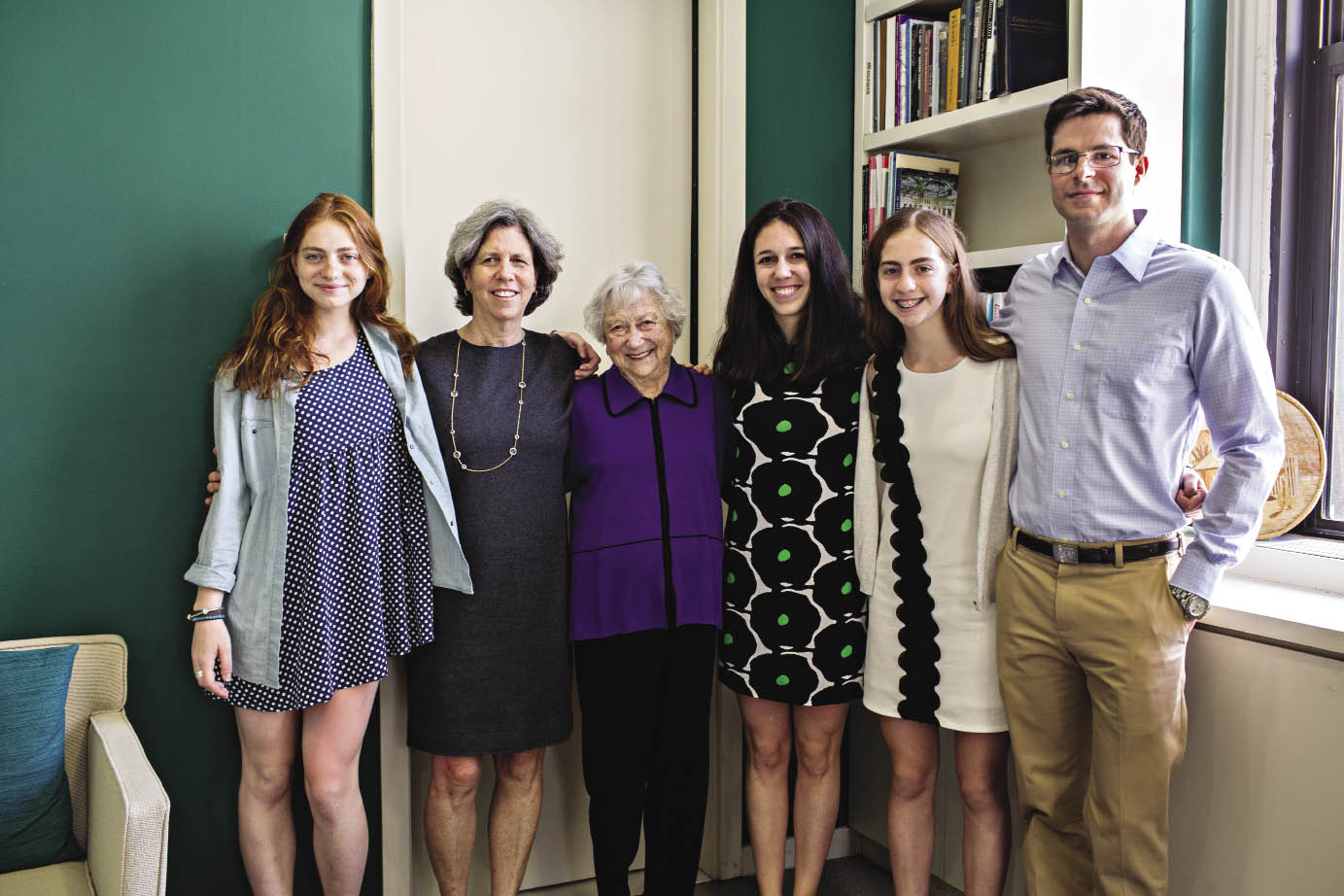 Those charitable leanings descend directly from Miriam and Bob, who raised their children to embrace philanthropy, specifically when it came to supporting education. “They have been instrumental in our lives; they instilled these strong educational values in us,” says daughter Sarah Umberger. “Barnard played a large role in [our mother’s] history. It was a place she felt was home.” Daughter Beth Zadek agrees that Barnard was a presence in their lives. In fact, her own daughter, Isabel Steckel ’17, followed her grandmother to the College. “Growing up, we always heard all about what Barnard meant to our mom,” Beth adds.

Anyone who knows Miriam Zadek might say the same, as her devotion to Barnard is difficult to ignore. Many in the College community cherish her for her seemingly tireless work as a volunteer and fund-raiser. For more than five decades, she has also worked to connect alumnae to the College as cohead, with pal Roselin Seider Wagner ’50, of the Barnard Club of Central Maryland. The two were given alumnae awards at their 2010 reunion for their dedicated service. Zadek has also worked to attract new students by volunteering as a recruiter and admissions representative. There is even a scholarship fund in her name. Whenever they receive a donation on behalf of the school, whether $5 or upward of $5,000, one of the pair will write a personal note to the giver. “I have to tell you, with a computer it’s easy,” Zadek admits. “Those who have e-mail, and a lot of them do, answer back.”

Zadek is also happy to share why the College was so significant to her development. She grew up in a small town outside New York City, the only hearing child in a family of three daughters. One of her sisters married a deaf man, and the two were raising a deaf child in the family home. Zadek had no real sense of herself outside the household. “I was known as the girl with two deaf sisters, but who was I?” Attending Barnard as a commuter student gave her some independence, but the longer she lived at home, the more immersed she became in the deaf community, a concern for her father, who wished for a more conventional existence for Miriam.

Zadek eventually shared his concern with the head of Barnard Health Services, Dr. Gulielma Fell Alsop, who immediately made an exception for Zadek and found room for her in the dorms. “It is a rare treat to be heard the first time one says something,” Zadek says. The move to campus changed her life. “I could act out my adolescence freely. I was a good student, and I could begin to find me.”

Another experience at Barnard that made a lasting impact occurred during her first year, in 1946. She and a friend decided they wanted to found a Zionist chapter on campus. They went directly to Dean Virginia Gildersleeve, to request a charter. Zadek recalls that Gildersleeve reminded them that there was a chapter at Columbia. “We said we thought it was important for Barnard to have its own.” What Zadek had not known was that Gildersleeve was opposed to everything a Zionist organization would stand for, which included the creation of a Jewish state. But as Zadek recalls that conversation, Gildersleeve told them they had a right to represent that point of view on the College’s campus. Says Zadek, “She gave us the charter, and I have never forgotten that lesson. Never.”

Zadek’s family encouraged her to select the department in which to endow the chair. With an interest in sociology, religious studies, and political science, she thoroughly researched the course catalog online. She decided on sociology, her major at the College. Although she went on to do social work after receiving a master’s degree in the field from Columbia in 1952, sociology was always a part of her daily life. “For years I have been involved with people who communicate in a different way. Understanding group dynamics has informed the way I have worked throughout my life and career,” she says.

Among other achievements, Zadek worked for 20 years as the director of social work at the Hearing and Speech Agency of Baltimore (she remains on the board), and founded the agency’s centralized interpreter referral service. She is currently writing a manuscript about her life growing up with two deaf sisters and what it means to be in a family that now includes five generations of members affected by profound deafness.

The endowment was made official at a small gathering in President Debora Spar’s office in mid-April, which included Minkoff, Zadek, and members of her family. “From our perspective, it was such a lovely thought on the part of the family,” says Beth Mauro, executive director of individual giving. “What a meaningful way to honor their mom and grandmother and help Barnard. The fact that Miriam is so happy about it is what’s really great.” To be sure, Zadek could not be happier. “Barnard gave me a gift that helped shape my life,” she says. This gift is a tribute to how much of her life was spent returning the favor.