At the 2014 Global Symposium in Shanghai, the question is asked: Have we stalled?

A key question raised at Barnard’s sixth annual Global Symposium, Women Changing China, was what has changed for women in China since Barnard organized the first such symposium, in Beijing in 2008. From the beginning, each symposium has addressed women’s issues, such as feminism, career opportunities, and cultural change, with outstanding women leaders in business, finance, academia, media, and the arts from the host country serving as panelists. Organized in such diverse cities as Mumbai and Johannesburg, the symposiums have recently added a leadership workshop for high school students directed by Barnard Student Fellows, who apply for the opportunity before the event. This year’s was held at the High School Affiliated to Fudan University.

“Where does China stand? Have we seen progress with women’s rights?” asked President Debora Spar as she opened the symposium in the ballroom of the Portman Ritz Carlton Hotel, which overflowed with more than 300 attendees, many of them young Chinese women. “Have we stalled?”

Spar moderated the first session, which featured Wu Qing and Yang Lan, among China’s most influential and inspiring role models, particularly for younger generations of females. They were also participants in the first Beijing symposium. A former professor at Beijing Foreign Studies University, Wu is the cofounder of the Beijing Cultural Development Center for Rural Women, an organization focused on education. A former legislator in the Chinese government, she is an outspoken advocate for women’s and human rights, winning international acclaim for her work. Yang is a talk-show host (widely considered to be China’s Oprah), journalist, and cofounder and chairperson of one of the country’s leading private media companies, the Sun Media Group, as well as of the nonprofit Sun Culture Foundation.

Both Wu and Yang said that women’s rights in China are improving, but that there is still a long way to go.

Under Mao Zedong, orchestrator of the Communist revolution in 1949 and the first leader of the People’s Republic of China, men and women were considered equal. Mao once famously said, “Women hold up half the sky.” Yet in more recent history, gender experts say women have been losing—rather than gaining—ground in China. A concerted women’s rights movement is hard to incubate, given that the Chinese government lumps women’s rights under the umbrella of human rights, which remains a sensitive topic in the country. Unsanctioned NGOs are banned, making it difficult for women’s rights groups to flourish. Women earn less than men do. In addition, in 2011, the Beijing government reinterpreted a property law, implementing a rule that homes would revert to the buyer upon divorce, which could leave countless women homeless.

However, Wu said that more women are aware of their legal rights, particularly at the grassroots level in rural areas, and that more are “fighting back” by staging small-scale protests or directly questioning government officials when they feel their rights have been violated. In 2012, women in Beijing staged a protest demanding more public toilets for females. As part of the protest, they occupied men’s public bathrooms. While seemingly benign, the operation, dubbed Occupy Men’s Toilets, was seen as an example of women’s newfound willingness to take a stand. More women are getting involved in politics, particularly at the village level. Wu said five women from her education center have become officials in their home villages. “It means they can at least make some of the decisions at the grassroots level, which will benefit women’s rights, and that they are good role models,” Wu added. “But if you look at China’s top leadership, all are men. I think we have a long way to go. Change comes very slowly.”

Wu stated that young women, particularly at the college level, have a heightened awareness of their rights. In Beijing and elsewhere in the country, female university students are staging The Vagina Monologues, which only a couple of years ago was banned in China. “It has caused a lot of support as well as protests,” she said. “But I think the students are great because they know that girls are human beings before they are girls. We are all human beings first.”

Both Yang and Wu focused on the moral responsibilities women have in China where breakneck economic growth, fierce competition for material security, a declining stronghold of Communist ideology, and a dearth of religion or other belief systems have created a social structure that has little regard for common humanity. Yang said that Chinese women have to worry constantly about the safety of the food they feed their children. Women also face barriers in their professions; companies often prefer to hire men because of a pervasive mind-set that women will be too much of a burden to a company if they have children. While women widely outperform men in many majors at universities, their male classmates tend to be offered more jobs.

“I do think we are changing for the better and for the worse at the same time,” Yang said, noting that it is a pervasive phenomenon for young women in China to care about marrying a “wealthy middle-aged man” at the expense of their careers. She pointed out how there was a widespread outcry after a contestant on a reality dating show said she would “rather cry in the back of a BMW than on the back of a bicycle.” Yang added that the general feeling was “What is happening to…girls? What is their value system?”

Both panelists agreed that it is hard to generalize about the situation for women across China. In urban areas, more women seek higher education and go overseas to study and work. Yet in rural areas, women who work often have to travel—sometimes thousands of miles—to other cities, leaving their children with grandparents and likely seeing them only once or twice a year over holidays. “For working women in rural areas, there is a huge stress on their life balance,” Yang said. “We have at least 50 million children in rural areas left behind with their grandparents. Imagine the emotional toll taken on these women. It is just beyond imagination.”

“No rights are given or granted,” Wu said. “You have to fight every step of the way forward, and you have to be prepared, especially in China. It is not easy.”

Afternoon sessions for the all-day event focused on successful female entrepreneurs and how they have navigated the business landscape in China in sectors including finance, education, media, and the arts.

Read more about the Shanghai Global Symposium and see more photographs and videos of the events at barnard.edu. 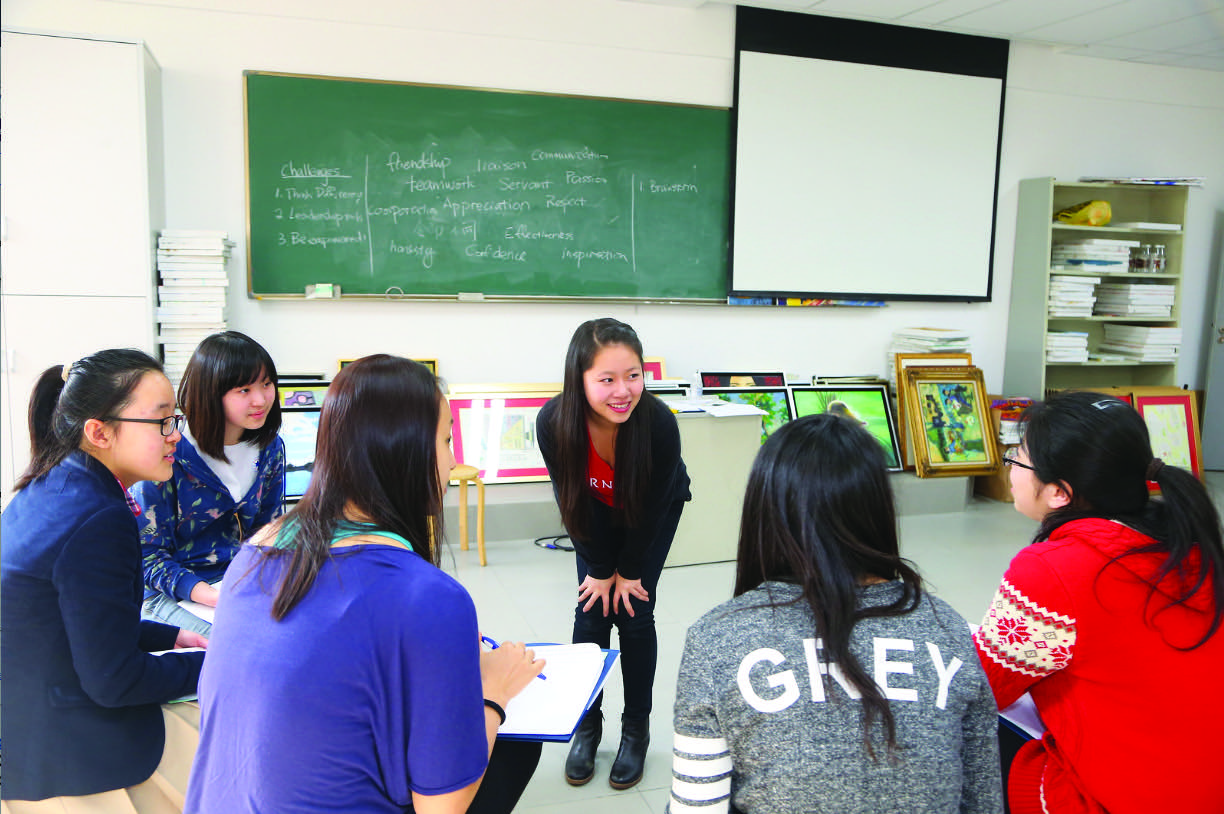 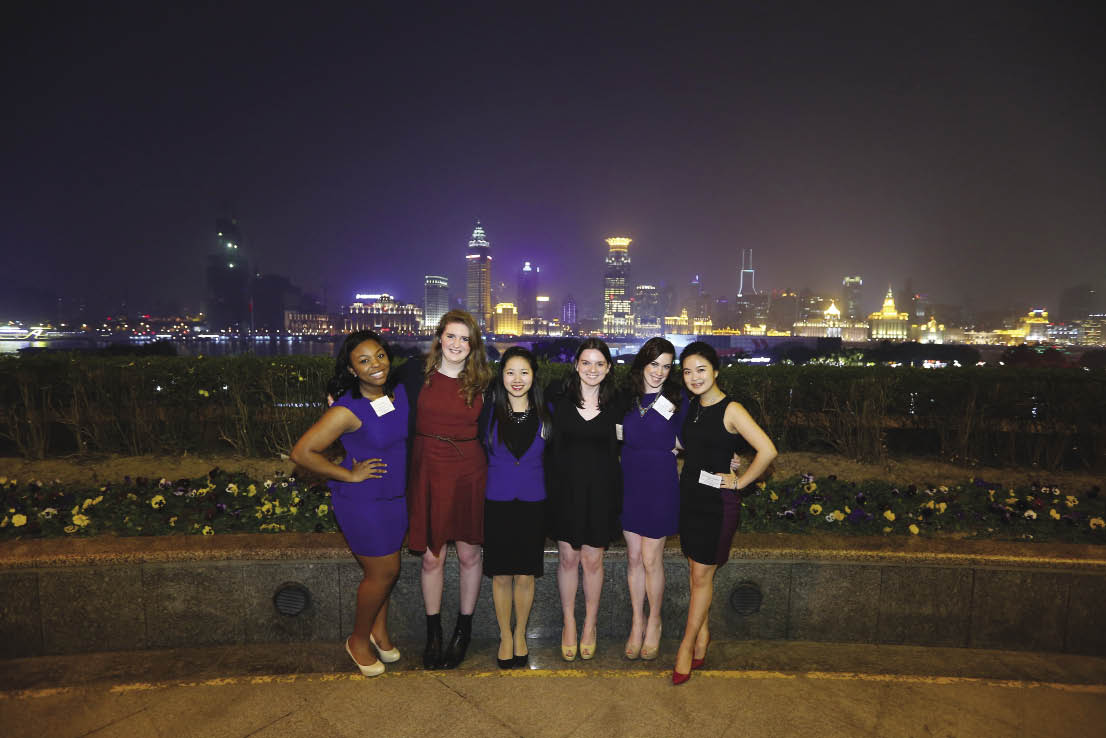