Beyond Any Shadows of Doubt

To the untrained eye, numbers and economic theories might not seem like the ideal instruments for answering questions about why humans act the ways they do. But for Barnard professor Rajiv Sethi, these are exactly the tools he needs to both explain and predict behavior. Using them, along with a deep-seated passion born in childhood, he has built a career answering questions about everything from Brexit to police shootings. Ambitious? Absolutely. But also work essential to Sethi, the chair of the Economics Department.

This desire to suss out what motivates humans first arose when Sethi was just 11 years old. At that age, he relocated with his family from India to the United Kingdom. Growing up as an immigrant of color in the U.K. had a profound, lifelong impact on him.

“I was suddenly a minority and sometimes not treated well,” he says. “From that time, I have thought about stereotypes and identity — how people make inferences from physical cues and the beliefs they form from these cues.”

That interest stayed with him when he moved to New York City to attend The New School, where he received his doctorate in 1993. Today, memories of past discrimination inform his work in microeconomics and game theory, with applications to inequality, crime, communication, and finance.

He also researches and develops economic forecasting processes, assessing the likelihood of certain geopolitical events based on predictions about the economy. But his most celebrated accomplishment to date is his participation in the creation of the Curriculum Open-Access Resources in Economics (CORE), a collection of high-quality resources written by 23 economists from across the world. Completed in 2017, it is distributed free online and has earned praise from academics, students, and publications such as The New Yorker, which called it “engrossing.”

Barnard’s economics department recently received a $1 million grant to support CORE Academy, an initiative dedicated to the reform of economics education and the enrichment of economics discourse. (For more about CORE, see our story on the previous page.)
For CORE’s creators, Sethi says, the idea of charging the industry textbook standard, which can be higher than $400, is outrageous. “We wanted the broadest possible access to it, so people who wanted to learn economics didn’t necessarily have to be involved in an academic program,” he says.

Anchoring this humanitarian notion was sound numerical reasoning. “Economic principle justifies this,” Sethi explains. “The cost of producing a book is primarily a fixed cost. Once you pay the cost, making additional copies is essentially free. So the cost of producing another copy of CORE is nothing if it is up on the website.”

CORE has been incorporated into the course materials of schools that include University College London and Sciences Po, in Paris. In addition to the digital option, print versions are for sale, but for less than the price of most economics textbooks. “It has a cost of production,” Sethi adds.

As an academic focused on issues of equality, Barnard’s mission of female empowerment is important to him. Prior to coming to Barnard in 1995, Sethi — who is also an external professor at the Santa Fe Institute in New Mexico — had little experience with all-women’s education. “Like many Barnard faculty, I have taught courses at both Barnard and Columbia, including graduate courses. But my favorite courses are always those in which a majority of students are from Barnard,” he says. “The admissions office does an incredible job of assembling amazing cohorts of really serious and thoughtful students year after year, and the best part of my job involves interacting with these students while they are here and taking pride in their accomplishments after they leave.”

He hopes students will collaborate with him on one of his newest projects: adapting CORE for American students. “Depending on funding, we will hire a lot of students to work in various capacities,” says Sethi, adding that students already provide a steady stream of feedback on the material, which he’s overseeing along with colleagues Homa Zarghamee, assistant professor of economics at Barnard, and Suresh Naidu, associate professor of economics and international affairs at Columbia. 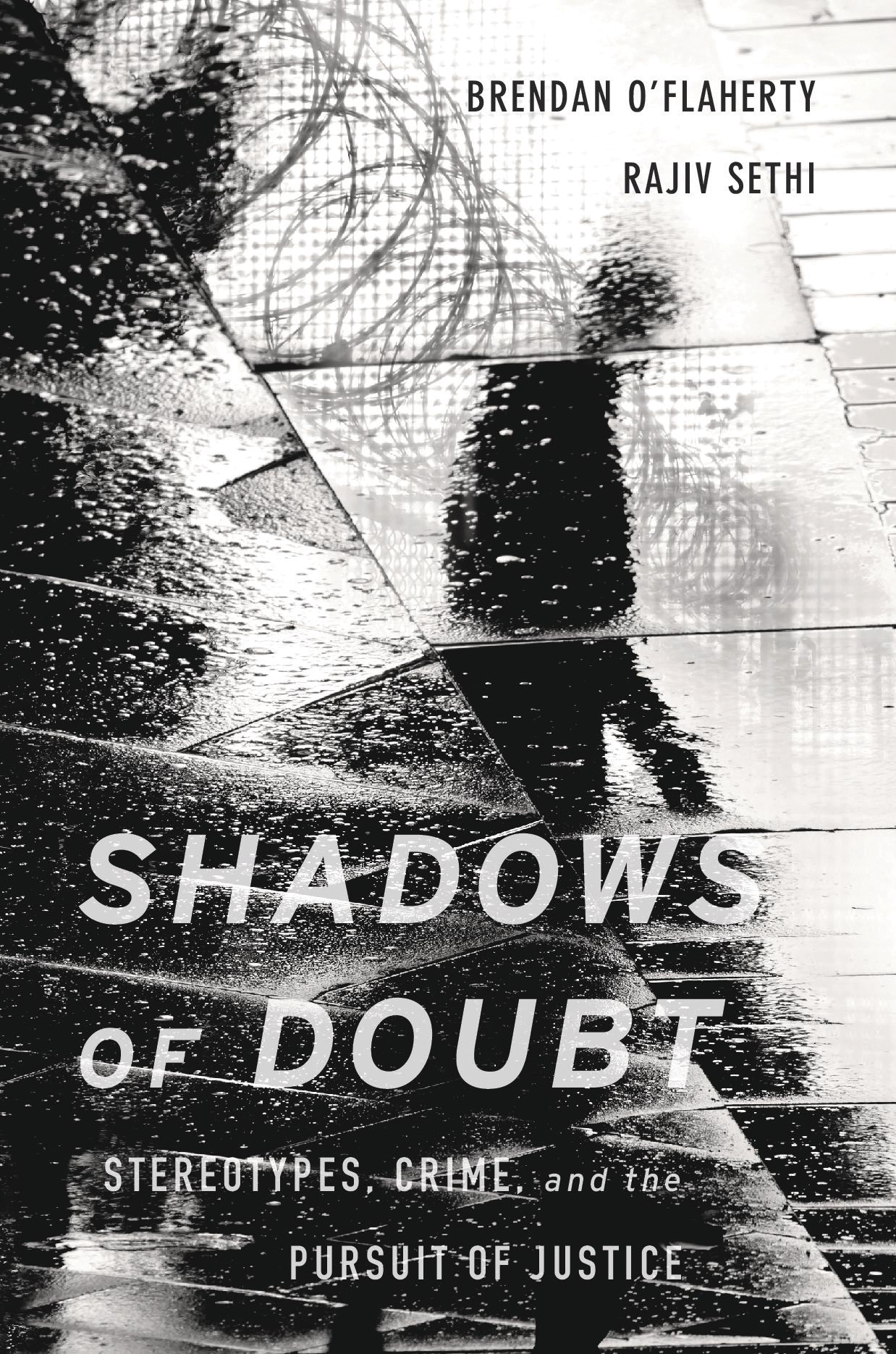 The “Americanization” of CORE is just one of four projects Sethi has been working on this year. In April, his first book, Shadows of Doubt: Stereotypes, Crime, and the Pursuit of Justice, was published. The result of work with his frequent collaborator Brendan O’Flaherty, an economics professor at Columbia, it explores how stereotypes can shape the ways incidents unfold. Chapters draw on real-life examples such as the 2016 Delta flight in which a black female physician was blocked from assisting a sick passenger because her race and gender made a flight attendant skeptical that she was a doctor. Sethi and O’Flaherty explore this and other situations using cognitive psychology, data, and strategic decision theory in order to see how justice can be better served.

Research on the book brought one surprising insight to Sethi, and it is the basis for the third of his current projects. As he and O’Flaherty investigated the incidence of police officers’ use of deadly force across the U.S., they learned that the rates are “quite staggering” in western states, like New Mexico, compared with those in the Northeast. Unsure what would cause such differences, Sethi and O’Flaherty are focusing instead on the implications of the discrepancy.

“I’m [now] working with a statistician, José Luis Montiel Olea at Columbia, and my co-author,” says Sethi about the Geography of Lethal Force project. “The three of us are following up as to what these differences could be about.”

They’ll examine geographic variances that reflect practices and culture of local law enforcement training, organizational culture, and availability of firearms. “The primary mode of analysis will be statistical,” Sethi continues, but he and his colleagues have also formed an interdisciplinary working group, including experts in law, criminology, sociology, economics, and statistics, to determine the sources of these discrepancies.

Another project, SAGE (Synergistic Anticipation of Geopolitical Events), also moves beyond pure economics, in that it’s related to computer science.

“One thing I’ve been interested in is how financial markets work, and especially how they can be used to make predictions about various outcomes, like [results] of elections. Or like if the Brexit decision will be implemented,” says Sethi. Working with a research team led by the Information Sciences Institute at the University of Southern California’s Viterbi School of Engineering, the SAGE research team has a four-year grant to combine human judgment with machine-based models in order to accurately predict worldwide socioeconomic issues such as disease outbreak, elections, and conflicts between nations.

As Sethi’s work continues to deconstruct stereotypes, the biggest one may be that economics is an emotionless discipline. In his research and his understanding of incentives, costs of production, and game theory, Sethi is motivated by the most human of emotions: the desire to make the world a better place. •