After entering Barnard as a premed student, Evangeline (“Vangie”) Delgado ’15 landed a much-needed job as an office assistant for Well-Woman, the College’s health promotion program. She remembers how little she knew about health advocacy for women when she first arrived on campus.

“I had never set up my own appointments,” she says. “I didn’t know what happened at the OB-GYN office. And I had not learned about alcohol, drugs, sex, or sexual violence.” During her first month, Delgado joined a conversation some of the program’s peer educators were having about a “slut walk,” an organized march against rape culture and victim blaming, that had taken place in lower Manhattan. Another afternoon was filled with talk about the shame some students unnecessarily felt about their periods. Excited that no issue seemed off-limits, Delgado applied the following year to become a peer educator herself and held the role through graduation. “I applied because I wasn’t done learning,” she explains.

Through the program, Delgado learned how to ask questions and feel empowered about her body. “That is the thing I take away the most,” she says. She recalls the honor of representing Barnard at the Avon Foundation’s annual Tribute Reception in 2014 and accepting the Ambassador Award on behalf of Well-Woman and Columbia’s Sexual Violence Response, which provides confidential support, advocacy, prevention, and outreach programs, for helping to create safe spaces for students. During her second year, Delgado realized that premed was no longer the right track for her, but she learned she could fulfill her passion for health education in other ways.

Now, she leads a program modeled after Barnard’s Well-Woman at the Emma Willard School in Troy, N.Y., a prep and boarding school for young women in grades 9-12 that was the first institution of higher education for women in the United States. At Emma Willard, her primary objective is to enable students to become knowledgeable enough about their own health to make thoughtful choices — and to model positive behavior for the benefit of their peers. She expanded Emma Willard’s health program and opened a Well-Woman-like office called the READY Center, where students can acquire information. Juniors and seniors apply for acceptance into the program and are charged with educating and promoting health and wellness among students and faculty. One thing that is especially important to Delgado is that rather than trying to be beacons of wellness perfection, the Wellies explore and learn together.

Delgado was inspired by her mentor, Jessica Cannon ’03, Well-Woman’s current program director of health promotion and education, who had hired her to be an office assistant. “I knew I needed to be around Well-Woman, Jessica, and the other peer-eds to continue my own education, and I wanted to be a part of helping other folks,” Delgado explains. “Jessica has been absolutely invaluable the last couple of years, helping me collect data, giving input on the proposal I had to present to Emma Willard, and with designing the office and the program. Well-Woman has very much been the big sister to the Emma Willard program, and having the Barnard program mentor ours is cool.”

From Mentee to Mentor

Last winter, Delgado returned to Barnard to visit Well-Woman and Cannon with 17 Emma Willard students — wellness advocates known as “Wellies”— to discover where their program began. Emma Willard alumnae currently at Barnard and Columbia shared advice with the Wellies about the transition from high school to college, what they felt prepared for, and what challenges they faced. The group also received an official campus tour (the first-ever college tour for some of the Wellies), offering a window into what their futures in college might look like.

For Cannon, being able to witness the passing of the baton from Delgado to her mentees is deeply fulfilling. Cannon couldn’t stop gushing at the instant connection that formed between the two groups of students: “Seeing our wellness education mission and values extend to another campus, and to younger students under the guidance of an alum, makes me more proud than I can say.”

The Wellies are only a year old, but they’ve already had workshops on body image, sexual violence training, self-defense, time management, mindfulness, finding purpose, cultivating gratitude, and nutrition. The students have even produced some of their own programs, such as Mindful Monday, during which they hold weekly meditation sessions. Last summer, the group went on a retreat to the Berkshire Mountains, where they practiced yoga; performed dance sessions themed around body positivity; participated in a seminar on how to manage, rather than avoid, stress; and engaged in silent nature walks.

Some students question the need for the program, to which Delgado answers, “This work is not always about the glitz and glam and putting on big fancy events; it’s about the one-on-one conversations you have with someone on your hall that’s going to change their life or yours.”

“Our students are so bright,” says Cannon, who began as a Well-Woman peer educator at Barnard and was later hired as a health educator in 2004, “but so few of us come to college already educated on wellness, our bodies, and how to best take care of ourselves. The idea that Barnard prioritized that kind of education and wellness by having an office where you could just walk in and ask any kind of question blew my mind and made me more confident that I had made the right choice in coming here. It’s so Barnard that Well-Woman started because of the passion and commitment of our students.”

What is now known as Well-Woman began in 1986 when Barnard students advocated to start a peer education group called SCOPE (Sexuality, Self-Care, Contraception Options Peer Educators). Three more groups followed — on self-esteem, HIV counseling, and sexual violence. In 1993, Giselle Harrington, associate director of health services, brought these peer education groups together under the Well-Woman umbrella. From the start, the program’s mission has been to promote the health and wellness of students through peer education, educational programming, open office hours, individual health-behavior consultations, campuswide health campaigns, community outreach, and advocacy. Over the years, the office has hosted events that explore gynecological health, nutrition, sex, and sleep habits, as well as less weighty subjects such as stress relief through yoga and knitting.

Peer educator Aneliza Ruiz ’20 remembers first hearing about Well-Woman during New Student Orientation and then spontaneously showing up at the office for an evening session two weeks later. “As a first-year, and as someone who was starting to gain a stronger understanding of my feminism, I felt that Well-Woman would be a positive environment for me to learn, grow, and serve,” Ruiz explains.

Now, Well-Woman’s weekly “Healthy Monday” email includes tips for resting, eating, moving, and connecting well. Every Wednesday night, peer educators host a different crafting event. At Barnard’s Primary Care office, students having IUDs (intrauterine devices) inserted for contraception can request to have a trained peer educator, cheekily called an IUDoula, sit with them during the procedure. And the Well-Woman office recently launched a new discussion series, called “Well Said,” that addresses topics such as how best to apologize, how to handle false expectations, and how to overcome academic stress. 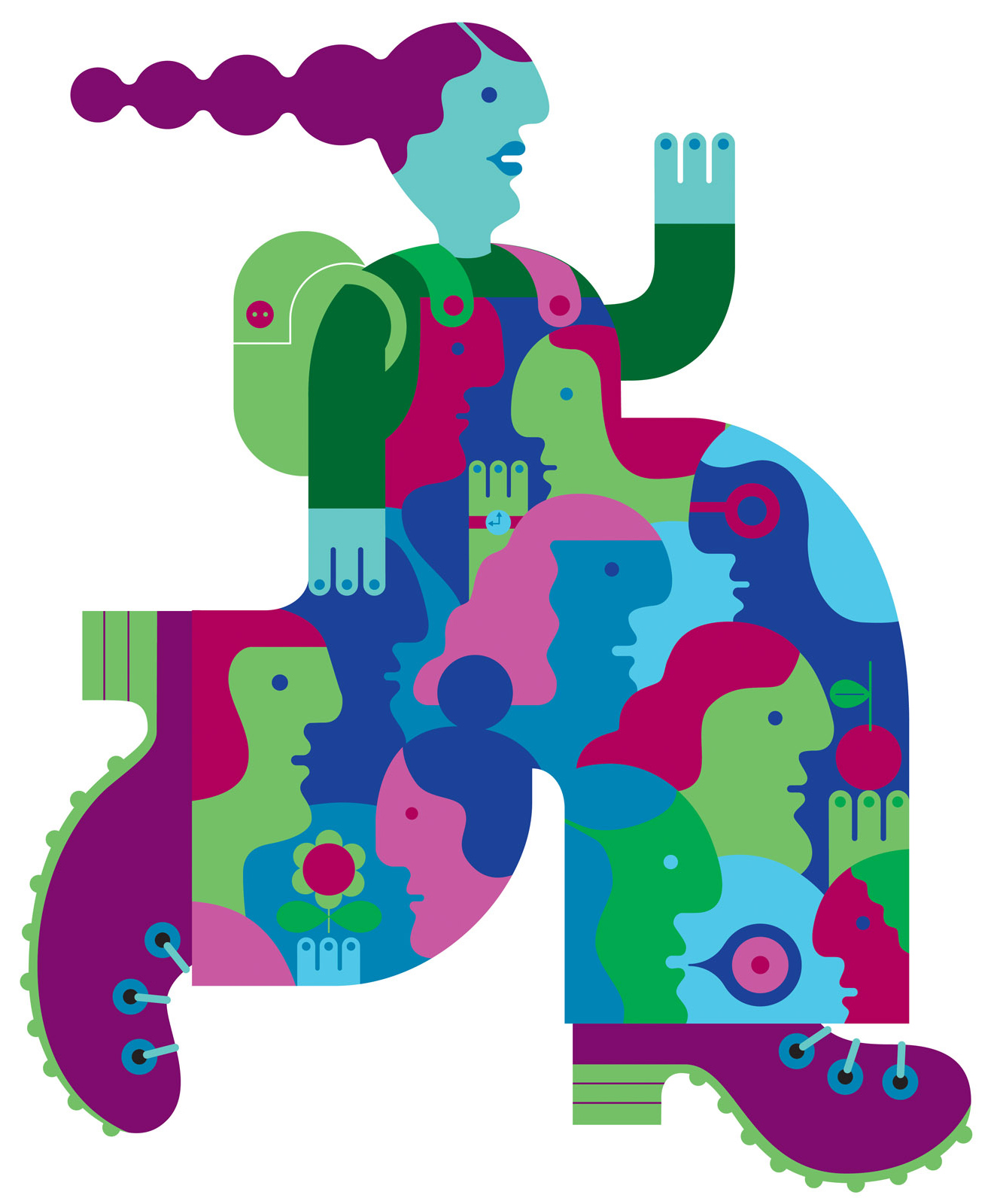 Recently, Ruiz introduced Cannon’s favorite new event at Well-Woman: a Do-Over Prom to compensate for unsatisfying high school prom experiences. “I think it is unique on college campuses to have an office dedicated to the health and wellness of women, trans folks, and other gender minorities who have historically been marginalized in medical and health communities,” Cannon says.

While the Wellies find their footing a year after beginning their journey, Well-Woman continues to grow, thanks to the efforts of student and alumnae over the past 33 years.  Whether or not the programs’ paths remain parallel, Delgado knows that Cannon is only an email away, and that the Wellies and Well-Woman are forever connected through Barnard. •