By by Susan Johnston

In her first high-profile case, Nancy Gertner defended Susan Saxe, an antiwar activist accused of robbery and murder in a Brighton, Mass., bank heist. Then in her late 20s, her experience had consisted mainly of representing women in divorce court and handling a few criminal trials. Though she had not planned to defend the lesbian radical feminist, the case would prove a watershed moment for her career as all eyes focused on Gertner and her client—and most expected them to fail. “I have no idea why I took the case except that I could not acknowledge my own fear,” she recalls. “If we failed, we were narcissistically carrying the entire mantle of our generation.”

Once she accepted the challenge, Gertner developed a friendship with Saxe and immersed herself in mounting Saxe’s defense. “Her background was similar to mine,” she says. “Visiting her in jail was an experience that I never forgot—even as a judge—what it’s like to hear the doors slam when you go to prison. Those are the kinds of experiences that I think we all should have on the bench.”

The first trial ended in a hung jury, which few lawyers, reporters, or others expected. Articles on the trial referred to Gertner as the “lady lawyer”—if they referred to her at all—highlighting how little the public thought of Gertner or female criminal-defense attorneys at the time. Saxe later pleaded guilty to manslaughter, but the highly charged case helped make a name for Gertner and her Boston law practice. As a lawyer, and later a federal judge, she would continue to spark controversy and advocate for important social issues—and would win the respect of her opponents.

Known for wearing red dresses in court and, early in her career, carrying her legal briefs in shopping bags, Gertner kept a file on the gender insults and sexual discrimination she encountered from judges and other lawyers. Despite, or perhaps because of, her struggles to be taken seriously in the male-dominated world of law, she went on to handle cases involving sexual harassment, abortion, murder, sex discrimination (including a lawsuit against Harvard Law School for discrimination in a tenure issue). At the start of her career, she also represented a woman whose psychiatrist was accused of having sex with her.

Now, three decades after the Susan Saxe case, Gertner shows few signs of retreating from the public eye. Beacon Press published her memoir, In Defense of Women: Memoirs of an Unrepentant Advocate, in 2011; she now juggles speaking engagements, full-time teaching at Harvard Law School, and work on a second book about her time on the bench. She says she’s also been approached about running for political office and hasn’t ruled out that possibility. Indeed, hanging up her judge’s robes means that Gertner can air her opinions much more freely. “As my husband says, now that I can speak, I can’t shut up,” says the law professor. “I have a lot that I’ve held in over the last several years.” She spoke candidly about her career and the challenges facing professional women during an alumnae event and book-signing hosted by the Barnard Club of Boston in October.

Gertner grew up on the Lower East Side of Manhattan, the youngest daughter of a Jewish family with roots in Poland and Hungary. Her older sister, Roz, attended Barnard and Gertner followed, studying political science and serving as president of the undergraduate association during her senior year.

She arrived at the College as one person and came out another. As Anna Quindlen, who is quoted in Gertner’s book says, “I arrived at college with…a trunk full of perfect pleated kilts, and perfect monogrammed sweaters, by Christmas vacation I had another perfect uniform: overalls, turtlenecks…and the perfect New York City Barnard affect—part hyperintellectual, part ennui…” After reading The Feminine Mystique and discovering her social conscience, Gertner left college an antiwar protestor and an outspoken feminist, though admittedly the kind of feminist who shaved her legs. “We were the transition generation,” she says, noting that she remains in touch with a group of friends she met at the College. “The school I started off at was not the school I graduated from and not remotely the school it is today. It was the place I first marched against the Vietnam War.”

While at Barnard, Gertner took a constitutional-law class, an experience that, when paired with spirited debates with her father growing up, sparked her interest in studying law. “I still have my notebook from that class,” she says. “It was seared into my memory.”

At Yale Law School, where Gertner was one of 20 women in her class, she struck up a friendship with classmate Hillary Rodham and met Bill Clinton, who would later nominate her for the federal judgeship. After Yale, Gertner worked as a law clerk, and then practiced at a firm in Boston. Her long-term plan was to become a professor rather than practice law. “But after the experience of literally saving someone’s life in the Saxe case, I couldn’t leave,” she says. “I just did what I thought  was right.” 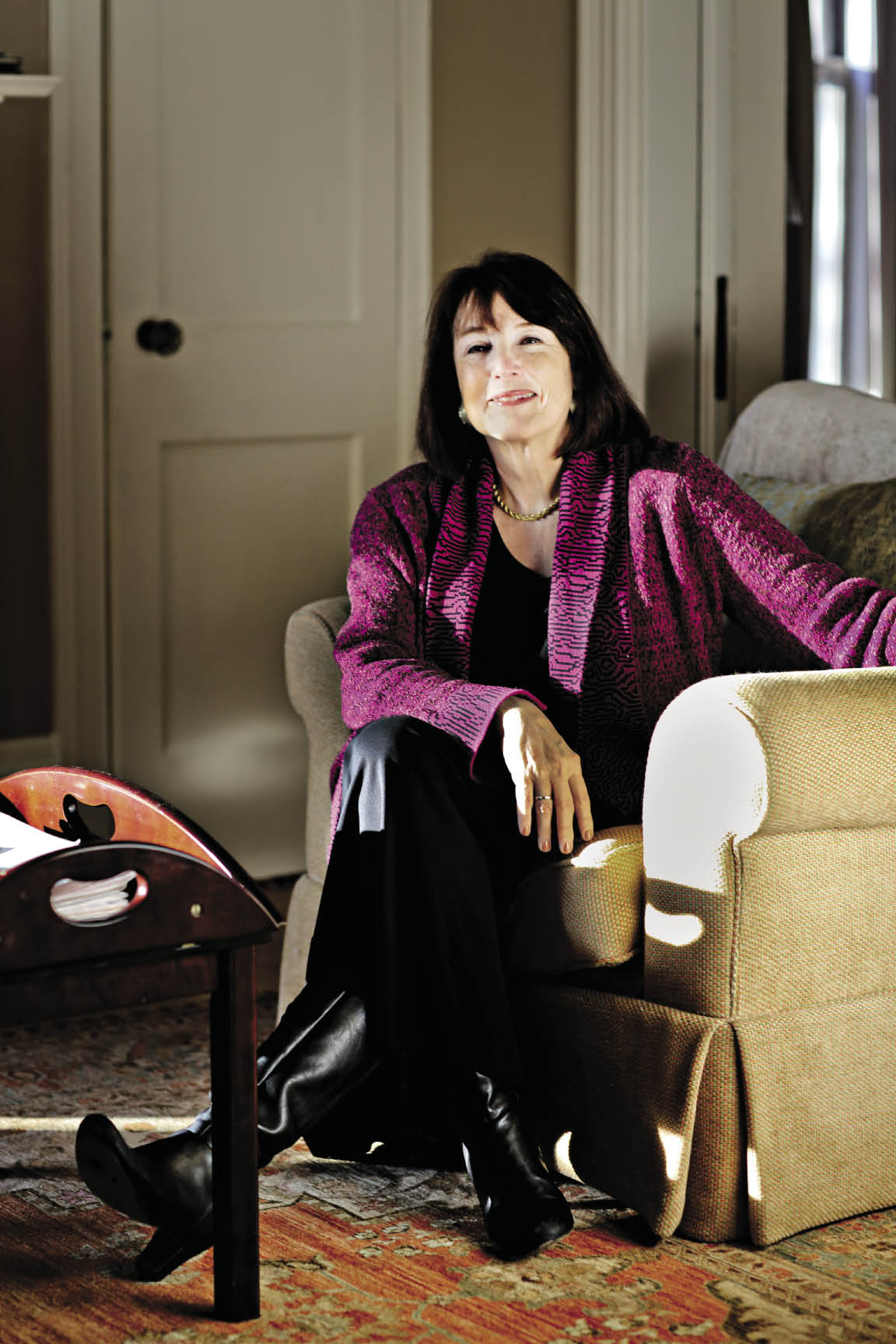 Throughout Gertner’s career, she’s advocated for what she believed, even when the path to justice was winding and unclear. In one case, she defended a local college student who’d been found guilty of rape because Gertner thought the original charges were not believable. On appeal the conviction was overturned, and her client went free. Still, Gertner worried about the precedent set for future rape cases since the appeal initially resulted in a decision that was not helpful to women victims, and went beyond what she’d originally asked for. As she wrote in her memoir, “Once you are enlisted to represent someone, you cannot control the outcome, the court’s reasoning, [or] the impact on other cases.”

For much of her twenties and thirties, Gertner says she was “determined not to marry and have children, part of my rebellion in direct proportion to my mother wanting it.” She met her future husband, ACLU attorney John Reinstein, when they worked together on abortion cases. When the couple married, Gertner became stepmother to Reinstein’s daughter, Sarah. Gertner had her first of two sons, Stephen, at age 39, and jokes that her experiences of motherhood and menopause ran “neck and neck.”

When asked about balancing motherhood and a high-profile legal career, Gertner explains that starting a family later in life allowed her the stature and resources to create a flexible schedule when she needed it. But, she notes, her experience can’t be generalized. “Between the two of us, we could create an environment where [balancing children and a career] is possible, but I don’t want anyone ever to believe that that’s the only right thing to do,” she says. “It was right for us.”

Over the course of her career, Gertner has received numerous awards. Most recently, the Women’s Bar Association of Massachusetts awarded her the Lelia J. Robinson Award, which recognizes women who “have captured the spirit of pioneering in the legal profession.” She says choosing a favorite award—like choosing a favorite legal case—would be like choosing which child she loves most. However, she admits that being the second woman (after Justice Ruth Bader Ginsburg) to receive the Thurgood Marshall Award from the American Bar Association in 2008 “has a special resonance because of who the namesake is.” Gertner says she admires Marshall’s clarity of vision in dissent after dissent. “[In a speech] Justice Sandra Day O’Connor said that he brought to the court a set of experiences, perspectives, and context that was unique to that Court: The experience of having been reviled, discriminated against, and representing the powerless and dispossessed,” Gertner explains.

As a professor of law, all too often she meets students at Harvard who are “hell-bent to pay back loans and seeking conservative career choices.” Gertner wrote In Defense of Women because “I wanted to talk about what it was like to make choices based on what you love, to write about making a career in the public interest. Life would have been easier for me if I hadn’t made those choices.”

The gender discrimination that she encountered as a young lawyer in the seventies followed her even as the Senate Judiciary Committee reviewed her nomination for the federal judgeship. She recalls mobilizing every prosecutor she had ever opposed to send letters of support. Still, Gertner says her appointment was held up for 10 months. Massachusetts Senator Edward Kennedy, who had recommended her for the federal judgeship in the first place, worked tirelessly on her behalf. The Senate eventually confirmed her in 1994, and she served on the bench until 2011. Along the way, Kennedy served as an inspiration. “He was willing to use his legislative skills towards social change,” she says. “It didn’t matter whether there would be consequences.”

Even after her appointment, Gertner was criticized for her outspoken tendencies. Judges are often expected to be impartial, but impartiality is a struggle, and the question is how to achieve it since it’s not something that’s innate. “None of us is born neutral and without opinions,” she argues. “We select judges in their forties and fifties, and life [gives] you opinions. The enterprise is to know where those opinions end and the job begins.”

Those dynamics explain why Gertner is working on a second book, this one about the role of judges in contemporary society. “I’m writing about being a judge, not in the way that the academic books have treated it, but talking about the real pressures on judges,” she explains. In her time on the bench, Gertner observed what she describes as pressure to avoid controversy and dismiss cases on technical grounds. “These forces really undermine access to justice, and it cuts across right and left,” she says.

Read more about how the Barnard community is staying connected during these challenging times, from the College’s virtual “Reunion Reimagined” to in-depth conversations with alums Lida Orzeck ’68 and Maryam Banikarim ’89, P’21.  To access Class Notes, click here.