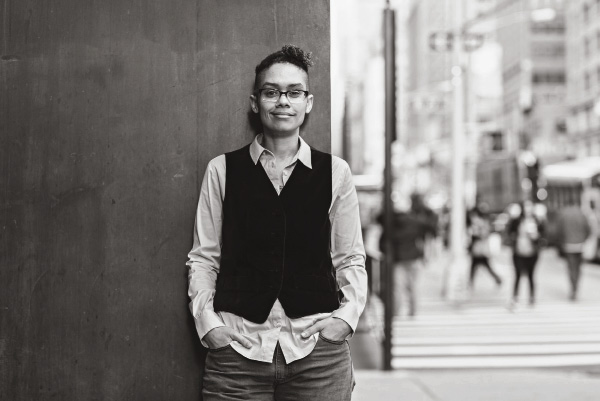 Growing up in Kansas City, Mo., Carrie Hawks ’01 attended an elementary school with mostly African American students and then transferred to a private school where most of the students were white. In both worlds, Hawks struggled with questions about what it means to be authentically black. Black children asked, “Why you so light?” and “You think you’re better than us?” At a sleepover as an adolescent, a white friend asked, “Do you carry a gun in your purse?”

“My blackness,” says Hawks, “was subject to others’ approval.”

Hawks’ new film, black enuf*, is an animated documentary that mines the filmmaker’s personal journey to ask questions about race, including how identifying as queer can complicate the quest to fit into the black community. Stories from a great-grandmother’s autobiography, interviews with family and friends, and personal recollections are interwoven with Hawks’ offbeat, hand-drawn illustrations. As a teen, Hawks wondered: Was it okay for African Americans to ski—or listen to Depeche Mode?

Hawks hopes the film sparks conversations about what it means to be “black enough.” An early cut of the film was screened at the Brooklyn Museum, followed by a lively discussion between the audience and the filmmaker.

Hawks’ previous film, Delilah, is an animated short about a woman who discovers that she has some African American roots—members of her family had been passing as white for decades. Delilah was named Best Experimental Film at the 15th Annual Reel Sisters of the Diaspora Film Festival in 2012.

As a college student, Hawks was an art history major who delighted in visiting New York City museums and was especially awestruck on first seeing the work of Frida Kahlo. In addition to film, Hawks creates illustrations, watercolors, and performance art, and has worked as a multimedia designer at Al Jazeera America, Wired, and other media outlets.

The filmmaker wants black enuf*, which Hawks anticipates will be shown at several film festivals this year, to challenge viewers to rethink stereotypes. Says Hawks, “Hopefully, my experience will help someone else figure out where they fit in or how they belong.”