Over forty-three years, this Board Treasurer helped secure the funding for some of the campus’s most important buildings

By Robert A. McCaughey, the Janet Robb Professor of History

Men have been accorded only a minor role in Barnard’s history, and appropriately so. The College was the idea of a young woman, Annie Nathan Meyer. Its founders and early backers were mostly women, and the original, twenty-two-member Board of Trustees was divided equally between women and men—for its time, an unusual institutional gesture toward gender equality.

Yet men are not absent from Barnard’s history. And of all the men who advanced the College’s cause, none did so as well or for as long as George A. Plimpton, who joined the original Barnard Board in 1889, and served as Barnard’s Treasurer for forty-three years. During that time, he almost single-handedly managed the College’s finances and performed as its principal fund-raiser, helping to establish the Barnard we know today.

An ambitious and engaging textbook salesman for Ginn & Company, a publishing firm over which he would later preside, Plimpton became a bookseller after attending Amherst College, a year of Harvard Law School, and another year teaching social studies in Nebraska. Often on the road visiting schools and colleges, he became well known in academic circles as a salesman with a collector’s love of books. 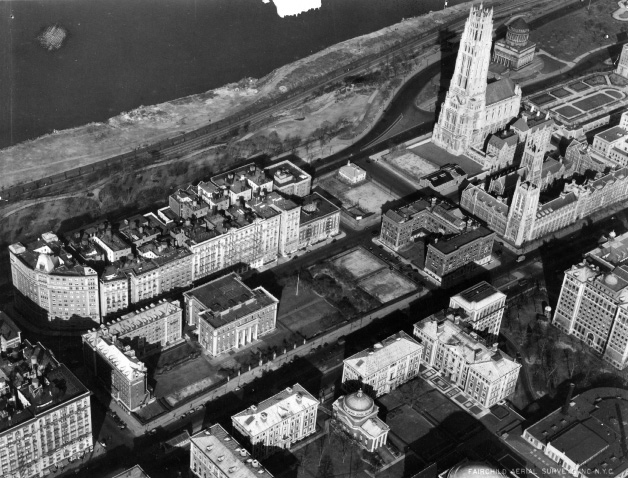 As a young Board member and businessman, in 1889 Plimpton became a member of the Board’s finance committee, then chaired by Board Treasurer and banker Jacob H. Schiff, one of the city’s foremost financiers and a leader of its German-Jewish community. Soon thereafter, Schiff despaired at Barnard’s shaky financial situation, which required annual solicitations of the same donors, and included a conditioned gift of $100,000 from Mary Brinckerhoff for a building—but only if Barnard secured a site in Morningside Heights near Columbia’s planned campus. Schiff responded to these challenges in 1893 by resigning as Treasurer. After some cajoling from Columbia President Seth Low, Plimpton took his place.

For all his success, four of his solicitations/cultivations stand out, both for the amounts of money involved and for Plimpton’s personal investment in cultivating donors. In the first, during the fund drive to purchase a site for Barnard in 1894, Plimpton made the fortuitous acquaintance of Elizabeth Milbank Anderson, the daughter and co-heiress (with her brother) of her father Jeremiah Milbank’s estate, then valued at $32,000,000. Her gift of $10,000 in 1895 completed the $140,000 needed to acquire the land between 119th and 120th Streets and thereby met the condition of the Brinckerhoff gift. Plimpton saw to it that she was asked to join the Board. Anderson did, serving until her death in 1921, most of the time as the Board’s Vice Chair.

After discussions with Plimpton, Anderson followed the successful completion of the site fund with a then-anonymous gift of $130,000 in 1895 for a second building. The following year, Plimpton secured a gift for a third building from Martha Fiske, enabling the Board to begin construction of what we now know as Milbank Hall.

In 1901, Anderson surprised even Plimpton by buying for the College the three unoccupied acres immediately south of the original site (“Milbank Quadrangle”) for $1,000,000. Five years later, when other efforts to secure funding for a dormitory fell through, Plimpton again turned to Anderson, who responded by making her last major gift to the College: $300,000 to construct Brooks Hall, named after the Rev. Arthur Brooks, the Board’s first chair and Anderson’s spiritual counselor. The Anderson/Milbank connection has since been sustained through a succession of Milbank family members who have supported the College.

Plimpton also proved successful in securing the regular support of both John D. Rockefeller, Sr., and his son JDR, Jr., in a series of challenge grants totaling several hundred thousand dollars. These were all the more impressive in light of the Columbia Board’s early failure to attract support from the Rockefeller family.

A third fund-raising coup on Barnard’s behalf was Plimpton’s quarter-century-long cultivation of Jacob Schiff. Fifty years after his arrival in America and nineteen years after he resigned from the Barnard Board, Schiff, at Plimpton’s patient urging, gave Barnard $250,000 for the construction of a Students’ Hall, now known as Barnard Hall. (The wooing involved the gift of a rare book to Schiff’s native city of Frankfurt and accompanying him on a train trip to Alaska.)

The last of Plimpton’s major cultivations was perhaps the most extraordinary. Horace W. Carpentier, Columbia College 1848, went west to California to make his fortune. By the 1870s, he owned most of the Oakland waterfront. He returned to New York City in the 1890s, where he reestablished ties with his alma mater, to which he made several gifts, including one in 1901 to endow a chair in Chinese studies. Plimpton made himself the older man’s friend and in 1903 secured him a place on the Barnard Board. When Columbia invited Carpentier to join its Board in 1906, he resigned from the Barnard Board. Four years later, after clashing with President Butler over Columbia’s refusal to name a Jew to its Board, Carpentier rejoined the Barnard Board, remaining until 1915. During those five years, he made two significant gifts in the name of his mother—both for scholarships—one of which would enable Chinese students to attend Barnard. (As Plimpton worded the gift, it was also open to other students in need). Upon his death in 1918, Carpentier left half his estate of more than $2,000,000 to Barnard and half to Columbia. That bequest, like Plimpton Hall, built and named after him in 1968, was a wonderful gift and a testament to Plimpton’s singular prowess as a patient mendicant on Barnard’s behalf. •