Setting the Standard of Care

Felice Rosser ’78 was cool. Like — impeccable style, huge Afro, feather-earrings kind of cool. Rosser, who had just finished her first year at Barnard (and later went on to become an actor and musician), had returned to her Detroit high school in 1974 to talk about college life with students. 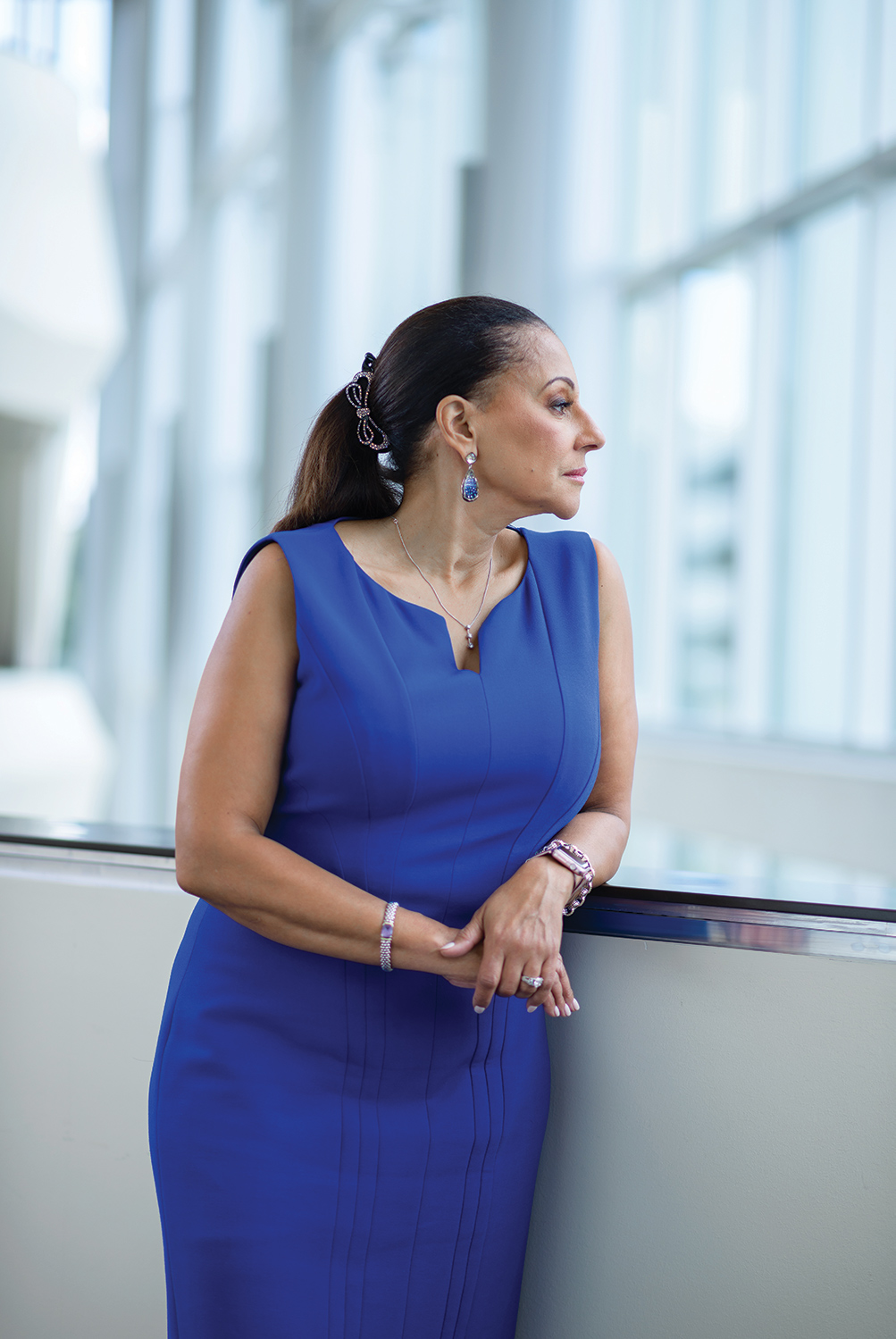 Veronica Mallett ’79 was one of them. She had already been accepted early decision at the University of Michigan. But she left Rosser’s talk with a question she was pretty positive was not collegiate: Could she achieve Rosser’s levels of cool at U of M? Mallett wasn’t sure. So she filled out a Barnard application and spent a weekend in Morningside Heights to find out.

Mallett is now, like Rosser, the kind of woman others want to emulate. The Class of 1979 alumna is dean of the school of medicine at Nashville’s historically black Meharry Medical College, the first medical school in the South to educate African Americans. Her credentials don’t stop there. Mallett is an internationally recognized expert in the field of urogynecology, which focuses on disorders of the bladder and pelvic floor. She is a fierce advocate for reducing health disparities among women of color and is also an advocate for women doctors and academics, who frequently encounter closed doors in male-dominated fields.

In fact, though Mallett’s accomplishments have ricocheted way past a word as banal as “cool,” she still feels Barnard accomplished what she wanted. “I had a very childish reason for going — because Felice Rosser was cool and I loved New York,” she says. “But what Barnard gave me, and what I got out of it, I can’t express the value.”

Pre-med and president of the Barnard Organization of Black Women (BOBW), as the Barnard Organization of Soul Sisters was then called, Mallett took full advantage of being in New York City at a time of women’s rights and post-civil-rights-era activism. (For more on BOSS, see our feature article "Soul Providers".) She was central in organizing the 1978 Celebration of Black Womanhood, a conference that brought to campus a host of accomplished women, including feminist attorneys Eleanor Holmes Norton and Florynce “Flo” Kennedy. “There were lectures, music, just an incredible weekend,” says Mallett. “Going to Barnard was a revelation of the diversity of experiences that people have outside the Midwest.”

But there were reasons to return to the Midwest, too. Specifically, to enter Michigan State University’s College of Human Medicine, in East Lansing. Ever since Mallett was 9, she’d wanted to follow in the footsteps of her pediatrician, Dr. Sarah Scotten: “She traveled all over the world, doing missionary work and vaccinating children.”

Mallett graduated in 1983, and after finishing her residency at Detroit’s Wayne State University School of Medicine in 1987, made two decisions: one, to practice general gynecology at an academic medical center; and, two, to leave Michigan and take a faculty position at Northwestern University, in Chicago.

Neither of those plans quite worked out the way Mallett intended. The reason likely goes back to a story about her childhood. Her parents had a reward system for their children’s grades: a dollar for an A, 50 cents for a B, and a spanking for a C.

As a new medical-school graduate, the ambitious Mallett still seemed to be striving toward the dollar for an A, looking beyond her faculty position at Northwestern. “I figured out that in order to get promoted and follow the path of promotion and tenure, you really had to have a research area that was going to attract funding, and a niche area that was going to be of value to your chair,” she says.

She developed an interest in urogynecology. It was a new field at the time, and Northwestern did not have a urogynecologist on staff. Mallett began to self-train, but knew she needed a fellowship if she wanted to be considered an expert. So, in 1991, recently divorced and with two small children, she took a pay cut and returned to Wayne State to accept a fellowship there.

That move was supposed to be temporary. But when her fellowship ended in 1993, she became an assistant professor at Wayne State. A year later, she took over as director of the Women’s Continence & Pelvic Surgery Center at Detroit Medical Center’s Hutzel Women’s Hospital, a job she held for six years before being promoted to residency program director in 1999 and Wayne State associate professor in 2000. 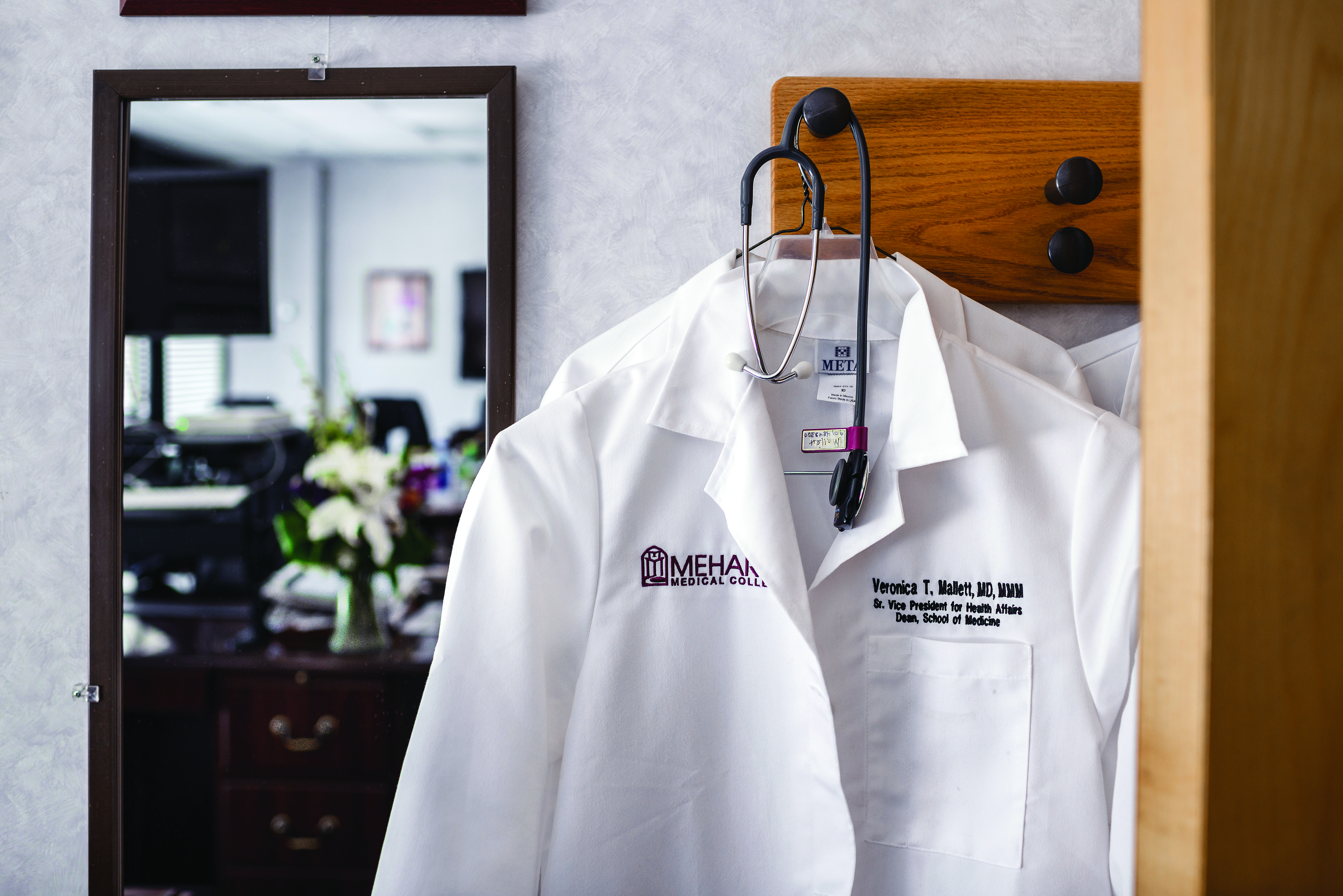 Urogynecology as a discipline spoke to her. She was an early adopter of practices to treat often-debilitating urinary incontinence. Her job enabled her to help people directly. Mallett’s first patient was a domestic worker in her seventies who did not have Social Security benefits because she had always been paid in cash. Though her patient needed to continue to work to survive, doing so was difficult because her uterus and bladder were prolapsed — the muscles meant to support them had stretched — and medical care was financially out of the question. Instead, she placed rags in her vagina to keep the organs inside. Mallett saw her at a charity clinic and fitted the woman with a device to hold up the prolapsed organs. She then found insurance that would cover the cost of her patient’s reconstructive surgery.

For Mallett, this experience set a standard of care she hopes always to reach. “When you have urinary incontinence or genital-organ prolapse, it really takes away your dignity and self-esteem,” she says. “So this is one of the most rewarding specialties.”

Mallett was the first African American woman to be fellowship-trained in reconstructive pelvic surgery. She was the first female chair of a clinical department at the University of Tennessee, where she moved in 2005. From 2011 to 2017, she served as the obstetrics and gynecology chair at Texas Tech University’s Paul L. Foster School of Medicine in El Paso.

All of these accomplishments don’t always make her work easy, though. In her professional circles, she is often one of few women, and even fewer women of color. “It’s very challenging to be a woman in academic medicine,” she says, citing statistics that only 16 percent of medical-school deans are women. Nationwide, only three African-American women serve in this capacity. She handles these challenges, she says, “by focusing on excellence, not allowing the statistics to overwhelm or define my aspirations, and honing and investing in my leadership skills so my value becomes obvious — despite whatever unconscious or implicit bias search committees might have.”

It is equally important to her that more women sit on medical-school boards, run the classrooms, and are in the operating rooms. “I have worked hard to mentor, and collaborate with, and support other women, so that I help to mitigate those statistics and overcome those barriers,” says Mallett, who left El Paso in 2017 for her position at Meharry.

Today, she and her husband live in Nashville. Day to day, her current focus is on launching Meharry’s new curriculum. But for all of her firsts and all of the women she has helped, there is one accomplishment that tops her list: Mallett’s 8-year-old granddaughter wants to be a scientist. Why? Because like her grandmom, she can spot a cool woman whose life can’t help but inspire. •

Ayana Byrd is an author who lives in Brooklyn and Barcelona.