The anthropology major (above, second from left) reflects on her nearly decade-long journey as a climate activist — from first recognizing the importance of reversing climate change in middle school to becoming a sustainability leader at Barnard College.

“Once we cross the tipping point, we’ll all be affected,” warns Delaney Michaelson ’24. “It’s time to begin selflessly collaborating —– because that’s the only way to enact real change.”

An anthropology major who is minoring in environmental science and economics, Michaelson is particularly interested in the role that local governments play in mitigating the climate crisis.

She currently heads up the Student Government Association’s Committee on Sustainability and works closely with faculty member Sandra Goldmark to implement the College’s Climate Action Vision, which is aimed at reducing waste to achieve circularity on campus. She also demonstrates how Barnard students encourage sustainable practices around food by addressing food waste and single-use plastic packaging through the implementation of policy and programming at both a campus and citywide level, moderated a student panel discussion at Barnard’s World Water Day event, and organized the College’s first-ever Earth Festival. 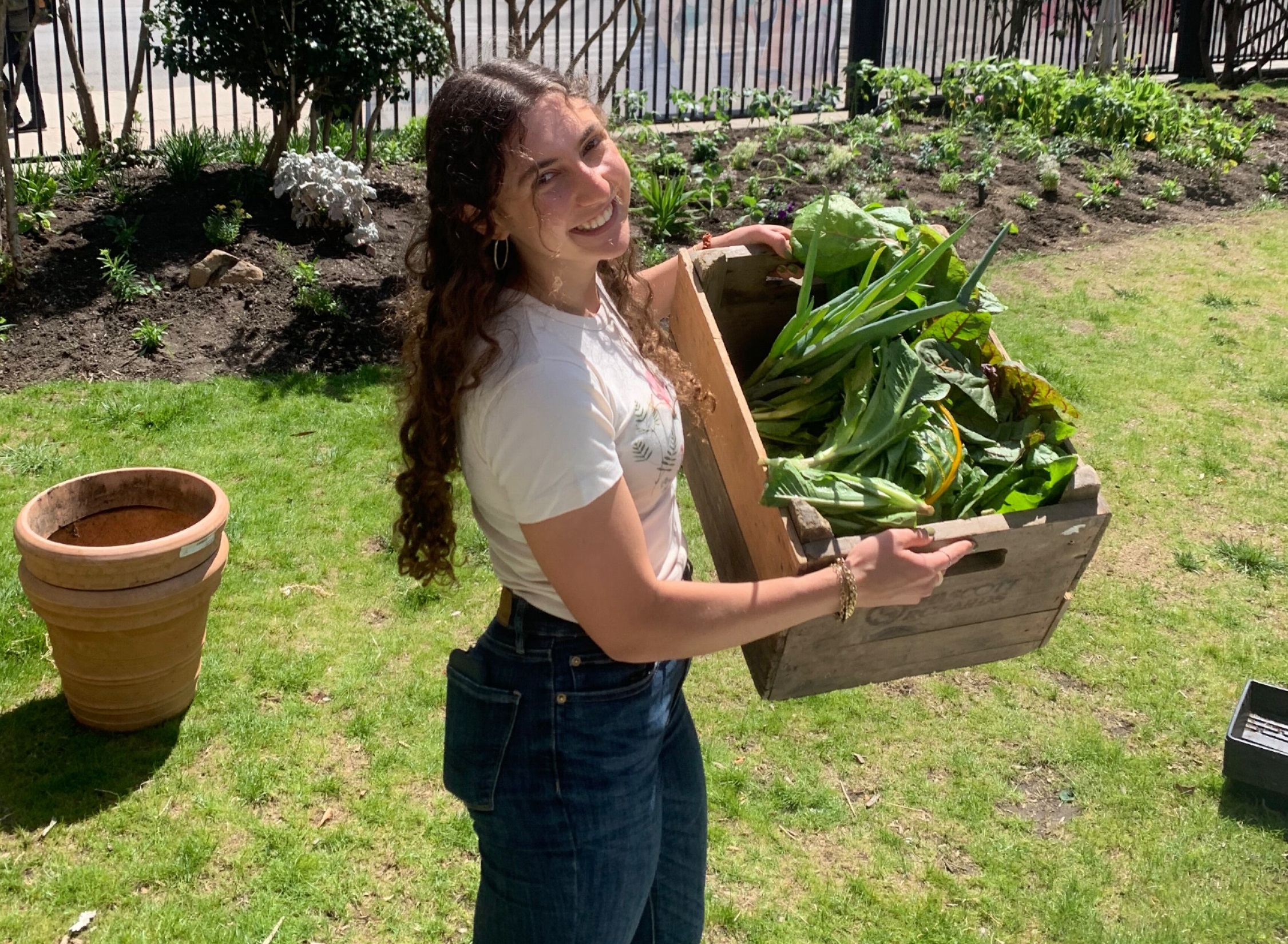 Though Michaelson has a long track record of spearheading successful environmental initiatives, she admits to getting discouraged at times with bureaucracy’s intransigence and individuals’ apathy about the problem. She says it’s essential for young people to get involved in climate conversations as there are a multitude of steps to be taken to reverse environmental degradation. That’s why, in addition to doing the work itself, she continues to actively recruit others to join the cause by amplifying the need for collective action on climate change.

Read more in the “5 Questions With ...” interview with Michaelson below.

When did you first get involved in climate activism, and what did it teach you?

I became a climate activist when I entered middle school in London, and I learned early on that it takes persistence to move the dial. Even when you achieve a goal, you have to keep going — ideally in partnership with corporations, governments, and institutions so that you’re collectively working together towards a common goal. My experiences a few years later reinforced that perseverance is imperative. It took two years to establish a composting and waste management program at my high school. And the work didn’t end there: Educating students and faculty on how to properly sort required an ongoing effort. To my high school’s credit, senior leaders were willing to take the time and make the investment for climate-friendly programming. Once I’d seen how climate activism could function within the school system, I was determined to make an impact within the greater Los Angeles community. I helped draft and propose a motion to establish a 25-person youth climate commission to, in part, uplift young female voices. We had to skip school and miss class to make it happen, but our efforts paid off: Local elected officials passed the motion, and it was adopted by the Los Angeles County Board of Supervisors.

Do you consider climate change a women’s issue?

Yes, I do. Women and girls are disproportionately affected by climate change because it amplifies existing gender inequalities, the risk of sexual violence, and various health problems. Across the globe, it’s more often women who are responsible for securing food, water, and fuel for their families, which is made more difficult by the climate crisis. There are few programs to protect the most vulnerable and, as a female activist, there are hurdles I must break down due to society’s assumptions of what I am capable of accomplishing. Since running for Barnard College student government, I have helped develop long-lasting environmental policies at the institutional level. We need effective, widespread, and aggressive climate action measures. To begin, I started by spearheading an environmental festival — hopefully to be biannual — to facilitate collaboration and foster dialogue about climate change among students, departments, and campuses. There is a generalization and perception that sustainability is exclusionary and expensive, which limits who can participate in environmentalism despite the global impacts of the climate crisis. Therefore, as students, we developed an Earth Day festival to provide the opportunity for everyone to participate in the sustainability movement while displaying Barnard’s involvement in climate action. More than 20 businesses and seven Barnard departments participated, and about 200 students attended.

Who or what is to blame for the climate crisis?

I would say that America’s corporations are to blame for the climate crisis due to society’s expectation to overconsume. As a young female environmental activist studying at a liberal arts college, I have witnessed the complexities surrounding the relationship between accountability and climate change.

Corporations are to blame. Consumers are to blame. Our government and our institutions are to blame. There is plenty of blame to go around. However, we must put aside the blame and work together, collectively and collaboratively. The work must be transformative. We must do more, and do it now. Corporations, consumers, governments, and institutions, including colleges, must step up and embrace real change and not be content with grand pronouncements and performative projects.

What do you want to say to those who are so discouraged by the climate crisis that they’re ready to give up?

I too am frustrated by the unsustained, unrealized, and uninspired efforts of corporations, governments, and institutions tackling climate change. It comes down to a lack of focused and collective action to mitigate this unprecedented crisis. I’ve worked on climate change projects and seen firsthand how the bureaucracy in governmental agencies and educational institutions is often verbally supportive but falls short of creating tangible action. This can deter us, young female activists, from pushing for real solutions, due to the inherent assumption that women cannot be global changemakers. However, institutions like Barnard, who uplift and advocate for female-identifying individuals, can push the needle towards environmental transformation. At Barnard, students work to tackle food waste and the single-use plastic packaging crisis on campus. We developed a food redistribution program to collect produce to reallocate to community fridges and food pantries. In two hours, we filled over six 5-foot-by-3-foot bins with produce donated by students that would otherwise be sent to landfills. This collective effort, initiated by female student leaders, demonstrates what young people can do to tackle the climate crisis one step at a time in the absence of institutional guidance.

Which groups are currently most affected by the climate crisis, and how can young people help?

As of right now, the climate crisis poses the most acute risks to already vulnerable groups, which, according to the U.N., includes “indigenous and Afro-descendent women and girls, older women, LGBTIQ+ people, women and girls with disabilities, migrant women, and those living in rural, remote, conflict and disaster-prone areas.” But once we cross the tipping point, we’ll all be affected. It’s time to begin selflessly collaborating — because that’s the only way to enact real change. Young people must work with leaders at a wide range of institutions as well as officials in all levels of government to achieve meaningful results that will help reverse climate change. It’s not too late to turn things around, but without demonstrative action and effective policies, climate action will not come soon enough to safeguard our planet’s future. I’ve seen how programming that demonstrates the importance of sustainability has planted the seeds needed to create systemic changes on Barnard’s campus. Young people can leverage this same collaborative spirit to engage in climate activism to save our planet.