Break This Down: Addressing Racism in the Healthcare System

Medical student Christina LaGamma ’16 discusses systemic racism in the healthcare industry and how she helped get a medical magazine to dedicate an entire issue to Black Lives Matter.

Christina LaGamma ’16, now a second-year medical student at Penn State College of Medicine, is committed to tackling systemic racism in her industry. Over the summer, she advocated for the magazine Central Pennsylvania Medicine to dedicate its entire 2020 summer issue to Black Lives Matter (BLM). Her efforts led to the creation of the “White Coats for Black Lives” issue, which features the voices of local medical students and practicing physicians, as a way to address institutional and systemic racism and advance racial justice in the medical environment. 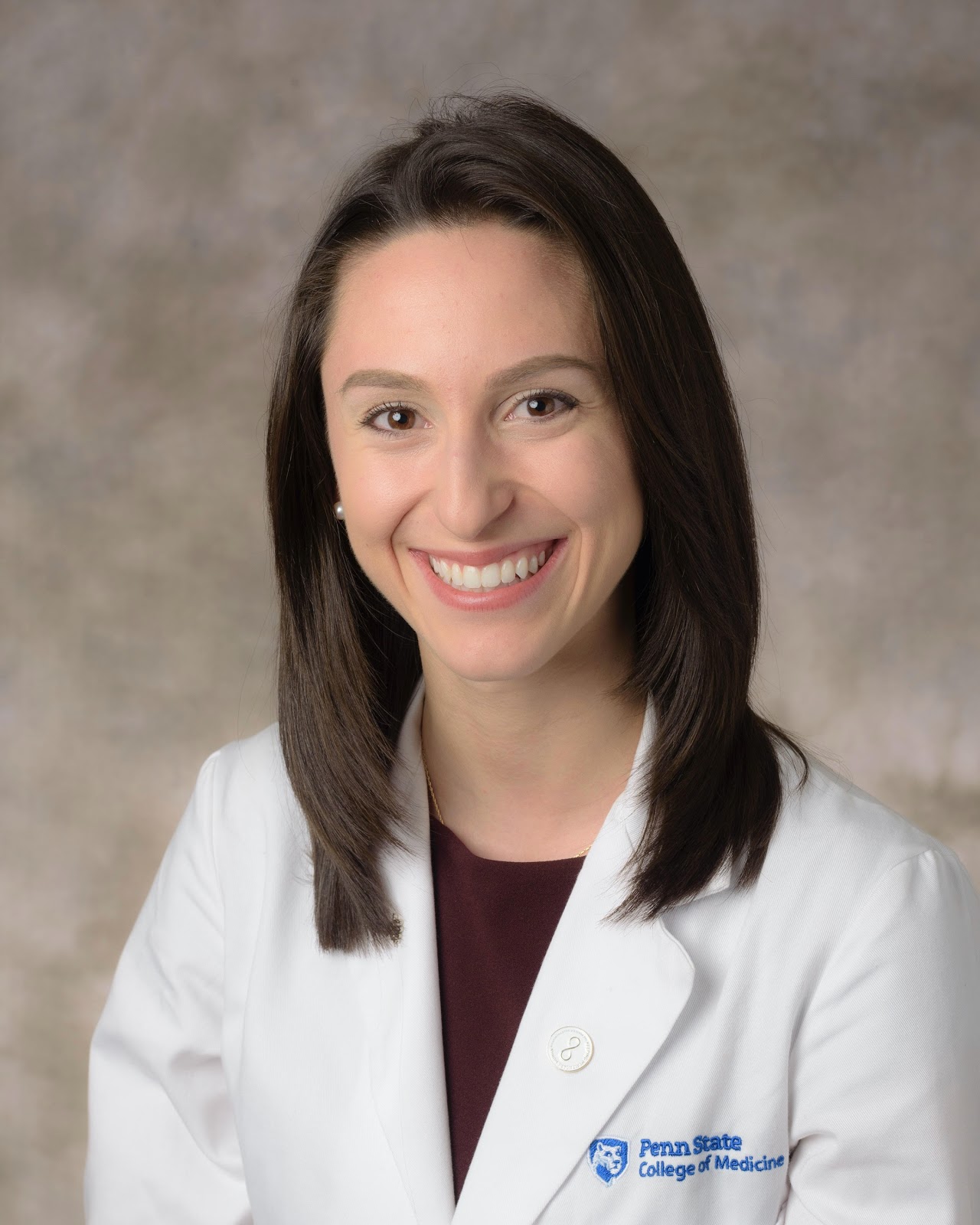 In both educational and professional medical settings, LaGamma has witnessed how racial discrimination can stymie career advancement for physicians of color and undermine their day-to-day experiences. “I’ve seen prospective students who were discouraged from attending [Penn State College of Medicine] because they learned that they may not have access to sufficient support or representation for personal and professional development,” noted LaGamma. “I’ve also heard of classmates who were told to leave patients’ homes due to unjust reasons or who were made to look like a spectacle on clinical rounds. All in all, the instances of racism I have witnessed are unsettling and left me wanting to learn how I could work with others at school to better support my colleagues and future patients,” said LaGamma.

Initially interested in double majoring in psychology and philosophy at Barnard, LaGamma chose neuroscience as the perfect blend of basic science and behavioral theory. She credits professor of psychology and neuroscience & behavior Russell Romeo’s course Systems and Behavioral Neuroscience for solidifying her decision to study the brain. “I genuinely still think back to that class and recall some of the lectures and subjects that reinforce the content I’m studying in medical school now,” she remarked.

In addition to Romeo, LaGamma also formed close bonds with professor of psychology Robert Remez (her major advisor), Samuel R. Milbank Professor Peter Balsam, for whose class Psychology of Learning she was a teacher’s assistant after graduating, and senior lecturer of neuroscience & behavior and psychology Ken Light. For her senior thesis, LaGamma used a mouse model of depression to study the effects of ketamine on a region of the brain called the hippocampus, which led to her first publication. Both during her time at Barnard and after graduation, LaGamma worked in Christine Ann Denny’s translational neuroscience laboratory at the New York State Psychiatric Institute. Over this five-year period, Denny, who is assistant professor of clinical neurobiology at Columbia University Irving Medical Center, became a close mentor.

Since starting at the Penn State College of Medicine, LaGamma has not slowed down. She currently holds leadership positions in groups such as the American Medical Association, Women in Surgery Interest Group, Neurological Surgery Interest Group, the dance group Sinus Rhythms, the Latin American Student Organization, and the Medical School Admissions Committee. Her current research projects involve assessing a remotely administered, mindfulness-based stress reduction program and measuring the impact of the COVID-19 pandemic on burnout, satisfaction, and work-life integration among physicians.

In this “Break This Down” interview, LaGamma shares what compelled her to advocate for a magazine issue dedicated to BLM, ways future physicians can fight racism, and how Barnard empowered her to pursue this important work.

What led you to medical school, and how did your time at Barnard help you define your career path?

My path to medical school evolved from a constellation of factors. The first was my own management of chronic orthopedic injuries, resulting from a 14-year career as a competitive gymnast. The second was the interactions I’ve had working with individuals who suffer from complex brain-based diseases. Through a combination of growing up in a medically oriented household and attending a religious high school during my adolescent years, I became interested in the unconventional union of science, spirituality, and philosophy to better understand the human experience. All three disciplines ask, “What does it mean to live a good life?” I felt the best way to synthesize these historically disparate disciplines and successfully care for the mind, body, and spirit of a person was to become a physician.

My first-year course Psychology and Philosophy of the Human Experience opened my eyes to the neurologic basis and metaphysical quandaries of consciousness and choice. I became a neuroscience major and worked in a translational neuroscience laboratory for three years after graduation, where I deepened my interest in diseases of the mind. Now, as a second-year medical student, my passion for exploring the intersection of science and the humanities has only grown.

I often think back to my time at Barnard and the many lessons I learned from my friends and mentors. Recently, I even reconnected with another Barnard alumna, Hye-Jin Yun ’15, who said something that resonated with the pride I have for being a Barnard graduate: “Never forget that you are a Barnard woman. We came from an institution that gave us the poise, confidence, and intelligence to speak up about challenging issues that we care about. Use this as momentum to create meaningful change in your work.”

What inspired you to push for a medical magazine issue dedicated to BLM and racism?

I was bothered that my friends and colleagues at Penn State College of Medicine could have a worse experience than I did in medical school, simply based on the color of their skin — an extrinsic factor that has nothing to do with the quality or content of the human being. It troubled me that in a considerably homogeneous central Pennsylvanian environment, versus the heterogeneous melting pot of New York City that I call home, there was a palpable mistrust and division between people of color and the majority white individuals in the area. I had never seen the divide so apparent and deeply embedded before. However, I don’t think that this is particular to our area. Medicine at large is disproportionate and imbalanced, which can negatively impact the experiences of some minorities in the field.

When I advocated for the entire issue to be dedicated to Black Lives Matter, it was met with some pushback. I was surprised to hear my peers say, “Oh, you were so brave for speaking your mind. I would have been too scared to say anything.” It just was the right thing to do. Meaningful change happens with grit, but it also happens with a strong conviction to pursue what is good, true, and fair.

What types of voices were in the issue and what specific topics were addressed?

The issue featured a collection of pieces, authored by local medical students and practicing physicians, on topics of institutional and systemic manifestations of racism and racial injustice in the medical environment. Some contributors shared stories of personal experiences confronting systemic racism in the professional medical setting. Others shared a call to action to address racial inequity within medical education and the practice of a system that can sometimes hold an inherently antiquated and patriarchal attitude.

What have you learned about the different ways that racial bias manifests itself in our healthcare system today?

While overt acts of racial discrimination still occur in medicine, subtle slips of racial discrimination and bias present themselves more often. It is not unheard of for a physician who is Black to be referred to as a janitor, even while wearing an ID badge. However, in more insidious ways, by nature of being a minority in a predominantly white field, Black, Indigenous, and people of color are often identified as deviating from “professional behavior” or erroneously labeled as “aggressive” or more “emotional” than their white colleagues. It is common. It is frequent. And it is wrong. Moreover, those who witness these incidences often succumb to the bystander effect and fail to stand up for or support their colleagues in these moments.

How should fellow future physicians view their role to affect meaningful change within their own institutions?

Medical and other graduate students underestimate the power of their own voices. One realization I’ve had in school is how scared individuals can be to speak up. Of course, there is the fact that part of our training is to uphold the manners, professionalism, and decorum of physician care. But I’ve also observed an abdication of duty or responsibility to intercede in problems of our society, as if we’ve been robbed of the very motivation that prompted us to apply to medical school.

My advice for fellow physicians to affect meaningful change is to be bold, be brave, and lean into your intuition. Sometimes I struggle with imposter syndrome — do I really have a place in advocating for social and racial justice? What is my purpose in speaking up at all? After critical self-reflection and conversations with numerous mentors, friends, and colleagues, I think the answer lies in allyship and in uplifting the voices of those who have experienced traumatic events or shared similar experiences. When people who do not fit a certain stereotype speak up alongside others with the empathy, understanding, and conviction needed to sway opinion, that’s when real teamwork starts to happen and collaborative change can root itself and begin to grow.

I’ve found that the times I’ve been most vulnerable, genuine, and authentic with faculty in the Penn State community are when I have garnered the most respect for my thinking — and that is what we should strive for. I firmly believe that perseverance and tenacity are the key to all success. There will always be naysayers and defensive people. But if you make the time to do the introspective work to discover your core beliefs, and speak with trusted mentors who can help guide you, then you have a solid and legitimate foundation from which to speak. Medical students like myself need to remember that we have objective value and merit, that should not be diminished by race, rank, age, or gender. Remembering this will enable us to converse with people who disagree with us and hopefully change their minds. Show up. Attend the meeting. Listen to others. Speak your mind. Practice your manners. Be vulnerable. Be brave.

As medical students, we are tomorrow's practicing physicians, and we must work together to make the profession more equitable for our colleagues and patients. My goal is to continue prioritizing being a better learner, a better ally, and a better version of myself each day. I owe a lot of this confidence to Barnard for making me realize that this change is possible.

Medicine
Break This Down
Alumnae
Race and Ethnicity