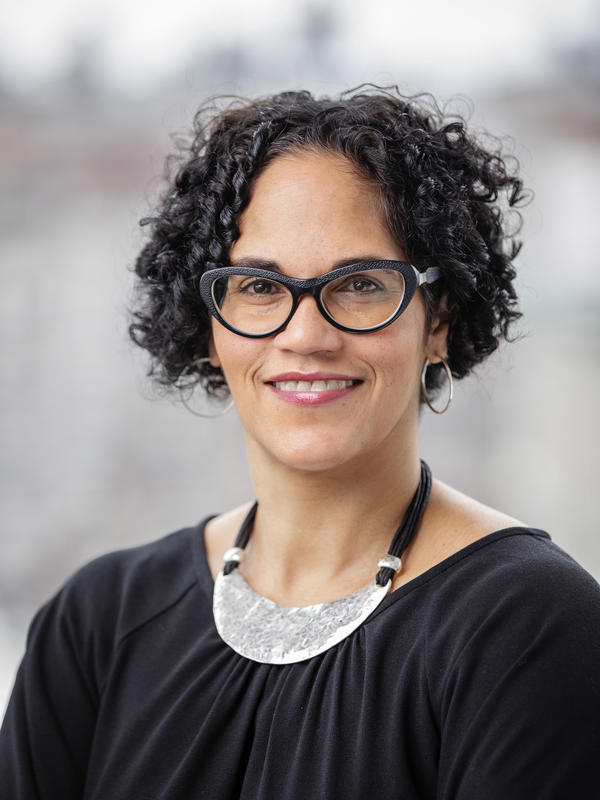 Monica L. Miller, Professor of English and Africana Studies, joined the faculty of Barnard in 2001.

Her book, Slaves to Fashion: Black Dandyism and the Styling of Black Diasporic Identity, was published by Duke University Press in 2009.  It  received the 2010 William Sanders Scarborough Prize for the best book in African American literature and culture from the Modern Language Association; it was shortlisted for the 2010 Modernist Studies Association book prize.

Professor Miller is the recipient of grants from the Andrew W. Mellon Foundation (2012, 2001), the Schomburg Center for Research in Black Culture (2004), and Woodrow Wilson National Fellowship Foundation (2004). She served as a Term Fellow at Institute for Research in African American Studies, Columbia University (2011-13).  She was the recipient of the Gladys Brooks Junior Faculty Excellence in Teaching Award, Barnard College (2008).

She is currently at work on Blackness, Swedish Style: Figuring Blackness in a Place without Race, which is a multi-genre investigation of multiculturalism, integration, and Afro-Swedishness in relation to Black European Studies and theories of diaspora and diasporic belonging.  Documenting and theorizing the emergence of “blackness” in a place that has no obvious or well-developed colonial or imperial history, Blackness Swedish Style thinks differently about “diaspora” and the identities that emerge from it.  Investigating connections and disconnections between Europe, Sweden and its African Diaspora, as well as among AfroSwedes themselves, this book is a diverse volume consisting of theory, ethnography, memoir, (oral) history, and contemporary cultural criticism.

“On paper, we are parentheses into which someone else has placed us’: Black Swedish Memoir and the Rhizomatics of Race.” Sketches of Black Europe: Imagining Europe/ans in African and African Diasporic Narratives. Blankensee Colloquium, Leibniz-Zentrum für Literatur-und Kulturforschung. Berlin, Germany. March 2022.

“ 'Black is black not blue or purple/being black is like a circle': Geometries of Black Swedish Identity." Keynote lecture, ASTRA (Association of Swedish Teacher of America). University of Wisconsin, Madison, Department of German, Slavic, and Nordic Studies, October 2021.

“On paper, we are parentheses into which someone else has placed us’: Black Swedish Childhood and Performances of Race.” Plenary lecture and seminar. Mellon School of Theater and Performance. Harvard University, Cambridge, MA. June 2021.

“Pink in African American Music and Culture: How a Color Transcended Gender, Sexuality, and Generations One Hue at a Time” with Elena Romero.  Invited conversation. PINK: The History of a Punk, Pretty, Powerful Color Symposium.  Fashion Institute of Technology, New York, NY. October 2018.

“A Raisin in the Midnight Sun.” Rethinking Lorraine Hansberry: New Work on her Writing and Legacy in the 21st Century. American Studies Association. Chicago, IL. November 2017.

“ 'Serving ‘AfroScandinavian Fresh’: Krull Magazine and the Emergence of Black Swedish Style.” Exploring Beauty and Truth in Worlds of Color: A Conference on Race and Aesthetics in the 21st Century (American Aesthetics Association).  Oberlin, OH.  September 2017.

Winner of the 2010 William Sanders Scarborough Prize for the best book in African American literature and culture, Modern Language Association.

“The Grain of her Voice: Nina Simone, Josette Bushell Mingo and Intersections between Art, Politics, and Race, with Anna Adeniji, Barbara Asante, and Anna Lundberg.PARSE, special issue on Intersectional Engagement in Politics and Arts (11, Summer 2020).

“On Having Your Cake and Eating It Too: Black (Diasporic/Nordic) Arts,” Social Text: Periscope ‘Shady Convivialities’ on Tavia N’yongo’s Afrofabulations (January 28, 2020).

“Archaeology of a Classic: Zora Neale Hurston and Their Eyes Were Watching God at 75.” Barnard Magazine, December 2012.

““Slaves to Fashion.” Interview with filmmaker Stacey Holman for “Dressed Like Kings,” a documentary on the Swenkas, a group of South African dandies. August 2012.

Professor Monica Miller is a sought-after style educator who consulted on two projects debuting this August in London.

With only 2% of STEM jobs held by Black women nationwide, Barnard community members discuss the importance of mentoring and retaining Black women who are interested in the sciences.

The recent inductee into the American Political Science Association’s Minority Fellows Program is determined to use the skills she acquired at Barnard to improve public policy and everyday lives.

To coincide with Shange’s first posthumous book, Dance We Do: A Poet Explores Black Dance, the College is hosting several events through the two-year-long Shange Magic Project.