A Fearless Leader, A Dedicated Alumna

Longtime trustee Nancy A. Garvey ’71, who rose to top leadership positions at General Motors and AlliedSignal, blazed a trail for female executives 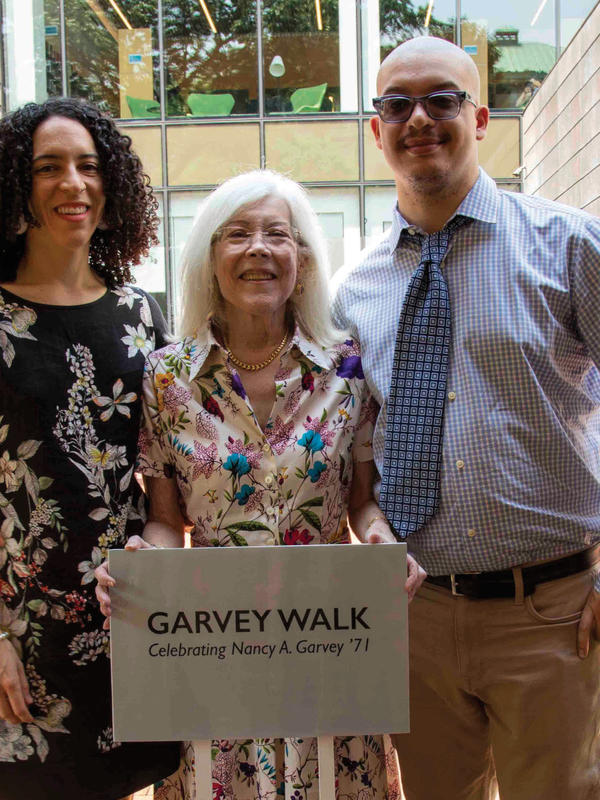 When Nancy A. Garvey ’71 accepted her Joan Rivers ’54 Trailblazer Award in 2018, she had some insightful words to share with students. “The advice I give to today’s Barnard student is ‘go for it’ in every sense of the word. Try what you want to do. It doesn’t matter if you fail. You have lots of time, lots of chances, and if you don’t succeed the first time, try, try again.”

For Garvey, who served on Barnard’s Board of Trustees for over a decade, this advice came from lived experience. Garvey, who died on July 4, 2022, following a courageous six-year battle with cancer, was a groundbreaking executive. Throughout her career, she did indeed “go for it,” rising through the ranks to leadership roles at several major corporations at a time when few women did.

A dedicated alumna, Garvey joined the Board of Trustees in 2008 and began serving as chair of the Budget and Finance committee in 2013. Garvey earned her doctorate in economics at Columbia University in 1980, where she later taught. She long devoted her time and energy to giving back and advancing women’s progress by serving on a number of boards, including the New School, Pace University, and the Bronx Preparatory Charter School.

Garvey went on to an impressive career at General Motors and AlliedSignal (now Honeywell), where she served as the Staff Vice President, Investor Relations, and Vice President and Treasurer, and ended her tenure there as Vice President and Controller. At the company, she broke the glass ceiling as one of the top 13 people among 14,000 corporate employees and one of only two women among the senior leadership.

In June 2022, Barnard named a prominent corridor on campus the “Nancy A. Garvey ’71 Walk” and established a science endowment fund in her honor to support future science facilities expenses at the College. In attendance at the dedication ceremony were Barnard faculty, staff, alumnae, trustees of the board, and Garvey and her two children, Katie and Zach [in photo above]. Ellen V. Futter ’71, Barnard’s fifth president and a close friend of Garvey’s since their College days, fondly recalled the many afternoons spent together on the campus green — officially named “Futter Field” in 2019, a designation that Garvey initiated and helped to establish, along with the Ellen V. Futter ’71 Leadership Fund. “Standing here now on this very spot evokes a flood of happy memories of Nancy and me,” said Futter. “And now this walk at the very heart of the campus and College — sandwiched between the glorious Milstein Center and this field — my cup runneth over, that we shall be side by side.”

The walkway, which Futter described as “the byway of Barnard,” is an apt tribute to Garvey, who demonstrated leadership in the public and private spheres, as a corporate executive, a philanthropist, and a trustee of the College, guiding and showing women, by her own example, the path forward. “How appropriate, how right, how utterly perfect,” said Futter, “to have the Nancy A. Garvey walkway.”