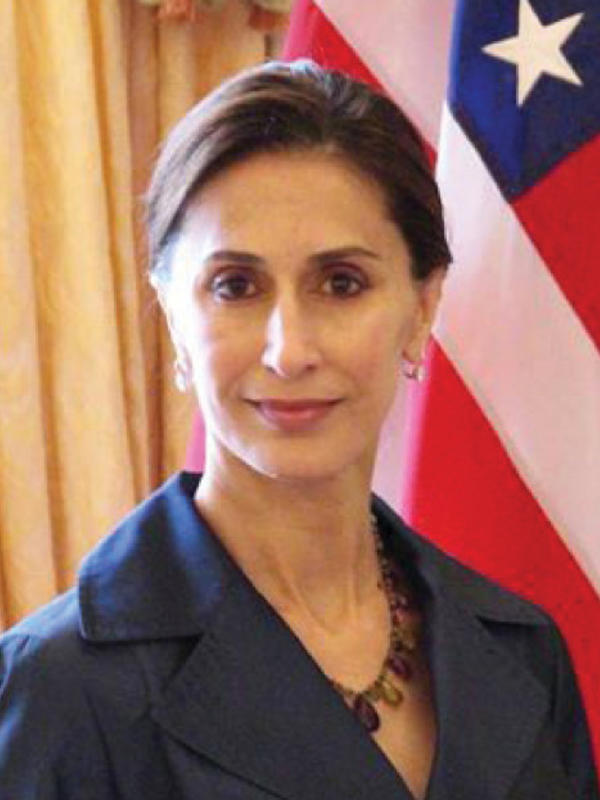 In a tribute video, Jim Townsend, the former deputy assistant secretary of defense for European and NATO policy, aptly described Azita Raji ’83, who was being honored with the Joan Rivers ’54 Trailblazer Award in 2020, as “a force to be reckoned with.” For friends, family, and co-workers, these words rang true: She was a force not only in her diverse and successful career as a banker, investor, philanthropist, and diplomat but also as a friend, mother, and wife. Raji died on February 6, 2022, at the age of 60, of metastatic breast cancer.

Raji grew up in Iran and then moved to Lausanne, Switzerland, for high school, where she competed nationally in skiing and chess. Upon graduating, she attended Barnard, majoring in architecture and French. She went on to earn a Master of Business Administration from Columbia in 1991, three years after she became a U.S. citizen.

She excelled throughout her career as an international investment banker, with senior positions at Drexel Burnham Lambert, Salomon Brothers, and JPMorgan. She was a member of the Bretton Woods Committee, which supports international finance institutions such as the World Bank and the International Monetary Fund. Raji volunteered as a fundraiser for Democratic candidates, including former President Barack Obama. She raised nearly $8 million for Obama, becoming one of his top donor-fundraisers, and served as national finance vice chair and chair of the Swing State Victory Fund for his campaign.

Friend and fellow Barnard trustee Maryam Banikarim ’89, P’21, remembers Raji’s passion for civic engagement and commitment to a broad swath of issues, including human rights. “When Azita committed to something, she just went all in,” says Banikarim. “She was that way as a friend too; she brought people into her orbit and was there for them, without expecting anything in return.”

Raji gave both her time and energy to a wide range of organizations, including Barnard, where she served as a trustee as well as founding co-chair of the Athena Center for Leadership. She also served on the economic advisory council of the Center for American Progress, as director of the National Partnership for Women & Families, and and as a commissioner for the Smithsonian Portrait Gallery. Her achievements were widely recognized with awards such as the 2016 Carnegie Corporation of New York Great Immigrants award and the 2017 Ellis Island Medal of Honor.

When President Obama named Raji as ambassador to Sweden, she became the first female U.S. ambassador to that country as well as the first Iranian-born American to serve as a U.S. ambassador. During her ambassadorship, she was nominated for the Sue M. Cobb Prize for Exemplary Diplomatic Service, the State Department’s highest award for a noncareer ambassador. “She was the best ambassador we ever had to Sweden. She showed the world how it’s done,” said Townsend. “She served her country well.”

Raji’s love of country is reflected in a 2017 op-ed she penned for Newsweek: “I want everyone who saw the U.S. as a country where justice, accountability, and respect for human dignity were honored at every level of government and society to continue to see us that way.”

Her two daughters remember a mother who was loving and inspired. “My mom’s impact on the world is endless, from her contributions to helping women at Barnard, to helping Iranian women as a role model and Swedish women as a leader,” says her older daughter, Gabriella Syman. “She had something she called soft power, which she described as being able to lead with kindness, not force.”

Elena Syman ’18 adds, “She broke barriers and showed that you can be powerful and whip-smart while also being inquisitive, humble, and down-to-earth. She infused love and warmth into every day she was with our family.”

In addition to her daughters, Raji is survived by her husband, Gary A. Syman; a brother, Reza Raji; three stepdaughters, Kimberly Syman, Stefanie Syman, and Hillary Syman; and seven grandchildren.