Jack Hawley has spent his career immersed in the religions and literature of northern India. His fascination with the topic was sparked by a course on world religions he took in the 1970s as a graduate student at Harvard. He decided, he says, to delve into “something that would be big enough that I knew I couldn’t possibly understand even some tiny segment of it. All these years have passed, and it’s still just as big as it ever was.”

For more than three decades, Hawley, a professor of religion, has studied the work of one of the most prominent literary figures in his field: Surdas, the 16th-century Hindi poet. In 2015, Harvard University Press published Sur’s Ocean , which he worked on with Kenneth E. Bryant of the University of British Columbia, as one of the inaugural books in the Murty Classical Library of India. The series offers accessible English translations of the most important texts in Indian literature, many of which have not been available in English before. Sur’s Ocean , for which Hawley provided the translations, is a 1,000-page collection of poems attributed to Surdas, who was already legendary in his lifetime. “What poet, hearing the poems Sur has made, will not nod his head in pleasure?” wrote one near-contemporary observer.

The poems of Surdas were almost always sung, not just read or recited, and the poet himself must have been a singer, says Hawley. He and Bryant reconstruct a version of Sur’s Ocean that is closer to what Surdas originally sang than other editions, which have failed to distinguish between the many “Surdases” who later composed in his name and the early poems that can more reliably be associated with the man himself. “It was a huge task—collecting manuscripts, digitizing manuscripts long before anybody digitized anything,” notes Hawley, who is celebrating his 30th anniversary at the College this year and won a Barnard Teaching Excellence Award in 2013. “It provided us with the opportunity to uncover the earliest manuscripts and stick with those. No one had really done that before.”

At the end of this year, the Harvard Oriental Series will publish the last big piece in Hawley’s Surdas puzzle: Into Sur’s Ocean . “Every poem has an essay that goes with it,” he says. Last year also saw the publication of A Storm of Songs , a book that scrutinizes commonly held convictions about how the bhakti religion—the religion of shared singing, heartfelt personal devotion, and sometimes social protest—marched through India’s history for a thousand years, beginning in about 600 C.E. Received wisdom says that this bhakti movement, something broader than Hinduism yet also indelibly a part of it, is what supplied the core of India’s national identity long before the nation itself came into being. It tied Surdas to hundreds of other poet-saints. Hawley challenges this view of history, and shows that the idea of something like a bhakti movement didn’t begin to take shape until the 16th century and came into clear focus only in the 20th.

Hawley will spend the 2016-17 academic year in India, where he will study Brindavan, a sacred Hindu site and the location of his early research into practices associated with the worship of Krishna. Once a pastoral wilderness that is featured in tales of Krishna’s boyhood, Brindavan today bears the marks of globalization and is in danger of being choked by the sprawl of nearby Delhi.

The intersection of religion and urban centers is the subject of several of Hawley’s courses. He has frequently offered one on “Hinduism Here”—in New York—and is co-teaching another ethnographic seminar on New York religion as a whole with Courtney Bender, chair of Columbia’s Religion Department.

The sabbatical year will also allow Hawley to pursue a recent discovery—an immense trove of illuminated manuscripts from western Rajasthan that depict scenes from Surdas’ poems, as well as Surdas himself, through a rich interplay between imagery and text. Says Hawley, “There are always surprises, which is the great thing about scholarship.” 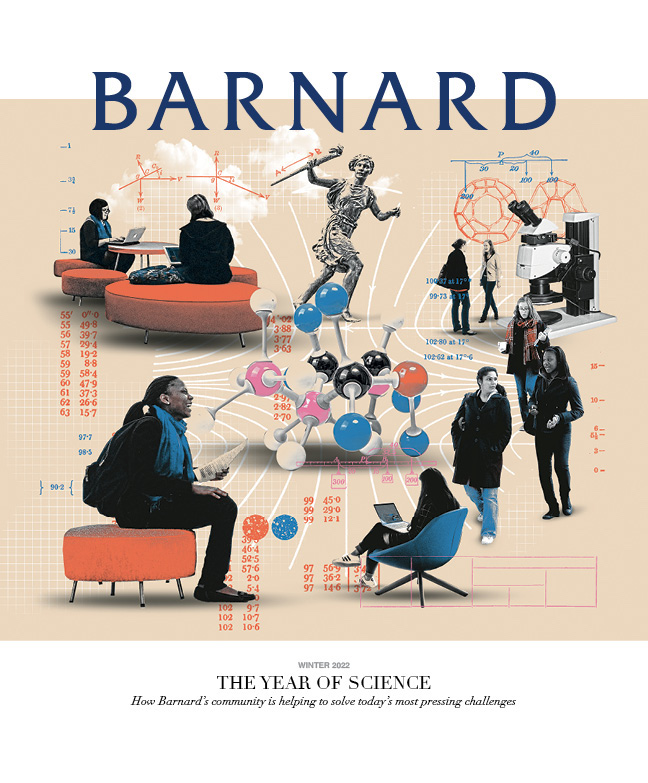 This issue is dedicated to the Barnard Year of Science (BYOS), a campus-wide celebration of all things related to science, technology, engineering, and math (STEM). In recent years, we’ve witnessed the discoveries and the innovation that science has helped usher into the world. Whether through scholarship or professional endeavors, the Barnard community has been integral to these pursuits, influencing the vast world of STEM, from astronomy to neuroscience. In these pages, we learn about how students, faculty, and alumnae are contributing to today’s scientific opportunities while actively working to solve some of the most pressing questions of our time.