Smith College professor Erin Pineda ’06 discusses the politics of civil disobedience and the global research on resistance movements central to her new book, Seeing Like an Activist.

January 2021 marked the 35th celebration of Martin Luther King Jr. Day, as many in the nation reflected on a year beset by racial injustice and health inequities exacerbated by COVID-19. These global crises shaped the ongoing conversations around civil rights activism and the power of protest, renewing the spotlight on civil disobedience and international solidarity. For Smith College assistant professor of government Erin Pineda ’06, the legacy of civil rights activism is also one that reverberates and persists around the world. 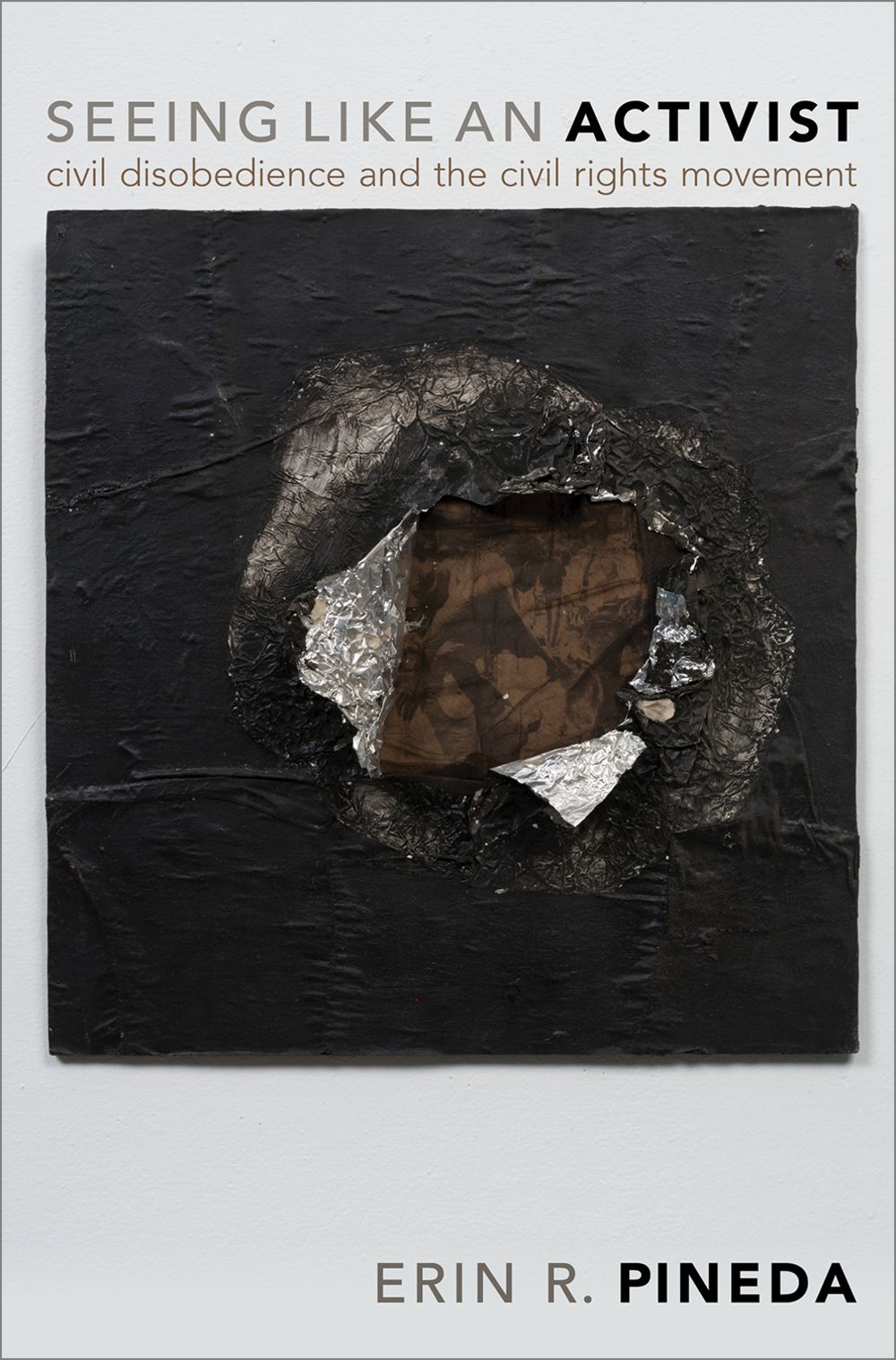 Pineda’s research interests include the history of Black political thought and the intersections between protest movements across history. In her recently published book, Seeing Like an Activist: Civil Disobedience and the Civil Rights Movement, Pineda offers an in-depth exploration of the civil rights movement of the 1950s and 1960s in the United States and the global connections forged between activists here and anti-colonial activists advocating for racial justice and decolonization abroad. Pineda also works to recontextualize political theories about civil disobedience within these international and interconnected histories of activist struggles.

In this “Break This Down” interview, Pineda shares her insights on the power of nonviolent protest and the relationships between resistance movements around the globe.

Why did you decide to approach civil rights activism and protest from a global perspective in Seeing Like an Activist?

One of the puzzles that I encountered while working on my book is the gap between what we know, historically, about the civil rights movement and how the movement is positioned in political theories that use it as an example. It is well known, for example, that Martin Luther King Jr.’s philosophy of nonviolent direct action and civil disobedience was influenced by Mohandas K. Gandhi and a mass movement against colonialism in India. We also know that there were many points of contact between civil rights activists in the United States and anti-colonial and anti-apartheid activists across the world — those in India, in South Africa, in Ghana, and so on.

But when academic political theorists in the 1960s and 1970s worked out their theories of civil disobedience, inspired, in part, by the civil rights movement, these international connections disappeared. So the questions I wanted to address were: Why did these connections disappear? What assumptions were political philosophers making about their subject matter — about the movement or about civil disobedience itself — that allowed the global context to recede from view? And finally, how would a theory of civil disobedience change if we took this context into account or made it central to the story?

In the book, I argue that many political theorists of civil disobedience ignored the international context because of the way they understood the philosophical problem posed by civil disobedience. They contended that, in a liberal democracy, there are procedures and laws that protect everyone’s rights and that every citizen has an interest in maintaining. These procedures and laws are imperfect, because they are made by humans and are the product of complex forms of collective action, but they are overall legitimate. Ordinarily, then, we shouldn’t break laws — even bad ones — in protest. So the puzzle of civil disobedience is: In a legitimate liberal democracy, what are the conditions that justify breaking laws that you ordinarily should not break? What specific conditions of injustice make that sort of protest acceptable?

What I try to show is that, for civil rights activists, their connection to anti-colonial activists wasn’t just an incidental, historical detail. It shaped how they thought about racial domination and why they thought civil disobedience was a meaningful way to contest it. The activists I study saw Jim Crow as fundamentally tied to colonialism, not cut off from it. Both were systems that benefited a white elite who exploited and plundered to their benefit and who held the system in place using fear and violence. In this context, civil disobedience offered a grassroots form of action that could confront that kind of regime and transform it — decolonize it — by transforming individual subjects, their relation to each other, and the institutions that order their lives.

Why is civil disobedience such a powerful form of resistance for activists?

I think there are lots of ways to think about this question. For figures like Martin Luther King Jr., civil disobedience and nonviolent resistance were powerful because they could be used by many different kinds of people. This is not to say that engaging in civil disobedience is available to all persons. Moreover, the risks posed by protest — being subject to violent backlash, police repression, and arrest — are experienced unevenly by practitioners; some are more vulnerable than others. But compared with other forms of organized resistance, it is relatively open and accessible, allowing a wide array of people to engage.

In the book, I also trace how activists tried to use civil disobedience to transform others and institutions. Civil disobedience can create public disruptions, or crises of order, through which activists can interrupt the functioning of institutions and leverage concessions from those in power. Activists are usually less powerful than those they are up against, so they need a way to make the status quo more costly to maintain or defend than it otherwise would be. Equally important is that public disruption creates possibilities for those accustomed to seeing the status quo as natural to see things in a different light. Civil disobedience [doesn’t] just disrupt order, it dramatizes and discloses the ordinarily obscured and disavowed forms of repression, violence, and domination that define the existing order. Drawing this violence out into public view forces people to reckon with it and decide whether they want to take responsibility for changing it.

How have the Black Lives Matter movement’s mass protests against police brutality impacted conversations around civil disobedience and the politics of protesting?

When protests unfolded last summer, the first dynamic that played out was a familiar one — the 1960s civil rights movement as a disciplining example, invoked to call out contemporary protestors for protesting in the “wrong” way. The mayor of Atlanta, for example, suggested that the protests in that city were a rebuke to the “legacy” of Martin Luther King Jr. and of the civil rights movement because there was property destruction and looting there. As I argued in the London Review of Books blog last June, the 1960s civil rights movement often circulates through public discourse in this way — decontextualized, with a view toward delegitimizing whatever is taking place on the ground and, often, justifying the use of state violence against it.

On the other hand, I also noted important shifts in public conversations that were starting to occur. I saw a lot more discussion about the dangers of the disciplining uses of the civil rights example and how it perpetuates racialized assumptions about who does and does not count as “civil,” “nonviolent,” or worthy of protection. I saw a larger, and more engaged, public debate over whether or not property destruction ought to be counted, automatically and without qualification or discussion, as a form of violence. As the protest unfolded in the context of COVID-19, I also saw more nuanced discussions on the forms of violence that don’t often get counted as violent — the forms of “organized abandonment,” as Ruth Wilson Gilmore puts it, that construct the conditions of vulnerability and deprivation routinely faced by marginalized and criminalized populations.

Also remarkable was the level of public support that the protests enjoyed, both in their immediate context and in their wake. A Pew Research Center report found that 67% of surveyed U.S. adults expressed support for Black Lives Matter in June 2020. While that figure had declined to 55% by September, this was still incredibly high. We have to put it in historical context and compare it to how U.S. citizens react to and feel about mass protest for racial justice.

In 1961, Gallup surveyed the level of public support for the Freedom Rides — now considered one of the hallmarks of legitimate, sympathetic, civil protest — and found that 61% disapproved of them. A 1963 poll for Newsweek surveyed white attitudes toward the civil rights movement’s tactics and reported that 67% disapproved of lunch counter sit-ins; 56% disapproved of going to jail in order to protest discrimination; and 55% disapproved of boycotts. These are the same tactics that many people view as uncontroversial today — and the same events that many people hold up as exemplary of the “right kind” of protest.

With this in mind, the wide public approval of last summer’s protests, and expression of support for Black Lives Matter more generally, is actually quite notable. It is a real testament to all the work that organizers have done within the movement over the past six or seven years.

Has the COVID-19 pandemic, as well as the continuing global movements for racial justice, changed the scope of your research? If so, how?

Fortunately, I was nearly finished with my book when the pandemic hit the United States last February, and faced very little disruption — relative to other kinds of researchers — in terms of my work.

As far as the ongoing movements for racial justice across the globe, this has not so much changed the scope of my research as underlined or emphasized some of the ideas and topics to which I am committed. It intensified my commitment to studying mass politics and grassroots activism and clarified the stakes of doing so in the contemporary moment.

What were some of the most important insights you shared from civil rights activists on fighting for liberation, justice, and decolonization?

One thing I have learned by thinking with the activists I study is that there is only so much meaning that is contained in the form of action itself. Civil disobedience as a tactic isn’t, on its own, good or bad and doesn’t have a ready-made meaning that travels across all contexts. Activists remake civil disobedience for their own purposes all the time: They rethink how to use it, what it means, and how it works, within the particularities of their own context. This is what makes it still alive in the present rather than a relic of the past without use for our own time and place.

Activism
Break This Down
Alumnae