Professor Manijeh Moradian, author of a new book on Iranian revolutionaries in the U.S., examines the current feminist uprising in Iran.

For nearly three months, images of Iranian women protesting have proliferated across the globe. They show women removing and burning their headscarves, cutting their hair, and taking to the streets en masse. These demonstrations erupted on September 16, in reaction to the death of Mahsa Amini. Amini, whose Kurdish name was Jina, was arrested by Iran’s morality police for wearing an “improper” hijab and died in custody shortly thereafter. 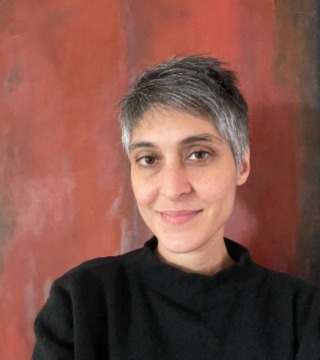 While Amini's death was the catalyst for the current movement, it has roots in earlier, significant protests, such as the women’s uprising on International Women’s Day in 1979 in Tehran. Manijeh Moradian, assistant professor of women’s, gender, and sexuality studies, examines this history in her book, This Flame Within: Iranian Revolutionaries in the United States. Published this month, the book analyzes the Iranian student diaspora in the United States in the 1960s and 1970s through a transnational feminist lens.

In this “Break This Down” interview, Moradian explores the current women-led movement in Iran (“There is a basic demand to live differently, to live without fear. And this feeling of defiance, this bodily enactment of freedom that so many people have engaged in through protest — this is very hard to undo”) and how it is informed by the 1979 protests.

Catch us up. How have the protests spread, and where do they stand now?

The protests began in the Kurdish Iranian city of Saqqez, Jina’s hometown, and spread to every city and even small towns.

It was there that the Kurdish slogan “Jin, Jian, Azadi” (“Women, Life, Freedom”) was chanted over Jina’s grave by her relatives and community. The outrage over the destruction of a woman’s life over the rigidities of “proper” hijab swept the nation because every woman in Iran knows the daily experience of vulnerability to state surveillance, control, humiliation, and punishment.

The government has killed over 300 people, including 50 children. There are over 15,000 protesters and dissidents in prison, including journalists, and these are overwhelmingly young people. Several people have been beaten to death in prison.

We now have a women-led movement of vast sections of Iranian society who reject the rule of the Islamic Republic.

Iranian women have been challenging the hijab rule since it was introduced in 1983. What makes this movement particularly unique?

Actually, the first protests against compulsory hijab erupted in March 1979, weeks after the Shah left the country and Ayatollah Khomeini returned from his exile in Paris, and before the establishment of the Islamic Republic. It wasn’t until 1983 that the government consolidated enough power to fully implement compulsory hijab.

What is different now is that the current uprising began with and centers women’s demands for bodily autonomy and equal rights. The average age of protesters is 17, and they want to completely transform the conditions of their lives.

They are not asking for reform but for an end to the Islamic Republic form of government.

What has already changed is the culture: the way women see themselves and each other and how women and men are transforming their ways of interacting.

How do you imagine the protestors’ demands evolving, considering that their activism was sparked by the demand to expand women’s rights?

Compulsory hijab is an ideological pillar of the Islamic Republic, and because of this, opposition to the state control over women’s bodies has become a lightning rod for a wide range of grievances against the government. As Audre Lorde famously said, “There is no such thing as a single-issue struggle, because we don’t live single-issue lives.”

This is not really a “women’s rights” movement in the sense of women asking for more rights from the existing state. The use of deadly violence against Jina symbolizes all of the violence and injustice of the government: its oppression of Kurds, Baluchis, and other minorities; its economic corruption and callousness towards poor and working-class people; the pollution of the environment; the decline in living standards; censorship; laws against dating and socializing among men and women; laws against queer people and the state regulation of trans people. This has become a moment in which the disparate histories of marginalization and state repression faced by different groups is fueling a national uprising.

From researching This Flame Within, about the Iranian foreign students’ protests during the 1960s and 1970s, do you see any lessons from that movement that can inform the current protests?

One key lesson from 1979 is already unfolding in the current uprising in Iran: the need for a capacious vision of freedom that centers the liberation of women and ethnic and religious minorities. Much of the Iranian left initially supported the Islamist leadership as an authentic cultural representative of the people. The fact that so many Iranian students who returned from abroad to join the 1979 revolution did not really question compulsory hijab or the suppression of the Kurds by the new revolutionary government shows how much they adhered to a hierarchical version of anti-imperialism that placed national sovereignty above issues of equal rights or democracy.

We are now seeing an emphasis on the exact issues that were deemed secondary 43 years ago. This historical arc underscores the significance of current revolutionary desires.

Do you see this as a tipping point in Iranian culture and politics?

Iranian society has changed irrevocably. Not only are women openly and brazenly defying compulsory hijab every day en masse, but the fear that kept people in line is gone. Young people have risked everything to try to change the direction of their society. What has already changed is the culture: the way women see themselves and each other and how women and men are transforming their ways of interacting.