Political leader Stacey Abrams joined President Beilock in an exclusive conversation, presented by Beyond Barnard, to discuss leadership in a crisis, the census, and advice to the Class of 2020.

Meet adversity and meet challenges not by pretending it doesn’t exist, but by acknowledging it, by excavating it to find what lessons can be learned and what opportunities are hidden beneath all the sorrow.

In 2018, Stacey Abrams catapulted into the national spotlight when she became the first black woman in history to be a major-party gubernatorial nominee in the United States, as a candidate for governor of Georgia. Though the state has not elected a Democratic governor since 1998, Abrams lost by a narrow and contentious margin of 55,000 votes — the closest race for governor in the state since 1966.

On May 28, Abrams — the trailblazing politician, New York Times bestselling author (Lead From the Outside, 2018), serial entrepreneur, and nonprofit CEO — joined President Sian Leah Beilock in conversation for an exclusive online event held for Barnard College students and alumnae, and presented by Beyond Barnard. The talk, attended by an audience of just over 950, represented the inaugural installment of the Insights: Powered by Barnard series, which promises to bring inspiring discussions with major industry leaders to the Barnard community in a relatable, intimate format.

“The Insights series gives our students and alumnae the opportunity to learn firsthand from top women leaders across industries,” Beilock said. ”I am honored to have Stacey Abrams, a leader advocating for social issues at state and national levels, join us for our inaugural event. I look forward to what future innovative Insights speakers will contribute to our vibrant intellectual community.”

After the gubernatorial race, Abrams founded Fair Fight, an organization that strives to ensure that every voter in the country has a voice in our election system. In addition to Fair Fight, Abrams launched Fair Count in 2019 to ensure accuracy in the 2020 Census and greater participation in civic engagement, and the Southern Economic Advancement Project, a public policy initiative to broaden economic power and build equity in the South. Her 2018 book, Lead From the Outside, provides a practical guide to help women, people of color, the working class, members of the LGBTQ+ community, and millennials realize their ambitions and hone their leadership skills. Her next book, Our Time Is Now, publishes June 9 and offers a blueprint to ending voter suppression. 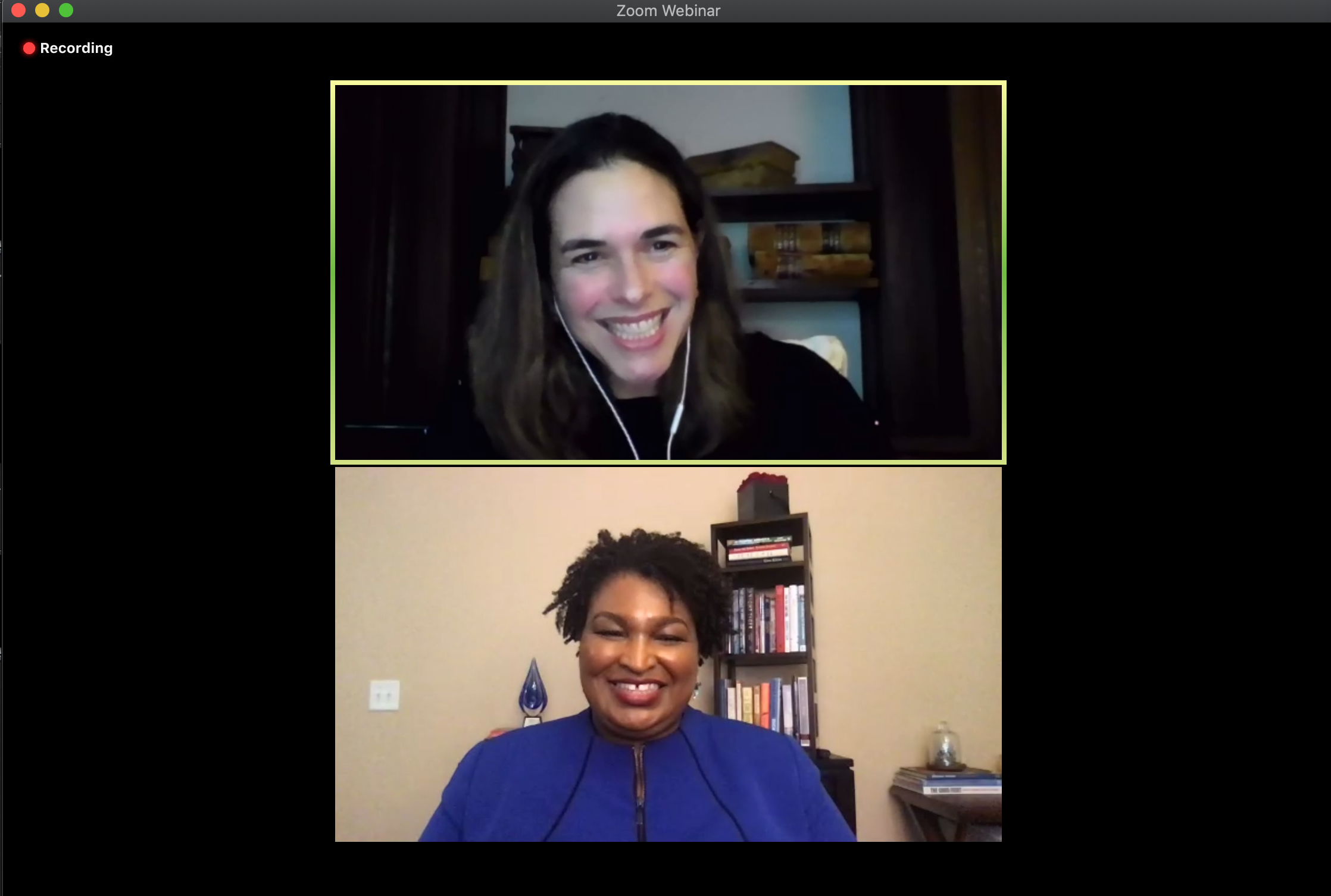 In their conversation, Abrams and Beilock touched on what it takes to be an effective leader during a crisis, offered advice to the Class of 2020, and explained why the census is important to everyone, including Beilock’s 9-year-old daughter.

“Democracy does not take a break because of catastrophe,” Abrams said about ensuring the safety of the upcoming presidential election. “The United States voted during the Civil War; we voted during the 1918 pandemic. We can vote in 2020, but we have to invest in our states, unify the process, and put guardrails in place so these are safe and secure elections.”

On leadership during a crisis:

“It begins by remembering why we got into this work to begin with. I think sometimes in the midst of disaster or catastrophe or pandemic, the leadership instinct says we should try to solve all problems for everyone and use whatever resources we have to do everything. The challenge is you interfere with other groups that are better able to do that work, but you also lose mission-critical insight, and when you do that it’s not just about changing your mind, you’re also destabilizing the people who have to do this work every day while managing the social anxiety of being isolated, managing the challenges of taking care of their families. I think across the board the responsibility is take care of your people first, never lose sight of your mission, and always remember that you’re responsible but that your responsibility does not mean you shouldn’t bring other voices into the conversation.”

On how to ensure fair and safe elections in November:

“I think the most fundamental lesson we can take from 2020 is that no one should have to put their life at risk in order to vote in our democracy. Democracy is nonpartisan, and we have to remember the selections we make have partisanship behind them, but the process itself should work the same no matter who you are, and that’s why it is so critical that the HEROES Act, which has been passed by the House, needs to pass in the Senate. This is a bipartisan demand, which is that we need to fund our election infrastructure so that in all 50 states and the District of Columbia, as well as our territories, elections can happen and every eligible American can cast a vote. That means we have to have mail-in ballots, we have to have in-person early voting, and we have to have in-person voting on Election Day. But the safest and most accessible elections, as we learned in Wisconsin, occur when as many people as possible can mail in their ballots.”

On how Beilock can explain the importance of the census to her daughter:

“The census does two things: It counts who we are, and it allocates power to where we are. By counting every person in the country, we tell ourselves the story of what America is today, and by knowing who we are today, we can compare ourselves to where we’ve been, and we can start to predict what we’re going to be. When people aren’t counted, they’re not included in the story, and when you’re left out of the story, you’re left out of the resources. If you look at the correlation between the COVID-19 infection rate and death rate, it’s almost a direct track to those who are often left out of the census, because that’s how we allocate doctors, it’s how we allocate hospital beds, it’s how we allocate the resources for PPE [personal protective equipment]. It’s also how we pay for school lunches, roads, and bridges, and it’s how businesses decide where they’re going to locate their companies and locate new jobs. If we don’t get counted, we do not count. It’s also how political power is allocated. Every 10 years, we reapportion where the 435 congressional members in the House are located. Depending on which state you’re in, if your state has more people, you get more power, if your state has fewer people, you lose power. You don’t want to lose power when you didn’t lose population. This is like either winning the lottery or throwing your ticket away.”

On how to convince people that their vote matters (asked by Samantha Le ’07):

“If your vote didn’t matter, they wouldn’t be working so hard to stop people from voting. The moment you make [the decision that your vote doesn’t matter], you’re not only deciding it for you, you’re deciding it for someone who either didn’t know they had a choice, or who were blocked from exercising that choice, or who simply doesn’t get a voice in our society. Our children don’t get a vote, yet most of the decisions we make will impact their lives. It matters not only at the top of the ticket but all the way down the ballot to what our children learn, what our roads and bridges look like, what goes into our streams. We have to remember that everything in our society is determined by a representative democracy, and if we aren’t represented, our democracy doesn’t see us.”

On how attending a women’s college impacted her as a leader:

“It was at Spelman that I first ran for office. Dr. Cole [the college’s president] encouraged me to run for student body because she was tired of me complaining to her, and she said if you want to fix it, get some power, do something about it. I ended up becoming the SGA president by my senior year, and that was my first real understanding that there wasn’t one way to be a leader, there wasn’t one way to be effective, and that part of my responsibility as SGA president was to pull people together who had complementary skills.”

On how being a writer impacts her work as a legislator:

“I love the fact that I write romance, and I write tax policy treatises, and I write about social policy, and I can write about leadership. Words are my mechanism for how I share who I am, and the creativity that comes not just with writing romance but taking typically dry conversations and dry issues and converting them into something that can capture the imagination and hold attention for at least 15 pages — that takes work. And so I don’t think of myself as separate people, but I like to cross-pollinate how I write.”

“Don’t let anyone tell you to diminish your sadness. This has been difficult, and we have to give ourselves space to grieve. I had a very public audition for a job in 2018 that I did not get, and it was devastating. But part of what my parents raised me to believe, what I watched my parents do their entire lives, is meet adversity and meet challenges, not by pretending it doesn’t exist, but by acknowledging it, by excavating it to find what lessons can be learned and what opportunities are hidden beneath all the sorrow. Find the spaces where there’s opportunity, things you’re noticing about yourself or how you responded, that might be helpful to someone else. And then understand that tomorrow is coming. It’s going to be harder than it should be, but that means that the benefits are going to be greater than you could have imagined.”

Watch the full conversation between Abrams and Beilock: 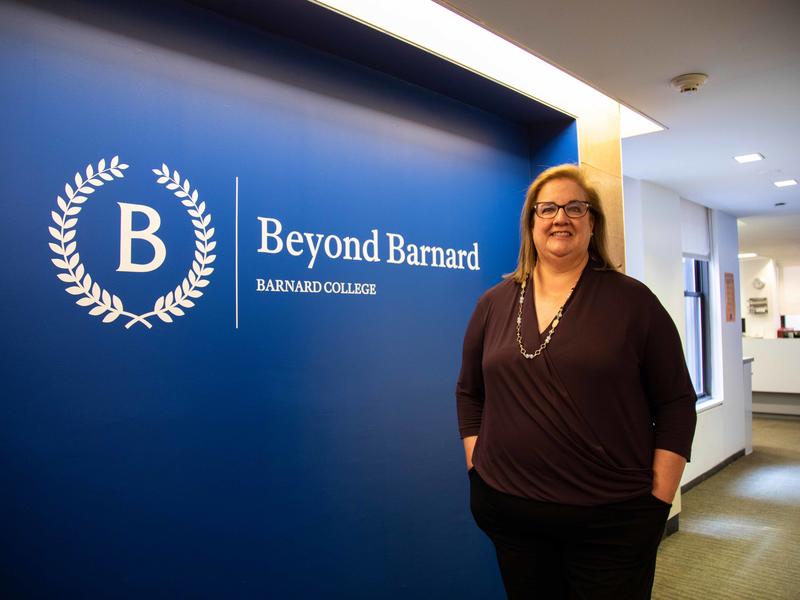 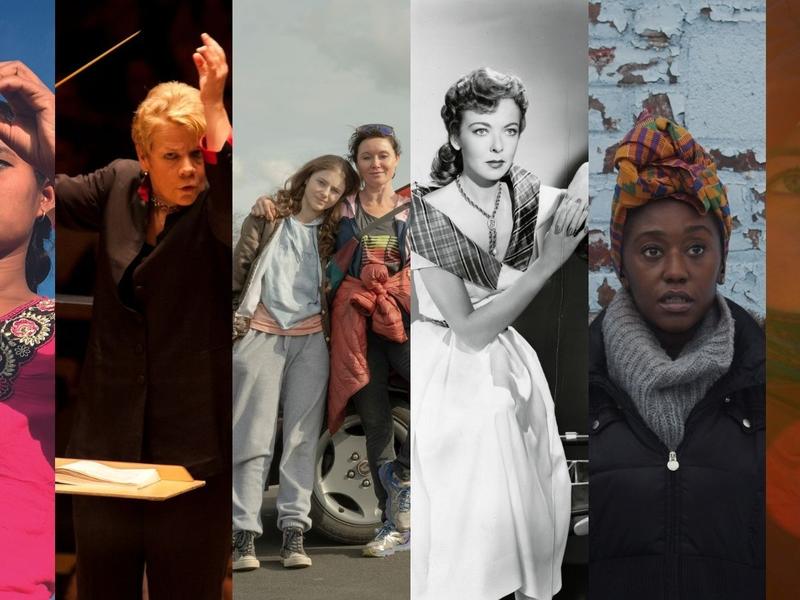 Behind the Scenes of the Athena Film Festival 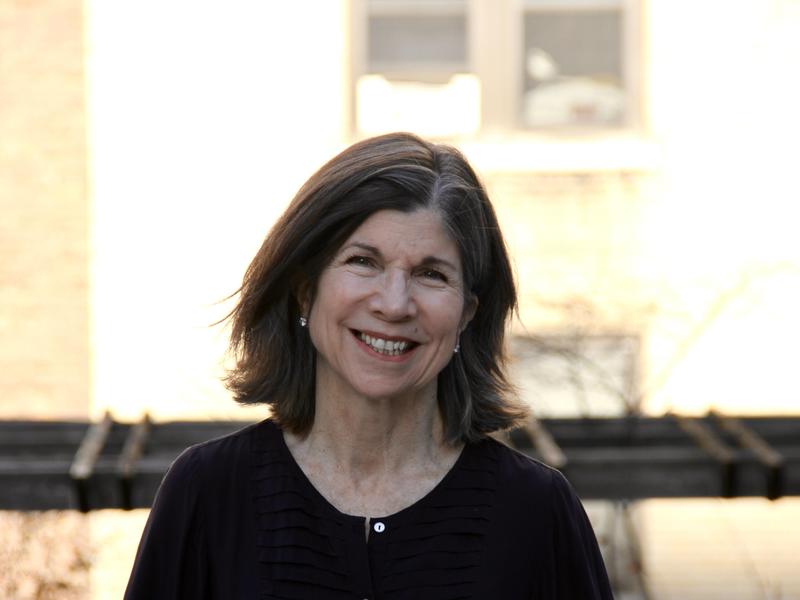