A reflection on the importance of identity, coming out, and the meaning of “lavender culture” — in honor of Pride Month. 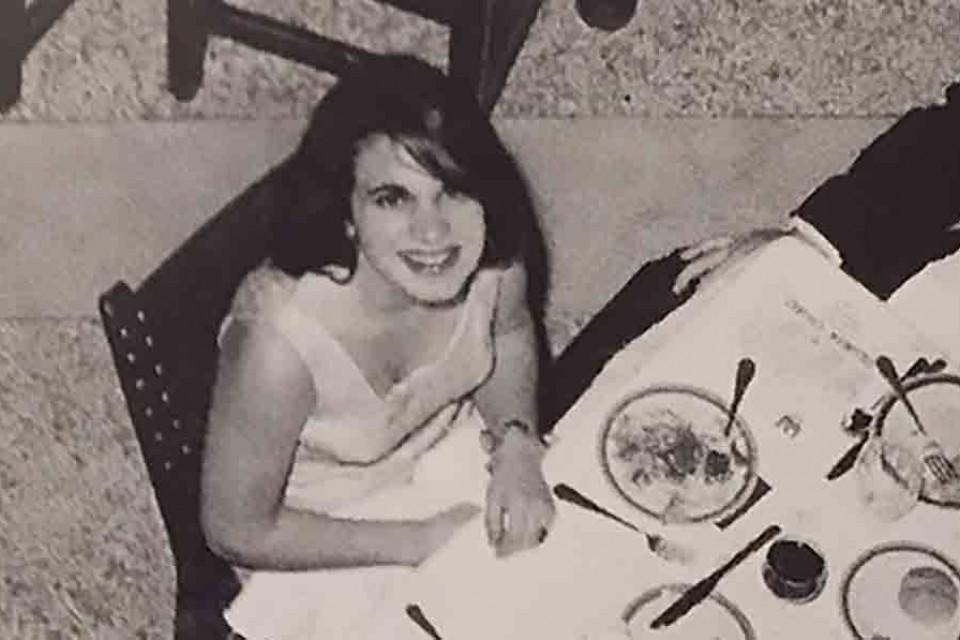 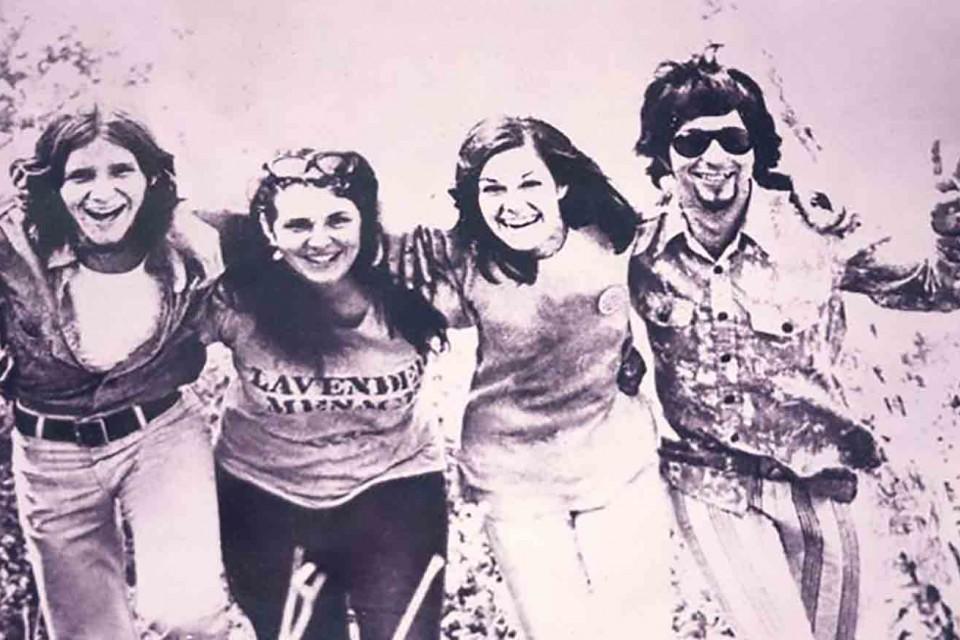 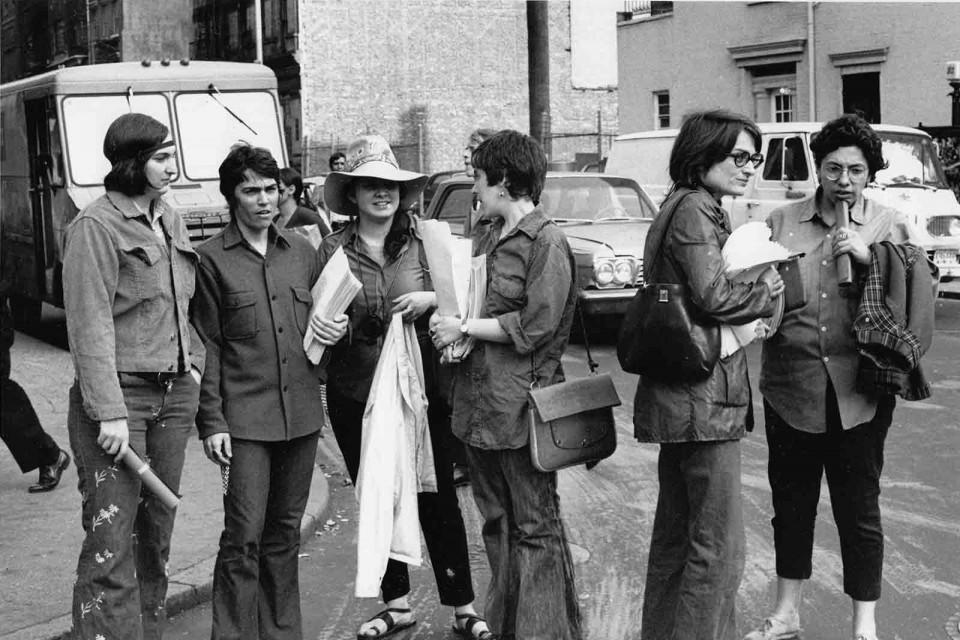 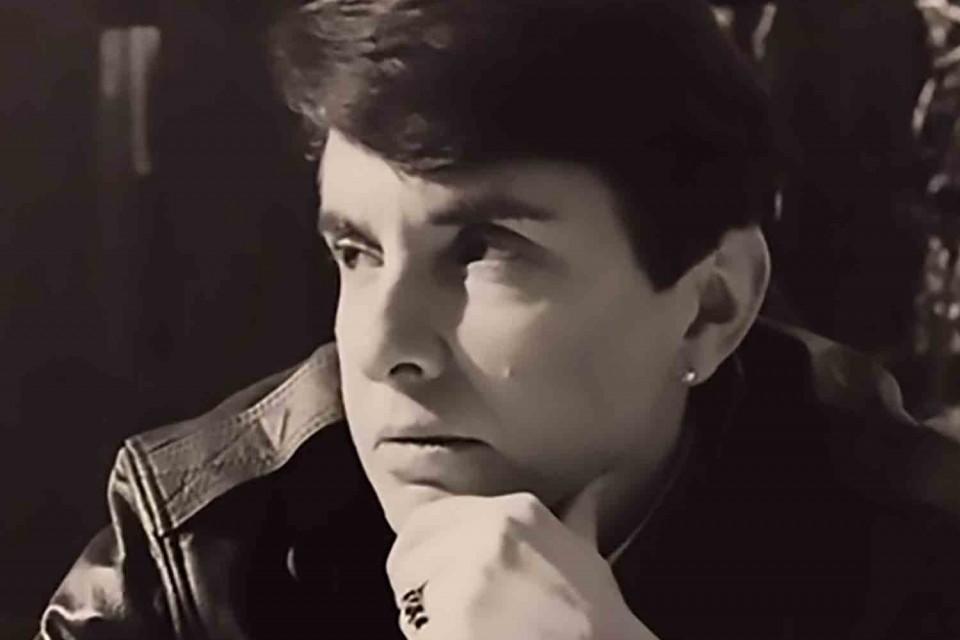 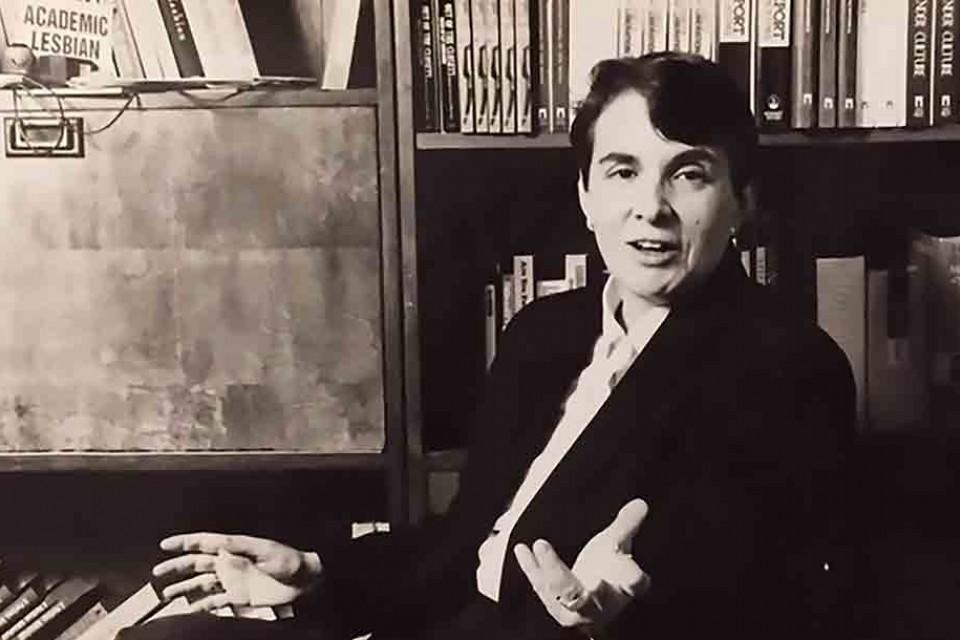 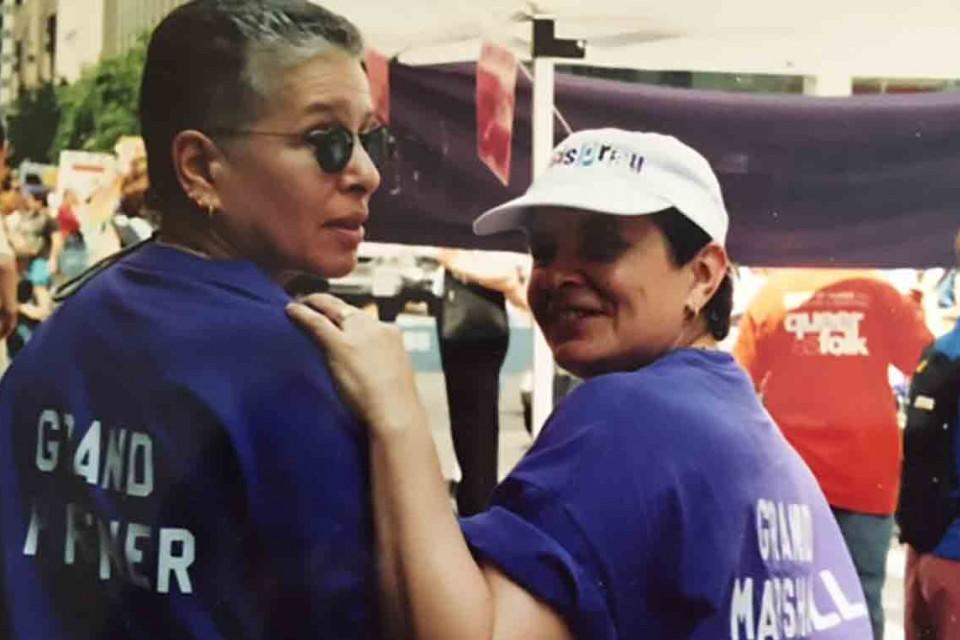 A poster photo taken by the late photographer Lee Mason, the image was used to advertise a Gay-In event in Griffith Park. Jay is second from left, wearing the “Lavender Menace” t-shirt. (1970)

Jay says, “My publisher rejected this author photo as ‘too butch.’” (late 1990s)

Jay (right), as the Grand Marshal of New York City's Heritage of Pride Parade. She received the honor for her role as a "first responder" and professor who taught near Ground Zero. Jay’s spouse, Karen F. Kerner, M.D., is left; her t-shirt reads "Grand Partner.” (2002)

Fifty years ago, when Karla Jayne Berlin ’68 participated in the 1968 student protests on Columbia’s campus, she was also a member of the feminist group Redstockings. The following year, the Stonewall uprising/riots erupted. Berlin joined the Gay Liberation Front and in 1970 became the first woman chair of the organization. That same year, she helped to produce New York City’s first-ever Pride Parade and participated in the Pride Parade of Los Angeles. Toward the end of the decade, Karla Jayne Berlin became professionally known as Karla Jay. 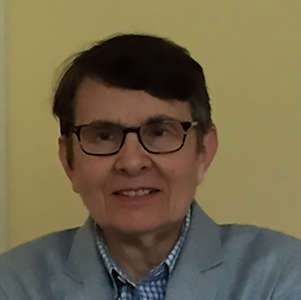 Over the next five decades, Jay helped empower and give voice to the LGBT community. She has written, edited, and translated 10 books, including 1972’s Out of the Closets (the first anthology written for and by LGBT people); 1979’s The Gay Report (a comprehensive survey and documentary of gay and lesbian sexuality); 1996’s Dyke Life (a Lambda Literary Award–winner); and 1999’s memoir Tales of the Lavender Menace. She is a leading lesbian-feminist activist and distinguished professor emerita of English and Women’s & Gender Studies at Pace University.

In honor of Pride Month, Jay reflects on the importance of identity, coming out, and the meaning of “lavender culture.”

In 1969, you started using “Karla Jay” professionally. How hard was it to form your identity and be a “lesbian activist” at that time?

Dropping “Berlin” had to do with the feminist ideal of freeing oneself from patriarchal baggage: I was not my father’s property. I didn’t make the legal change until 1978 because I didn’t want to ask the patriarchal courts for approval either, but eventually I had to in order to avoid confusion.

I think today people better understand what it is to choose one’s own name, thanks to transgender and gender-nonconforming activists. I didn’t “become” Karla Jay—I was her all along.

At that time, there was little acceptance of lesbianism from any group on the left. That’s why when the Gay Liberation Front began to organize in the wake of the Stonewall riots/uprising, I felt at home. I was finally struggling for rights in the midst of a group that was diverse and mostly welcoming beyond my wildest dreams.

People change and grow really quickly in their early twenties. If you had looked into a crystal ball when I was a freshman at Barnard and told me that I was going to be a radical lesbian/feminist who would help lead a revolutionary LGBT organization, sit in and march for civil rights, pose on public posters for pride marches when few dared to be identified as lesbian, and help create the first alternatives to bars, I wouldn’t have believed you—and neither would anyone else who knew me back then. Now, most organizations struggling for civil rights have evolved as well.

What did it mean to you and to the movement when you became the first woman chair of the GLF?

It really was more happenstance than it sounds. We weren’t exactly run by Robert’s Rules of Order (a manual for how to conduct meetings). Names were put into a hat, and mine was pulled out.

I used my position to get part of our very small budget to rent space for an all-women’s dance. It was illegal for same-sex couples to dance together, and the only lesbian bar in NYC, Kooky’s, was owned by a well-known crime family. We had a wonderful, crowded dance, but some connected with the crime family came after us at the end to beat us up. I escaped out a back door.

You co-edited Out of the Closets (with activist and writer Allen Young) in 1972, during a time when the movement did not yet include Q and I. Could you speak to the evolution of the movement to become more inclusive?

We were very inclusive. OTC includes, for instance, “Rapping with a Street Transvestite Revolutionary: An Interview with Marcia Johnson” (who later called herself Marsha P. Johnson), an entire section on the Cuban revolution and LGBT people, as well as articles on effeminism (progressive gay men who embraced feminism and its ideologies), interracial relationships, the struggles of people of color (then called “Third World” people), and the poor. The terminology was different, and “queer” was what other people called us. Some of us worked with radical feminists, the Black Panthers, the Young Lords, or the Venceremos Brigade. Out of GLF came STAR (Street Transvestite Action Revolutionaries) and Salsa Soul Sisters. We invented intersectionality!

This past winter, I took part in the Women’s March, walked with the Parkland students against guns in South Florida, and attended a conference called “Black Women Rise.” What came out of the GLF was the belief that “none of us is free until all of us are free” and safe!

In what ways is the experience of “coming out,” or claiming any sexual identity, different today than it was for previous generations?

Young people today don’t grow up in ignorance and isolation as I did. There are positive images in books, on TV, in film, and in music. However, bullying because of sexual difference has not decreased and may be even worse today. I find it amazing that many elementary and middle school children seem to know their sexual identity quite firmly. At that age, I had no words for who I was, except “tomboy.”

As you celebrate this year the 40th anniversary of your anthology Lavender Culture, can you explain the origin of this term?

GLF members changed more than politics. Lavender—a combination of pink and blue, of male and female—was our color of choice. We also wanted a cultural revolution. No matter what the laws were, we knew if we created and controlled our own newspapers, books, music, film, dance, theater and art, that the authorities could never take those things away from us. In addition, we were interested in culture with a small “c,” that included our contributions to language and queer spaces (bars, clubs, male bath houses, cafes, dances, social groups, LGBT religious institutions, medical practices).

The Stonewall uprising/riots and the GLF emboldened people to be out in their creativity. If you look at the culture you enjoy around you, the right hasn’t succeeded in making us heterosexual, but we sure have made all of you queer! And you’re better off for it.

Fifty years ago, while at Barnard, you took part in the student demonstrations at Columbia University, which was also the year before the Stonewall Riots. What was the campus and national mood on gay rights then?

LGBT rights were not on the radar in 1968. The Student Homophile League, the first of its kind in the country, was founded at Columbia in 1966 by Robert Martin (who called himself Stephen—and sometimes Donnie—Donaldson), and it met in Earl Hall. I went to one meeting in late 1967 or early 1968, and only guys were there. I didn’t feel welcome and did not return.

Barnard itself was extremely lesbophobic. As I recount in my memoir, Tales of the Lavender Menace, one of the first stories I heard during freshman orientation was about two women in Reid Hall whose sexual activity had been spied upon in their private dorm room by a Columbia guy with binoculars across Broadway. They were expelled. I thought the story might have been apocryphal, but a number of years ago, when I spoke at what was then the Barnard lesbian/bi alumnae tea, someone told me she had known the women, and it was a true story.

The message was clear. I hid deep in a closet. There were no role models or mentors for young women like me.

I have to add that Barnard, like many institutions, has evolved to embrace all identities. Now Barnard can boast that cutting-edged LGBTQ scholars and activists, such as Jennifer Finney Boylan (Anna Quindlen Writer-in-Residence), Amber Hollibaugh and Katherine Acey (BCRW Senior Activist Fellows), Che Gossett (BCRW Community Archivist and Student Coordinator), and Reina Gossett (BCRW Activist-in-Residence) are part of Barnard's proud identity. Campus groups that welcome undergraduates in all their sexual diversity abound. I live near the campus and find the talks, readings, and student/faculty interactions inspiring.

For more Pride, read “A Brief History of LGBTQ Life at Barnard.” 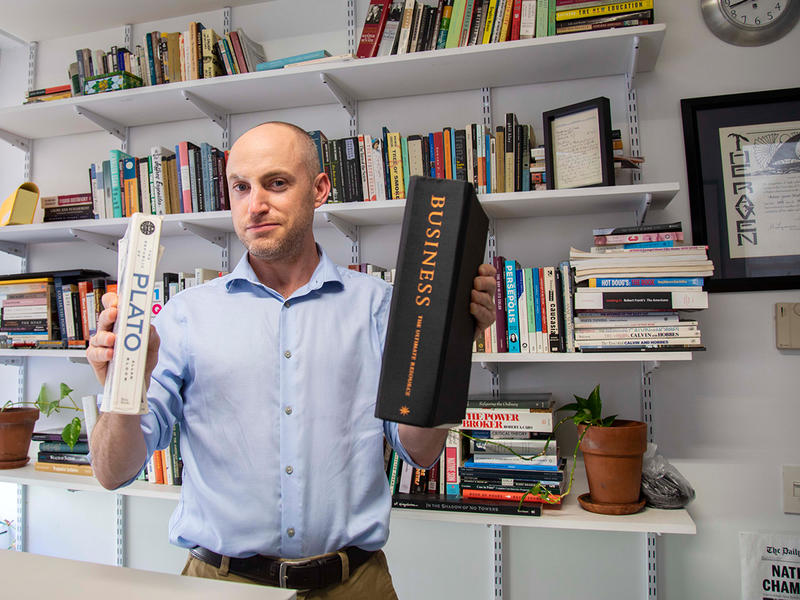 Break This Down: ‘Humanizing Business’ 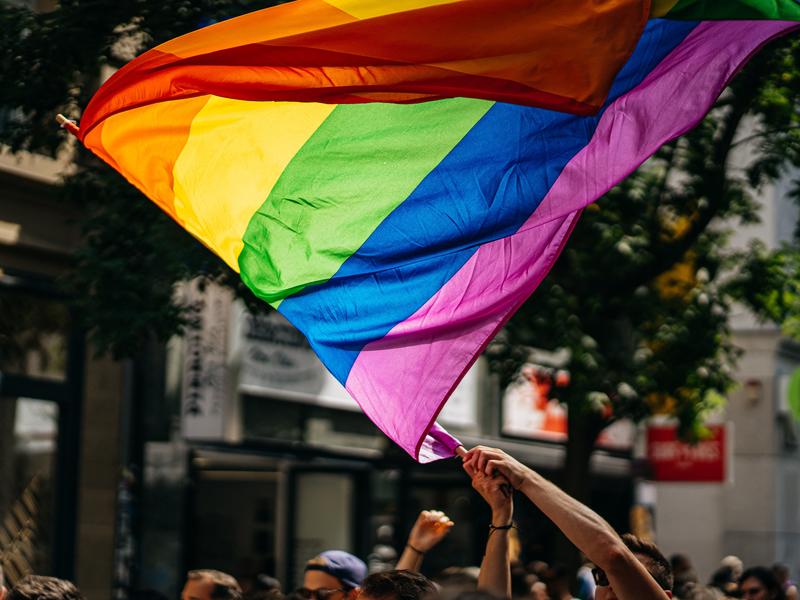 The Power of Pride

College of the Atlantic