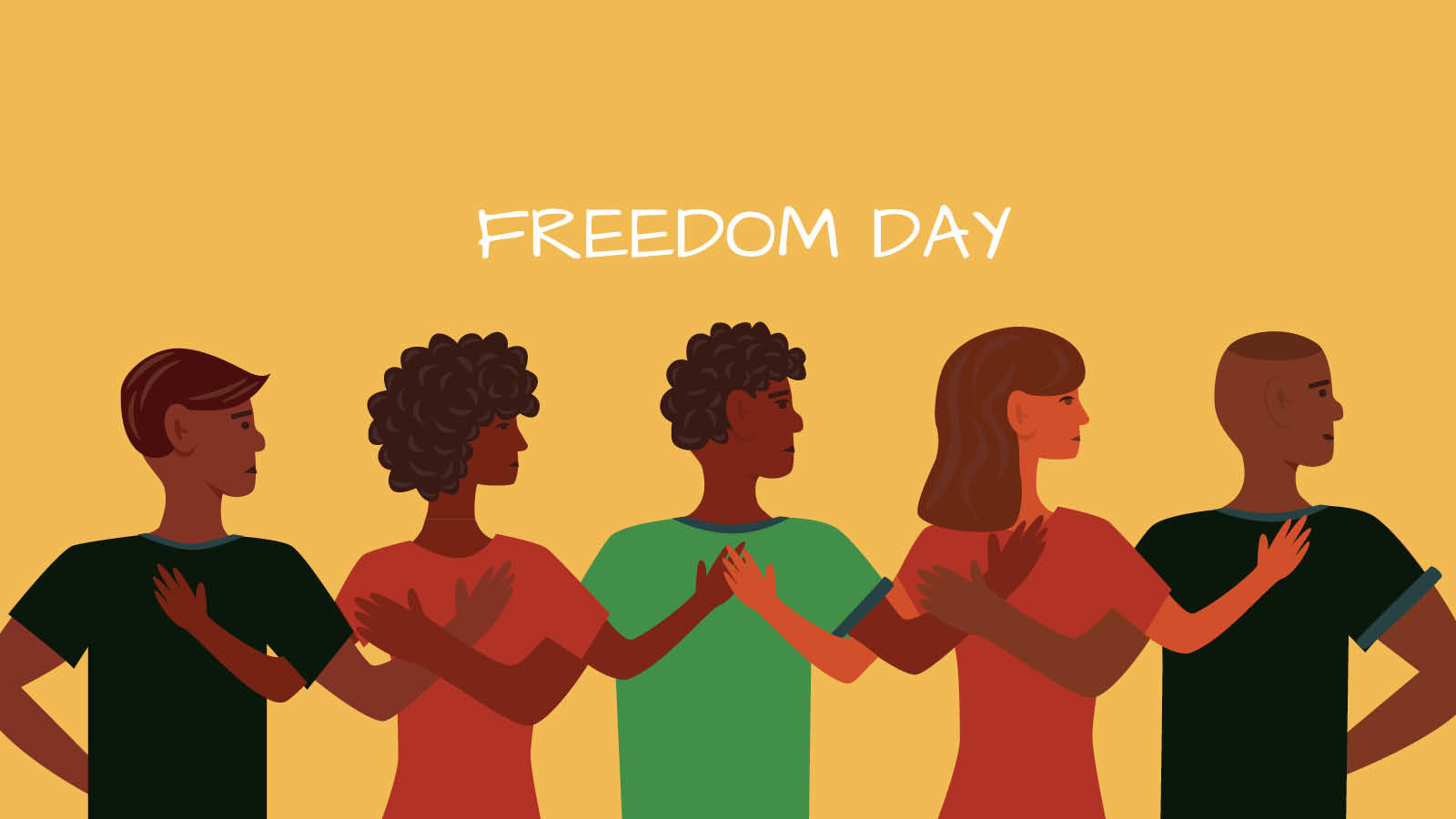 A Native Texan on the Importance of Juneteenth

Cammie Jones, Barnard’s executive director of Community Engagement and Inclusion, commemorates the historic events of June 19, 1865, by sharing what the annual celebration means to her.

Dallas native Cammie Jones was hired this past February as Barnard’s executive director of Community Engagement and Inclusion (CEI) to help the College make good on its commitment to creating an inclusive and welcoming environment for faculty, staff, and students — about half of whom identify as women of color. In this role, Jones facilitates relationships between Barnard, community leaders, and stakeholders across the city and in Harlem to develop the College’s approach to civic and community engagement. Her passion for widening the scope of inclusivity can also be seen in her desire to amplify the historical significance of Juneteenth (June 19), which marks the day in 1865 when Black people who were enslaved in Texas were declared legally free from bondage. Texas made Juneteenth a state holiday in 1980.

Juneteenth, also called “Emancipation Day,” has been celebrated annually by African Americans since 1865 and has recently attracted more attention as the nation revisits its past and present systems around race and power. On June 17, 2021, President Biden signed a bill into law, making Juneteenth a federal holiday. Back in April before this news, Barnard announced it will once again close on Friday, June 18, in observance of the day, “as a reminder of the protracted struggle of this country to abolish slavery as well as the power, resilience, and resistance of Black Americans.” Last year, Celia E. Naylor, professor of history and Africana studies, broke down the historical significance of the day in an interview. Across Broadway, Columbia’s student-faculty-staff-run digital project “Columbia University and Slavery” offers information about Columbia’s and Barnard’s past with slavery.

Off-campus, all over New York City, Juneteenth is being honored in various ways: There’s the weeklong Juneteenth Freedom Fest NYC, a Juneteenth March, and the Juneteenth Festival Celebration of Freedom. And the new, four-part Netflix miniseries High on the Hog: How African American Cuisine Transformed America takes viewers to a Juneteenth barbecue in Texas.

On June 4, Jones — who spent many summers celebrating the holiday in Texas — participated in a video interview with Erinma Onyewuchi ’24, CEI’s social media and marketing assistant, to discuss what Juneteenth personally means to her. Read an excerpt of that conversation below.

Onyewuchi: When did you first learn about Juneteenth?

Jones: I was young. It kind of just was a part of the fabric of my family. I noticed in June, not July 4th, that my family had many traditions. From the food, to music, to movies, to barbecuing. As I got older, I began to inquire with my family about why we celebrated. One thing I remember that my mother was very insistent about was the movies. Movies were key for us to be educated.

In my time, the vintage era of the ’90s as I call it, we watched movies that would come on locally: the different versions of the MLK story, Malcolm X, [The Autobiography of] Miss Jane Pittman, Roots, and Queen. All these different movies my mom would roll out as a source of information for my siblings and I. It was really important for us to understand our history and our family and to connect that with our future.

Onyewuchi: How much have you taken with you as you celebrate as an adult?

Jones: There definitely is a sense of pride, a sense of belonging, and deep meaning and honor for my ancestors. Just to share context, I grew up in a Black community, Oak Cliff, a neighborhood of Dallas, that was predominantly Black. As was typical of desegregation in the country, many all-white neighborhoods transitioned to Black neighborhoods due to white migration to suburbs in North Dallas. I was nurtured by a Black community and a sense of strength, especially around Juneteenth, a day of liberation.

A story that was shared by my paternal grandparents, which I hope to share with the community, is that my grandmother and grandfather were sharecroppers. Sharecropping, essentially, was another form of slavery post-Civil War. Sharecropping was a system where the landlord allowed a tenant to use the land in exchange for a share of the crop. Many Black families rented land from white owners and raised cash crops, such as cotton, tobacco, and rice. Landlords would lease equipment to the renters, and offer seed, fertilizer, food, and other items on credit until the harvest season. My grandparents discussed these difficulties, and we saw the impacts in my family lineage in regards to the industries and jobs we joined. So I’m not far removed from the nation’s history of slavery, and that impacts everything I do today.

It’s also interesting to see the expansion and knowledge of this holiday. It was sacred to us in Texas. Though I’m excited, with any movement when it becomes commercialized, I am concerned about the true meaning of it being lost. This holiday does not wipe away the issues and climate in our country right now in regards to systemic racism. So yes, acknowledge the holiday, but also do the work to change the narrative to create healthy communities that are safe and that are not in a cycle of survival but thriving.

Onyewuchi: How do you hope to see Juneteenth celebrated within Barnard?

Jones: It’s really interesting being on the East Coast, since it hasn’t been acknowledged as much here until recently. I would say, go into your communities, whether that be virtual or in-person. For Barnard, I would suggest our Juneteenth resource page that outlines different modalities in which to engage with this holiday. We have a reading list, a music playlist, and educational resources we hope you share with your family and friends.

The celebration does not stop on Juneteenth. Black history is American history. It needs to be discussed, we need dialogue about this. What has happened in the past of this country is still present in different forms, and I ask people to think about how they can support the Black community and not just post a black square. Are you supporting businesses or joining protests? An essential question to ask is: Where can you join a space, not just take space, but join and provide resources, and above all else have a willing heart to hear? So those are some ways one can celebrate, and I hope to see that in our community as well.

To learn more about Juneteenth, follow the Office of Community Engagement and Inclusion on Instagram @ceibarnard, and see the resources below:

A reading list, curated by the Barnard Library and Academic Information Services (BLAIS): 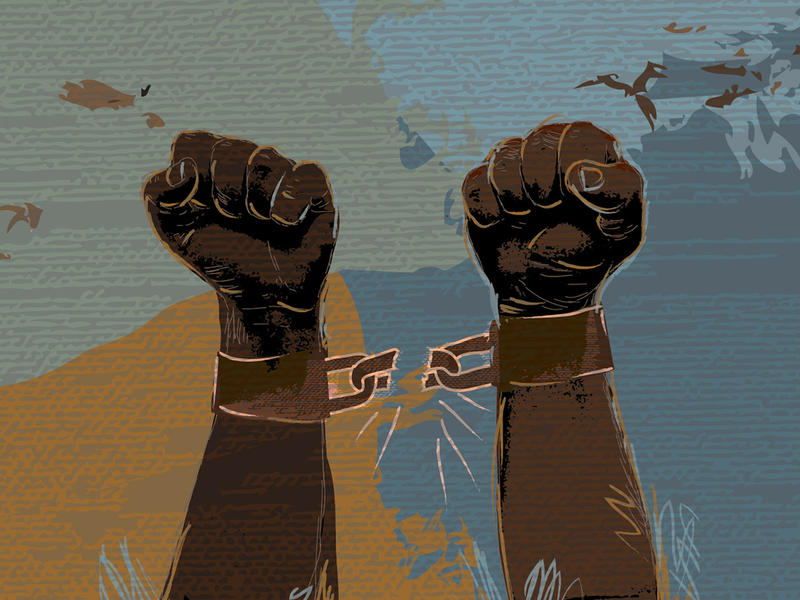 Break This Down: Juneteenth