Twenty years after Interpreter of Maladies, the Pulitzer Prize-winning author discusses the journey to publishing her latest book — in Italian.

When Jhumpa Lahiri ’89 won the Pulitzer Prize in 2000 for her debut short story collection, Interpreter of Maladies, she was lauded for her depictions of the complex lives of Indians, Indian Americans, and immigrants.

In the 20 years following, Lahiri — the director of the creative writing program at Princeton University — wrote two more novels (The Namesake, 2003; The Lowland, 2013) and another story collection (Unaccustomed Earth, 2013). Then something unexpected happened: She began to write in Italian, a language she picked up while working on a Ph.D. in Renaissance studies at Boston University.

“It was very mysterious,” Lahiri said of the decision, at The Lowell Hotel in early February during a fireside chat. Her book In Other Words (2019) explores the experience. “But also very clear at the same time. It was clear that I was drawn to this mysterious thing, which was the study of the Italian language. And so I kept doing it, and it started to slowly take over my life.” 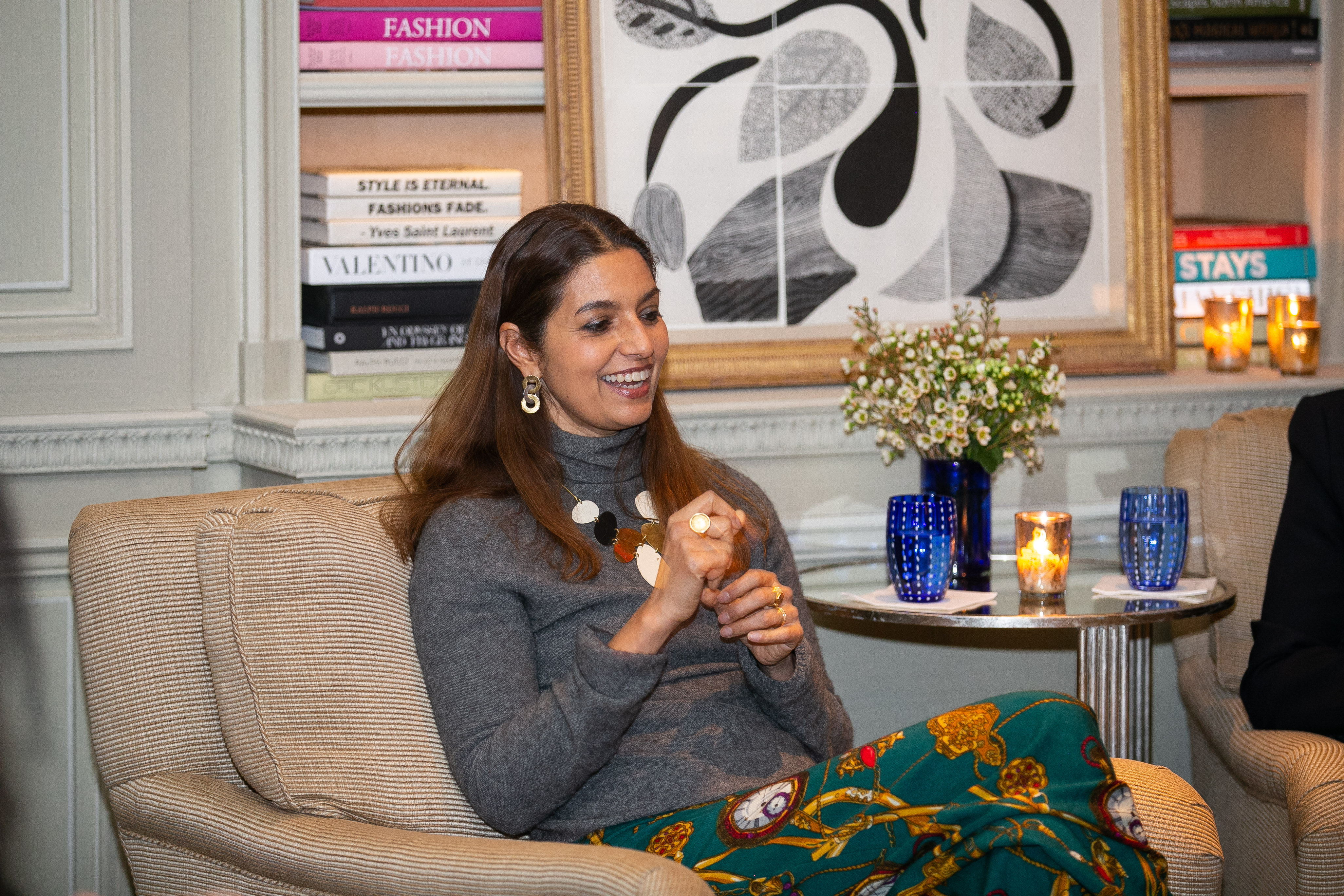 The intimate event for Barnard alumnae and English faculty members — hosted by the hotel’s owner, Dina De Luca Chartouni ’82, P’15 (top photo, right) — took place in a cozy lounge decorated with candles, books, and a surprising pink neon heart. President Sian Leah Beilock (top photo, left) led the conversation with Lahiri, discussing Barnard, writing, and their shared love of Rome. Beilock joked that she “stalked [Jhumpa] a little bit” after learning they were staying around the corner from each other in the Italian city.

Lahiri’s most recent novel, Dove mi trovo, was published in Italy in 2018, and in some ways it seemed inevitable that she would end up writing in a language besides English. Her first language was Bengali, and she studied both Russian and Latin at Barnard before finding her way to Italian.

“I’ve always been interested in writers who have gone out of their prescribed linguistic identity,” Lahiri said, citing the Irish writer Samuel Beckett, who wrote in both English and French. “I remember being a [first-year at Barnard] and reading [him] for the first time and really having no idea who he was or what he did but just being really impressed by the fact that he too felt the need to step out of his own world and his own language.”

“I was exploring, and a college like Barnard is so wonderful for that.”

Barnard gave Lahiri the freedom to figure out what she wanted to do with her polyglot interests. She loved writing in high school but had channeled that love into journalism rather than fiction. Before ultimately settling on an English major, she thought about pursuing philosophy, South Asian studies, or classics.

“I was exploring, and a college like Barnard is so wonderful for that,” Lahiri said. “There are all of these other worlds right around the corner or on the other floor of the building.”

It’s that desire for intellectual exploration that kept Lahiri focused on Italian, even though the path hasn’t been easy. Beyond the difficulties of learning to write in a new language — “and I really had to learn how to write all over again” — her English-speaking fans haven’t all been supportive. “Sometimes people come up to me and say, ‘I really don’t like what you’re doing. I really wish you would stop. I really just want to read you in English,’” Lahiri said with a wry smile.

She tries not to let those kinds of criticisms get to her, though. “I move on, and I get up the next day and do what I have to do because writing is a calling,” Lahiri said. “Those [critical] voices don’t reach the place where you are when you’re creating something.”

Another question Lahiri said she is often asked about speaking different languages: What language does she dream in? Lahiri said that the language depends on the content of the dream itself — dreams about her parents are usually in Bengali, for example, whereas dreams set in Italy are in Italian. That said, the writer joked, “A lot of my dreams are blissfully silent.”