After half a century working in STEM, Susan J. Feingold ’61 launched a career as a full-time composer 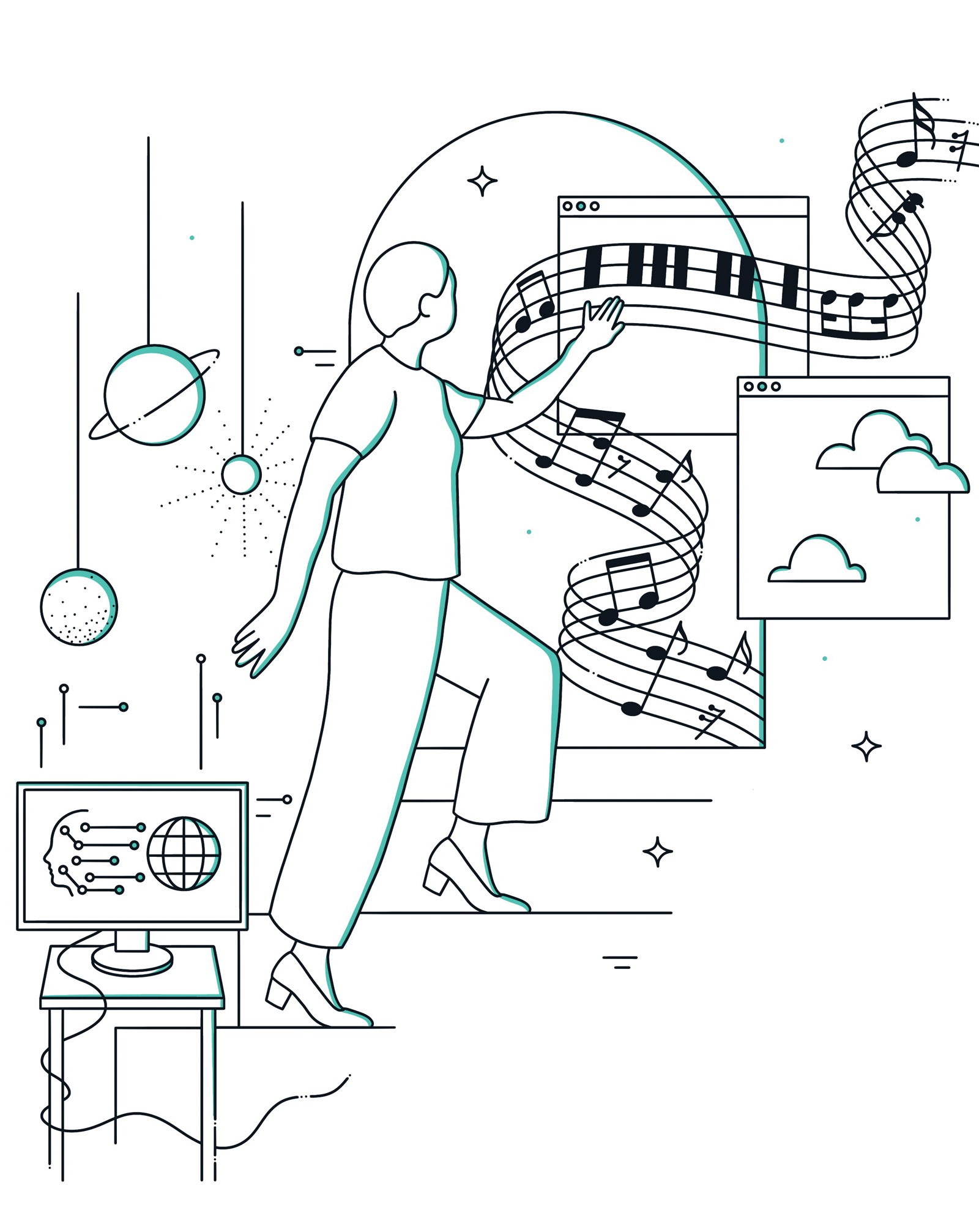 Music has always been a running theme for Susan J. Feingold ’61: piano lessons as a child, oboe in the high school band, her father’s 78-rpm record collection of opera arias. But it would take 50 years from when she minored in music at Barnard until she became a full-time composer, setting the practice aside after feeling discouraged by her college composition course.

“Writing music was hard for me in the beginning,” recalls Feingold, who now composes operas and song cycles, which can be heard on her SoundCloud under the username suefein132. “I hadn’t been a child prodigy and written music all my life.”

Now, her second act as a composer offers a lesson in resilience and creative curiosity. “It’s never too late to take a step in a new direction,” Feingold says. “That is my motto.”

Having majored in math with a minor in physics, followed by a master’s in physics from Columbia, Feingold spent her career at the Technion-Israel Institute of Technology in Haifa. “Physics was my great love,” Feingold says. “And it will always be my great love, especially cosmology — what happens in the universe.” At Haifa, she worked as a scientific advisor in the Technion Computer Center, eventually earning a doctorate in science in the area of artificial intelligence in 1976 when the field was still in its nascent stage.

Despite following a technical career, Feingold remained involved in music as a singer in a choir in Israel, and again when she moved back to the New York area in 2003 after the death of her husband. Returning to composing, though, was serendipity.

“It turned out, a friend of a friend who wrote poems wanted one of them set [to music]. And I said to myself, ‘Well, I used to write music. I’ll try to set his poem,’” Feingold says. At first, “it was like pulling teeth. But I persisted. When I decide to do something, I stick to it until it’s done.”

The song she wrote was, according to Feingold, very hard to sing. But when the conductor of her choir put out a call for submissions of original choral compositions, Feingold was inspired to write another piece, prompting the choir conductor to recommend that she find a composition teacher. She did, and her love for composing expanded from there.

Since 2014, Feingold has turned her attention to composing full-time. She wrote an opera from 2016 to 2019, and she’s also written two song cycles in the past couple of years — one about the legendary ballet dancer and choreographer Vaslav Nijinsky and one about the environment.

The environment is an especially important theme for Feingold, who describes herself as an environmentalist. She’s written songs about the fires in Brazil’s Amazon rainforest and about the sea level rising, as well as part of a Requiem Mass for the climate. Feingold says science and music are parallel pursuits in her life, but the influence of a life spent in the sciences remains. Her musician page on Facebook is called “Music and Science,” and she uses it to share science articles that interest her, alongside her music.

Composing has been a journey of trial and error for Feingold, but she hasn’t let the missteps get to her. She talks about learning to send recordings of a singer to the accompanist to play along to rather than the reverse and realizing that hiring a big orchestra to perform her compositions is a significant expense. “So I will never do that again,” she says with a laugh.

This learning on the job also includes the time she waited six months to get setting permission from a poet whose words she wanted to use for one of her pieces and when another musician pointed out to her that she could try writing for oboe if she found writing for piano difficult — her “learning mistakes.”

“You’ll always find that there’s a smarter kid on the block, but you shouldn’t care,” Feingold says. “If you really focus on what you want to do and you stick to it, eventually it will come out for you.”

Even the pandemic hasn’t been discouraging for Feingold — in fact, it’s had its upsides. “Of course, I miss going out like everybody else, but I’ve been sitting at my computer writing songs,” Feingold says. “So it’s not been as bad for me as [it might be] for someone who has nothing in particular that they want to do.” She’s even had one of her songs performed in a virtual concert, and the online format allowed her to be featured alongside an artist with a big following, giving her exposure to a larger audience. “Also, I mean, how many movies can you watch?” she jokes.

These days, Feingold is working on a new opera, an autobiographical work called Lifetimes. She has the libretto written, along with the lyrics to three songs. She anticipates working on it for the next couple years. “I’ll see where I’m up to by then, and then maybe I’ll do something else. But it will always be music,” Feingold says.

That sentiment aligns with her advice to aspiring composers: “If you have a passion, you should focus on it, because that’s what makes life worth living.”