Peek in on five workplaces graced with multiple generations of Barnard grads, all sharing history, resources, and, of course, a fridge

What’s it like to go to work every day, secure in the knowledge that your Barnard-educated colleagues have your back? We talked to five sets of Barnard women who work together — some of whom knew of their alumnae connection before starting their jobs, others who got a delightful surprise (“Whoa! Shared history!”) after months of being colleagues. We asked: Does their shared past have an impact on their collaborations? How do their Barnard ties manifest in their work? Are there Barnard-specific characteristics that help them in their jobs? Does their working together affect their connection to the College?

Here are their stories.

The Builders of the Barack Obama Presidential Center

“We’re making something from scratch,” says Emily Frieda Shaw ’06. “A cultural institution like this doesn’t come into existence anew very often, and literally being on the ground floor — we are literally on the ground floor of this building in Chicago right now! — is really exciting.” Shaw is a librarian and archivist whose primary responsibility is working with the National Archives to digitize presidential records. M. Alison Eisendrath ’88 is director of collections for the foundation’s museum team. “Alison and I work on different aspects of collection management, so our work intersects,” she explains. Kirstin Jones ’15, a finance analyst, doesn’t work directly with the pair. But that hasn’t stopped the trio from connecting. “On my first day, in a new staff introduction email, I said I was a Barnard alum, and they reached out to me,” Jones recalls.

All three believe that Barnard provided great prep for the creation of a brand-new center. Eisendrath says, “Seeing women in positions of power all the way to the top — there was this sense of limitlessness.” Also, Shaw posits (and Eisendrath and Jones agree), “The values of integrity and scholarship — that’s Barnard. And that’s infusing what we’re attempting to build here.”

Their common Barnard experience is a help. “There’s an immediate trust among us, a baseline,” Shaw says. “We have different life experiences and Barnard experiences, but there’s a thread of commonality and affinity to build from.” Jones notes, “The writer Anna Quindlen says, ‘When you go to Barnard, you major in unafraid.’ I do think when I was at Barnard, I learned that.” And Eisendrath elaborates, “As an English major at Barnard, I was encouraged to dig into complex narratives. And that’s what history is: contested narratives and multiple voices coming together to tell broader stories. Storytelling is a common thread here; it ties back to President Obama’s community-organizing strategy of sharing stories. And flexing those analytical muscles is critical. Barnard taught us that.”

The Restaurant and Hotel Developers

Fran Mayo ’15 and her sister Ginger ’19 work at Rebees, a Dallas company that builds huge, mixed-use spaces around the country. “I absolutely love working with Fran,” Ginger says.

The Mayos grew up overseas; both knew they wanted to go to college in a big American city. “NYC, with all its diversity, felt like a good fit,” Fran says. Though the city was the initial draw, Fran found that attending a women’s college was an unexpected blessing. “We work in real estate in Texas, where it’s a heavily male-dominated field,” she notes. “But at our company, three of the five partners are women, and the founders have made it a point to nurture the talents of young women just starting out.”

The communication skills they learned, both sisters agree, have proved invaluable in startup culture. “I came out of the gate prepared to do high-quality work,” Ginger says. Fran concurs: “The Barnard Writing and Barnard Speaking Fellows programs, which taught me to write clearly and speak with intentionality, have helped me punch above my weight in everything I do.” Both sisters majored in urban studies, something that dovetails nicely with their work. (A third sister, Evelyn ’17, also moved to Texas; she now works for Legal Aid.) Rebees — where Fran is director of operations and Ginger manages marketing — builds storefronts and restaurants that strive to incorporate public space into their designs. “We have to be really flexible, able to talk to people who might not be on the same wavelength, good at convincing people to our way of thinking,” Fran says. “Barnard taught us that.”

She recently recruited another Barnard grad to join Rebees’ parent company and jokes, “I think all the Barnard graduates in Texas except Evelyn work here.”

When Wendy Greenbaum ’75 learns Barnard Magazine is eager to chat with her and her Warburg Realty co-workers Maria Daou ’93 and Tania Isacoff Friedland ’10 about their Barnard history, she exclaims, “Oh, we have a 1952 graduate working here, too!” She quickly begins pitching a story about her colleague Evie Muller — currently taking some time off for health reasons — rather than promoting herself, something that seems very Barnard indeed.

Muller welcomed Greenbaum to Warburg; Greenbaum went on to embrace Daou; Daou nurtured Isacoff Friedland. Each of them notes that the high-end NYC real estate business can be cutthroat, but they’re a supportive bunch. Case in point: “I recently sold a beautiful Park Avenue coop,” Daou says, “and Wendy had a listing in the building, and we discussed everything from the pricing to the clients. Warburg’s brokers are supportive in general, but the Barnard thing is an unspoken instant trust thing, an underlying thing, a sisterhood thing. I’d known Wendy for years before finding out she went to Barnard, but when I found out, it added a level of trust and camaraderie.” Isacoff Friedland, an art history major who came to Warburg after gigs at the Museum of Modern Art and Sotheby’s, sees her Barnard education as great prep for her current job. “I’m selling a luxury item,” she says, “which is exactly what I would have done as an art advisor.” But more essentially, she notes, “Barnard prepares women to think independently and have strong opinions.” And working with fellow grads, she says, is a gift. “Anywhere in life where you have common ground with someone, there’s an opportunity to bond a little bit. It’s nice to have that added layer of connection.”

“Barnard opened my eyes to different ways to analyze the world and movement and human nature, which is a very big part of what I do now,” says Donna Zakowska ’78, whose costume designs for Amazon’s The Marvelous Mrs. Maisel won her an Emmy award this past September. “My education gave me a sense of global identity and how things connect,” she says. Working on The Marvelous Mrs. Maisel, she met director Jamie Babbit ’93. (In the endless daisy chain of Barnard connections, Babbit had worked with actress Lauren Graham ’88, on Gilmore Girls.) “Jamie and I totally hit it off,” Zakowska says. “We didn’t at first realize we’d both gone to Barnard, but we were immediately very friendly. Then one day Jamie said to me, ‘Where did you go to school?’ and I said, ‘Barnard,’ and she said, ‘So did I!’

“It’s always a great feeling when you’re working with an alumna,” she continues, “because you know you’ve walked in the same buildings and shared the same experiences. We both had a respect for the feminist philosophy you’re exposed to in that school.”

Says Babbit, “I was so happy the first day Donna and I were shooting, because I like to look at the extras and pick who looks the best and put them in the foreground.” To Babbit’s delight, Zakowska was on set, unlike most costume designers. Zakowska looked through the extras with Babbit, pointing out some of the most striking and effective outfits. “Costume is huge — it’s color and mood,” Babbit says. “Sometimes I want extras in the frame for the way they offset Midge,” the show’s main character. Babbit pauses. “I think my specificity — knowing that the devil’s in the details — comes from all the nitpicking I did intellectually at Barnard.” She and Zakowska both laugh. And both note the sense of social justice they developed at Barnard: “We were thinking about how we could pull background [extras] who were African American and Latino and Asian into the scenes,” Babbit says, “because it’s not always important to be 100% historically accurate.” In fact, the 1950s New York in which Mrs. Maisel is set was not nearly as racially integrated then as it is now. Zakowska picks up that thread: “Maybe you’re cheating the truth a little at that moment. But it’s 2019, and you have the responsibility of it being 2019. You try to do the best you can of enlarging the diversity picture.” Zakowska concludes, “Barnard is about being awoken, from a feminist academic and artistic point of view. That’s something we share. We both had that experience.”

The Cancer Clinician and the Med Student

Medical student Elsie Ennin ’15 raves about Khakoo. “She’s one of the top researchers in her field — she’s everywhere at MSK, with a million projects. But she’ll still have time for you, her patients, her family,” she says. “Watching her reminded me of the excitement of my Barnard days, of just going for stuff and not letting barriers stop you. She works with such grace.”

Pediatric oncology, obviously, is an emotionally tough field. “It was hard when I started,” Ennin acknowledges. “I had to go home knowing I might not see a certain patient again. Dr. Khakoo taught me that as long as you’ve done your absolute best, that should give you some solace, and channeling your frustration and sorrow into research is so helpful.” Khakoo also taught her to take charge of a room. “There were so many little moments in which she taught me how not to think, ‘This person is more talented than me.’ She always does this power pose before an important meeting. Your hands are on your waist, and your legs a little bit apart, and you take deep breaths. I still do that.” Ennin is eager to grab the Barnard mentoring baton. “Applying for medical school was a daunting, stressful time,” she says. “So I’m passing on my MCAT books and taking on a couple of students to give advice to. I received that mentorship when I was on my journey, and I absolutely want to pass it along.”

Marjorie Ingall is the author of Mamaleh Knows Best and a columnist for Tablet. 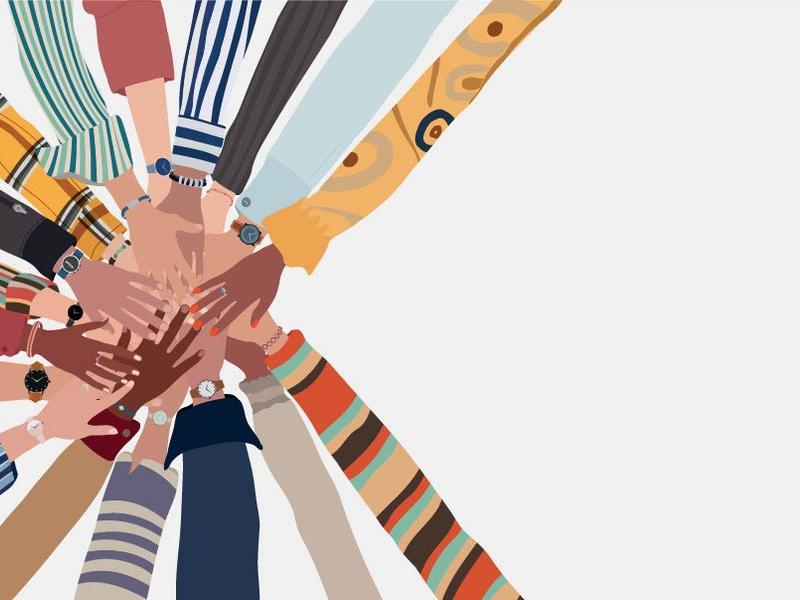 Class Agents at the Grass Roots

Meet some of the alumnae fundraising volunteers who are working to provide resources, opportunities, and a more equitable college experience for current Barnard students.