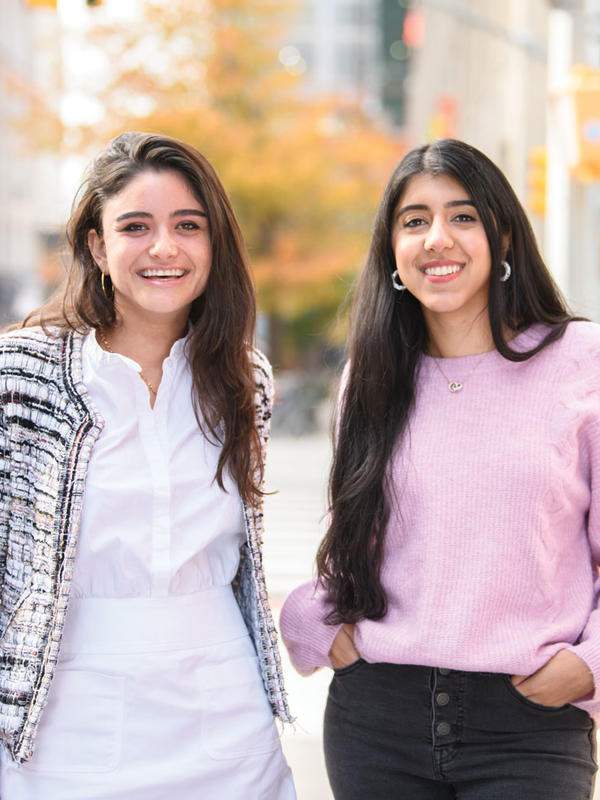 After completing an internship on Wall Street the summer before her senior year at Barnard, Anam Lakhani ’19 had, she says, “a few extra bucks for the first time in my life.” Wishing to invest that money in the stock market, she downloaded some investment apps but was frustrated by the difficulty she encountered when using them and by the lack of friends with whom she could discuss investing. So it was fortuitous when she and Eve Halimi ’19 found themselves paired together in the Athena Center’s senior seminar entrepreneurship class and tasked with developing a social action project.

They discovered that while they were both economics majors who had worked in different sectors of the financial industry, they were preparing to enter the full-time workforce with little idea about how to invest their money. “What was even more concerning was that none of our classmates or friends, especially our female friends, were talking about investing and didn’t really know how to,” says Lakhani.

They became determined to create a new platform to make it easier for the next generation to invest. That idea became Alinea, an investing app designed for members of Gen Z, which they launched in November 2020 and lead as co-CEOs. The company’s name comes from the French word alinéa, which Paris native Halimi defines as “moving to the next line … which essentially is a new chapter. That’s what we’re creating: a new chapter in investing.” In the past year, their company was featured in Forbes and Yahoo! Finance.

Since investing can be intimidating, especially with the abundance of information available, Alinea is designed to make investing simple, personal, and transparent — and at the tip of your fingers. To allay the anxiety of young investors, the app offers a calm and familiar experience inspired by products the younger generation enjoys on a daily basis. “We’ve used the analogy that we’re like Spotify for investing,” says Lakhani.

“We have a feature that no one else has, which is creating your own playlist of investments, which we call a stack,” she says. “So I could have my ‘Eve stack,’ where I’m bundling up all my favorite companies and investing as little as $1 in all of them.” Alinea focuses on diversification, with Halimi remarking that over 90% of day traders lose money on single stock picks.

Among the Alinea-created stacks, the most popular categories are women-led, blockchain, clean energy, and electric vehicles. The founders say impact investing matters to their generation because young people want to invest in issues they care about. To help Gen Z incorporate environmental, social, and governance (ESG) factors into their strategy, the app provides an ESG score for each stack.

What was even more concerning was that none of our classmates or friends, especially our female friends, were talking about investing and didn’t really know how to.

Alinea uses an Instagram Story-style format so that users can learn about diverse topics related to investing. “Through [the Instagram] Stories format, which is familiar to our generation, we are bringing education to our peers,” says Halimi. At the same time, they are making investing a more social experience. Lakhani notes that “a huge part of [what we noticed] when we were getting started was the lack of community. We want users to be able to see what their friends are doing so that they can share knowledge and talk about investments.”

There is no fee to invest through the app. “Everything we’ve built so far has been for the customer first, and we haven’t prioritized monetization,” says Halimi. “We are figuring out monetization right now, have a lot on the product road map that’s very exciting, and are looking to raise another round of funding pretty soon.”

Halimi and Lakhani raised $2.3 million in their first round, which was challenging as young women in the financial tech space. “I think 95% of the investors we spoke to were older white men, and it definitely made it harder for them to understand the problem and to take us seriously,” says Halimi. “We were seeing male-founded startups doing very similar things or in earlier stages than [we were] and raising money much faster and in bigger amounts.” But their tenacity and hard work have paid off: They applied and landed a spot at Y Combinator — a startup fund and program that helps founders launch, build, and scale their startup.

When the pair completed the three-month Y Combinator program, they had launched an app, received a license from the SEC, and secured investors, including the Harvard Management Company. They have added three Columbia University grads to their team as chief technology officer and lead engineers and are growing the community of users through student ambassadors at campuses throughout the country. And they have hired a team of student interns who are involved with product management.

While their initial target audience was young women, they are now committed to empowering all of Gen Z. In a survey Alinea recently did at colleges, they learned that nearly 85% of students are not investing their money. “This is often because of a lack of education, knowledge, and confidence,” says Lakhani. “This has detrimental effects because when you don’t start investing early, you have to play catch-up later on.”

If a college graduate starts investing $1,000 each year in the S&P 500, beginning with their first paycheck, she will earn $1.28 million over the next 50 years (assuming an interest rate of 10%). “You’re losing the potential of [earning] over a million dollars in your lifetime by not investing, and that’s what is hurting a lot of women out there, and that’s what is so important to us to fix,” says Halimi.

Providing young people with the tools to learn and enjoy investing is a crucial step in the co-CEOs’ larger mission to support women more holistically. “Having financial freedom, security, and wellness is as important as good health,” says Halimi.