Gabriela Jatene ’22 (above) has always relished watching and evaluating movies. Using an app called Letterboxd, she has logged and critiqued every film she has ever watched. By late August, she had viewed 1,179 films in her young life. As the Athena Film Festival's (AFF) Post-Baccalaureate Fellow, Jatene has added exponentially to that total. Festival programmers, including Jatene, screen the submissions and evaluate them, helping to determine the films the festival will include in its program.

Since July, Jatene has been working with two programming fellows. The Athena Programming Fellowship, awarded to Tishon Pugh and Madison Egan, is a new opportunity at AFF that launched this year and was inspired by the Outfest Fusion Programming Fellows program. These fellowships represent an exciting extension of Athena’s commitment to advancing women’s leadership both on screen and also, now, in the process of programming and curation.

“Athena’s Programming Fellowship represents an exciting new initiative aimed at training women for careers in film,” said Victoria Lesourd, Chief of Staff at the Athena Center for Leadership, AFF’s home base. “Through this fellowship, Tishon and Madison are gaining meaningful experience in festival programming and curation, mentorship from our amazing programmer Alia Ayman, an opportunity to connect with a network of women in film, and a stipend to compensate them for the time and energy they are investing in putting together our Shorts Programming.” 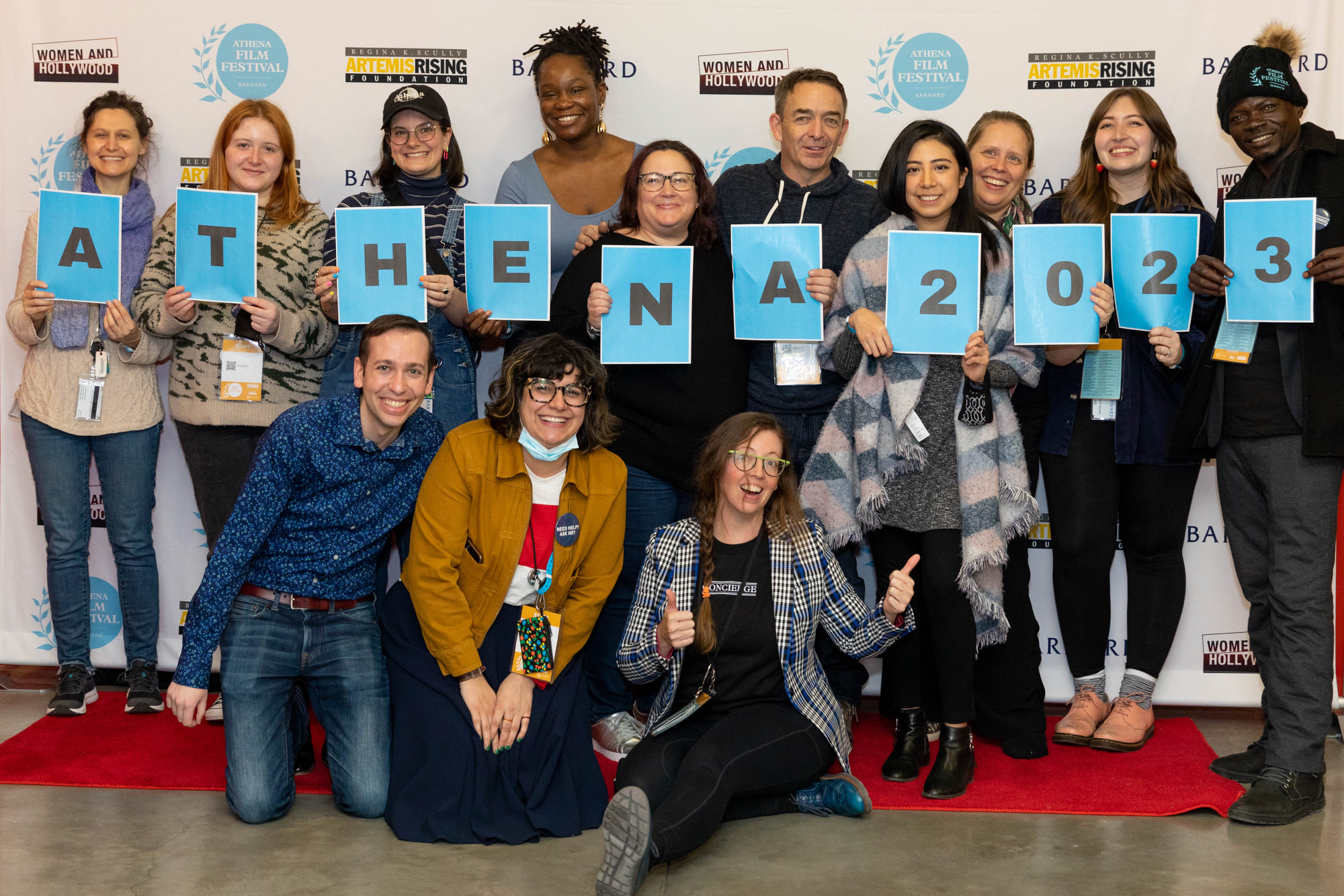 Women and Hollywood founder Melissa Silverstein, who co-founded the festival with Barnard’s Athena Center for Leadership and serves as AFF’s artistic director, says the educational and artistic training aspect of AFF, which includes the Athena Film Festival Writers Lab for screenwriters and the Athena Work-in-Progress program for documentary filmmakers seeking support, sets AFF apart from other festivals.

“We’re unique in the film festival landscape, writ large, because of our commitment to creative development,” said Silverstein.

For Jatene, the opportunity to continue as a post-bac (she began volunteering at AFF in 2018) has helped her gain a fuller appreciation of AFF’s thematic mission. While the festival programming team accepts movies made by artists of all genders, to be an AFF film, the story must have a woman in a leadership role at the center of the narrative. AFF defines women leaders as “women who have risen up, spoken truth to power, women who empower their communities, inspire and educate, or women who simply survive.” The festival, now in its 13th year, is built on an ethos that strives to redefine what women’s leadership can be.

“I think that in New York, it’s the first [film festival] of its kind, honestly, because it doesn’t just focus on women-led films. It focuses on women’s leadership in film,” said Jatene.

“Leadership for women had always been defined by male terms,” Jatene pointed out. “That usually meant the badass woman who measures up to the man. And that left out protagonists who showed courage in other ways.”

One example of an out-of-the-box courageous woman leader could be seen in On the Basis of Sex, the script detailing the story of the late U.S. Supreme Court Justice Ruth Bader Ginsburg’s early career triumph, which won a spot on the first Athena List script competition in 2014, long before it was theatrically released in 2018.

The opportunity to work with the programming team has opened Jatene’s eyes to new career possibilities in the film industry. Jatene hadn’t been aware that programming in the festival circuit was a career that existed. She’d felt drawn to screenwriting, but the experience of programming for the festival has prompted her to think in a new way and to possibly consider a career in film curation. Promoting awareness of film industry opportunities is exactly what AFF organizers want to facilitate with the new fellowship.

“We wanted to make another educational opportunity,” said Silverstein. “It’s perfect for Barnard because it’s an educational institution. Hopefully, it grows.”