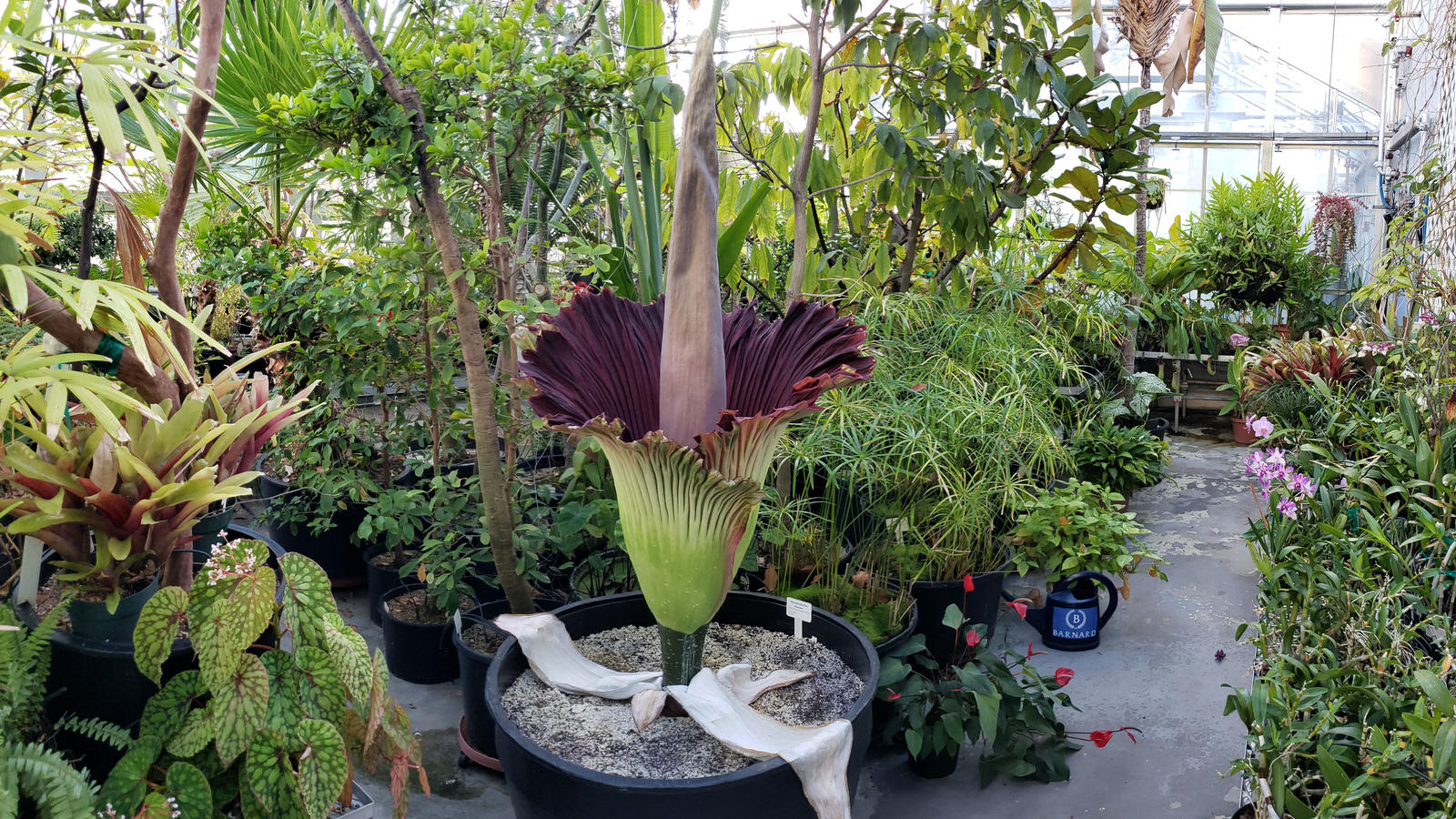 After a seven-year campus residency, the famously smelly plant — standing more than 5 feet tall — is finally opening up.

On those rare and marvelous occasions when an endangered titan arum (Amorphophallus titanum, commonly known as a corpse flower) blooms, it does so with a big, beautiful stink. At the Arthur Ross Greenhouse, where nature doesn’t stop for a pandemic, the community-named Barnard “Berani” (learn why in the Q&A below) is experiencing its first bloom after over a decade of growth and has been doing so via livestream since May 22.

Check out the time lapse video below and some of the media attention it garnered (including amNewYork, Mental Floss, Life Science, and Martha Stewart Living):

“Our specimen seems to be a classic extrovert-introvert,” said Hilary Callahan, the greenhouse director and Ann Whitney Olin Professor of Biological Sciences. “Our brave Barnard ‘Berani’ has chosen to bloom during an unprecedented time of anxiety, sorrow, isolation, and social distancing. Fortunately, we were always planning to augment in-person experiences with online tools so that Barnard students who are away from campus in summer could enjoy the event.”

Native to Sumatra, Indonesia, Barnard’s plant arrived on campus in 2013 the size of a potato, from a crop at the Brooklyn Botanic Garden (BBG). By fall 2019, it had swelled to 10 times that size, weighing in at about 40 pounds. Once it started blooming in April 2020, it grew 4 to 6 inches a day and now stands more than 5 feet tall. Famous for the rotting odor it emits when flowering, the titan arum creates media buzz wherever it blooms, including the New York Botanical Garden in 2018 and the Chicago Botanic Garden in 2016.

Noam Green ’20, who tended to the plant at the greenhouse for four years when it was just a “giant bucket of dirt,” is cheering it on. “For those who haven’t seen it, it might be hard to conceptualize how large the corpse flower is,” Green said. “It’s also weird! The part of the leaf that looks like a trunk has a styrofoam texture that acts like a nutrient highway. It’s truly unlike anything I’ve ever seen before.”

Tristen Pasternak ’22, who was unfamiliar with the plant before arriving on campus, was also awed that Barnard had one in-house. “Since there is no knowing when it will bloom, we are always filled with wonder and anticipation,” Pasternak mused. “The livestream is so wonderful because it makes me feel like I am at the greenhouse. The flower sends the message of love for our school and New York.”

Green, who recently graduated with a double major in history and Jewish gender and women’s studies, finds it ironic that this major event is happening on the campus now, when COVID-19 social distancing has made in-person viewing impossible, but noted that while a show is underway inside the greenhouse, nature has its own timetable. “The fact that it’s happening during a situation that we couldn’t have anticipated doesn’t take away from the excitement,” they said. “If anything, it shows that no matter how hectic or surreal our lives get, the natural world will continue to ground us if we just tune in.”

To learn more about Barnard’s “Berani,” watch the video above, with greenhouse horticulturist Nicholas Gershberg, and read Callahan’s Q&A below.

Where in the world did it come from?

Hilary Callahan: In 1878, Italian botanist Odoardo Beccari published a paper in an Italian journal to describe, classify, and name this species, which is a narrow endemic [a limited population restricted or peculiar to a region] from Sumatra. Botany still recognizes Beccari’s authority and benefits from his success in collecting seeds and growing them in botanical conservatories in Italy and throughout Europe. Barnard’s “Berani” specimen is one of several initiated from the BBG about 10 years ago. Barnard’s greenhouse mastermind Nick Gershberg trained in the BBG’s excellent internship program. After he joined Barnard in 2013, he obtained our specimen through barter, a common practice among academic and public botanical gardens.

What’s with the stink?

Those who crave cell biology facts will love this. As the spadix enlarges, it generates pulses of odor every two hours, convected upward by plant-generated heat that can elevate the plant’s temperature by as much as 10 degrees Celsius above the ambient air. Functionally, this convects the scent upward from the cool rainforest understory, possibly attracting insect pollinators. Less spectacular relatives in the arum family also have this thermogenic habit when they bloom. Physiologically, there is good evidence that plants’ thermogenesis entails a metabolic pathway distinctive to plants, coded by nuclear genes, including a key enzyme called alternative oxidase (AOX), expressed in the inner membranes of the mitochondria inside cells.

Is it adaptive to be so large or so smelly?

Knowledge about the titan arum’s odor is based on the study of cultivated plants. It’s a huge challenge to study its pollination biology and chemical ecology in the wild, where it’s tricky to locate and track populations. Based on natural history, it is likely that nocturnal insects visit the plant for its smell and warmth, possibly becoming trapped within the spathe. Natural history also suggests that its fleshy colorful fruits are attractive to birds such as hornbills, which would serve as effective long-distance dispersal vectors. A Dutch botanist, Wilbert Hetterscheid, is the world expert on the species and has advocated for formal study of these important ecological processes to aid conservation in the wild. Until then, the best way to conserve the species is to conserve the rainforest and the planet’s sustainability and to care for captive specimens.

How is this species useful?

Its most prominent role is as “charismatic megaflora.” It is an important emblem of rainforest conservation and has starred in many nature documentaries. Ethnobotanists interviewing local people living in the titan arum’s natural habitat have learned that it is not considered useful for building or making clothing or household items, nor for medicine or personal care products. In raw form, it is inedible and toxic, similar to most members of the arum family in producing copious calcium oxalate. Interviewees do mention that outsiders to their communities often seek out guides to find and collect corms for export, possibly for processing and consumption as alternative medicines or as a horticultural novelty for private collectors. This type of harvest is an added threat to a species already endangered for other reasons.

As the spadix enlarges, it generates pulses of odor every two hours, convected upward by plant-generated heat that can elevate the plant’s temperature by as much as 10 degrees Celsius above the ambient air.

Why is it endangered?

Three kinds of rarity make it inherently extinction prone: Its ecology is specialized, its populations are small and sparse, and it is restricted geographically. The Indonesian government lists the species as endangered and manages its natural park and forest resources for species protection and recovery. Globally, the titan arum is on the Red List of threatened species, administered by the International Union for Conservation of Nature (IUCN), and is protected by the Convention on International Trade in Endangered Species (CITES). It is in decline because of habitat destruction and over harvesting. The questionable security of plants in the wild is matched by the difficulty of growing them in captivity. Growing it from a seed requires considerable knowledge, cooperation, care, and resources. Many other members of the genus Amorphophallus are also endangered in the wild and are also popularly distributed and grown by experts working at arboreta, botanical gardens, and conservatories. Successfully blooming a titan arum is an emblem of excellence in horticultural practice. In tribute, Nile Kurashige ’01 congratulated us from her position at the greenhouses of the University of Washington and has gifted the Ross Greenhouse with four other Amorphophallus species.

Is this plant the largest in the world?

This species is noted for being the tallest unbranched inflorescence. In 2010, Guinness World Records recognized the tallest bloom of a titan arum ever, by a private grower in New Hampshire. It was 3.1 meters tall, which is a little over 10 feet. We’ll be careful to measure ours when it reaches its maximum height. The largest individual flower grows on Rafflesia arnoldii, also rather stinky and endemic to the rainforests of Sumatra. In contrast, the smallest flowers are less than half a millimeter in size, even though they are related closely enough to be classified in the same botanical family.

How did it get the name “Berani”?

It’s become a bit of a tradition to hold a naming contest whenever a titan arum blooms in an academic conservatory or greenhouse. Our contest happened via Instagram, and we asked contestants to think beyond the stink, considering things like rainforests, Indonesia, and Barnard’s community. The winning name was suggested by a plant-loving high school junior in New Jersey and derives from the Indonesian words pemberani and berani. The dictionary translation of these words: “brave, bold, unafraid.”

To see more of the titan arum’s transformation, check out the photos below: 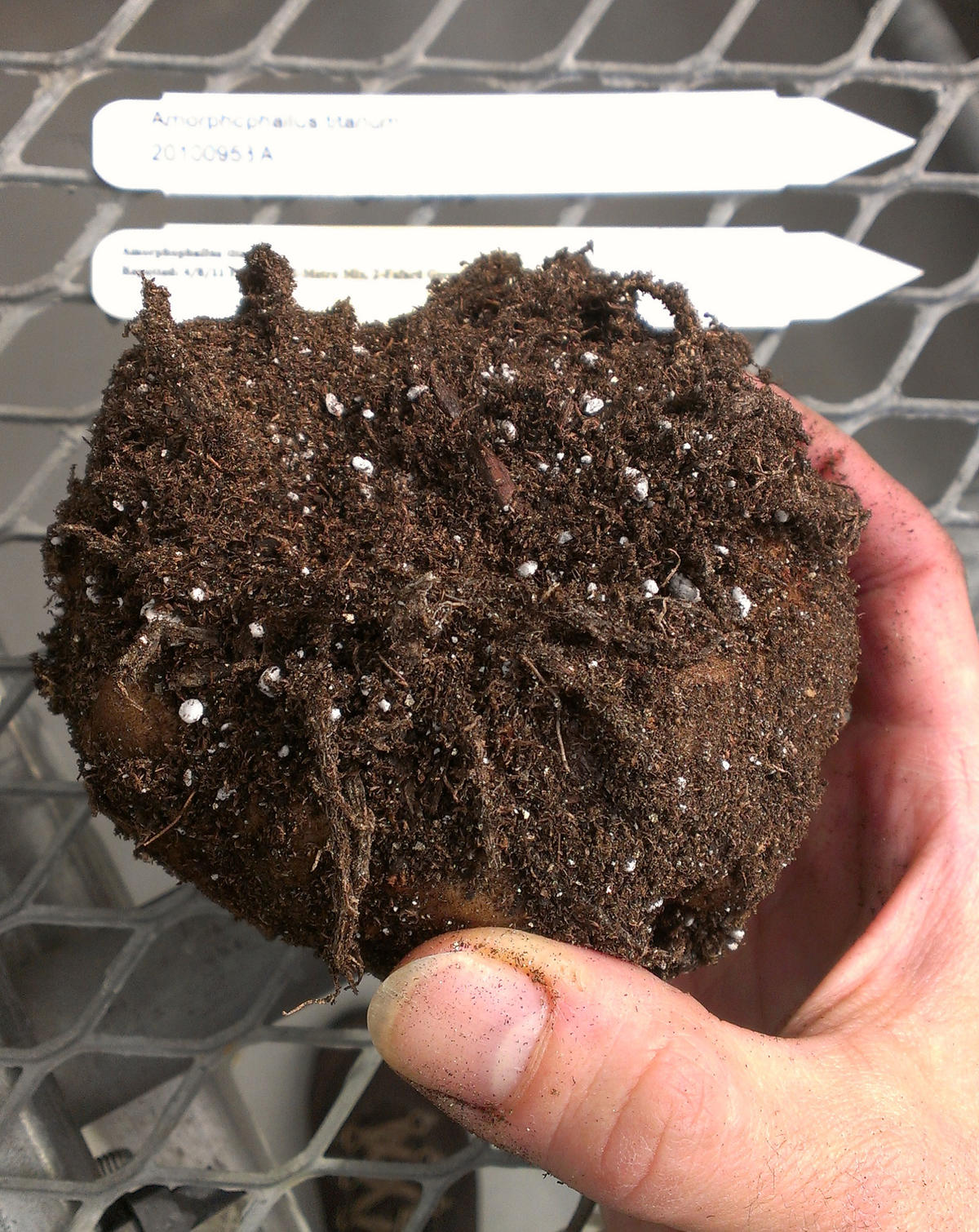 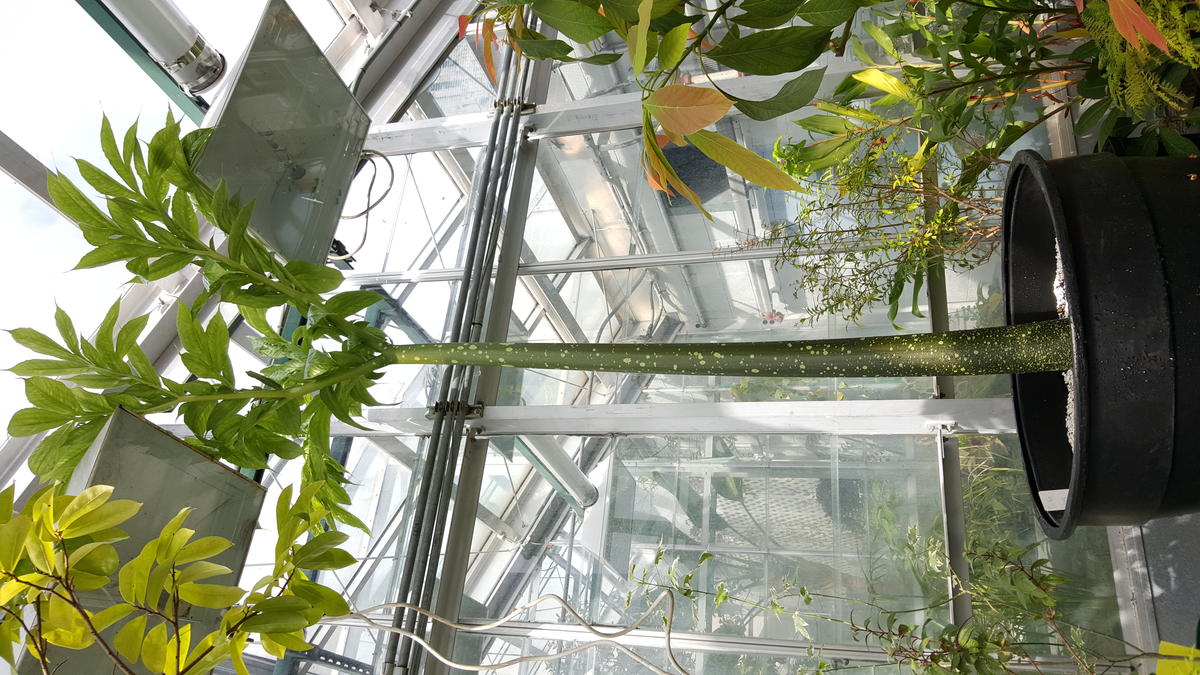 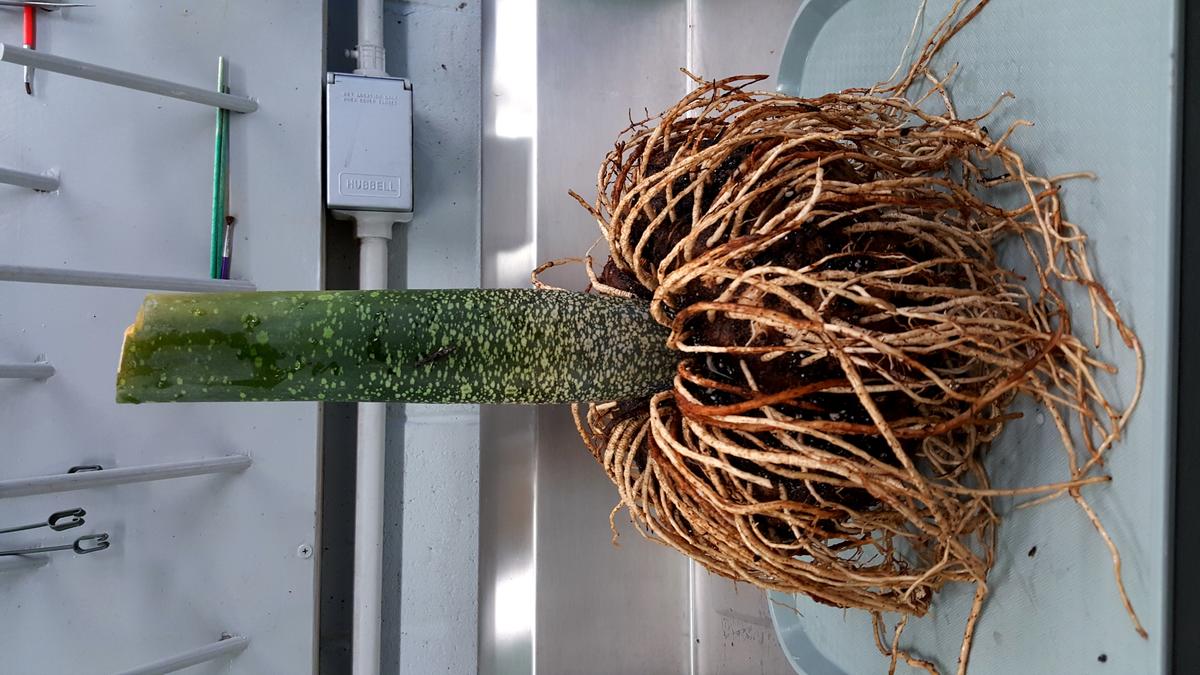 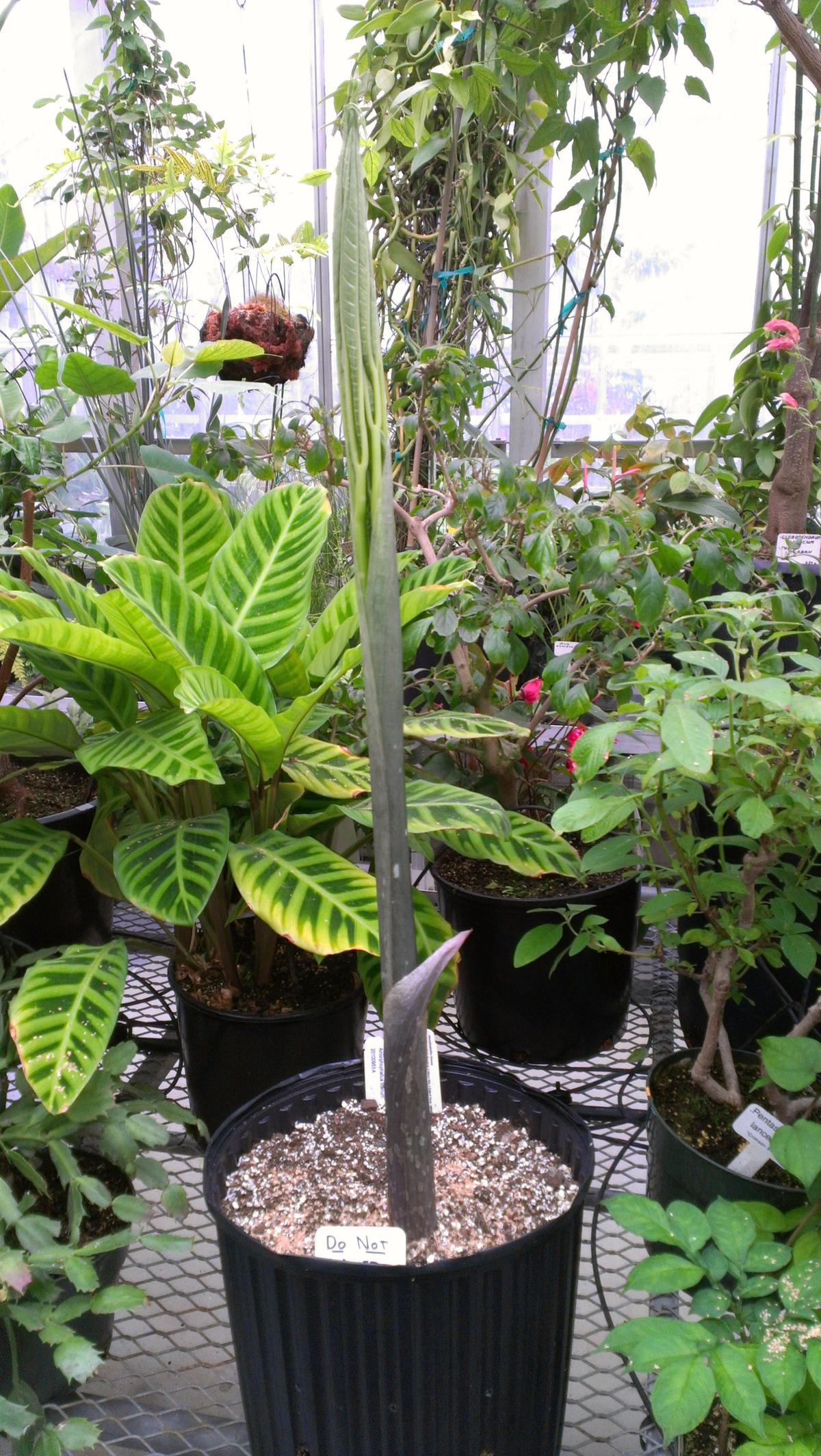 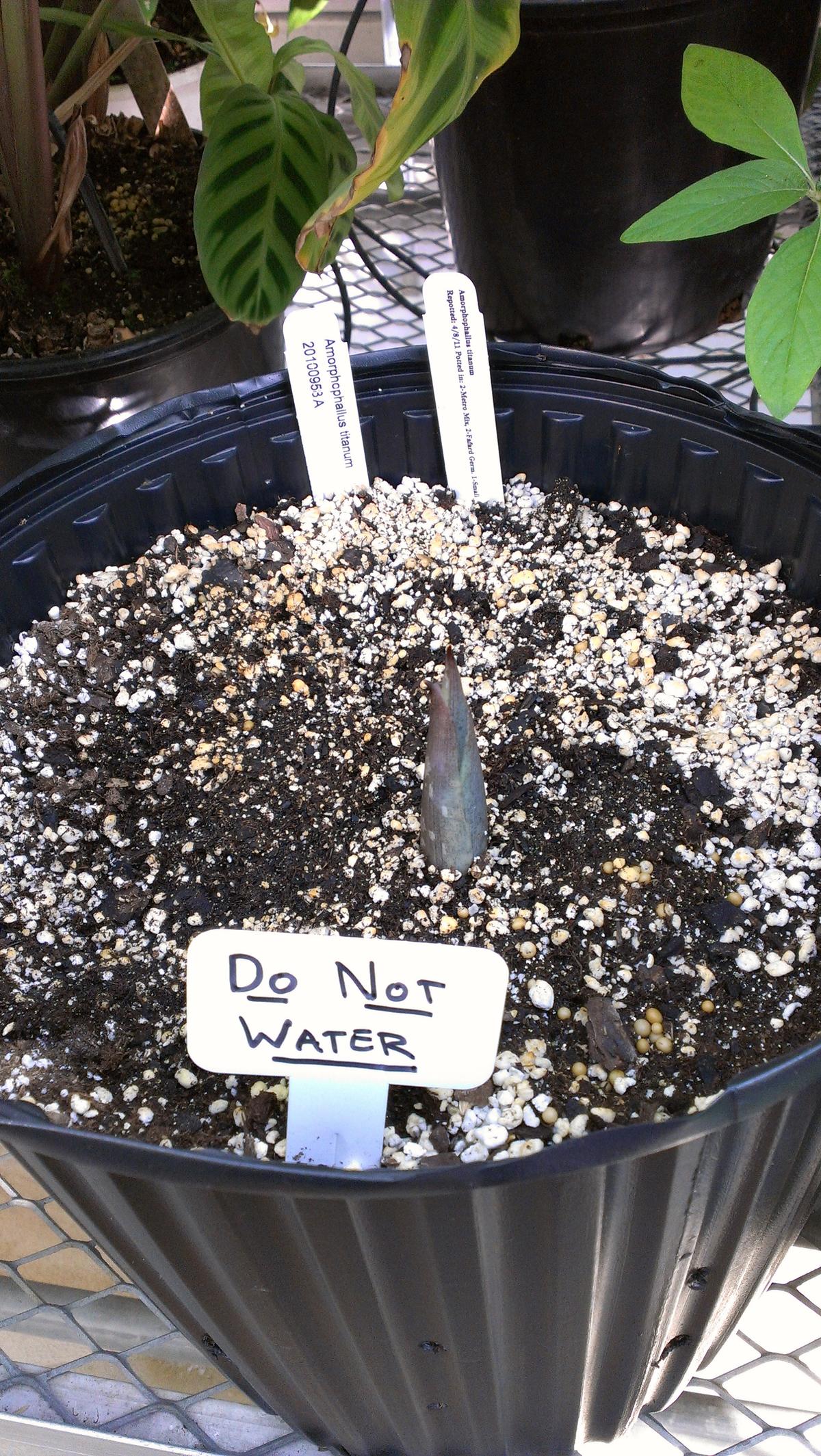 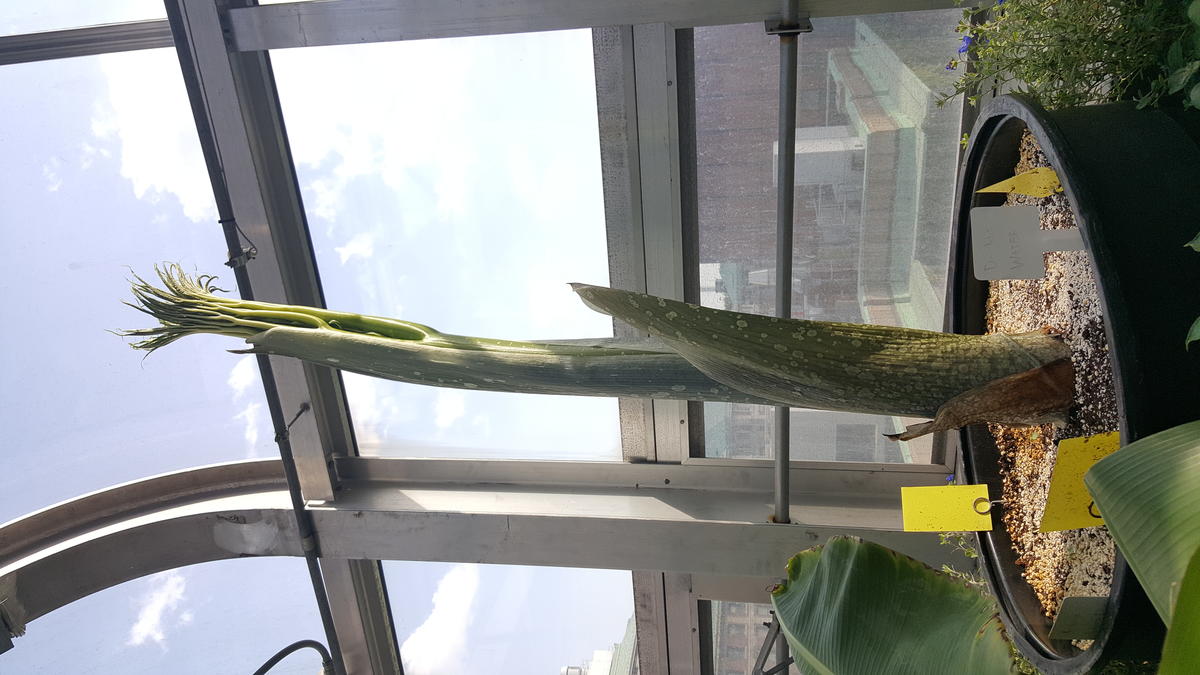 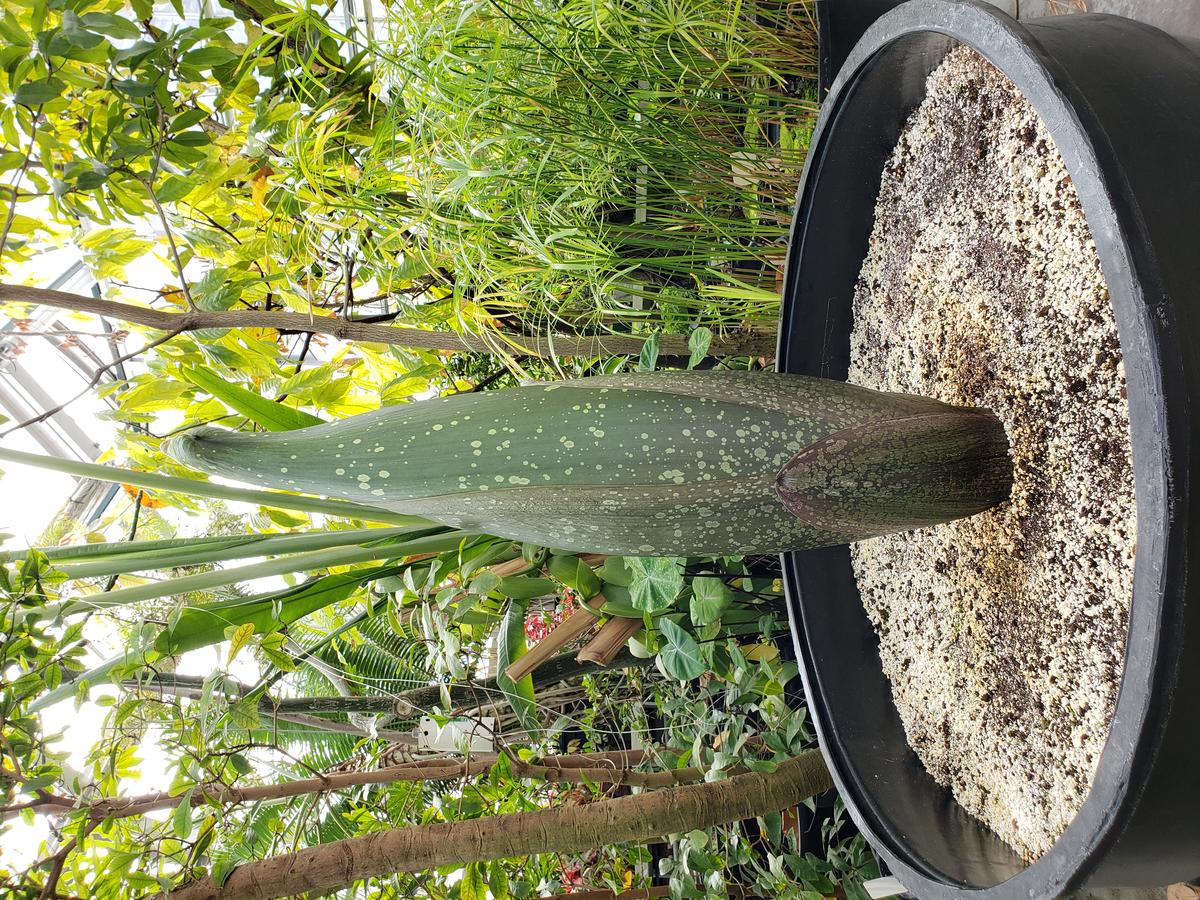 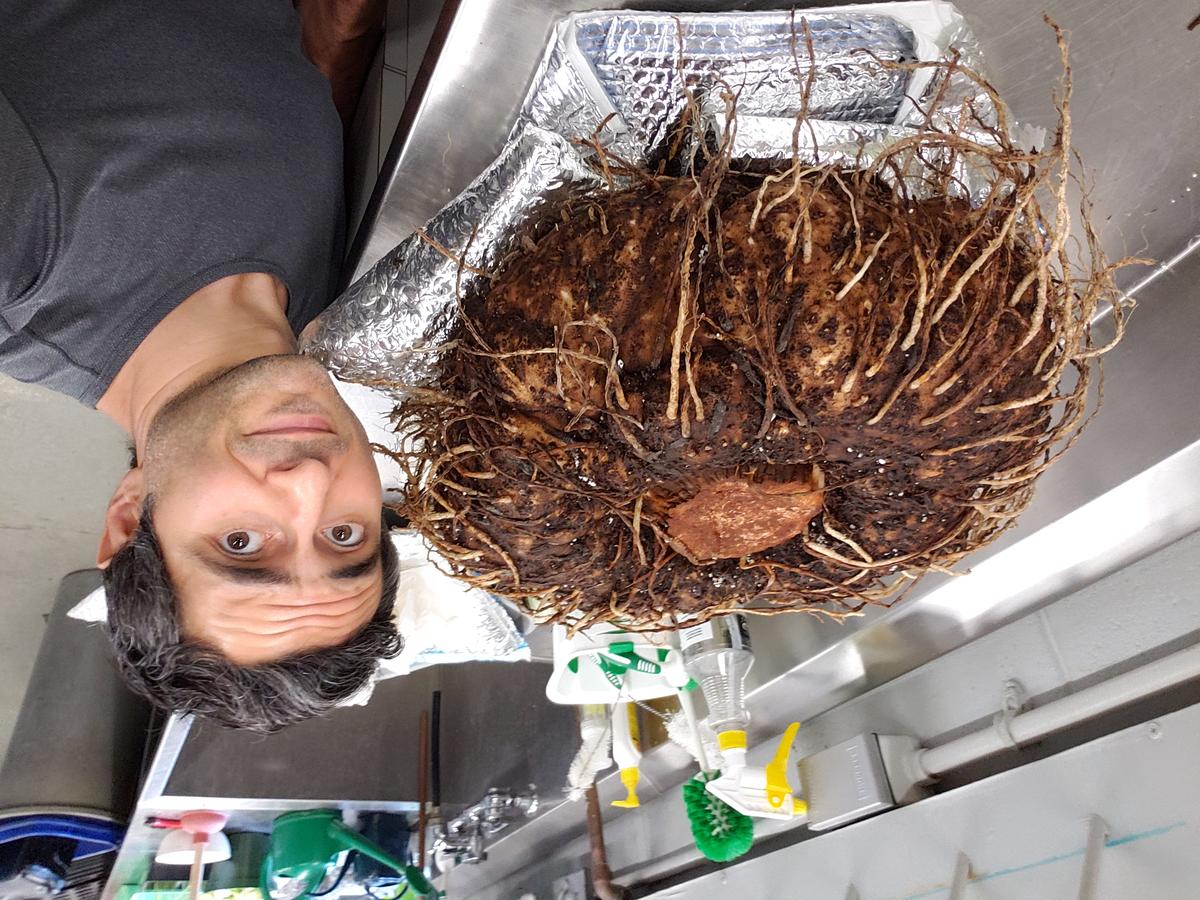 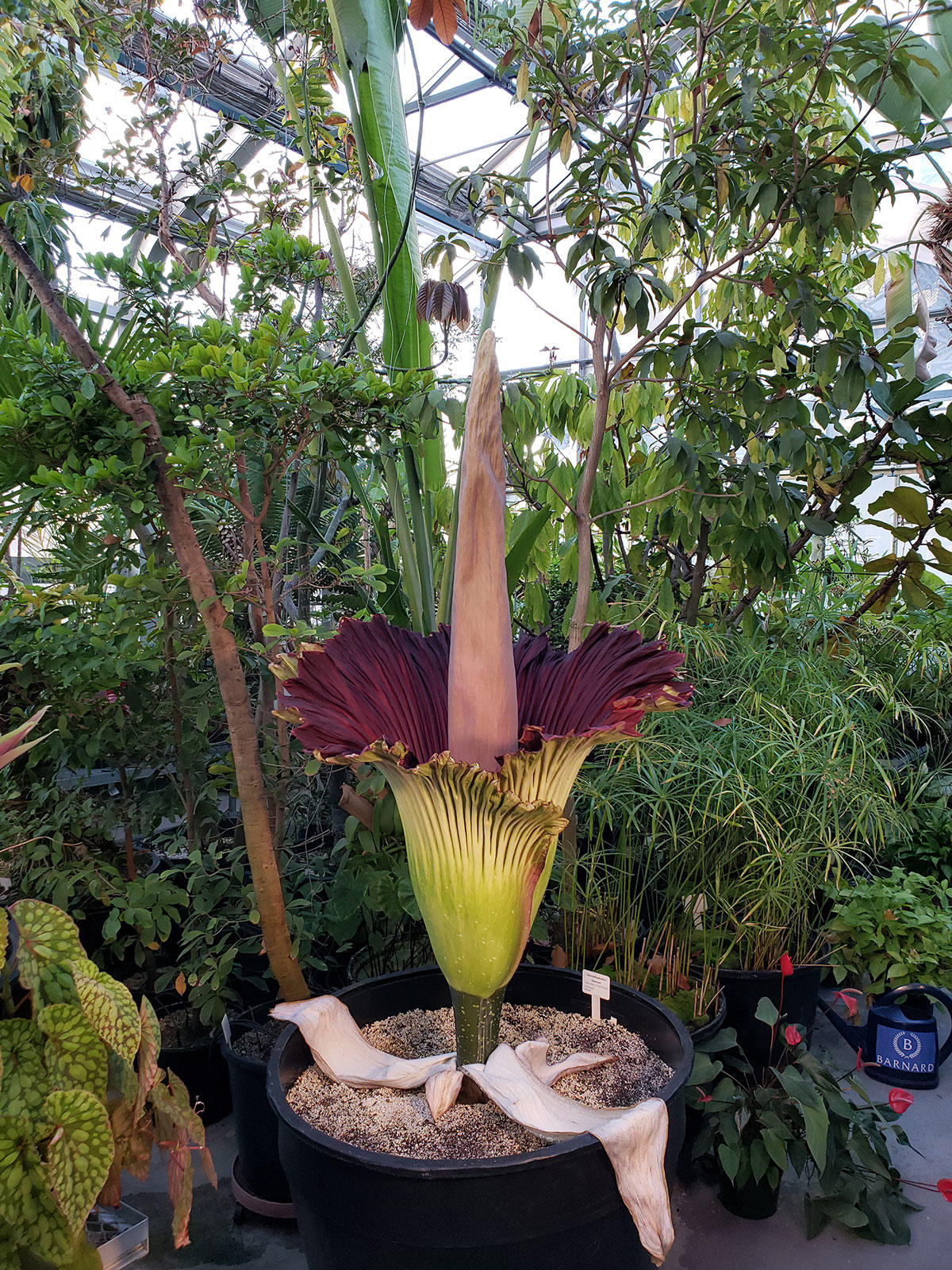 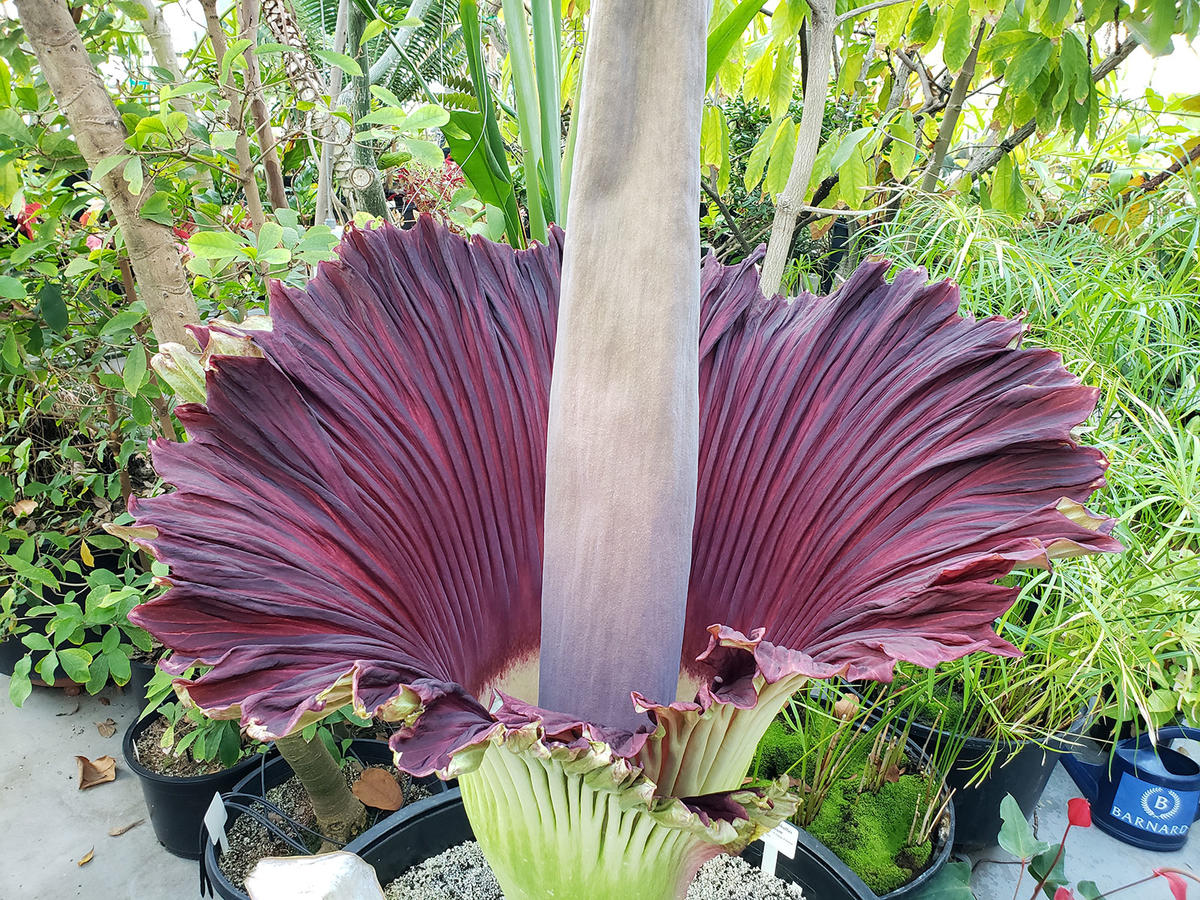 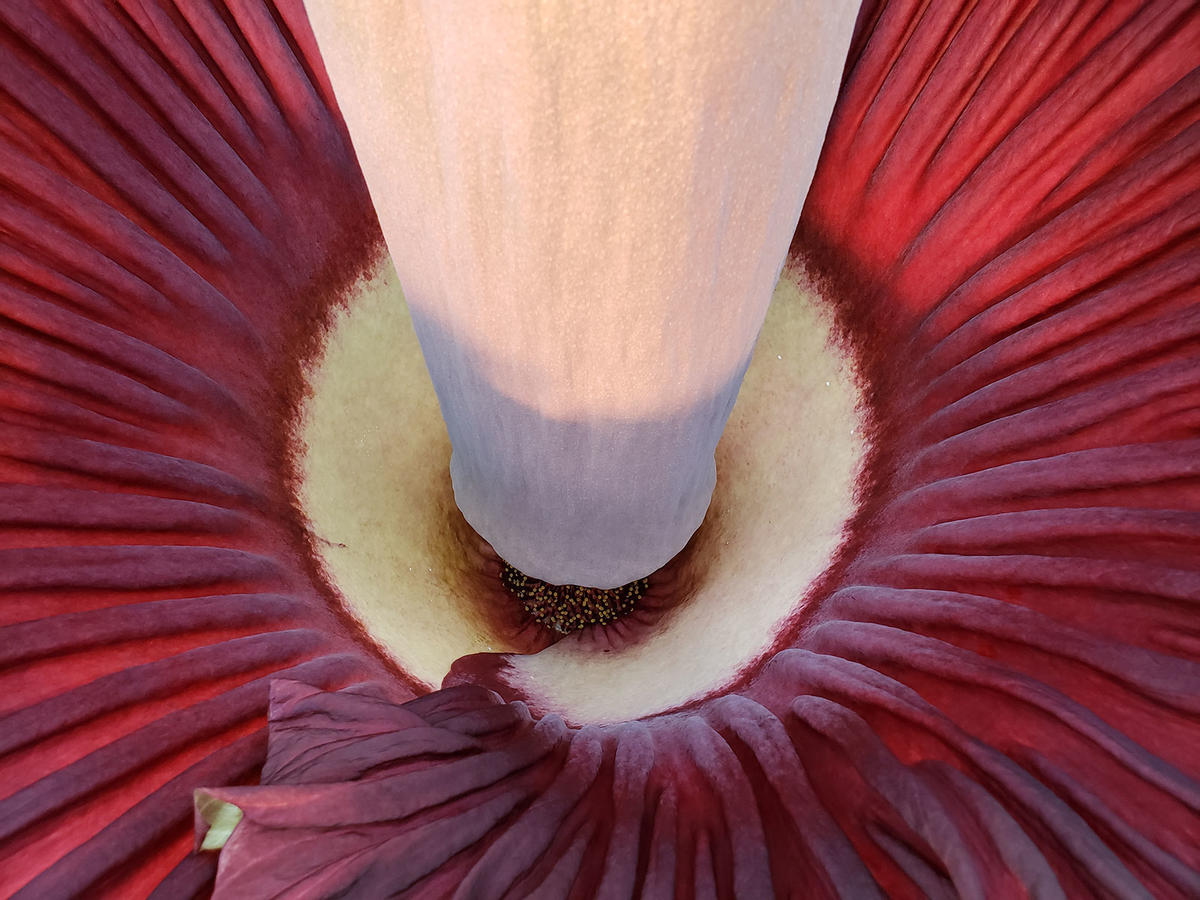 When the titan arum arrived on campus, it weighed in at 3 pounds.

Prepping the plant for repotting, after it went dormant

The leaf emerging from dormancy for the first time at Barnard

A new leaf emerges from dormancy, 2017

The new shoot, on the day it was confirmed as a bloom

The now supersized tuber, shown next to astonished medium-size human for scale, after going dormant in summer 2019

A closer look at the plant’s vibrant color

The flower's spathe is as soft as a rose petal, while the spadix is firm to the touch. 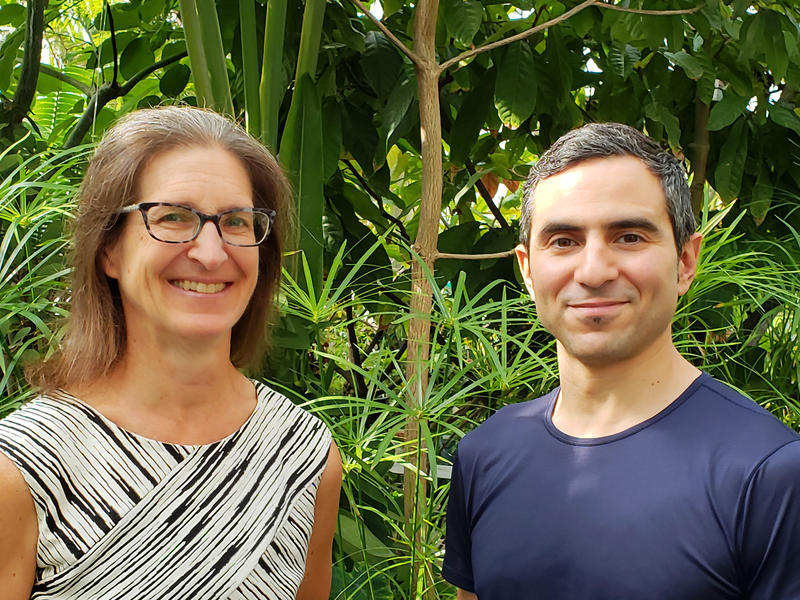