The Class of 2021 Celebrates the Beginning of a New Journey

Barnard’s graduating Class of 2021 celebrated the end of a chapter and the beginning of a new one with international thinkers and news breakers as well as champions of academic and artistic excellence in a virtual ceremony on Thursday, April 29, 2021, for the College’s 129th Commencement. Twelve-time Emmy Award-winning journalist Christiane Amanpour delivered, via video, the keynote address to a rapt audience of new Barnard graduates and faculty, family, friends, trustees, and staff. 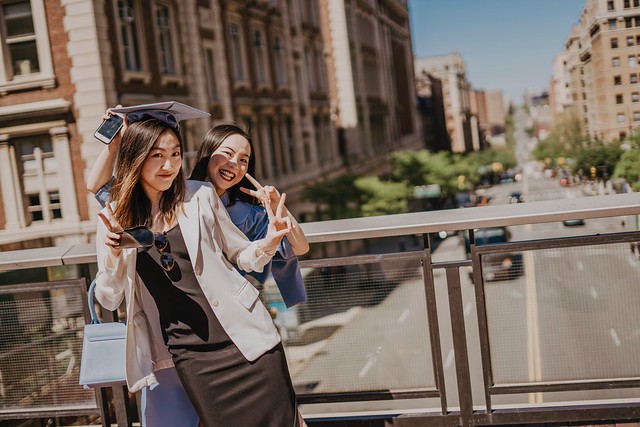 London-based journalist Christiane Amanpour, CNN’s chief international anchor and host of the global affairs program Amanpour, infused vision and a sense of sustained activism throughout her speech. With a glass half full of optimism, Amanpour spoke about the power of women, rejecting patriarchy, and making good trouble when fighting against injustices.

“In this past terrible COVID year, women have stood up and led with great success,” Amanpour told graduates. “Whether female elected leaders from New Zealand to across Europe, whether breaking gender and racial glass ceilings like your own Vice President Kamala Harris, whether in protests on the street, such as the female founders of the Black Lives Matter movement or protests in the sports arena by female soccer players, tennis stars, the WNBA, and so many others. Whether in grocery stores, in hospitals and care homes, from arts to science to economics, this year has seen women and girls lead like never before. So seek them out, know their stories, learn how they did it, and what success and failure they encountered along the way. Learn also that they had to struggle to achieve, and there is value in struggle; take it from me. And they are your role models.”

Amanpour, who began her career in 1983 as an entry-level assistant on the international assignment desk at CNN’s headquarters in Atlanta and rose through the ranks to become the network’s leading international correspondent. Over the course of four decades, Amanpour has fearlessly reported on the Gulf War, the devastating 2010 Haitian earthquake, the genocide of Bosnian Muslims, and more. Moved to speak out against Bosnia’s human rights abuses, Amanpour had said, “There are some situations one simply cannot be neutral about, because when you are neutral you are an accomplice.”

Amanpour offered that same energy and conviction to the Class of 2021, noting how they survived a pandemic and pushed for equity everywhere. To complement their sustained courage, Amanpour advised students to not take their diplomas lightly. “Please understand that life is not easy; the world does not owe you,” Amanpour told graduates. “It is not because you present for an interview with your shiny new Ivy League diploma that you’re going to have instant value. Earn it, enjoy the striving. Take it from me: That is the very, very best part.”

The Medals of Distinction, the College’s highest honor, were presented by Barnard president Sian Leah Beilock, who presided over the ceremony live from the Minor Latham Playhouse in Milbank Hall on campus. Recipients included Amanpour, along with three other honorees: Rebecca Nagle, an award-winning advocate, writer, and citizen of Cherokee Nation who is also the host of the podcast This Land; Okwui Okpokwasili, a performer, choreographer, and writer who creates multidisciplinary performance pieces; and Myriam (née Morgenstein) Sarachik ’54, a dedicated physicist and distinguished professor emerita of the City College of the City University of New York (CCNY). Read the citations for Amanpour, presented by President Beilock; Nagle, read by Tirzah Anderson ’21; Okpokwasili, read by Brianna Johnson ’21; and Sarachik, read by Dominique Macaluso ’21. Watch a video of each of the medalist’s comments below:

In her address to the Class of 2021, President Beilock said, “This year has tested us, again and again, myself included, by throwing the unimaginable in our faces, and compelling us to — one way or another — figure it out. And it’s taught us not only that we all have the ability to figure it out when we dig in hard enough — but that the practice of performing under pressure makes us stronger. I have little doubt that because of this, you — the extraordinary Class of 2021 — are the strongest class Barnard has ever sent out into this world.” President Beilock also named Solace Mensah-Narh ’21 as the recipient of this year’s Frank Gilbert Bryson Prize, awarded to a senior who, in the opinion of the class, "has given conspicuous evidence of unselfishness and who has made the greatest contribution to Barnard during the college years." Read a transcript of President Beilock’s speech.

Additional speakers at Commencement included Provost and Dean of the Faculty Linda A. Bell, who offered greetings on behalf of the faculty. Senior class president Norah Hassan ’21 gave the Charge to the Class of 2021. Elizabeth “Lizzy” Bier ’21 and Phanésia Pharel ’21 shared reflections on their academic and senior experiences, respectively.

Senior Fund co-chairs Julia Betancourt ’21 and Ohanna Mohammad ’21 announced a Senior Class Gift to support the College as it becomes more accessible to students, regardless of their abilities or backgrounds. The Senior Class Gift will focus on the First-Generation/Low-Income Library (FLI), which provides first-generation and low-income students with textbooks for their courses; and the Center for Accessibility Resources and Disability Services (CARDS), which ensures that students with disabilities will receive the necessary services and support throughout their four years at Barnard.

In a prerecorded video, Cheryl Glicker Milstein ’82, P’14, Chair of the Barnard Board of Trustees, praised graduates for their adaptability over the year, saying, “What you have been able to reimagine and create is nothing less than awe-inspiring. Thank you for showing us the expanse of the possible and for teaching us all so much about resilience, compassion, and the true meaning of community.” Glicker Milstein also announced Fatima Burgos Hernandez ’21 and Phanésia Pharel ’21 as the recipients of the inaugural Alicia L. Lawrence Memorial Award.

Hariti Patel ’21, Lauren Pham ’21, and Ria Sawhney ’21, who delivered remarks at the Baccalaureate Service on April 25, highlighted the importance of family and community, diversity, and equality. Thanking Barnard faculty, students, and staff, Patel said, “Being thankful and appreciative of others will foster positivity and respect that will unify all of us.” Pham spoke of finding a home in the Catholic Ministry on campus, and Sawhney shared a reading from the Sikh faith that exemplifies the Sikh concepts of equality and freedom of religion.