On campus, an exhibition examines the history of racist housing policies that led to widespread segregation in New York City and across the U.S. 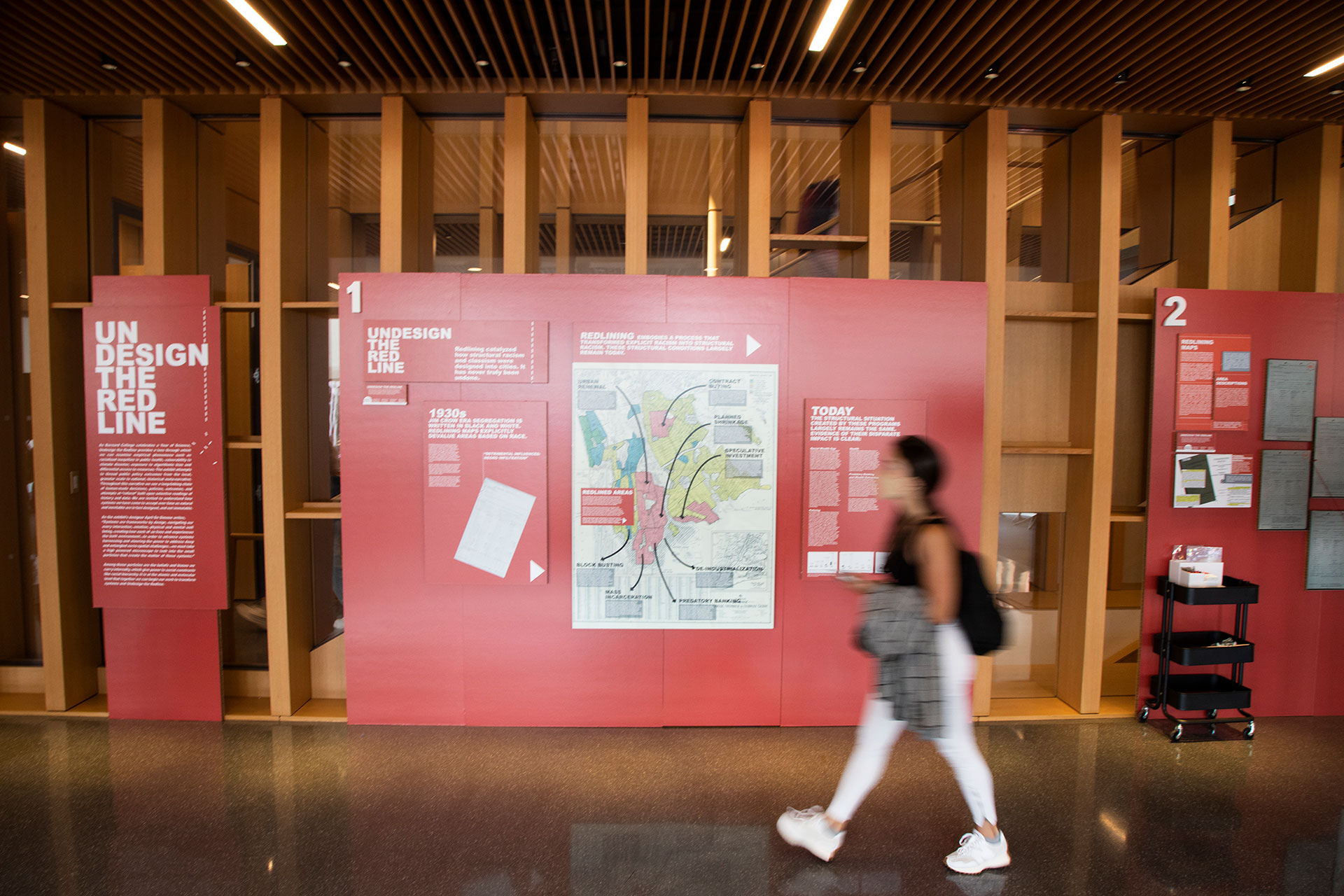 Just beyond the entrance to the Milstein Center for Teaching and Learning on the Barnard campus, the vestibule is filled with six large, stop-sign-red panels. They mark the start of the exhibition “Undesign the Redline,” which opened on September 30, 2021. This interactive installation — a joint effort among staff, faculty, community members, and students — combines history and storytelling with community outreach to reckon with systemic racism and the legacy of redlining in Barnard and Columbia’s neighborhoods and in New York City as a whole.

Watch the video below, featuring Miriam Neptune and others discussing the exhibit.

The intention is to bring the Barnard community together in conversation around structural racism and how “redlining” — the race-based practice of denying financial services (especially mortgages) to people based on where they live rather than on their individual qualifications — has continued to impact the present and how to change that going forward.

“I think that this is an important narrative to have in an institution like ours, where many people from many different backgrounds are going to school together,” says Miriam Neptune, senior associate director of the Barnard Center for Research on Women (BCRW) and one of the core organizers of “Undesign the Redline” at Barnard.

Neptune witnessed firsthand the kind of critical learning and dialogue that the Undesign project provoked when she helped bring the exhibit to Smith College in 2016 during her tenure there as the digital scholarship librarian. “I saw residence hall students coming together with their whole dorm to have a conversation on race and class at 9 o’clock at night,” she recalls.

Neptune wanted to spark these kinds of crucial conversations on Barnard’s campus, too. So she reconnected with April De Simone, co-founder of Designing the We, the mission-driven design studio behind “Undesign the Redline.” De Simone, who has a background in architecture, created “Undesign” after an archival research trip during which she stumbled upon an old redlining map of her hometown, the Bronx.

“Everything you’ve seen your community go through is predicated on these decisions,” she says. “How do we show this to the world?”

The stakeholders and a group of Barnard students met throughout 2020 and into the summer of 2021 to brainstorm and learn together, making redlining central to discourse on campus long before the exhibition was on display.

“Redlining is something that is often talked about very casually and often not well understood,” Rocco says. “As someone that studies neighborhoods and revitalization, it comes up over and over again.”

Redlining has a long history in the U.S. Starting in the 1930s, federal planning officials from the Home Owners’ Loan Corporation (HOLC), a New Deal-era program that offered government-insured mortgages, created neighborhood-level, color-coded maps illustrating which areas were “good” investments. Areas where Black residents lived were predominantly categorized as a “hazardous” investment and demarcated in red on the HOLC maps, blocking minority communities from both public and private funding sources and denying them access to those government-backed mortgages. Additionally, white people were often prohibited from selling their homes to people of other races.

“You can’t really help unless you know the context,” Neptune says. “You can’t make yourself genuinely a part of something if you’re not aware of the conditions that have created the situation.”

“Undesign the Redline” is organized into sections that aim to simultaneously educate and involve viewers. They include an introduction to structural racism; a lesson on redlining through historical maps of New York City; where redlining fits into the broader history of racism; first-person stories; and how to “undesign the line.”

“We acknowledge how in this wonderfully diverse college community in the city at large, we have all been impacted in some way, or unwittingly contributed to, or some of us have benefited from, the idea of a hierarchy of human value,” Neptune says.

Each element of the installation contains an interactive component. Visitors are invited to put push pins into the old redlining maps marking places they once lived and where they have moved since, which encourages people to think about how past events influence people’s choices today.

“The exhibition captures this narrative of spacialized psychologies of inequity,” says De Simone. “It really begins to contextualize who is in the position of authority and how we are in some form complicit.”

Other panels of “Undesign” offer the chance for visitors to add their own encounters with legacies of redlining, posting handwritten cards onto the exhibit among recent history, such as an account of Inwood’s 2020 rezoning, and longer histories, like Manhattan’s origin as Lenape tribal territory. There is also an area for people to add ideas about how to conceptualize and invest in a more equal future.

It’s a vital conversation for the country at large but has an important resonance at the College, says Thill: Graduates exit Barnard’s protective gates to be faced immediately by choices whose contours are shaped by systemic racism.

“It’s the most pressing thing you encounter as a young graduate living in New York,” says Thill, the Milstein Center’s exhibits designer and a community activist. “Trying to find affordable rent, moving into neighborhoods that have been disinvested, how to not exacerbate these problems further.”

For Thill, the exhibition prompts not only vital learning and reflection but is also a call to action for students and city dwellers to take part in creating a more equitable future. “I’m honored that I can bring what I learned over the past five years of activism and organizing to the project and to the campus, where I was a student, to start those conversations sooner.”

From November 18th to 19th, a free virtual symposium, Undesign the Redline @ Barnard, will bring together community members, artists, faculty, staff, and students to engage with a broad range of topics from digital redlining and NYC public schools to Harlem resident experiences and reparations through research, dialogue, and artistic practices. For more info, visit library.barnard.edu/undesign.

“Undesign the Redline” will be on display in the Milstein Center for Teaching and Learning until May 2022. Read more about the exhibition in Barnard Magazine's Winter issue, available January 2022.