For the second time in two years, the giant inflorescence is putting on a show at the College’s Arthur Ross Greenhouse.

When Barnard’s titan arum (Amorphophallus titanum) made its awe-inspiring debut in May 2020, the country was reeling from rising COVID-19 cases and the College was practicing social distancing. Very few people witnessed in person the first-ever opening of the flower, which took about a decade of maturation — the specimen in Barnard’s greenhouse was first initiated at the Brooklyn Botanic Garden (BBG) and came to campus dormant in the early 2010s the size of a potato. It grew leaves year after year and reached a weight of 40 pounds in 2020. This month, just two years after its first bloom — the huge inflorescence, which soars to more than 6 feet tall — is once again ready to unfurl in Barnard’s Arthur Ross Greenhouse.

“We are so lucky that [greenhouse administrator] Nick Gershberg and his students know how to take such good care of this wonderful organism, renowned for its independence and wild unpredictability. In marveling at this one potted plant, we also marvel that they still grow in their natural habitats in Indonesia, needing just a tropical climate and, especially, enough space and time to grow undisturbed,” said Hilary Callahan, the greenhouse director and Ann Whitney Olin Professor of Biological Sciences. “Sometimes we refer to this species as ‘charismatic megaflora,’ because much like an elephant or a giant panda, it is an emblem for biodiversity conservation, important everywhere, from the tropics to right here in New York City.”

The corpse plant — native to Sumatra — acquired worldwide fame for the rotting odor it emits when flowering. Whether at Barnard, the New York Botanical Garden, or the BBG, the corpse flower creates a huge buzz whenever it blooms. The Barnard community affectionately calls this specimen “Berani” — derived from the Indonesian words pemberani and berani, which are translated as “brave, bold, unafraid.”

“It takes seven to 10 years for the titan arum to bloom the first time and become reproductively mature,” Gershberg explained. “After that, it can bloom whenever it is strong enough.”

The excitement around the flowering isn’t just for humans, as bugs and birds also find it attractive. “Based on natural history, it is likely that nocturnal insects visit the plant for its smell and warmth, possibly becoming trapped within the spathe,” Callahan explained when it first bloomed, adding that it pulses an odor every two hours and generates heat by as much as 10 degrees Celsius above room temperature. “Natural history also suggests that its fleshy colorful fruits are attractive to birds such as hornbills, which would serve as effective long-distance dispersal vectors.”

As for humans, Gershberg asserts that it’s one of the most fascinating plants he’s ever cared for. “In all of its stages of growth, the plant possesses a captivating, elegant beauty. Everything about it aesthetically is complex and unusual; it’s hard to take your eyes off it. Even the smell is more complex than people often realize; it evolves and is far more nuanced than what it emulates,” said Gershberg. “Ironically, its care is actually not very complicated at all. Yes, you have to follow a few basic practices reliably. But it is never bothered by pests and is otherwise very low maintenance. It just demands patience and, of course, plenty of space.”

Because the peak bloom, and intense stink, of its flowering cycle occur quickly — once the spathe opens, the plant has 24-36 hours before it closes back up and falls over — biologists, horticulturalists, plant aficionados, and the curious often flock to botanical gardens and greenhouses to see and smell the marvelous titan arum in person. Barnard’s Berani is no exception. When Berani blooms again this year, it will expect an audience from the Barnard community.

For anyone unable to see Berani in its full glory in person, a time-lapse video from 2020 showcasing its rapid growth, from bud to bloom, can be almost as gratifying (albeit nonodorous). For the real-time experience, tune into the livestream video below.

For information on how to see Berani in person, visit the event page here. Learn more about Berani’s inaugural bloom and why the plant makes such a big stink here. 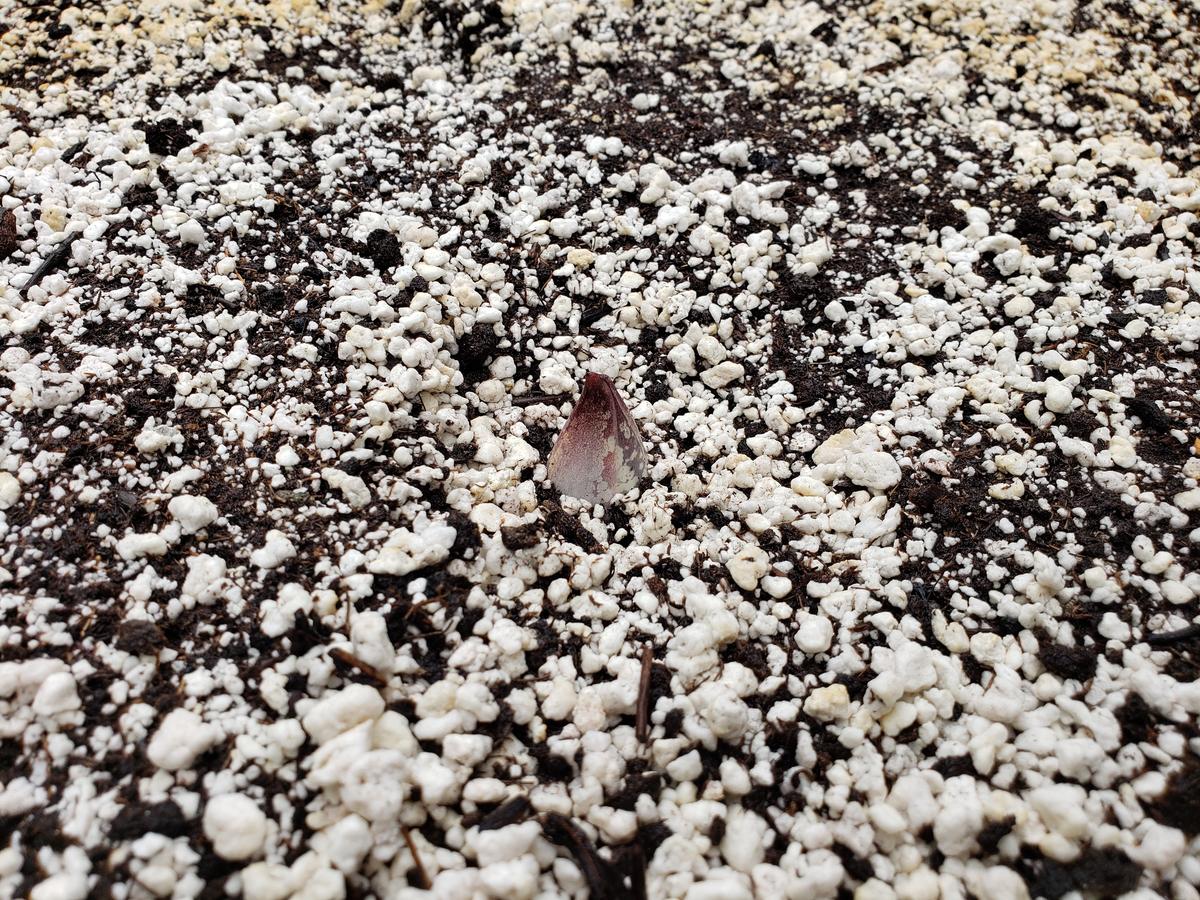 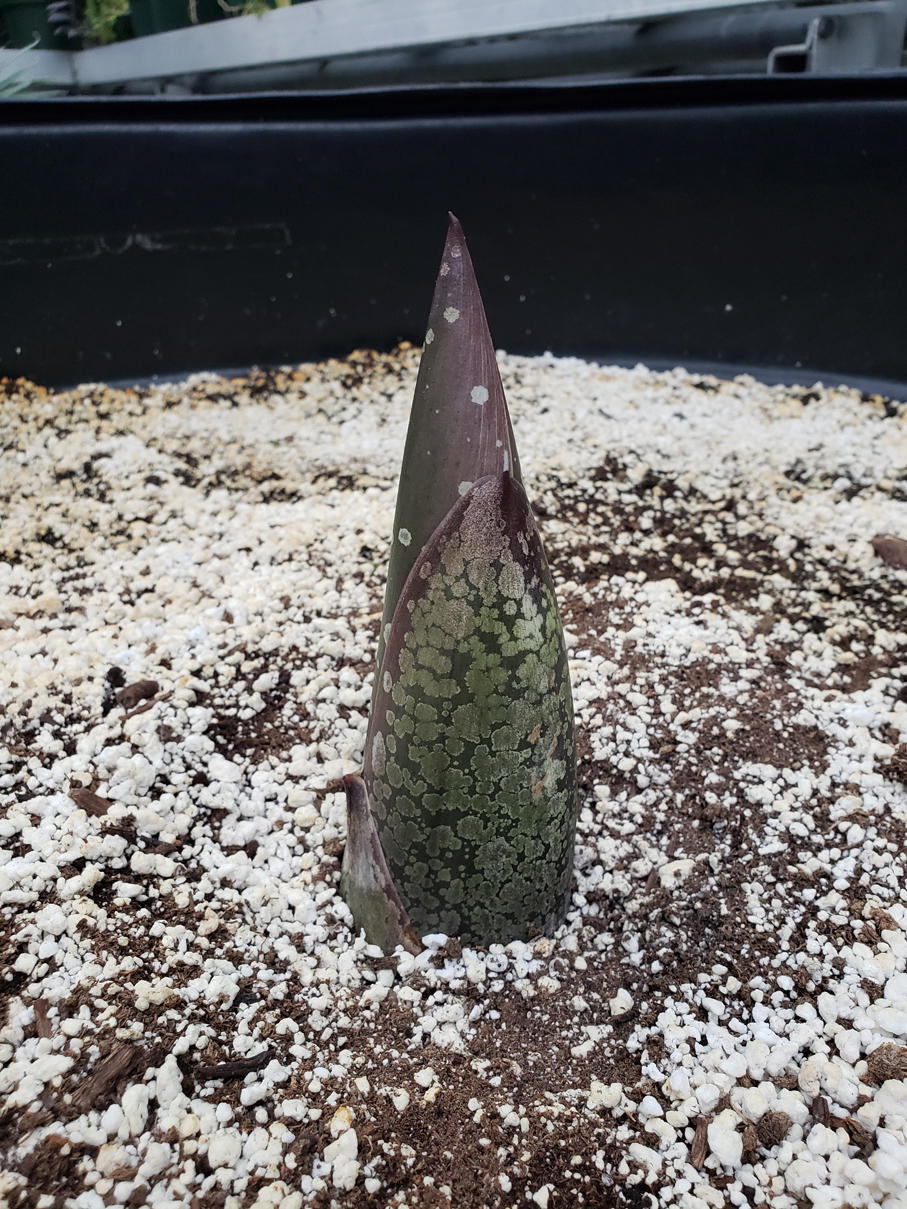 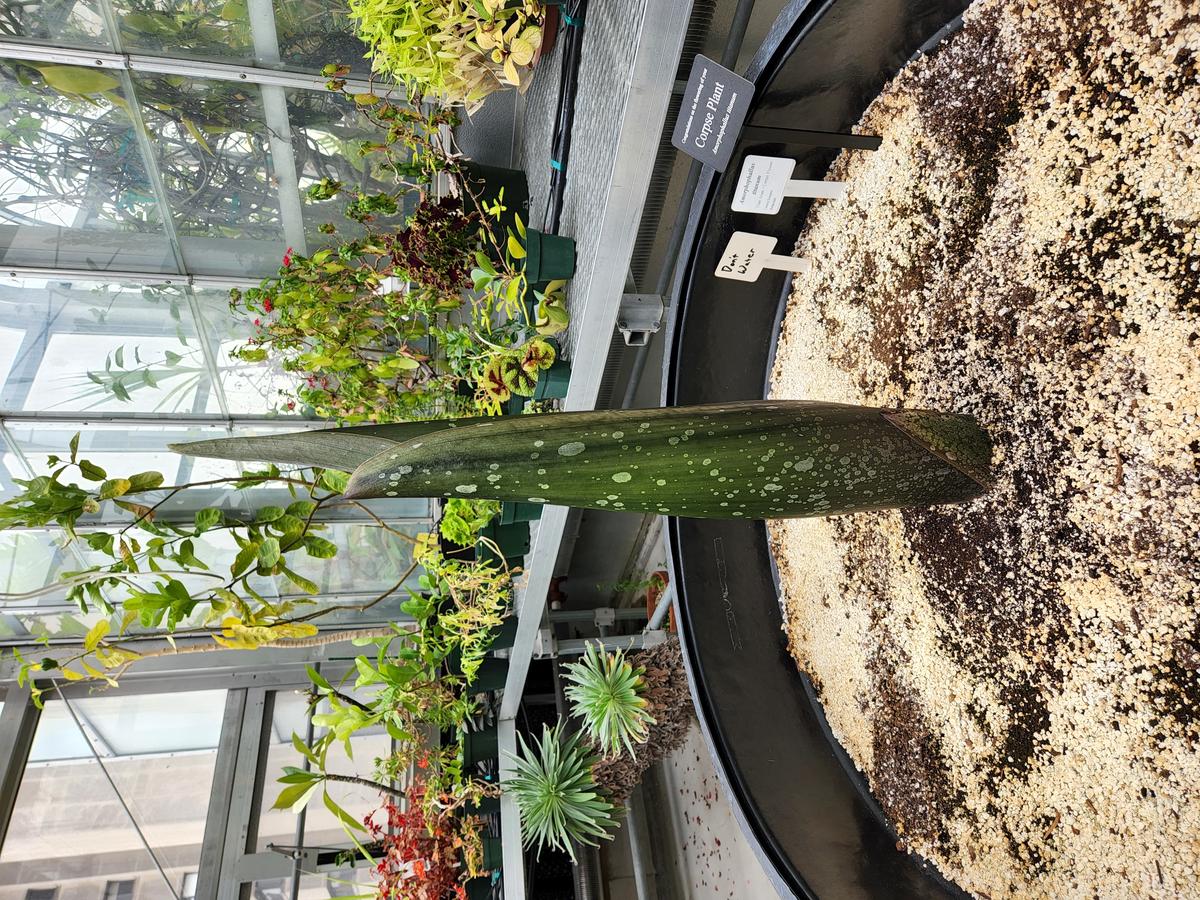 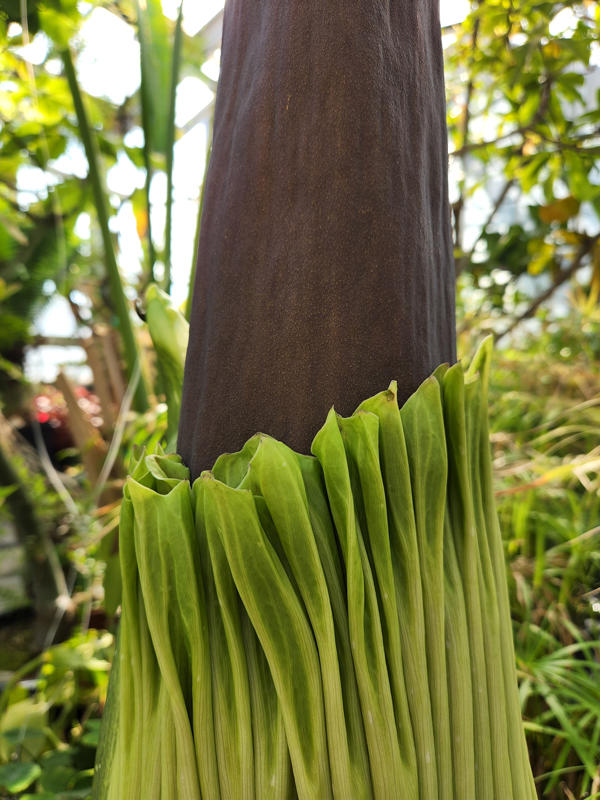 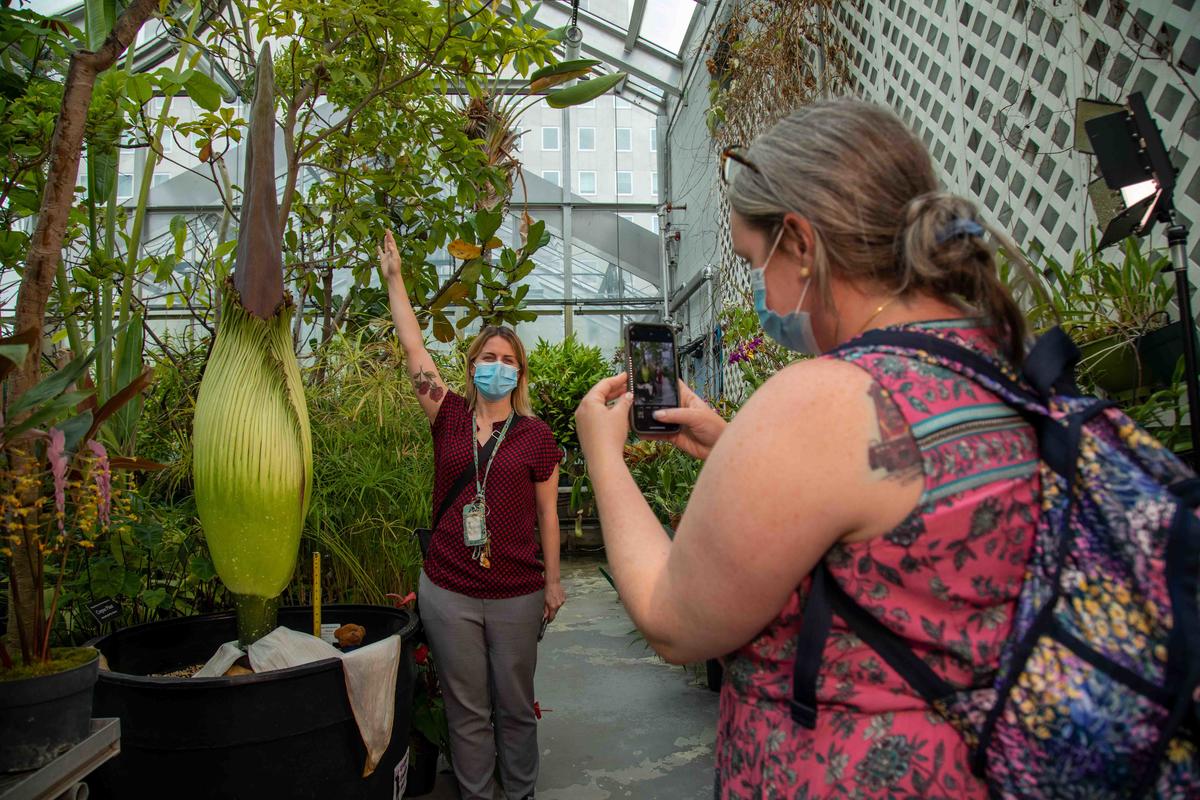 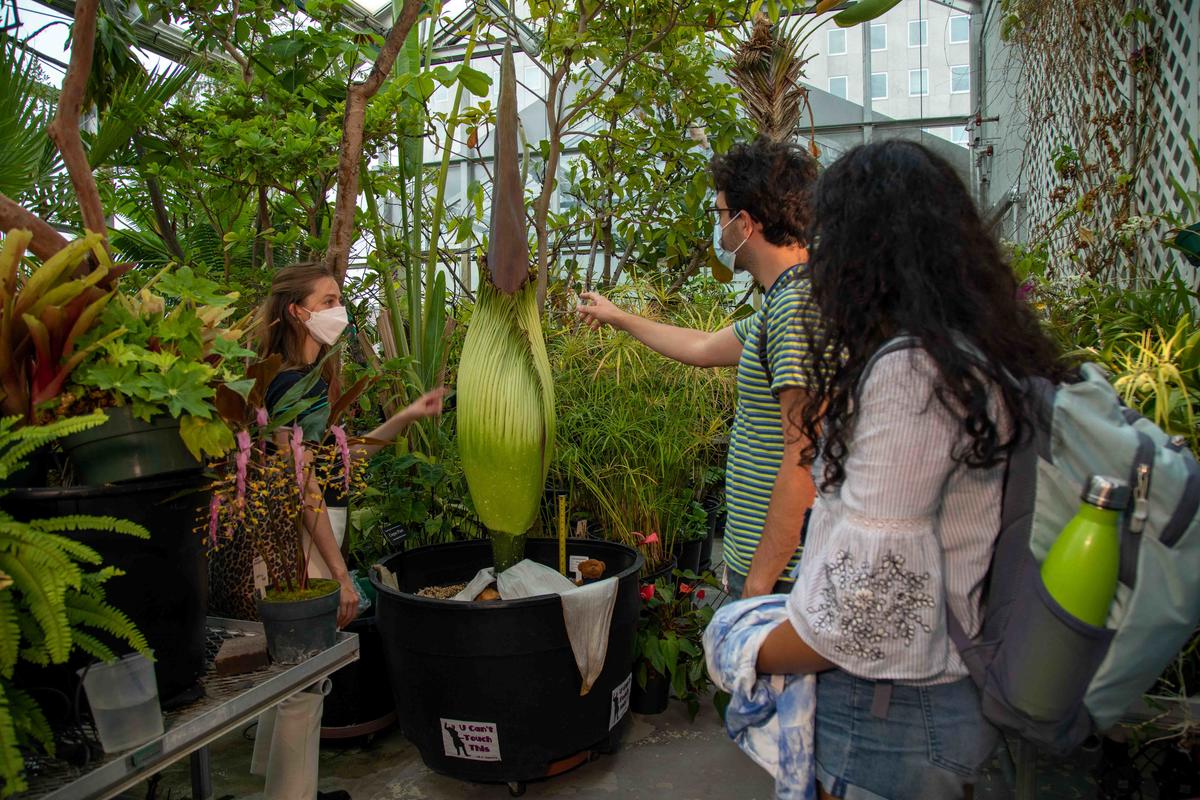 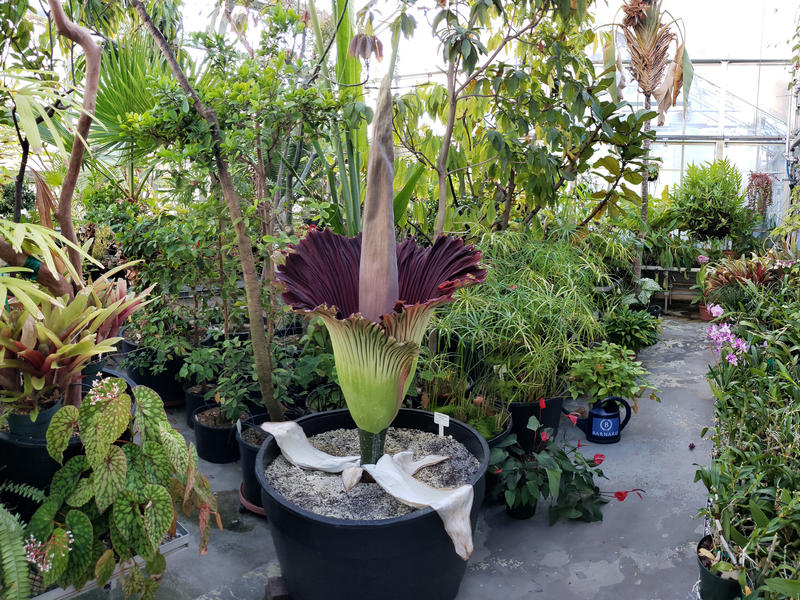