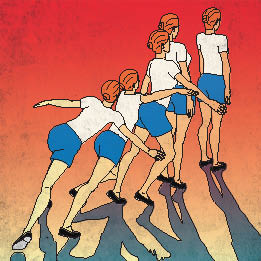 During his first visit to New York City in the late ’90s, Chris Bregler spotted the acclaimed dancer and choreographer Twyla Tharp ’63 on the street, and seized the opportunity. He asked Tharp if she might review a tape of his doctoral work from the University of California, Berkeley, where Bregler had just earned a degree in computer science. His thesis focused on digitally reconstructed motion, using a mathematical algorithm to animate a 3D computer model of a person moving.

Tharp watched the tape. He recalled she then offered her opinion: “Honey, you don’t understand nothing about human movement.”

Bregler can laugh at the memory now. As the director of New York University’s Motion Capture Lab and a computer science professor at NYU’s Courant Institute, he helps industries from Hollywood to healthcare better understand how people move. His work on “motion capture” focuses on the research and animation of human movement. “It started a whole new path in my career,” said a smiling Bregler to the students and alumnae who filled the Held auditorium in September for a presentation moderated by Professor of Dance Paul Scolieri.

Bregler noted, “We are now able to digitally simulate fires and oceans, but we still have no clue about human motion. Some people write out formulas, but unless you are a crazy artificial-intelligence professor at MIT, we are very far away from being able to simulate the brain. We realize we need to work with dancers and choreographers.”

While the entertainment and gaming industries directly benefit from Bregler’s work, the research has many other practical applications. For example, one project explored the relationship between a certain type of gait and the propensity for individuals to develop arthritis. He has also worked with athletes, helping them prevent injuries, alerting them to movements found to be harmful. In a current initiative, Bregler is looking at atypical patterns in a crowd, in an attempt to pick out terrorists.

Bregler’s discussion seemed to waltz effortlessly through diverse worlds, shifting from music to movies, from politics to sports, from early animation to modern dance. The event itself attracted an eclectic audience in line with Bregler’s interdisciplinary approach, including a cross-section of dance and science majors, as well as a sprinkling of alumnae. Among the many varied insights of the evening: Japanese dance is more symmetrical than Jamaican dance; Olympic divers train so that their somersaults are much more graceful above water than below—the judges can view their movements better. The film industry is confronting what Bregler referred to as the “uncanny valley,” in which animated humans look almost exactly like the real thing but miss important nuances, making figures repulsive and frightening to viewers.

The event sparked the sort of conversation that may become more commonplace as Barnard works to embrace new technology more fully, while enhancing the College’s distinctive character as a small liberal arts institution. President Debora Spar launched a committee last year to explore Barnard’s role in the context of the changing landscape of technology and higher education. “How do we use technology to create a better learning experience in the classroom, and all over the world? Some institutions use technology to reach more students; that’s not our goal,” explains Barnard Center for Research on Women Director Janet Jakobsen, who chairs the committee.

In part, Scolieri invited Bregler to speak because of Scolieri’s work on this initiative. “I knew that Professor Bregler’s innovative research would inspire students and faculty to both deepen and expand our conversations about performance studies in the digital age,” says Scolieri. “Dance studies must ask and answer many of the questions surfacing in the interdisciplinary field of movement studies. For instance, ‘How do digital and interactive technologies transform traditional notions and experiences of the kinesthetic?’”

Scolieri was also intrigued by Bregler’s interest in Laban Movement Analysis, a subject Scolieri teaches. “I thought it would be exciting for students to see the many and diverse applications of movement analysis in a range of research and commercial projects,” he said.

Bregler’s recent projects include one for the Department of Defense, which explored crowd behavior during demonstrations; another for The New York Times studied the movements of New York Philharmonic conductor Alan Gilbert; and a joint project with the Times and Laban Movement specialist Peggy Hackney considered the gestures of 2012 presidential candidates Mitt Romney and Barack Obama.

Bregler has also looked at how politicians’ gestures differ around the world. “This is politically incorrect and I love these projects,” he said with a grin, showing a short clip of an aggressive and animated Vladimir Putin, who seemed on the verge of striking viewers. On the other hand, in Bregler’s native Germany, Chancellor Angela Merkel hardly moved at all. “Every once in a while she does this,” said Bregler, moving both hands upward.

In discussing facial expressions, Bregler suggested that “there are textbook sad and happy expressions on faces, and these tend to be similar regardless of whether the species is a dog or a person.” Body language is another story. “It really depends on culture, on upbringing, on physical training.”