Professor Monica Miller is a sought-after style educator who consulted on two projects debuting this August in London.

Clothing has and conveys power [and] is a vehicle to explore the various vectors of identity — race, class, gender, sexuality, nationality — and serves as both an offensive and defensive tool in social, political, and cultural positioning.

When Monica L. Miller says, “‘Fashion’ as a system is very exclusive, while style belongs to us all,” one pays attention. For two decades, the Ann Whitney Olin Professor of English and Africana Studies has been studying Black culture and clothing. Style mavens should read her 2009 award-winning book Slaves to Fashion: The Black Dandy and the Styling of Black Diasporic Identity, which explores the Black dandy from the Enlightenment in England to the contemporary art worlds of London and New York.

“I mostly study and want to talk about Black style — how Black people have used clothing, dress, accessories, sartorial gesture, and wit to say something about who they are and how they want to be perceived and the relationship between materiality, the imagination, and futurity,” said Miller.

This August, Miller’s global reach into the world of style research can be experienced via two art projects out of London: the "Africa Fashion" exhibition, on display at the V&A Museum until April 2023, for which she wrote an exhibition catalog essay about Nigeria’s all-gender clothing label Orange Culture; and the essay “Oh Yeah! Yes! Oh Yeah!: Theaster Gates’ Film A Clay Sermon” for the catalog accompanying the exhibition “Theaster Gates: A Clay Sermon.” (The companion catalog will be available in the U.S. in November 2022.)

Closer to home, Miller is also working on a hip-hop and clothing exhibition with another NYC school. The Museum at FIT will open "Fresh, Fly, and Fabulous: Fifty Years of Hip-Hop Style" next spring (February 8 – April 23, 2023), with consultation from Miller, other academics, and a group of hip-hop fashion legends and designers. “With assistant professor at FIT Elena Romero, I wrote an essay on the color pink in hip-hop fashion that will appear in the book that will accompany the exhibition,” said Miller, who has participated in many symposia related to exhibitions at the museum over the years, including those on “Ivy Style,” “Queer History of Fashion,” and “Black Fashion Designers.” “This has been a fun experience to sit in a room with celebrated designers, talking about Harlem’s Dapper Dan and the old-school labels like Cross Colours.”

Watch Professor Miller in the video below discuss “Pink in African American Music and Culture” at The Museum at FIT’s 20th fashion symposium, from March 2019:

To better understand what researching style looks like from an historic lens and how clothing is presented today, Professor Miller loosens the threads to explain.

What can fashion and clothing tell us about culture, whether it be local, regional, or global? 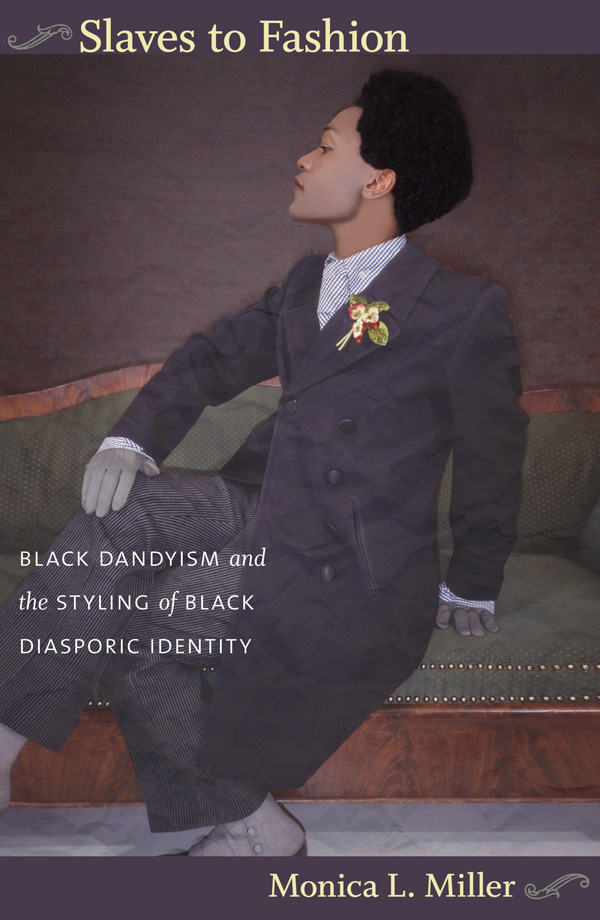 As a cultural historian, I am most interested in what the arts and expressive culture can tell us about actual or imaginative possibilities for self and group expression and liberation. Fashion and dress cultures are a really fantastic way to read and see these possibilities throughout history and also in the present, because they are visual and often fabulous.

For Black people, fashion and dress have been anything but “frivolous” and an important part of a long conversation about Black humanity and worthiness for citizenship. There is a reason the enslaved were stripped of their native dress, entered their new environments naked, and were issued the most basic clothing. Clothing has and conveys power [and] is a vehicle to explore the various vectors of identity — race, class, gender, sexuality, nationality — and serves as both an offensive and defensive tool in social, political, and cultural positioning. In my first book [left], Slaves to Fashion, the cover model, dandy Iké Udé, describes fashion’s power as “not just about form and substance. It is also about the luxurious deliberation of intelligence in the face of boundaries — [a] deliberation that includes the past, happens in the present, and all the while looks forward, beyond.”

Listen to Miller discuss the history of the Black dandy through the 20th and 21st centuries on the podcast Dressed: The History of Fashion, below:

How do you approach the world of fashion and clothing as an academic?

Because I’m trained in literature and African American and Afro-diasporic studies, I approach studying fashion and clothing with at least two [intersectional] lenses or modes: I’m a close reader of both literary, visual, and expressive texts, and I bring to that reading a critical analysis of race, gender, and sexuality. I also think of clothing and dress as an element of (sub)cultural performance and how fashion is embodied — it matters who is wearing what and how, why, and who or what the audience is, such as the self, an in-group, or the mainstream. For me, fashion is also semiotic, a “system” of signs to be deciphered.

I’m most interested in fashion and style as tools for actual or imagined liberation. For example, I always think of the enslaved who literally escaped with their owner’s clothing in order to change clothes as a way to appear free and escape detection. I think of this act alongside the way in which new Harlemites, during the Harlem Renaissance, styled themselves to the nines to broadcast their “New Negro-ness.” I see all of this reflected in celebrated Black designer Kerby Jean-Raymond of Pyer Moss’ recent series of fashion shows called American, Also, which were staged at historic sites important to Black communities, such as Weeksville Culture Center in Brooklyn and Villa Lewaro on Long Island.

Speaking of Pyer Moss, whom you wrote about in a forthcoming essay, what have you learned about the relation between fashion and the literary?

Until recently, fashion studies was only an area of study in art schools, but now it has become a part of history, visual culture, performance studies, and more. I argue that fashion, as a form of vernacular and sometimes “high” expressive culture, has been a powerful form of storying for individuals and communities, for the mainstream, and for myriads of subcultures. For Black people, “fashion design” — sewing, altering, dressmaking, tailoring, styling/in’ — has been a mode of embodied storytelling about and on the self and the race, a way of imagining beyond the “patterns” of Black humanity offered by the colony, the plantation, the factory, or Instagram.

Both formally and informally, “the literary” is an intrinsic part of “fashion,” a process that can begin with an alteration, changing a silhouette, and end on a runway that aims to forward a narrative critical beyond the cohesion of the collection, branding, and the market. For Black fashion designers, “the literary,” the telling of a Black, human story, via the construction of a garment or the mise-en-scène of a show is not just about surviving a deeply racist, exclusionary industry and world but also about creating a way out and over, new knowledge beyond the confines of cut and fit.

How do you bring your fashion research into the classroom for Barnard students, if at all?

Strangely, I have yet to teach a strictly Black fashion and style-based course at Barnard, although all of my classes center around what I generally think of as “performances” of race and other vectors of identity, in which fashion and style play a major part. In the next academic year, after I return from sabbatical, I am looking forward to teaching such a course. Art History’s Anne Higgonet has also asked me to lecture in her Clothing course, which will be a lot of fun.

This summer, my course Harlem Crossroads, which I taught in collaboration with Harlem Stage, focused on African American and Afro-diasporic art and performance in the Harlem Renaissance to the present. We focused on Harlem writer Nella Larsen, a stylish woman whose characters are very much concerned with appearances as they explore the boundaries of race, gender, and sexuality in her novels. One of my students did an amazing final project that was a kind of “mood board” for Larsen’s work, which featured a collage of Black fashion plates depicting the New Negro woman [see below].

What’s next on your fashion plate?

I’m also a consultant for an upcoming exhibition at the New-York Historical Society (NYHS) on legendary illustrator J.C. Leyendecker, best known for his Arrow Collar Man campaign and his hundreds of covers of the Saturday Evening Post in the early 20th century. This exhibition will be in partnership with the new American LGBTQ+ Museum and will focus on the queer dimensions of Leyendecker’s work and life. The NYHS has consulted me to think about the ways in which Black dandyism and representations of Black masculinity in the same period form a counternarrative to and context for Leyendecker’s work during his most active period.

See below for style resources-to-know, from Professor Miller: