Hundreds of excited graduating seniors, family, and friends commemorated the big day at Radio City Music Hall, alongside leaders who have shaped fields in STEM, the arts, and athletics.

The Class of 2022 — one of Barnard’s most resilient — gathered with exceptional leaders in literature, science, the arts, and athletics at Radio City Music Hall on Wednesday, May 18, for the College’s 130th Commencement. Award-winning author, researcher, and entrepreneur Margot Lee Shetterly delivered the keynote address before a cheering audience of 6,000 people — including family and friends, faculty and staff, trustees and alumnae — in celebration of Barnard’s nearly 700 new graduates.

See select photos below from Barnard’s 130th Commencement, with celebrations that began on campus and concluded at Radio City Music Hall: 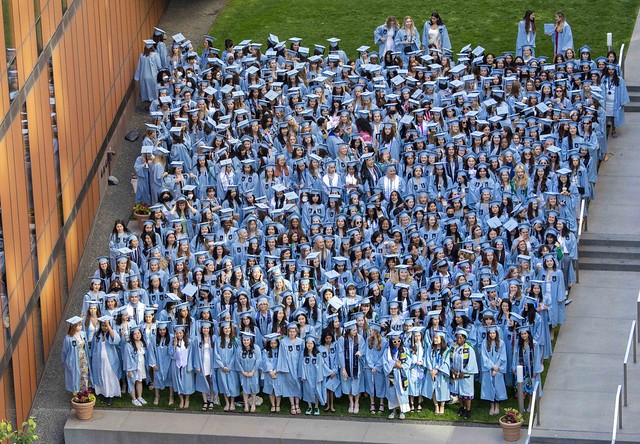 Watch a video below with reflections from seniors:

Margot Lee Shetterly, author of the 2016 New York Times bestseller Hidden Figures: The American Dream and the Untold Story of the Black Women Mathematicians Who Helped Win the Space Race, which was adapted into a critically acclaimed film that was nominated for three Academy Awards, told the packed hall of her delight to share the Medal of Distinction with 2018 Medalist Katherine Johnson, the NASA mathematician whom Shetterly wrote about in Hidden Figures.

“When she co-wrote the research report that laid out the orbital mechanics for [astronaut John] Glenn’s mission, she wrote her name on that report — she was the first woman in her group to get signed credit for her own work. Doing that, she wrote herself into the story of science, and into American history,” said Shetterly. “And that is your job when you leave here today: writing yourself into the story.”

As an advocate for the amplification of stories about women in STEM, in 2014 Shetterly founded the Human Computer Project, a digital archive that tells the stories of NASA’s “human computers,” women from all backgrounds whose work tipped the balance in favor of the United States in World War II, the Cold War, and the Space Race.

In highlighting fierce women from the 20th century, including Johnson and alumna Zora Neale Hurston, Class of 1928, she told the graduates that while they, too, may have experienced bias because of race, gender, or class, they — like many women who came before and who were often overlooked in history — should still reach for the stars. “They took themselves very seriously as mathematicians and women of science, and they had a strong sense of themselves as professionals doing meaningful work. They wrote themselves into the American story. And by writing their history, I was finally able to write my own,” Shetterly shared to a rousing audience.

“Now here you are, waiting to add your chapters to the epic, the way your fellow alumna Zora Neale Hurston did in 1928, when, after earning an associate’s degree at Howard University, she enrolled here, and became this school’s first Black graduate,” Shetterly continued. “The time has come for you to write yourself into the future: of science, of mathematics, of history, of the arts, of statecraft, of whatever it is that is inside of you, and moves you, and will not be suppressed. Never allow the absences and silences to hold you back.” Read the transcript of Shetterly’s keynote address.

Shetterly received the Barnard Medal of Distinction, the College’s highest honor, alongside four other amazing honorees: Allyson Felix, the most decorated American track and field athlete in Olympic history, with 11 medals; Stacey Gabriel, senior director of the Genomics Platform at Broad Institute of MIT and Harvard; Sarah Ruhl, a playwright, essayist, and poet who has been a two-time Pulitzer Prize finalist and a Tony Award nominee; and Jaune Quick-to-See Smith, a visual artist who has had over 50 solo exhibitions around the country and whose work is in museum collections around the world. Read the citations for Shetterly, Felix, Gabriel, Ruhl, and Smith.

See the video, below, featuring personal remarks from the Medalists to graduates:

Barnard President Sian Leah Beilock presided over the ceremony and the presenting of the Medals of Distinction. Addressing the graduates, family, and friends, President Beilock gleefully expressed her joy to celebrate the seniors in person for the first time in three years. “After nearly two and a half years of living through a global pandemic, it’s all the more evident that to make your way to Radio City, ‘student’ was just one of the many roles and identities you successfully took on.”

In praising the graduates for pushing through precarious circumstances that challenged them to take on new roles, President Beilock acknowledged their flexibility and ability to thrive: “What I ask of each and every one of you — to not just nurture multiple selves, but to harness the power you derive from doing so to reshape assumptions, at a societal and even a global level, about who can own what identities.” President Beilock also reminded the audience that the Barnard Year of Science was born from the need to be creative and resilient. Read a transcript of President Beilock’s speech.

Watch the complete Commencement video below:

Additional speakers at Commencement included Provost and Dean of the Faculty Linda A. Bell, who congratulated the Class of 2022 on behalf of Barnard’s faculty. Senior Class President Audrey Pettit ’22 gave the “Charge to the Class of 2022” speech. Melinda Samaratunga ’22 shared academic reflections, and Emma Erenmark ’22 spoke about the senior experience. President Beilock presented SGA president Edidiong Emily Ndiokho ’22 with the Frank Gilbert Bryson Prize and Isabella Rafky ’22 with the Alicia L. Lawrence Memorial Award, which “honors a student who has made significant contributions to the College and who exemplifies Alicia’s values and honors her memory by leading with light and strength.”

Senior Fund Chair Jaelyn Wingard ’22 announced a senior class gift of more than $15,000 with 70% participation, with a matching donation of $3,022 provided by two parents of a current Barnard senior, to support Access Barnard, which provides resources for students who are international, first-generation to college, or low income, along with any student who requests financial assistance for college necessities they can’t afford.

Cheryl Glicker Milstein ’82, P’14, Chair of the Barnard Board of Trustees, told graduates how excited she was to be back in person for Commencement, while also celebrating her 40th Reunion year. "It has been a privilege to watch you grow over the course of your time at Barnard,” said Milstein. “While it has been unconventional, to say the least — interrupted, tumultuous, at times painful and draining — I have watched with complete admiration the ways you have remained engaged in your classes and driven to accomplish your goals, the ways you’ve encouraged one another to stay connected and taken care of one another with deep compassion and empathy.”

Isabelle Eshraghi ’22 and Barbara Chrobak ’22, who delivered remarks at the Baccalaureate Service on Sunday, May 15, at St. Paul’s Chapel, spoke to the importance of coming together and the gift of faith, respectively. “The most important principle of divine philosophy is the oneness of the world of humanity,” Eshraghi said. Chrobak read excerpts from the books of 2 Corinthians and 1 Peter and told her peers to take on the role of “messengers of hope for the world.”