Shetterly, who wrote Hidden Figures, will deliver the keynote address to the Class of 2022 at the College’s 130th Commencement on May 18, 2022.

NEW YORK, March 24, 2022 – Barnard College announced today that Margot Lee Shetterly, author of Hidden Figures: The American Dream and the Untold Story of the Black Women Mathematicians Who Helped Win the Space Race and founder of the Human Computer Project, will deliver the keynote address to the Class of 2022 at Barnard’s 130th Commencement on May 18, 2022. Shetterly will receive the Barnard Medal of Distinction, the College’s highest honor, for her work to spotlight women of all backgrounds who played important roles in scientific history and who have historically been overlooked. Barnard will also award medals to Allyson Felix, the American track and field sprinter; Stacey Gabriel, an American geneticist; and Sarah Ruhl, award-winning American playwright, author, essayist, and professor; and Native American visual artists and curator Jaune Quick-to-See Smith.

Barnard President Sian Leah Beilock will preside over the ceremony, present the degree candidates, confer the Medals of Distinction and address an expected audience of 4,000 family, friends, faculty and staff. The ceremony will begin at 4 p.m. at Radio City Music Hall in New York City.

“The depth and rigor of Ms. Shetterly’s written work has played a critical role in uplifting and recognizing important parts of our history, such as the vital role Black women played in advancing NASA’s space missions,” said President Beilock. “Notably, the late Katherine Johnson, one of the mathematicians featured in Hidden Figures, was a 2018 recipient of the Barnard Medal. It will be a special honor to have Ms. Shetterly be a part of this very momentous occasion, especially as we culminate Barnard’s Year of Science, a celebration of the many contributions women make to STEM.”

Shetterly’s keynote speech will cap off the Barnard Year of Science, a yearlong celebration of all things related to science, technology, engineering, and math (STEM) at the College. Her work as a writer championing STEM stories encapsulates Barnard’s mission to educate scholars across the arts and sciences, and to provide students with interdisciplinary knowledge and skill sets that they can carry beyond Barnard. 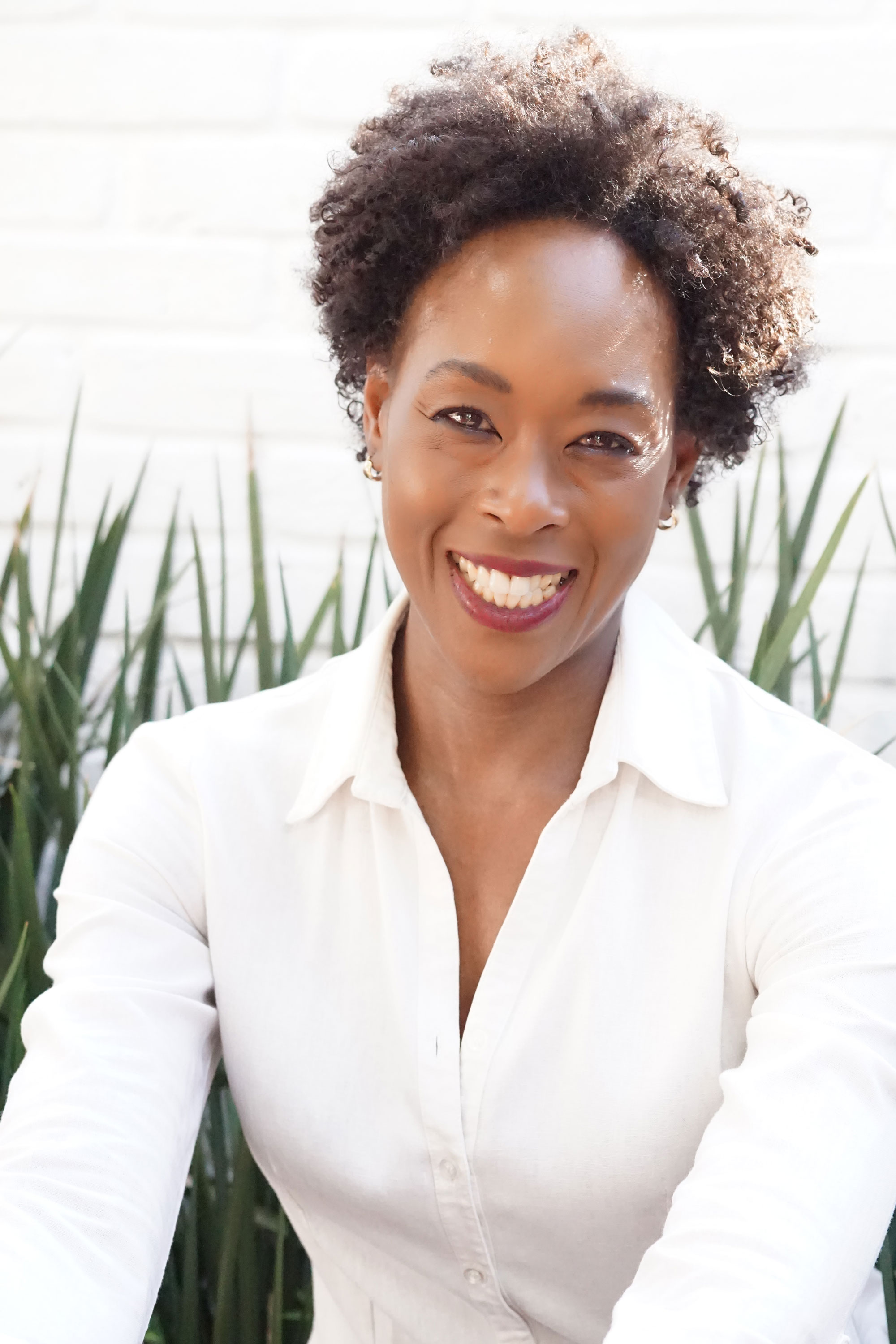 Writer, researcher, and entrepreneur Margot Lee Shetterly is the author of Hidden Figures: The American Dream and the Untold Story of the Black Women Mathematicians Who Helped Win the Space Race, which was a top book of 2016 for both TIME and Publisher’s Weekly, a USA Today bestseller, and a #1 (instant) New York Times bestseller.

The film adaptation of her book — which became the number-one movie in America — stars Taraji P. Henson, Octavia Spencer, Janelle Monae, Kirsten Dunst, and Kevin Costner. It was nominated for the Academy Award for Best Picture and Best Adapted Screenplay, and Octavia Spencer was nominated for Best Supporting Actress. The film introduces viewers to “real people you might wish you had known more about earlier … [who] can fill you with outrage at the persistence of injustice and gratitude toward those who had the grit to stand up against it” [The New York Times]. A television show is also in the works.

Shetterly is also the founder of the Human Computer Project, a digital archive telling the stories of all of NASA’s “Human Computers,” women from all backgrounds whose work tipped the balance in favor of the United States in WWII, the Cold War, and the Space Race. Shetterly’s father was among the early generation of black NASA engineers and scientists, and she had direct access to NASA executives and the women featured in the book. She grew up around the historically black Hampton University, where some of the women in Hidden Figures studied. Her research has been supported by the Alfred P. Sloan Foundation and the Virginia Foundation for the Humanities. She is currently a scholar-in-residence at the University of Virginia, with joint appointments at the McIntire School of Commerce and the School of Engineering. 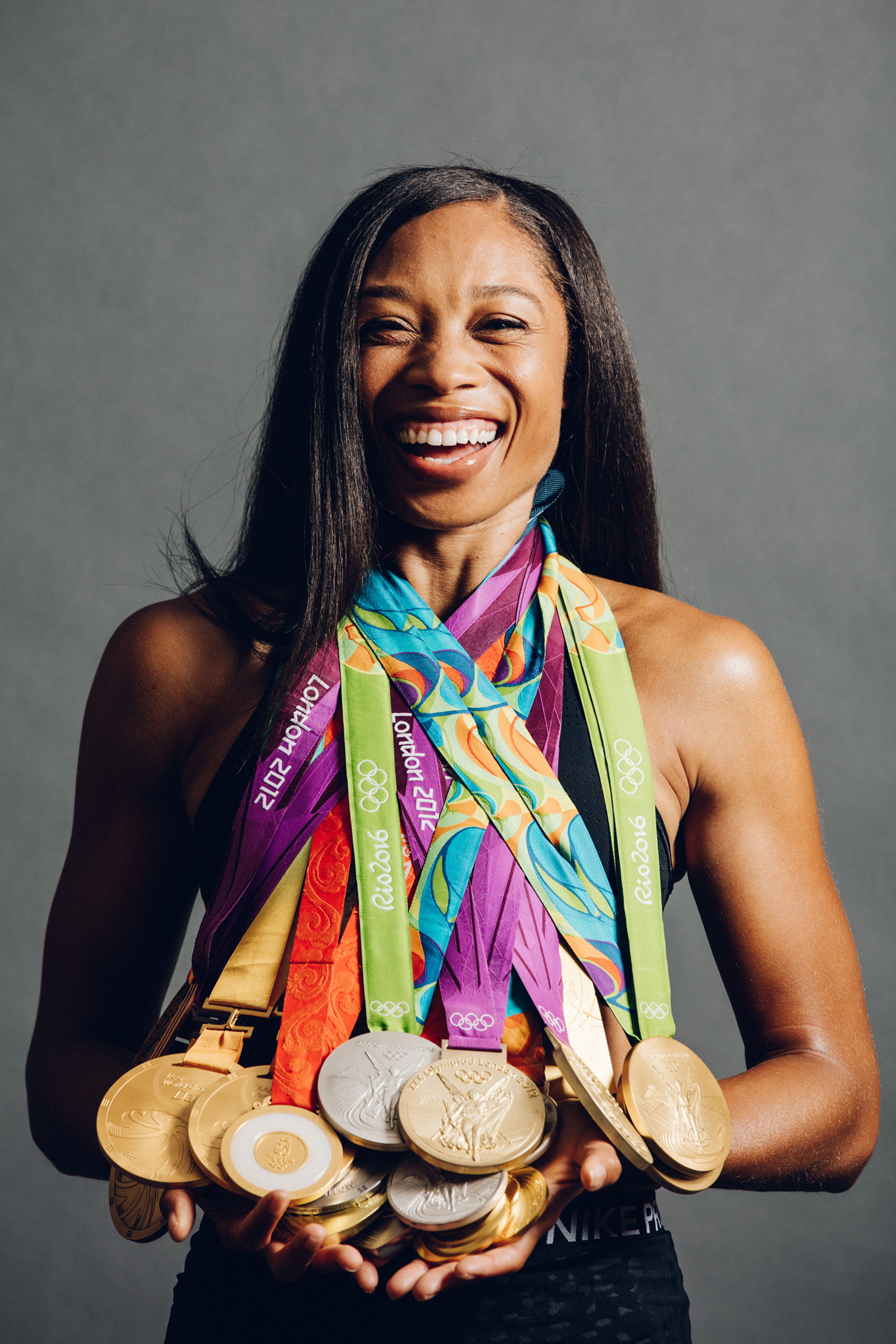 Born on November 18, 1985, Allyson Felix grew up in Los Angeles. Her father, Paul, is an ordained minister who was an excellent sprinter as a teen. She inherited her long legs from her schoolteacher mother, Marlean. Felix followed her older brother, Wes, into the sport, although she did not try out for the track team until her ninth-grade year at Los Angeles Baptist High School in North Hills.

Felix emerged as the new American female sprinter to watch and has never looked back, winning three gold medals in the 2012 London Olympic Games and following that up in 2016 with two more. In 2020, Felix claimed the individual bronze medal and won gold in the women's 4 × 400 meters final. This 11th Olympic medal broke Felix’s tie with Carl Lewis and officially established her as the most decorated American track and field athlete in Olympic history. She has said she intends to retire before the 2024 Olympics in Paris.

A former participant in the U.S. Anti-Doping Agency's “Project Believe” program in 2008, she volunteered again for “Project Believe 2020” to help test an unprecedented sample-collection procedure for athletes during the coronavirus stay-at-home orders. In June 2021, two years after she publicized her contract dispute with Nike, Felix launched her own footwear company, Saysh, and began wearing spikes created by the brand to competitions.

She continues to dig deep and find new goals to motivate and drive her. At this stage of her career, Felix has found passions off the track that she believes are her true calling. She loves children and serves as a member of the board of Right to Play, an international nonprofit whose mission is “to protect, educate, and empower children to rise above adversity using the power of play.” In addition, Felix testified before Congress in an effort to bring awareness to the Black maternal mortality crisis in the U.S. and has joined Athleta — a certified B Corp (earned by focusing on social good as well as profit) — as a professional athlete and activist to continue empowering women and girls through their values and work within their communities. 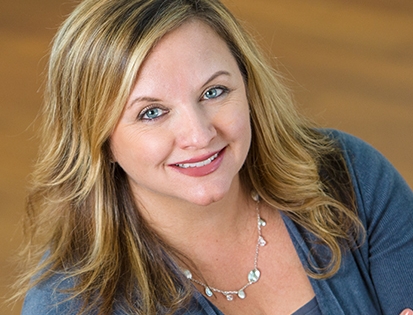 Stacey Gabriel is senior director of the Genomics Platform at Broad Institute of MIT and Harvard, where she is also chief genomics officer and an Institute Scientist. Under Gabriel’s guidance, the Genomics Platform operates as one of the largest sequencing centers in the world and continually explores, validates, optimizes, and implements new technologies, methods, and analysis tools to meet the needs of the Broad community and to drive genomic technologies closer to clinical implementation. Gabriel and the members of her team are committed to pushing the boundaries of the genomic frontier through the application of operational excellence, advanced process design, data analysis and visualization, and technology development capabilities.

In addition to her activities with the Genomics Platform, Gabriel’s research interests lie in using genomic techniques to understand the genetic basis of disease. Since joining the Whitehead Institute/MIT Center for Genome Research in 1998, her work has provided foundational research for the International HapMap Project and she has represented Broad in many large national projects. She has played leadership roles in numerous NIH flagship projects, such as the 1000 Genomes Project, the Cancer Genome Atlas, the National Human Genome Research Institute’s large-scale sequencing center at the Broad Institute, and most recently the U.S. Precision Medicine Initiative, All of Us.  She is also chair of Professional Scientists and serves on the Institute’s Executive Leadership Team.

In response to the COVID-19 pandemic, Gabriel led the development and execution of Broad’s viral diagnostic effort.  The lab rapidly became the largest single testing lab in New England and contributes substantially to national testing numbers. For the work, she was recognized by the Boston Globe as a “Bostonian of the Year” in 2020.

She has been a two-time Pulitzer Prize finalist and a Tony award nominee. Her plays have been produced on and off-Broadway, around the country, and internationally, where they have been translated into over 15 languages. Originally from Chicago, Ruhl received her M.F.A. from Brown University, where she studied with Paula Vogel. She has received the Steinberg Playwright Award, the Samuel French Award, the Susan Smith Blackburn Prize, the Whiting Award, the Lily Award, a PEN award for midcareer playwrights, and the MacArthur Award.

You can read more about her work on www.SarahRuhlplaywright.com. Her two books of poetry are published by Copper Canyon Press, and her collaboration with poet Max Ritvo, Letters from Max, was published by Milkweed. Her book 100 Essays I Don’t Have Time to Write was a Times notable book of the year, and she most recently published Smile, a memoir that was listed by TIME magazine as a must-read book of 2021. She teaches at the Yale School of Drama, and she lives in Brooklyn with her family. 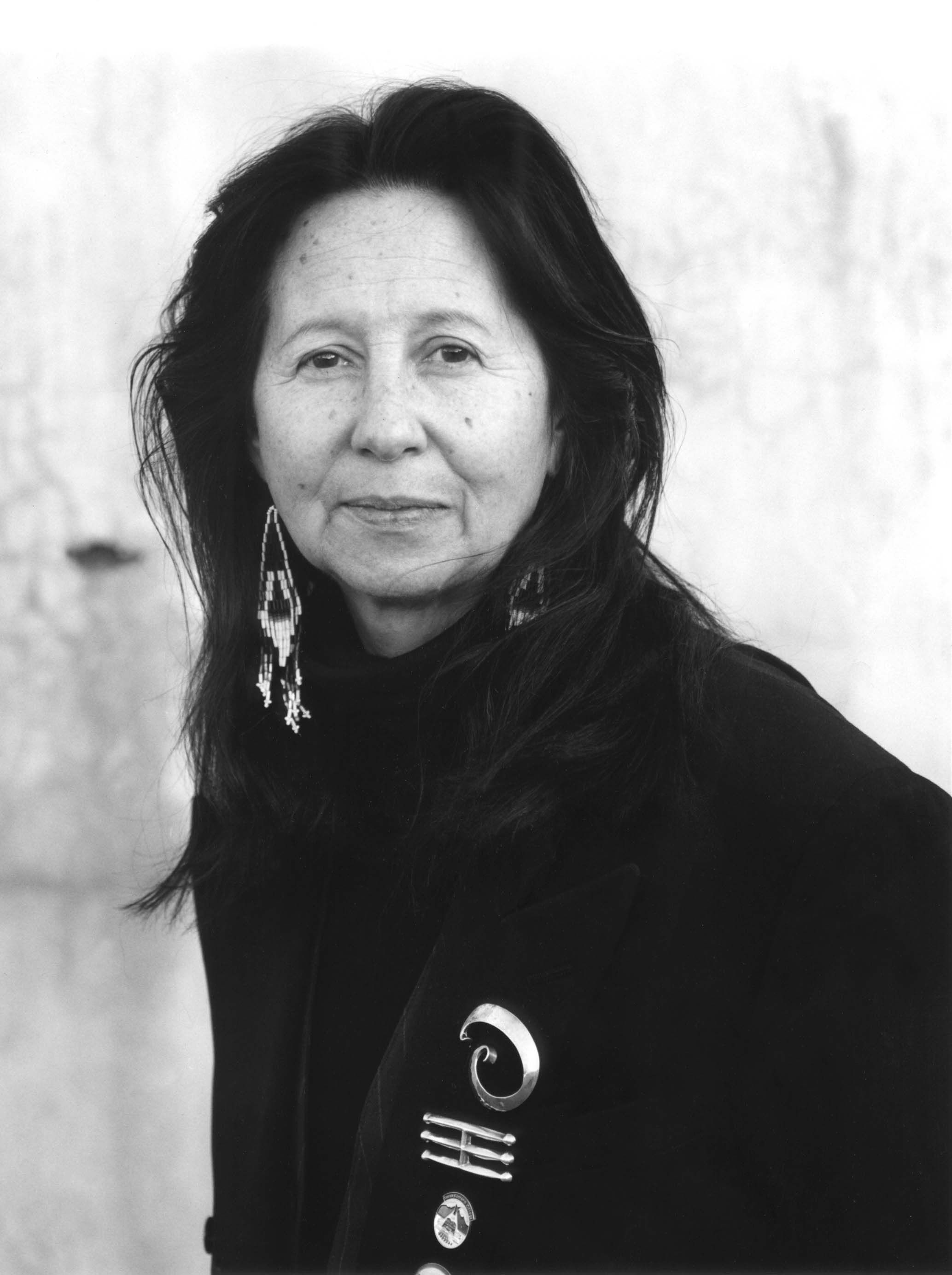 Born in 1940 at the St. Ignatius Indian Mission on her reservation, Jaune Quick-to-See Smith is an enrolled Salish member of the Confederated Salish and Kootenai Nation, Montana. Smith received an Associate of Arts degree at Olympic College in Bremerton, Washington, in 1960, a B.A. in art education from Framingham State College in 1976, and an M.A. in visual arts from the University of New Mexico in 1980. Since the late ’70s, Smith has had over 50 solo exhibitions, including at Kornblee Gallery (1979, New York), Bernice Steinbaum Gallery (1990, New York), Steinbaum Krauss Gallery (1992, 1995, 1998, New York), and Jan Cicero Gallery (2000 and 2002, Chicago). In 2004, the Milton Hershey School Art Museum (Hershey, Pennsylvania) opened “Jaune Quick-to-See Smith: Made in America,” which traveled to Keene State College  in New Hampshire.