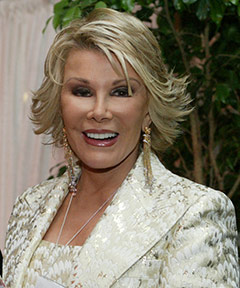 Joan Rivers '54, a trailblazer for women in stand-up comedy and television, passed away Thursday at the age of 81. Following her breakthrough as a guest on “The Tonight Show” with Johnny Carson in 1965, Rivers became a superstar of American late-night televison and later in her career excelled as a writer, producer, and entrepreneur. As Robert D. McFadden writes for The New York Times, "She was one of America's first successful female stand-up comics in an aggressive vein that had been almost exclusively the province of men, from Don Rickles to Lenny Bruce. And she was a role model and an inspiration for tough-talking comedians like Roseanne Barr, Sarah Silverman and countless others."