Founders Day: A Celebration of all that is Barnard

Students, faculty, alumnae, and community members visited Barnard on Sunday, October 26, to celebrate the College's 125th-anniversary year. Special lectures, performances, and activities were held around campus, and as a tribute to Barnard's legacy as a New York City institution, a stretch of Broadway was renamed Barnard Way. The following photo essay brings to life a wonderful day honoring Barnard's history, present, and future. 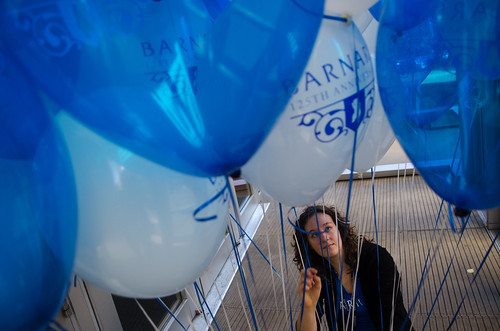 Before the day's official kick-off, President Debora Spar and Dean Avis Hinkson '84 gather with students at the corner of Broadway and West 116th Street for the unveiling of Barnard Way. 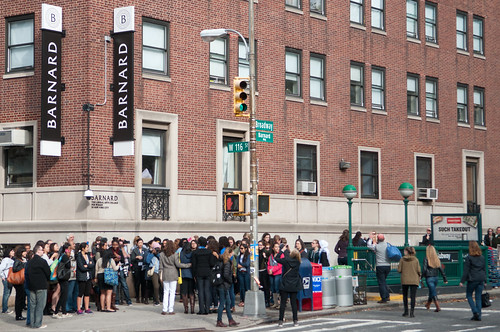 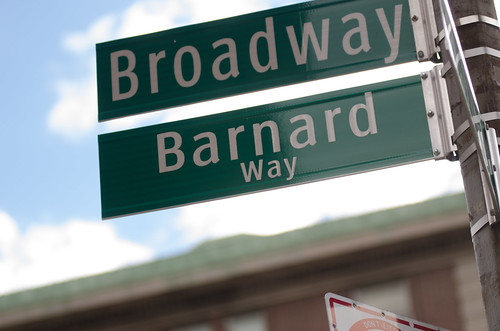 Students pose on the newly named Barnard Way with a large replica of the street sign. 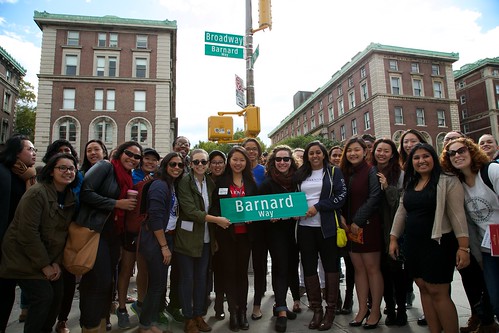 Dean Hinkson '84 captures the moment on her cell phone. 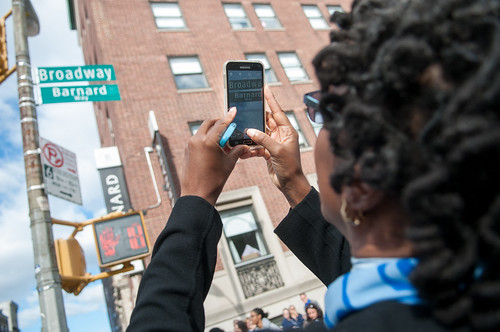 Comedian Regina DeCicco '00 and Haley Schoeck '16 serve as emcees for the day. 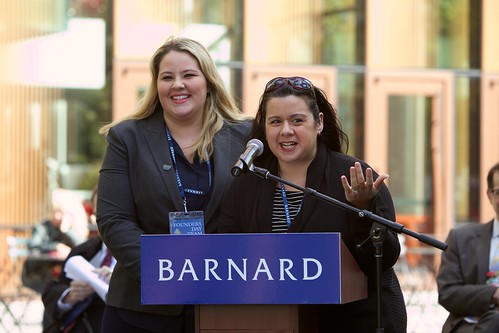 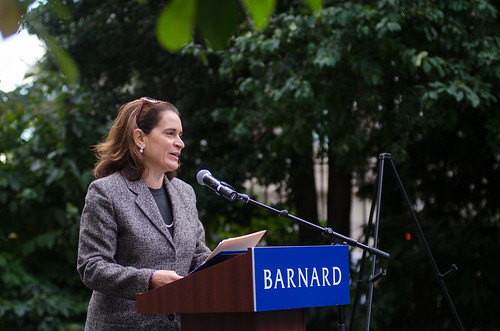 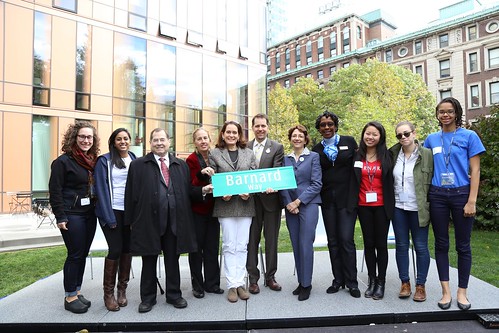 "The embrace of women's colleges and the alumnae they produce has gotten stronger," said NYC Department of Transportation Commissioner Polly Trottenberg '86. 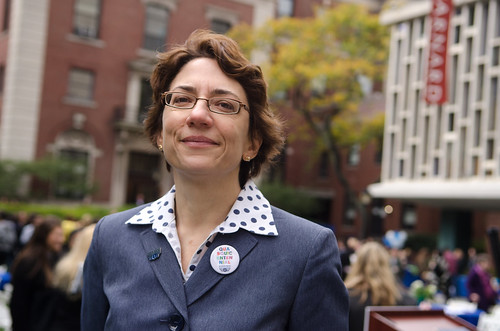 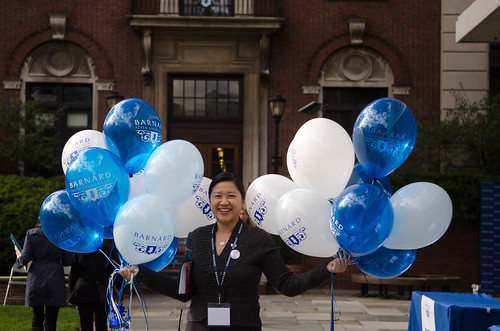 Professor John Magyar leads a science demonstration called Colorful Chemistry, using chemical compounds and combinations to demonstrate some of the lessons students learn in his courses. "It was a fun presentation. He did it in a very magical way, but got the science in there, too," said Kim M. Huffman '02. 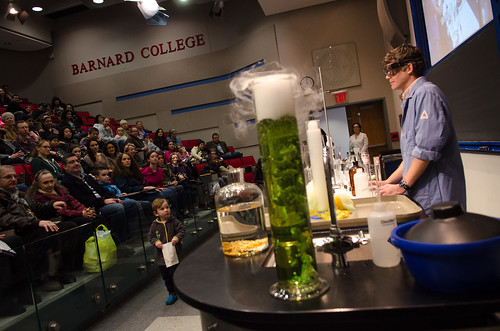 Mary McElroy '15 shows 3-year-old Naomi Fraenkel-Altschul how to hit a volleyball as part of the Physical Education Obstacle Course in LeFrak Gym. McElroy appreciates the strong community at Barnard. "We're going through all this—school and classes and getting ready for the real world—together." 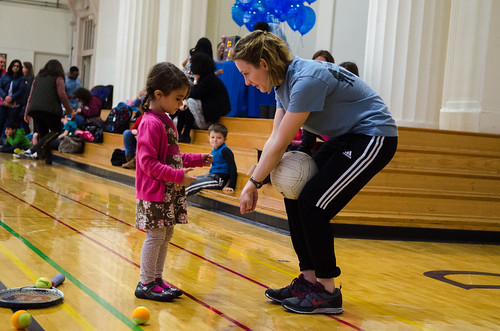 Stephanie Feldman '05 reads an excerpt from her book, The Angel of Losses, during the Alumnae Authors' Reading in Sulzberger Parlor. 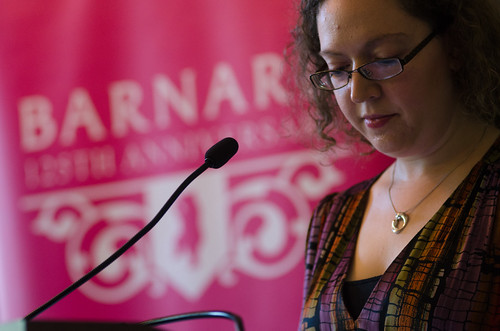 (From left) Anisa Tavangar '18, her father and mother Alex and Homa Tavangar, and her sister, Senior Class President Layla Tavangar '15, pose for a photo. "They're very different, but it's not surprising that they would both go to Barnard," said Homa, the girls' mother. 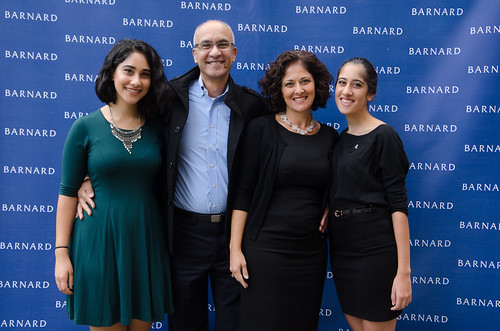 Lamya Vigo, whose aunt is a Barnard student, poses with a Barnard bear. 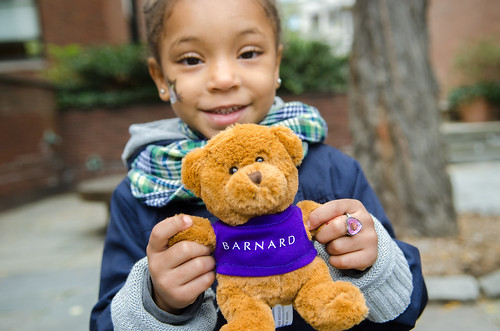 Sandra Goldmark, assistant professor of professional practice in theatre, helps teach 3-year-old Rhonda Salama (daughter of Evelyn Salama '04, not pictured) how to sew as part of a Pop Up Repair workshop. "Being at Barnard lets me cross-pollinate in a way that I couldn't otherwise do," said Goldmark, whose ongoing Pop Up Repair initiative has helped New Yorkers rethink disposing of items that can be repaired. 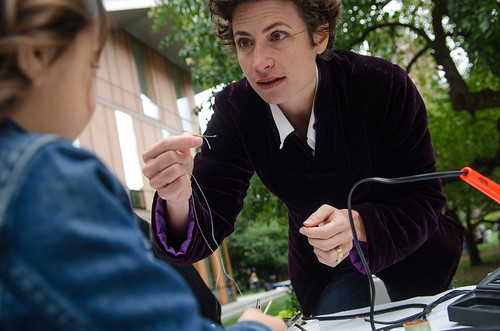 Goldmark's team has also constructed the Trashgadget, pictured below, which illustrates the detrimental effects of consumption and encourages visitors to get involved.

Betty Tam '02 (second from left) and Cindy Young '02 (second from right) pose for a photo with their husbands, Scott Tam and Billy Young. "It's a special place where girls can feel comfortable," said Betty Tam, about Barnard. "It helps build character and community." 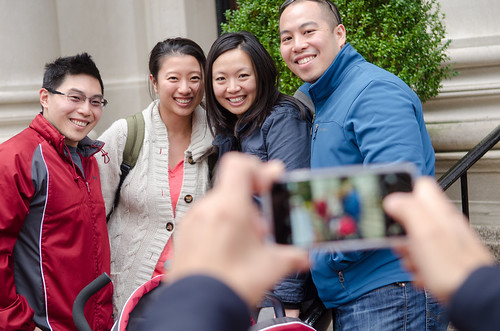 Rebecca Calisi-Rodriguez, an assistant professor of biology who studies animal behavior and ecophysiology, sits down for lunch with her 3-year-old daughter, Carmen, and friend Ian Rubenstein, also 3. "There's a huge issue with bringing women into STEM," she said. "And Barnard is at the helm of keeping women in these fields." 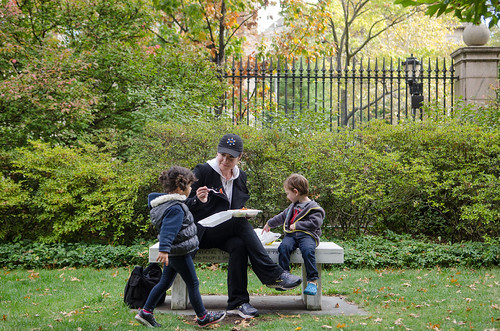 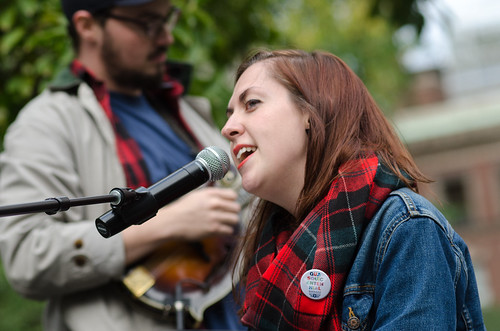 Caleb LoSchiavo '15 reads a poem, previously written by a Barnard alumna as part of the Kilmer Bad Poetry Competition, during a performance by the Philolexian Society. "Philo is mostly just a really silly place, but it gives you a way to talk about more serious issues," said Bella Pori '15, president of the Philolexian Society. 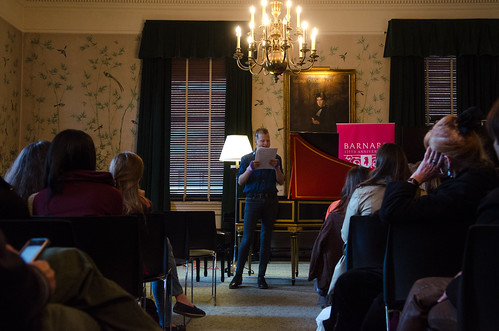 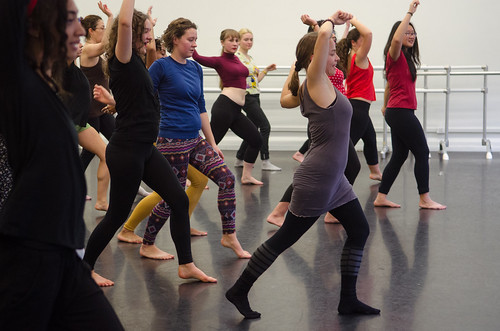 Gabrielle Davenport '15 poses for a photo after the Afro-Cuban dance class. "People are definitely attracted to a school in the city for a reason," she said of attending college in New York City and the variety of ways for students to pursue their interests in the city. "No matter how obscure, there's someone out there who does it." 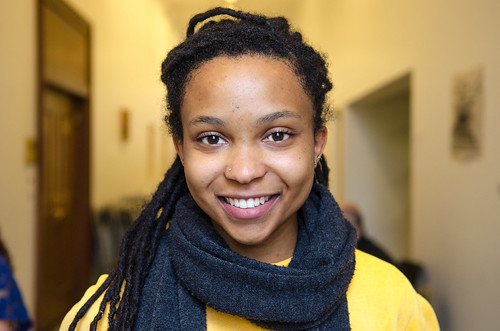 Attendees gather to sing "Happy Birthday" to Barnard as a massive cake in the shape of Barnard Hall, surrounded by a lawn constructed of more than 500 cupcakes, arrives outside the actual building. 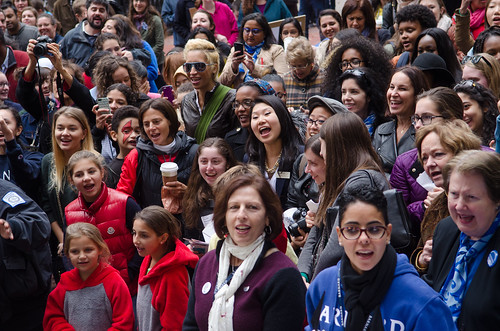 Founders Day ends with the cake cutting ceremony. Cupcakes for everyone! 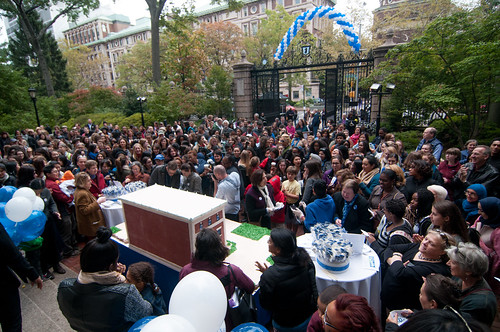 Lauren McGary '18 enjoys her piece of the Barnard Hall cake alongside her father, Kevin McGary. "There's so much to get involved with here at Barnard," she said. As a first year, she has gotten involved with student government and public relations. "It's just the start of the year, but I can't wait to see what else we do." 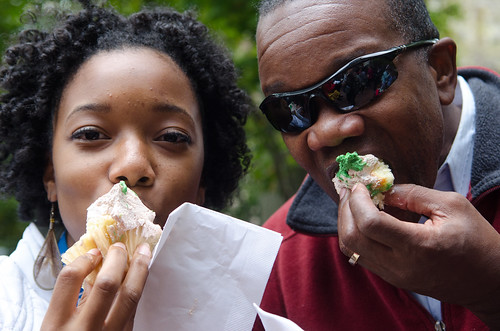 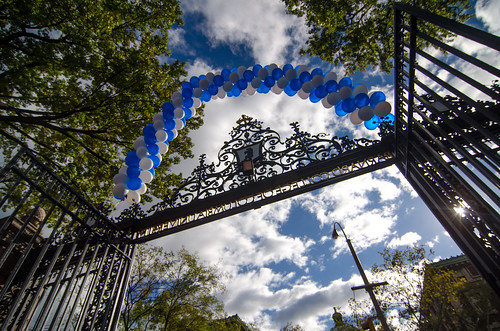 You can flip through this Flipboard Magazine collection of some of the highlights of the day.

You can also view more photos from and get more details about the day.

For more information on this landmark celebration, as well as the events happening throughout Barnard’s 125th anniversary year, visit 125.barnard.edu.