Ambassador Samantha Power, the U.S. Permanent Representative to the United Nations and a celebrated academic and journalist, delivered the keynote address at Barnard's 123rd Commencement on Sunday, May 17, at the Theater at Madison Square Garden, telling students to work to break down "the remaining barriers to true equality."

Power spoke before an audience of more than 5,000 people, including Barnard's 670 graduates along with faculty, trustees, staff, family, and friends.

Power also told graduates that in order to achieve true equality, they will have to battle self-doubt. "True equality will not mean shedding our doubts or self-awareness, but rather not letting them quiet us down when we should be speaking up." She also urged them to strive to learn about underserved members of society and to shine a light on them. "True equality will mean not just seeing the unseen, but also finding a way to make invisible problems visible." Finally, she said that graduates should strive to serve as examples of what women can achieve. "True equality is going to require showing, not telling, people that change is possible....What we look like to the world matters. Because we know, empirically, that people's belief systems and biases can be shifted dramatically by what they see." Read Power's full remarks here.

View photos from the day. 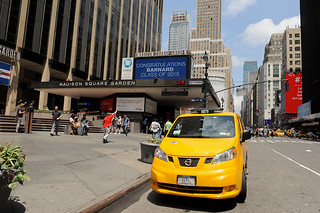 Power also received the Barnard Medal of Distinction, the College’s highest honor, together with three other trailblazers in their fields: Simi Linton, consultant and public speaker whose work focuses on disability and the arts; Nadia Lopez, innovative principal of Mott Hall Bridges Academy, a public middle school in Brooklyn; and Diana Nyad, champion long-distance swimmer and author. Read the citations for Power, Linton, Lopez, and Nyad.

The Medals of Distinction were presented by Barnard President Debora L. Spar, who presided over the ceremony. In her remarks, President Spar told the students, "At moments like this—when we stand in fancy halls and honor extraordinary people—it’s easy to believe that the only way to affect change in the world is to think big; to strive for the most audacious solutions and fight the most important fights. And the world needs people of passion to do exactly that. But the world also needs the quieter types; the introverts; the ones who may choose to address the smaller but urgent problems that surround them: a man who needs a coat. A child who needs a home. A friend who needs a shoulder to cry on. Read a transcript of President Spar's speech.

Additional speakers included Jolyne Caruso-FitzGerald ’81, chair of Barnard’s Board of Trustees and CEO of the Alberleen Group, and Associate Provost Patricia Denison, who spoke on behalf of the faculty. "Barnard students learn together how to view disagreement as a resource rather than an obstacle. Learn how important it is to listen if you wish to be listened to." Senior Class President Layla Tavangar ’15 and Student Government Association President Jing Qian ‘15 delivered speeches to their class. Alexandra Engelberg ’15 delivered the Academic Reflections, and Senior Fund cochairs Delaney Wing ’15 and Nikila Kakarla ’15 announced a multifaceted senior class gift of a tree, as well as the replenishment of the Bear Essentials Fund, which provides startup costs to incoming students who cannot afford basic necessities such as books, supplies, or winter coats. They also announced that 80 percent of the senior class had contributed to a record-breaking gift of $32,142.