Exceptional leaders who have shaped health care, education, fashion, philanthropy, and humanitarian work celebrated the Class of 2017 at Barnard’s 125th Commencement on Wednesday, May 17, at Radio City Music Hall. Dr. Joanne Liu, the international president of Médecins Sans Frontières (Doctors Without Borders) and associate professor of medicine at the University of Montreal, delivered the keynote address before an audience of more than 4,000 people, including Barnard’s 614 graduates along with faculty, trustees, staff, family, and friends. 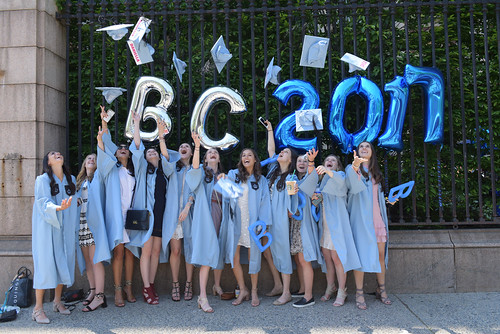 Liu reflected on the lessons of imperfection, sharing her own personal and professional experiences, including her organization’s work in West Africa during the height of the Ebola virus outbreak. She admitted that while Doctors Without Borders was portrayed as heroic for its medical intervention, she was heartbroken by the limited care her organization was able to provide those who suffered. “Certainly, we made some difference for many—but our offering was ultimately imperfect,” Liu told the Class of 2017. “And you too will have to settle for less than perfect. It’s what you do with your imperfections that matter.” She concluded her address by charging Barnard’s graduates to “be proud, live fully in this moment of true achievement. You deserve it. And now get out there and be brilliantly imperfect.”

At a community-wide reception on Tuesday evening, the Medalists spoke about the strength of women, and von Furstenberg noted, “If you doubt your power, you give power to your doubts.”

The Medals of Distinction were presented by Barnard Interim President Robert Goldberg, who presided over the ceremony. In his remarks, Interim President Goldberg charged the Class of 2017 to confront and be engaged in the world, to not sit back and watch—“to be part of the discourse, to raise your voices, to question the status quo.”

Additional speakers included Jolyne Caruso-Fitzgerald ’81, chair of Barnard’s Board of Trustees and CEO of the Alberleen Group, and Provost Linda A. Bell, who offered greetings on behalf of the faculty. Senior Class President Prianka Jhaveri ’17 gave the “Charge to the Class of 2017,” and Sarah Kim '17 was awarded the Frank Gilbert Bryson Prize. Ilana Lehmann ’17 and Molly Lo Re ‘17 offered reflections on the academic and student experiences, respectively. Senior Fund chair Margaux Charmey ‘17 announced a senior class gift of $22,000, 75% of which is going to the Bear Essentials Fund, which provides essential items not covered by traditional financial aid packages. The remaining 25% of the gift will support the newly endowed Ann and Andrew Tisch Scholarship for Refugee Women, which will cover all expenses for the year for a refugee student displaced from an area of conflict.